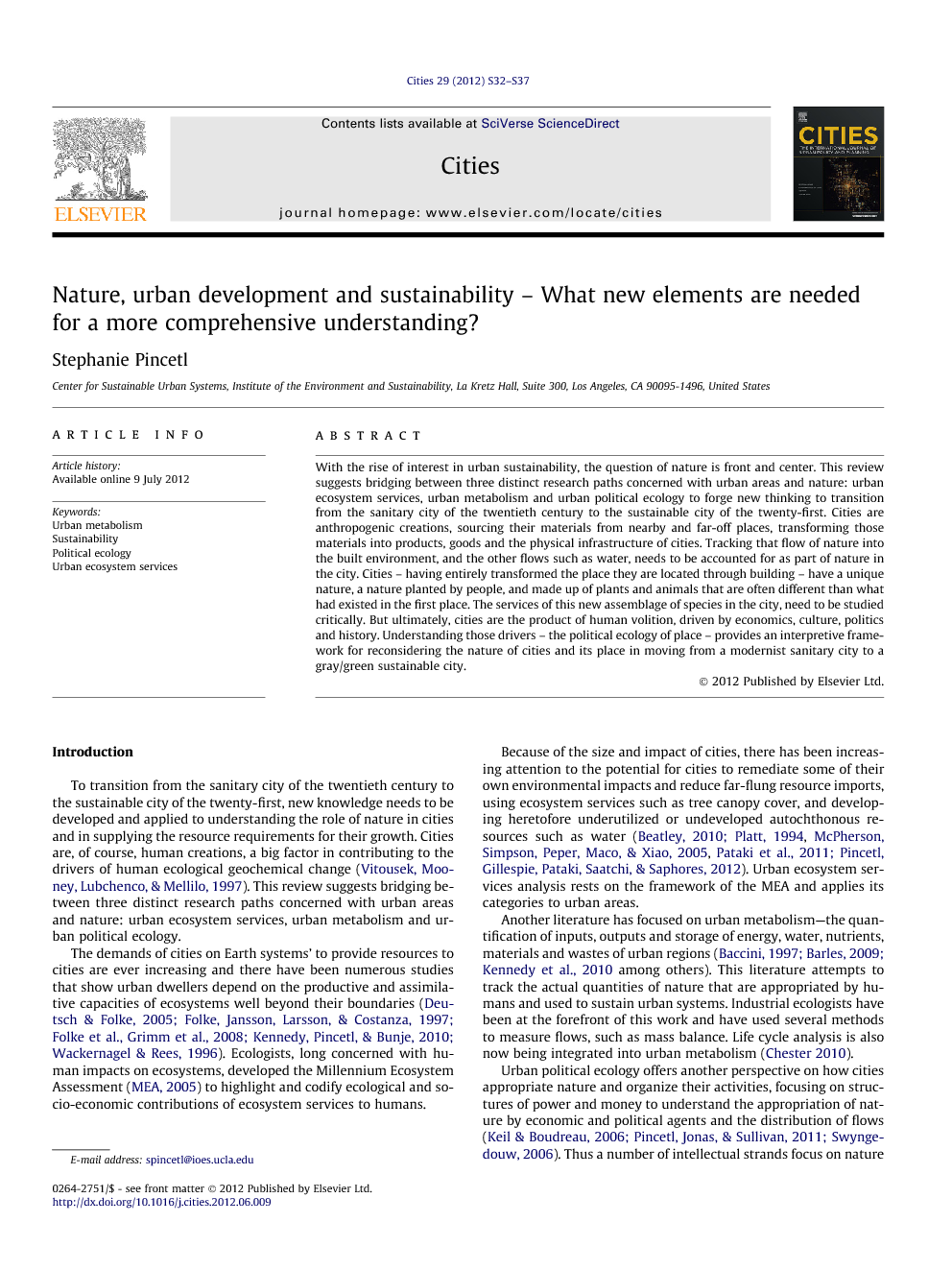 With the rise of interest in urban sustainability, the question of nature is front and center. This review suggests bridging between three distinct research paths concerned with urban areas and nature: urban ecosystem services, urban metabolism and urban political ecology to forge new thinking to transition from the sanitary city of the twentieth century to the sustainable city of the twenty-first. Cities are anthropogenic creations, sourcing their materials from nearby and far-off places, transforming those materials into products, goods and the physical infrastructure of cities. Tracking that flow of nature into the built environment, and the other flows such as water, needs to be accounted for as part of nature in the city. Cities – having entirely transformed the place they are located through building – have a unique nature, a nature planted by people, and made up of plants and animals that are often different than what had existed in the first place. The services of this new assemblage of species in the city, need to be studied critically. But ultimately, cities are the product of human volition, driven by economics, culture, politics and history. Understanding those drivers – the political ecology of place – provides an interpretive framework for reconsidering the nature of cities and its place in moving from a modernist sanitary city to a gray/green sustainable city.

To transition from the sanitary city of the twentieth century to the sustainable city of the twenty-first, new knowledge needs to be developed and applied to understanding the role of nature in cities and in supplying the resource requirements for their growth. Cities are, of course, human creations, a big factor in contributing to the drivers of human ecological geochemical change (Vitousek, Mooney, Lubchenco, & Mellilo, 1997). This review suggests bridging between three distinct research paths concerned with urban areas and nature: urban ecosystem services, urban metabolism and urban political ecology. The demands of cities on Earth systems’ to provide resources to cities are ever increasing and there have been numerous studies that show urban dwellers depend on the productive and assimilative capacities of ecosystems well beyond their boundaries (Deutsch and Folke, 2005, Folke et al., 1997, Folke et al., invited paper, Grimm et al., 2008, Kennedy et al., 2010 and Wackernagel and Rees, 1996). Ecologists, long concerned with human impacts on ecosystems, developed the Millennium Ecosystem Assessment (MEA, 2005) to highlight and codify ecological and socio-economic contributions of ecosystem services to humans. Because of the size and impact of cities, there has been increasing attention to the potential for cities to remediate some of their own environmental impacts and reduce far-flung resource imports, using ecosystem services such as tree canopy cover, and developing heretofore underutilized or undeveloped autochthonous resources such as water (Beatley, 2010 and Platt, 1994, McPherson, Simpson, Peper, Maco, & Xiao, 2005, Pataki et al., 2011 and Pincetl et al., 2012). Urban ecosystem services analysis rests on the framework of the MEA and applies its categories to urban areas. Another literature has focused on urban metabolism—the quantification of inputs, outputs and storage of energy, water, nutrients, materials and wastes of urban regions (Baccini, 1997, Barles, 2009 and Kennedy et al., 2010 among others). This literature attempts to track the actual quantities of nature that are appropriated by humans and used to sustain urban systems. Industrial ecologists have been at the forefront of this work and have used several methods to measure flows, such as mass balance. Life cycle analysis is also now being integrated into urban metabolism (Chester 2010). Urban political ecology offers another perspective on how cities appropriate nature and organize their activities, focusing on structures of power and money to understand the appropriation of nature by economic and political agents and the distribution of flows (Keil and Boudreau, 2006, Pincetl et al., 2011 and Swyngedouw, 2006). Thus a number of intellectual strands focus on nature and cities, coming from different intellectual traditions. This review attempts to build a more unified approach, drawing from each of these separate strands of research to suggest that the complex spectrum of humanly modified nature—from the city to its hinterlands—requires the development of a concept of urban ecosystem services that does the following: integrates the built environment (Moffatt & Kohler, 2008), regards urban ecosystems as novel ecosystems (Francis, Lorimer, & Raco, 2011) for an ecology of the city (Grimm et al., 2008 make a distinction between ecology of the city and ecology in the city), and understands the political and economic ramifications of these flows. The review then points to the elements for this more inclusive theoretical framework to address the relationship of nature and cities.

Two big challenges exist to approaching cities as complex systems. One is that of nature. The shift to acknowledging that cities have their own novel nature – one that humans have had an important impact in creating – seems essential for urban ecosystem science. And beyond that, recognizing that the built environment of cities is nature too, transformed, made from inert substances like sand or minerals, but ultimately resourced from the Earth, is critical to linking the city to hinterlands and to natural processes. Such a view of cities, as a kind of reconstructed nature, may impact how ecology is done in the city, and accounting of the metabolic footprint of urban areas. The second big challenge is to understand how cities reflect human intentionality (whether conscious or unconscious) through rules, conventions, power and money. Human decisions shape and mold cities, they enable or discourage practices and patterns. And using a political ecology theoretical framework, it is possible to understand the structures that frame the processes that drive these decisions, such as transportation funding by the U.S. federal government and the rules about what projects can be financed, or federally financed water systems in the US Southwest and the growth of Southwestern cities. The programs reflect forces with political and economic power. Linking together urban metabolism accounting with a political ecology theoretical analysis is an approach that would shed greater light on how complex urban systems function today, and why. Admittedly this is an ambitious undertaking and requires interdisciplinary collaboration with a common vision – the necessity of making cities more sustainable (reducing their environmental impact, while ensuring an equitable quality of life for people). Fortunately, computational capacity has grown tremendously, so data handling and synthesis is no longer such a hurdle. Integrating resource flow data (traditional urban metabolism metrics) and life cycle cost analysis that can take ecological impacts into account, is beginning to be done (Chester, 2010). Accounting for the embedded infrastructure of cities and integrating that accounting remains a research and data management frontier, but more work is being done on aspects of this, such as the life cycle cost of road infrastructure, or building materials. Urban ecosystem analysis is also, as discussed above, a well developed activity, but has not been coupled to urban metabolism, a reflection of the question of nature, raised above. But integrating measurements of urban ecosystem functions – ecosystem services – in urban metabolism accounting should be feasible. What has been most lacking is interpretation of the city’s metabolism, the why. For example, California passed a radical property tax ballot initiative in 1978 that dramatically reduced property taxes and local revenues. Sales taxes remained untouched. Gradually, localities zoned more and more land for retail uses to increase sales tax revenues, leading to bigger and more automobile malls and big box retail locations, distorting land use as housing was less desirable (Center for Continuing Study of the California Economy, xxxx and Pincetl, 1999). This land use shift had significant impacts on energy and materials flows as it led to housing being located farther and farther into new suburban locations. Coupling policy decisions to urban patterns and energy and materials flows, based on political ecological theory, will allow the identification of critical policy changes for sustainability. Of course no change will occur without public support and political will. The final element in a shift is the popular movement to usher in fundamental change. Information is critical because poor information can lead to unintended consequences, but change does not happen simply on the basis on data and better methods. It requires people, vision and commitment.