عنوان انگلیسی
Are cities the font of innovation? A critical review of the literature on cities and innovation
دانلود فوری مقاله + سفارش ترجمه 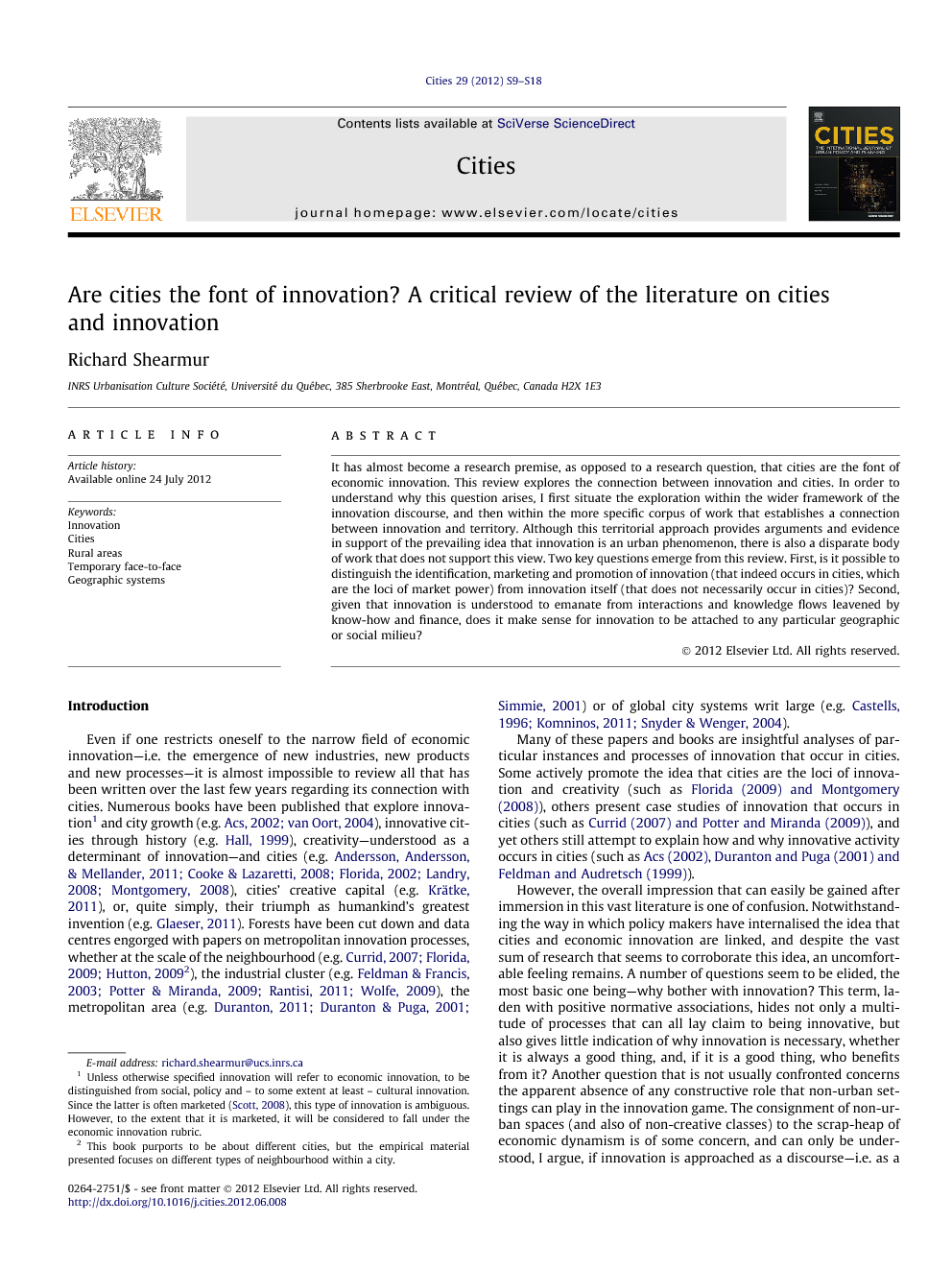 It has almost become a research premise, as opposed to a research question, that cities are the font of economic innovation. This review explores the connection between innovation and cities. In order to understand why this question arises, I first situate the exploration within the wider framework of the innovation discourse, and then within the more specific corpus of work that establishes a connection between innovation and territory. Although this territorial approach provides arguments and evidence in support of the prevailing idea that innovation is an urban phenomenon, there is also a disparate body of work that does not support this view. Two key questions emerge from this review. First, is it possible to distinguish the identification, marketing and promotion of innovation (that indeed occurs in cities, which are the loci of market power) from innovation itself (that does not necessarily occur in cities)? Second, given that innovation is understood to emanate from interactions and knowledge flows leavened by know-how and finance, does it make sense for innovation to be attached to any particular geographic or social milieu?

Even if one restricts oneself to the narrow field of economic innovation—i.e. the emergence of new industries, new products and new processes—it is almost impossible to review all that has been written over the last few years regarding its connection with cities. Numerous books have been published that explore innovation1 and city growth (e.g. Acs, 2002 and van Oort, 2004), innovative cities through history (e.g. Hall, 1999), creativity—understood as a determinant of innovation—and cities (e.g. Andersson et al., 2011, Cooke and Lazaretti, 2008, Florida, 2002, Landry, 2008 and Montgomery, 2008), cities’ creative capital (e.g. Krätke, 2011), or, quite simply, their triumph as humankind’s greatest invention (e.g. Glaeser, 2011). Forests have been cut down and data centres engorged with papers on metropolitan innovation processes, whether at the scale of the neighbourhood (e.g. Currid, 2007, Florida, 2009 and Hutton, 20092), the industrial cluster (e.g. Feldman and Francis, 2003, Potter and Miranda, 2009, Rantisi, 2011 and Wolfe, 2009), the metropolitan area (e.g. Duranton, 2011, Duranton and Puga, 2001 and Simmie, 2001) or of global city systems writ large (e.g. Castells, 1996, Komninos, 2011 and Snyder and Wenger, 2004). Many of these papers and books are insightful analyses of particular instances and processes of innovation that occur in cities. Some actively promote the idea that cities are the loci of innovation and creativity (such as Florida, 2009 and Montgomery, 2008), others present case studies of innovation that occurs in cities (such as Currid, 2007 and Potter and Miranda, 2009), and yet others still attempt to explain how and why innovative activity occurs in cities (such as Acs, 2002, Duranton and Puga, 2001 and Feldman and Audretsch, 1999). However, the overall impression that can easily be gained after immersion in this vast literature is one of confusion. Notwithstanding the way in which policy makers have internalised the idea that cities and economic innovation are linked, and despite the vast sum of research that seems to corroborate this idea, an uncomfortable feeling remains. A number of questions seem to be elided, the most basic one being—why bother with innovation? This term, laden with positive normative associations, hides not only a multitude of processes that can all lay claim to being innovative, but also gives little indication of why innovation is necessary, whether it is always a good thing, and, if it is a good thing, who benefits from it? Another question that is not usually confronted concerns the apparent absence of any constructive role that non-urban settings can play in the innovation game. The consignment of non-urban spaces (and also of non-creative classes) to the scrap-heap of economic dynamism is of some concern, and can only be understood, I argue, if innovation is approached as a discourse—i.e. as a dominant narrative that furthers some interests over others—rather than as an object of economic scholarship.3 From having been an important response to economic upheavals in the 1970s and 1980s, innovation has now taken on the trappings of a narrative which illuminates as much as it can obfuscate. The point of this review is not to grapple with the complex issues of discourse and hegemony, nor to argue that there are no wider social rationales for focussing on innovation: its aim is to assess the empirical evidence and arguments that establish a connection between cities and innovation. However, even such a circumscribed undertaking necessitates a preliminary exploration of the reasons why so much time, effort and public resources are dedicated to innovation, and, why, furthermore, geography is brought into the discussion. For these reasons, I will begin this paper, not by discussing the link between innovation and cities, but by briefly setting out a few ideas that explain why innovation is currently believed to be key to economic growth and prosperity. Indeed, it is this fundamental idea that legitimises much of the current work on how and where innovation occurs. The second part then focuses upon the literature that explores why innovation and cities are thought to be inextricably linked, and also discusses some of the literature which calls into question this idea. The perspective taken in this paper is that the link – if any – between innovation and cities is a particular instance of the connection between innovation and territory: thus, the wider arguments relating to why it is thought that innovation is connected to territory will provide important context. The argument that runs through this critical review is that whilst, of course, some economic innovation occurs in cities and some types of innovation are overrepresented there, innovation can and does occur in non-urban environments, and innovation occurring in cities may be dependent on activities that occur outside of them (and vice versa). If cities are conceived of as temporary congregations of actors with diverse trajectories through time and space (Massey, 2005), then it is in fact difficult, if not impossible, to isolate them as specific sites of innovation. Indeed, the only type of innovation that is specific to cities may well be social and policy innovations devised to tackle specifically urban issues (such as the rising urban inequalities brought about by high remunerations for elite innovation workers: see Krätke, 2011, MacCallum et al., 2009 and Scott, 2008), but this type of innovation is not the subject of the essay.

One of the problems in reviewing the literature on innovation and cities is that it is overwhelming. As each article, book or report is examined, it becomes apparent that innovation is conceived of in a particular way, as is the idea of a city. Many academics are also consultants in this field, and therefore write with an eye on the questions asked by, and on the advice given to, policymakers.7 Furthermore, the empirical identification and measurement of cities and of innovation also tends to differ. Finally, the distinction between invention, initial marketing, and product growth and development is not clearly made. Cities seem to excel in producing radical innovations and in fostering nascent industries. One line of argument, reviewed above, is that it is the local buzz of cities, the capacity they offer for frequent, unplanned, and stimulating face-to-face contacts, that makes this possible. But another line of argument is that cities harbour these radical innovators because they provide the workforce, the infrastructure, and the market access. The first line of argument is the prevailing one whose pedigree stretches from Jacobs (1969) to Glaeser (2011). The second line of argument, which has more robust empirical backing, relies on classic agglomeration theory (Parr, 2002 and Puga, 2010). This theory posits that cities provide a number of cost- and risk-reducing externalities, which may be of more relevance to young industries operating in an uncertain environment, and less so for more established industries and firms. Indeed, Puga (2010) has recently argued that clarification is needed: cost-saving and risk-reducing agglomeration effects are well studied, but the effect of agglomeration on dynamic interactions between local economic actors has not been extensively explored (though it has often been posited). If one concedes to cities their capacity to incubate and foster new industries, largely because of cost and risk-reducing considerations, this still begs the question of whether cities internalise the whole innovation process, which stretches from invention to marketing. There is evidence of innovation in all types of milieus (e.g. Cooke, 2011, MacPherson, 2008 and Petrov, 2011). However, these innovations often only reach their full commercial potential if they are developed and marketed in a large city: thus, at least part of cities’ apparent success in fostering radical innovation may be their capacity to develop and market them, not necessarily their capacity to initiate them. If this is the case, then a somewhat tautological situation arises: cities appear to be key geographic loci of radical innovation because actors located there have the capacity to define what a radical innovation is, and to promote this vision. In other words, cities appear to be loci of innovation because agents with the social and market power to promote them (wherever they were initiated) tend to reside and work in cities (Yeung, 2005). This line of argument is not intended to deny that many innovative products and cultural goods emerge from cities. It does, however, question the popular notion that innovation, even radical innovation and burgeoning new industries, is inevitably an urban phenomenon, and suggests that factors other than interactions and learning, factors such as the social position of agents and their market power (Krätke, 2011 and Scott, 2008), may also explain why innovations are marketed and developed in cities, even if they originate elsewhere. Although the role of social and market power remains understudied in connection to the definition and promotion of economic innovation, current research is questioning, in a variety of ways, the extent to which innovation necessarily emerges in cities. Some of the questions being addressed are: (1) What type of innovation occurs in cities, and what type occurs in non-urban settings (McCann, 2007, Shearmur, 2012a and Shearmur, 2012b)? (2) Do innovations that rely on different types of knowledge require the same type of geographic setting (Asheim and Hansen, 2009 and Spencer, 2011)? (3) How can one distinguish between, on the one hand, the cost-saving and market access aspects of agglomeration, and, on the other, its impact on dynamic interactions (Puga, 2010 and Shearmur, 2012b)? (4) To what extent do firms in cities rely on local interactions in order to innovate, and to what extent do they rely on extra-local interactions ( Bathelt, 2011, Bunker Whittington et al., 2009 and Huber, 2012). (5) To what extent do local institutions and culture facilitate access to extra-local networks for innovation purposes (Fontan, Klein, & Tremblay, 2005)? (6) What role is the Internet, and other communications technologies, playing in altering the way in which local and non-local interactions contribute towards knowledge exchange (MacPherson, 2008 and Moriset and Malecki, 2009)? Another series of questions, beyond the remit of this paper but of critical importance, deal not with the extent to which cities foster innovation, but with who benefits from innovation in the economy, and whether this innovation is necessarily desirable (Krätke, 2011 and Scott, 2008). These questions, often marginalised because innovation has become a key element of the growth discourse, are being raised by critical analysts.