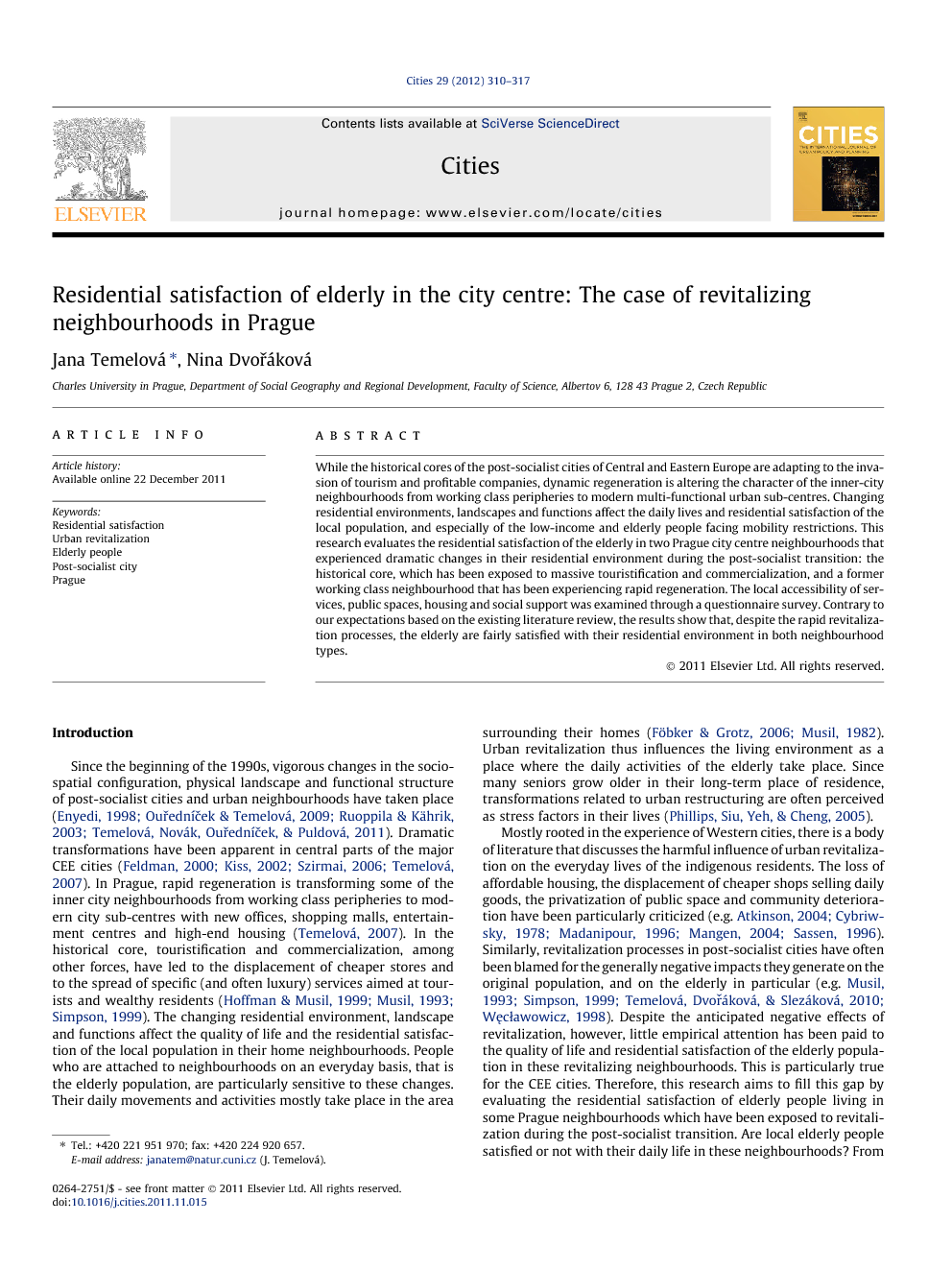 While the historical cores of the post-socialist cities of Central and Eastern Europe are adapting to the invasion of tourism and profitable companies, dynamic regeneration is altering the character of the inner-city neighbourhoods from working class peripheries to modern multi-functional urban sub-centres. Changing residential environments, landscapes and functions affect the daily lives and residential satisfaction of the local population, and especially of the low-income and elderly people facing mobility restrictions. This research evaluates the residential satisfaction of the elderly in two Prague city centre neighbourhoods that experienced dramatic changes in their residential environment during the post-socialist transition: the historical core, which has been exposed to massive touristification and commercialization, and a former working class neighbourhood that has been experiencing rapid regeneration. The local accessibility of services, public spaces, housing and social support was examined through a questionnaire survey. Contrary to our expectations based on the existing literature review, the results show that, despite the rapid revitalization processes, the elderly are fairly satisfied with their residential environment in both neighbourhood types.

Since the beginning of the 1990s, vigorous changes in the socio-spatial configuration, physical landscape and functional structure of post-socialist cities and urban neighbourhoods have taken place (Enyedi, 1998, Ouředníček and Temelová, 2009, Ruoppila and Kährik, 2003 and Temelová et al., 2011). Dramatic transformations have been apparent in central parts of the major CEE cities (Feldman, 2000, Kiss, 2002, Szirmai, 2006 and Temelová, 2007). In Prague, rapid regeneration is transforming some of the inner city neighbourhoods from working class peripheries to modern city sub-centres with new offices, shopping malls, entertainment centres and high-end housing (Temelová, 2007). In the historical core, touristification and commercialization, among other forces, have led to the displacement of cheaper stores and to the spread of specific (and often luxury) services aimed at tourists and wealthy residents (Hoffman et al., 1999, Musil, 1993 and Simpson, 1999). The changing residential environment, landscape and functions affect the quality of life and the residential satisfaction of the local population in their home neighbourhoods. People who are attached to neighbourhoods on an everyday basis, that is the elderly population, are particularly sensitive to these changes. Their daily movements and activities mostly take place in the area surrounding their homes (Föbker and Grotz, 2006 and Musil, 1982). Urban revitalization thus influences the living environment as a place where the daily activities of the elderly take place. Since many seniors grow older in their long-term place of residence, transformations related to urban restructuring are often perceived as stress factors in their lives (Phillips, Siu, Yeh, & Cheng, 2005). Mostly rooted in the experience of Western cities, there is a body of literature that discusses the harmful influence of urban revitalization on the everyday lives of the indigenous residents. The loss of affordable housing, the displacement of cheaper shops selling daily goods, the privatization of public space and community deterioration have been particularly criticized (e.g. Atkinson, 2004, Cybriwsky, 1978, Madanipour, 1996, Mangen, 2004 and Sassen, 1996). Similarly, revitalization processes in post-socialist cities have often been blamed for the generally negative impacts they generate on the original population, and on the elderly in particular (e.g. Musil, 1993, Simpson, 1999, Temelová et al., 2010 and Węcławowicz, 1998). Despite the anticipated negative effects of revitalization, however, little empirical attention has been paid to the quality of life and residential satisfaction of the elderly population in these revitalizing neighbourhoods. This is particularly true for the CEE cities. Therefore, this research aims to fill this gap by evaluating the residential satisfaction of elderly people living in some Prague neighbourhoods which have been exposed to revitalization during the post-socialist transition. Are local elderly people satisfied or not with their daily life in these neighbourhoods? From the elderly point of view, the transformation of neighbourhoods means the loss of familiar environments and the need for adaptation, which can significantly affect everyday lives and independence. In a time of ageing urban populations, the knowledge of their residential perceptions and demands in transforming urban environments is thus a great challenge for age-friendly urban planning and not only in post-socialist cities. The residential satisfaction of the elderly is investigated using case studies of two Prague city centre neighbourhoods: the historical centre of Prague (Prague 1), an area exposed to mass tourism and intense commercial development, and a former working class neighbourhood (central Smíchov) which has been experiencing dynamic commercial and residential regeneration. Building on the concept of residential satisfaction we designed a questionnaire survey to evaluate elderly persons’ perceptions of changing environmental quality. The residential satisfaction of elderly people is discussed against the context of an age-appropriate living environment (e.g. Föbker and Grotz, 2006, Gabriel and Bowling, 2004 and Musil, 1982) and the debate on the social and everyday effects of urban revitalization (e.g. Atkinson, 2004, Beauregard, 1990, Cybriwsky, 1978 and Madanipour, 1996).

Urban populations are ageing and the demand for age-appropriate living environments has become one of the central concerns in social research (e.g. Föbker and Grotz, 2006, Gabriel and Bowling, 2004, Golant et al., 1984, Musil, 1982, Phillips et al., 2005, Sýkorová, 2008 and Temelová et al., 2010). In the CEE countries, the end of state socialism brought a diversification in the life styles of the elderly, as well as in their demands on the residential environment. Several age cohorts of the elderly with markedly different life experiences, physical abilities, attitudes and expectations live next to each other in urban space and differently evaluate the opportunities it offers for them. The equipment and the characteristics of different living environments influence the activity patterns of the elderly. Urban scholars generally agree that city centres offer good preconditions for an independent and active lifestyle in older age thanks to the proximity of facilities, walkable distances and density social contacts. The urban restructuring initiated by the political and economic changes of the 1990s in post-socialist cities, however, raises concerns about the quality of life of the elderly and low-income households in the city centres. Although many of the negative effects of revitalization may derive from the Western experience, the context of post-socialist cities is specific in the timing, speed and complexity of the changes that have been transforming the urban neighbourhoods. This article discussed the residential satisfaction of the older residents in the two types of neighbourhoods in the city centre of Prague, historical core (Prague 1) and former working class neighbourhood (central Smíchov), which have been undergoing a remarkable revitalization during the last two decades. Two city centre neighbourhoods undergoing various revitalization processes (touristification, commercialization, property-led regeneration, etc.) and experiencing different changes in their residential environments were examined. Access to stores and services, public space and safety issues, local social support, and housing affordability were among the main concerns discussed in relation to the satisfaction of elderly people in the city centre of Prague. Generally the elderly perceive the residential environment in both the historical core of Prague 1 and in the former working class neighbourhood of Smíchov fairly positively. However, he the results do show some disparities in particular aspects of residential satisfaction in the two neighbourhoods. Commercialization and touristification promote the specialization of city centre retailing, which is reflected in the older residents’ dissatisfaction with higher prices and the loss of basic supply resources (mainly grocery stores) in Prague 1. On the other hand, the construction of new shopping malls in Smíchov has brought cheaper supermarkets to the area, which has become popular shopping destinations for the elderly. This puts into question the common assumption of the necessarily negative impacts of regeneration on the availability of affordable shopping and service infrastructure in the vicinity of elderly people’s residences. On the contrary, balanced regeneration brings not only “exclusive projects”, but also new and accessible functions to the neighbourhoods, which can enhance the accessibility of daily facilities for local population. Although some critical areas of the elderly residential satisfaction were identified, it seems that they manage to carry out the everyday activities of living despite the remarkable transformation of the residential environment in the city centre of post-socialist Prague. The anxiety about the dramatic deterioration of elderly people’s quality of life in the context of market forces and related revitalization processes did not appear too drastic and, generally speaking, the elderly residents seem to be relatively satisfied in the city centre of Prague. On the other hand, the lesser accessibility to daily facilities in Prague 1, together with lower residential satisfaction in other spheres (particularly weaker certainty of neighbour’s social support and lower night-time safety), suggest a deeper impact of the post-socialist condition on the elderly residing in the historical core of Prague 1 and their higher exposure to relocation urgency. Although the impacts of neighbourhood revitalization have not drastically reduced the quality of life of the local elderly so far, certain findings of this research indicate potential risks for the future, such as, for example if the intensity of the restructuring escalates and the new functions completely take over the space. After the period of relatively unregulated development in Prague’s city centre, a responsible attitude on behalf of local government is required. It should enforce sensitive regulation mechanisms to maintain the existing fragile balance between the new activities and the needs of elderly residents. The results of the study have a more general relevance. Not only Prague, but the city centres of CEE cities in general have regained their central business functions during post-socialism, which has been linked to remarkable transformations in their residential environments. It is reasonable to believe that these changes influence the everyday lives of the older residents in other CEE city centres in similar ways and push for adaptations to their daily routines and habits. Moreover, the rootedness of the elderly is strengthened by many years spent in the neighbourhoods and thus a desire for relocation is not likely (not to speak of the financial and physical restrictions). With the ageing of the urban cores, local governments are responsible to consider the needs and concerns of the elder generations in planning and governance in order to build inclusive cities and communities across post-socialist Europe.