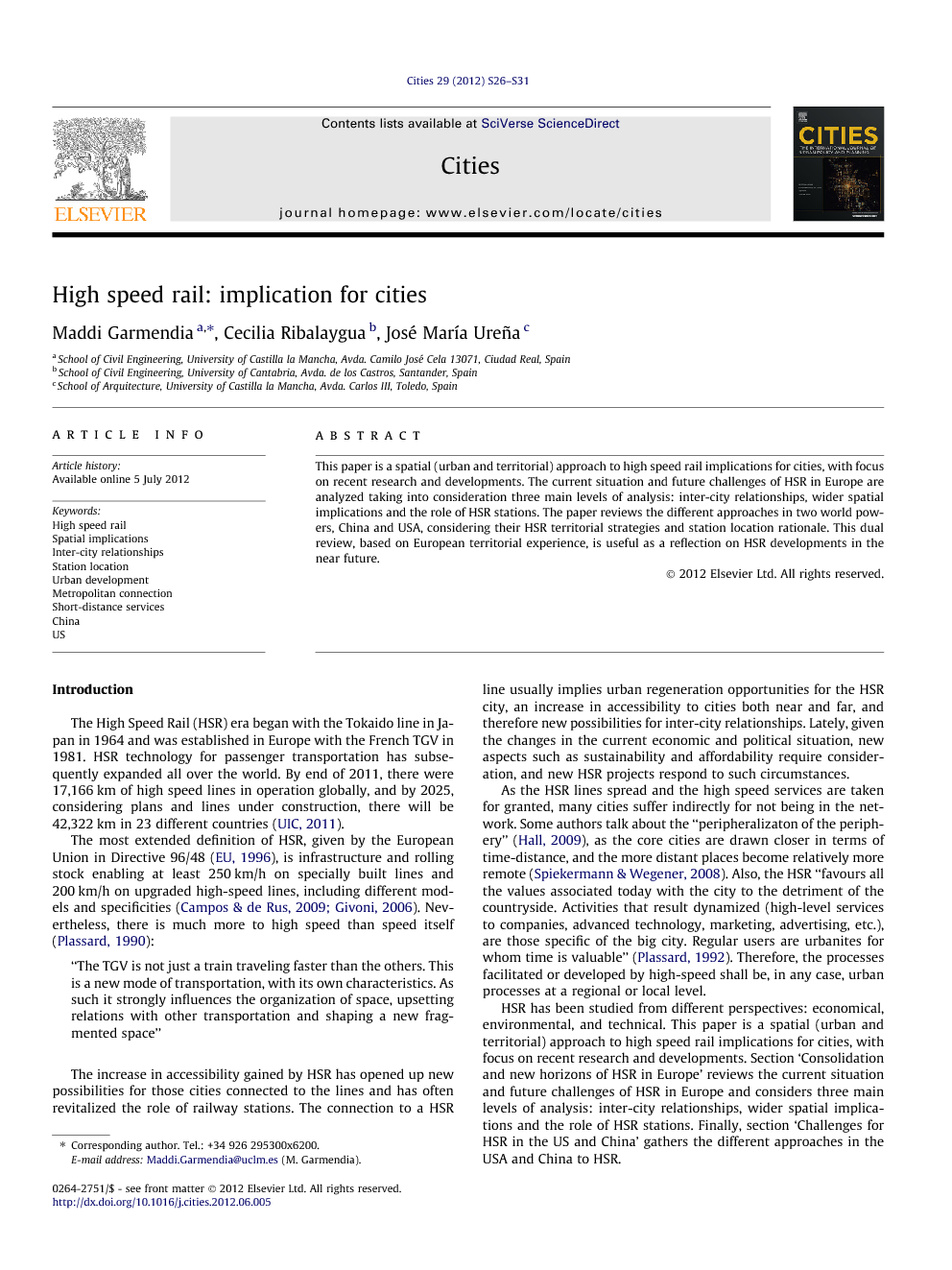 This paper is a spatial (urban and territorial) approach to high speed rail implications for cities, with focus on recent research and developments. The current situation and future challenges of HSR in Europe are analyzed taking into consideration three main levels of analysis: inter-city relationships, wider spatial implications and the role of HSR stations. The paper reviews the different approaches in two world powers, China and USA, considering their HSR territorial strategies and station location rationale. This dual review, based on European territorial experience, is useful as a reflection on HSR developments in the near future.

The High Speed Rail (HSR) era began with the Tokaido line in Japan in 1964 and was established in Europe with the French TGV in 1981. HSR technology for passenger transportation has subsequently expanded all over the world. By end of 2011, there were 17,166 km of high speed lines in operation globally, and by 2025, considering plans and lines under construction, there will be 42,322 km in 23 different countries (UIC, 2011). The most extended definition of HSR, given by the European Union in Directive 96/48 (EU, 1996), is infrastructure and rolling stock enabling at least 250 km/h on specially built lines and 200 km/h on upgraded high-speed lines, including different models and specificities (Campos and De Rus, 2009 and Givoni, 2006). Nevertheless, there is much more to high speed than speed itself (Plassard, 1990): “The TGV is not just a train traveling faster than the others. This is a new mode of transportation, with its own characteristics. As such it strongly influences the organization of space, upsetting relations with other transportation and shaping a new fragmented space” The increase in accessibility gained by HSR has opened up new possibilities for those cities connected to the lines and has often revitalized the role of railway stations. The connection to a HSR line usually implies urban regeneration opportunities for the HSR city, an increase in accessibility to cities both near and far, and therefore new possibilities for inter-city relationships. Lately, given the changes in the current economic and political situation, new aspects such as sustainability and affordability require consideration, and new HSR projects respond to such circumstances. As the HSR lines spread and the high speed services are taken for granted, many cities suffer indirectly for not being in the network. Some authors talk about the “peripheralizaton of the periphery” (Hall, 2009), as the core cities are drawn closer in terms of time-distance, and the more distant places become relatively more remote (Spiekermann & Wegener, 2008). Also, the HSR “favours all the values associated today with the city to the detriment of the countryside. Activities that result dynamized (high-level services to companies, advanced technology, marketing, advertising, etc.), are those specific of the big city. Regular users are urbanites for whom time is valuable” (Plassard, 1992). Therefore, the processes facilitated or developed by high-speed shall be, in any case, urban processes at a regional or local level. HSR has been studied from different perspectives: economical, environmental, and technical. This paper is a spatial (urban and territorial) approach to high speed rail implications for cities, with focus on recent research and developments. Section ‘Consolidation and new horizons of HSR in Europe’ reviews the current situation and future challenges of HSR in Europe and considers three main levels of analysis: inter-city relationships, wider spatial implications and the role of HSR stations. Finally, section ‘Challenges for HSR in the US and China’ gathers the different approaches in the USA and China to HSR.

In the last 30 years HSR technology for passenger transportation has expanded all over the world. In Europe, it is well established, but still new challenges and questions remain unresolved, either in relation to the consolidation of a European HSR network (interoperability, cross-border services, national rationales, etc.) or to the evolution of the model. On the territorial level two phenomena get most of the scholarly attention: new inter-city relationships and wider spatial implications of HSR. Among the former, very long distance relationships (related mainly to international services) and short distance relationships (which have revolutionized the concept of HSR) are described. In some cases, the HSR has been directly conceived for short or medium distances. However, in other cases, they constitute an unexpected result or an adaptation of the initial model. On the local level, the focus is on the way the station serves the city, both for the resulting level of service of the HSR and for the future of the cities in terms of development (new urbanized areas, airports, local transportation systems and so forth). Anyhow, most of the literature is built upon different case studies which makes comparison a difficult task. A systematic and homogeneous analysis on a large number of cities would allow wider understanding on the territorial impact of HSR services and on the role of HSR stations. Specifically, the real utility of HSR for different purposes (commuting, business or tourism) has not been studied in a systematic way. Outside Europe, two different approaches to HSR are contrasted: the US and China. The newly established Chinese network and the approaches in the US respond to a different rationale on the relationship between stations and territory, which is revealed in the location of the stations. While previous experience leads the Americans to exploit the full potential of the station as a place, as driving forces of urban and territorial development, the Chinese go for large nodes that, although they will have an inevitable impact on the territory, are essentially transport interchanges designed to ensure efficient mobility. Both roles of the HSR stations (node and place) are still to be exploited to the maximum by HSR cities and this matter will still be in the center of the discussion of their strategies in the near future.