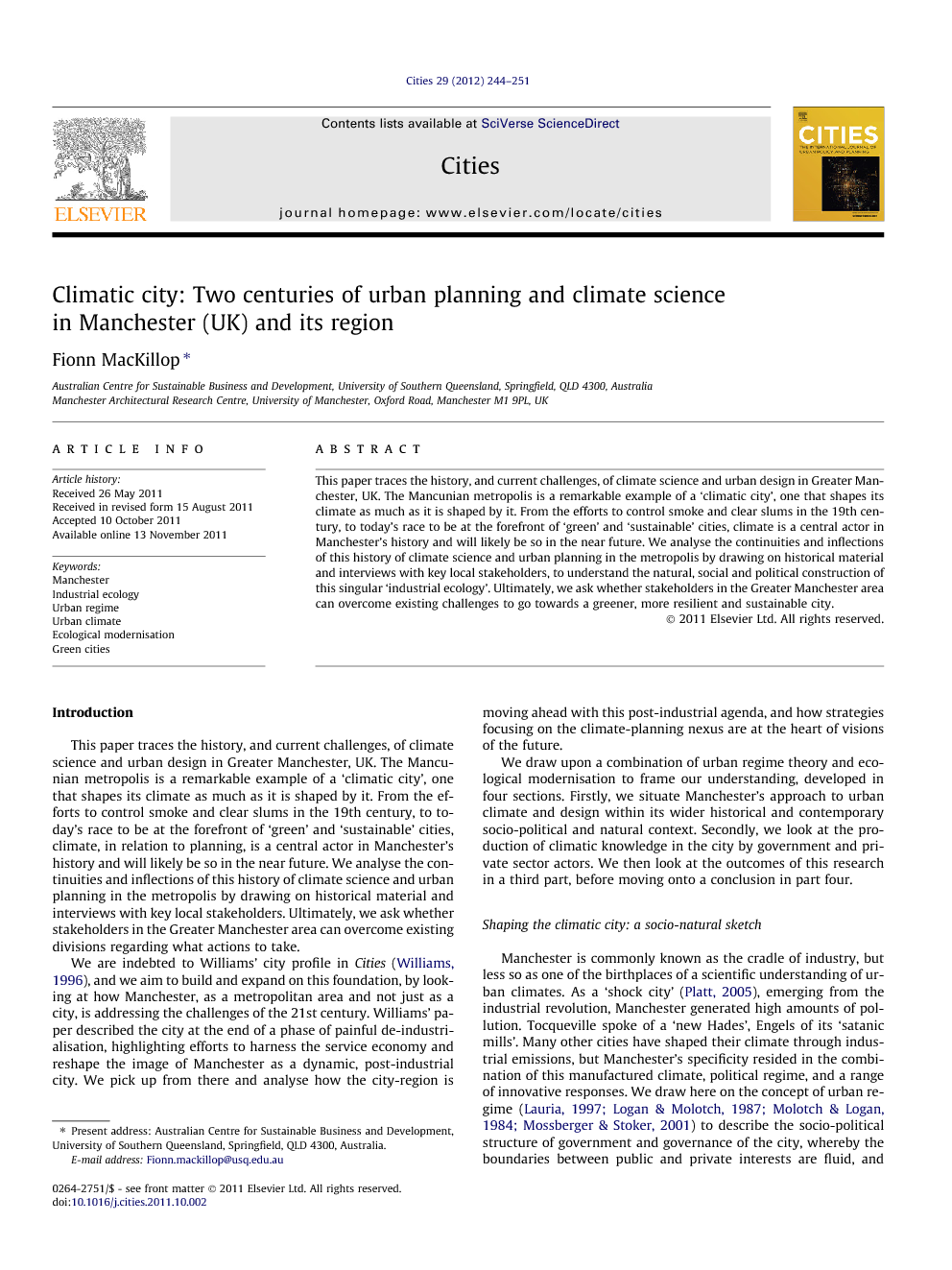 This paper traces the history, and current challenges, of climate science and urban design in Greater Manchester, UK. The Mancunian metropolis is a remarkable example of a ‘climatic city’, one that shapes its climate as much as it is shaped by it. From the efforts to control smoke and clear slums in the 19th century, to today’s race to be at the forefront of ‘green’ and ‘sustainable’ cities, climate is a central actor in Manchester’s history and will likely be so in the near future. We analyse the continuities and inflections of this history of climate science and urban planning in the metropolis by drawing on historical material and interviews with key local stakeholders, to understand the natural, social and political construction of this singular ‘industrial ecology’. Ultimately, we ask whether stakeholders in the Greater Manchester area can overcome existing challenges to go towards a greener, more resilient and sustainable city.

This paper traces the history, and current challenges, of climate science and urban design in Greater Manchester, UK. The Mancunian metropolis is a remarkable example of a ‘climatic city’, one that shapes its climate as much as it is shaped by it. From the efforts to control smoke and clear slums in the 19th century, to today’s race to be at the forefront of ‘green’ and ‘sustainable’ cities, climate, in relation to planning, is a central actor in Manchester’s history and will likely be so in the near future. We analyse the continuities and inflections of this history of climate science and urban planning in the metropolis by drawing on historical material and interviews with key local stakeholders. Ultimately, we ask whether stakeholders in the Greater Manchester area can overcome existing divisions regarding what actions to take. We are indebted to Williams’ city profile in Cities (Williams, 1996), and we aim to build and expand on this foundation, by looking at how Manchester, as a metropolitan area and not just as a city, is addressing the challenges of the 21st century. Williams’ paper described the city at the end of a phase of painful de-industrialisation, highlighting efforts to harness the service economy and reshape the image of Manchester as a dynamic, post-industrial city. We pick up from there and analyse how the city-region is moving ahead with this post-industrial agenda, and how strategies focusing on the climate-planning nexus are at the heart of visions of the future. We draw upon a combination of urban regime theory and ecological modernisation to frame our understanding, developed in four sections. Firstly, we situate Manchester’s approach to urban climate and design within its wider historical and contemporary socio-political and natural context. Secondly, we look at the production of climatic knowledge in the city by government and private sector actors. We then look at the outcomes of this research in a third part, before moving onto a conclusion in part four.

Today, a technocratic, pragmatic Labour party rules over the city of Manchester, to the extent that some call it a ‘one party city’ (Interview with an environmental activist). Since the ‘entrepreneurial turn’, the city has witnessed ‘a shift away from a concern with the political process in favour of an executive shift that emphasised top-down managerial prerogatives’ (Quilley, 1999, p. 203). The city of Manchester is often the driving force within AGMA on a number of issues, and remains the centre of the regional services and office bases. Initiatives such as MIDAS, City Pride, the airport expansion and the Commonwealth Games stemmed from Town Hall. In climate matters, Manchester has a desire to be, once again, a city of firsts. Manchester, as a municipality, and, through AGMA, as a metropolis, has taken to climatic urbanism, and especially the discourse of the ‘green city’, as a way of enticing footloose capital to lay anchor in the city. Far from conflicting with growth, environmentalism (whether the internalisation of negative externalities associated with urban growth or the promotion of positive urban environmental externalities) is a key component of the entrepreneurial city, which markets itself as clean and attractive: ‘ a place for business yet devoid of factories’. This is typical of the process of ecological modernisation, both in terms of its achievements and shortcomings. In this field, the Manchester elite is particularly adept at showcasing its actions. Just like the city’s ‘regeneration’ into a supposedly cosmopolitan, ‘premier league’ European city followed a certain script (Quilley, 1999, p. 190), ‘sustainable’ Manchester does too. Manchester’s elite may be relatively united, but it faces opposition, both for its interpretation of what it means to be ‘green’, and what some see as a lack of engagement with stakeholders in favour of a top-down approach to decision-making. This is not new in Manchester politics, as some observers have noted: As the growth machine began to cohere and gather momentum, there were signs that potential obstacles such as planning policy or community involvement became increasingly marginalized within the Town Hall’s neo-Gothic spiral staircases of power (While et al., 2004, p. 556). Manchester is by all accounts a boosterist urban regime focused on growth. This can in certain circumstances lead to a decision process whereby dissenting voices may be excluded. There is much research going on, but its degree of present and future application remains unclear. However, one has to keep in mind the constraints faced by the city and the region; that of fragmentation first, although this seems to be evolving with pressures towards better metropolitan government, but also of increasing budgetary strains in the current context of recession and centrally-imposed funding cuts. To put it in other terms, Manchester city council, and surrounding boroughs to some extent, are not anti-environment but they are, by necessity, pro-growth. Manchester can lay claim to being the first ‘climatic city’, where a combination of climatic givens and industrial emissions was historically identified and analysed through scientific research, and then actions were taken in order to mitigate its most negative effects on human and natural health and wellbeing. In this sense, the city offers an interesting and encouraging example of the contribution of urban climate science to urban planning. However, actions on this climate, from the point of view of emissions control and city planning, led to their own consequences and new problems, hence a turn, in the late 20th century/early 21st century to an elite-led discourse on manufacturing a ‘green city’. This appears as another way devised by an enterprising city regime to induce inward investment in a city hollowed out by the collapse of its industry and an over-reliance on the service sector. Despite a heavy academic involvement in producing knowledge and possible forms of intervention on the urban fabric, the city seems to have barely grappled with the issues at hand, and has also succeeded in alienating a segment of the population that feels left out of the debate. Interestingly, hope may come from private enterprise, with the proactive approach developed by Bruntwood and the EcoCities project for instance. This however will not address the problems faced by the city-region as a whole, and is resolutely business-oriented.