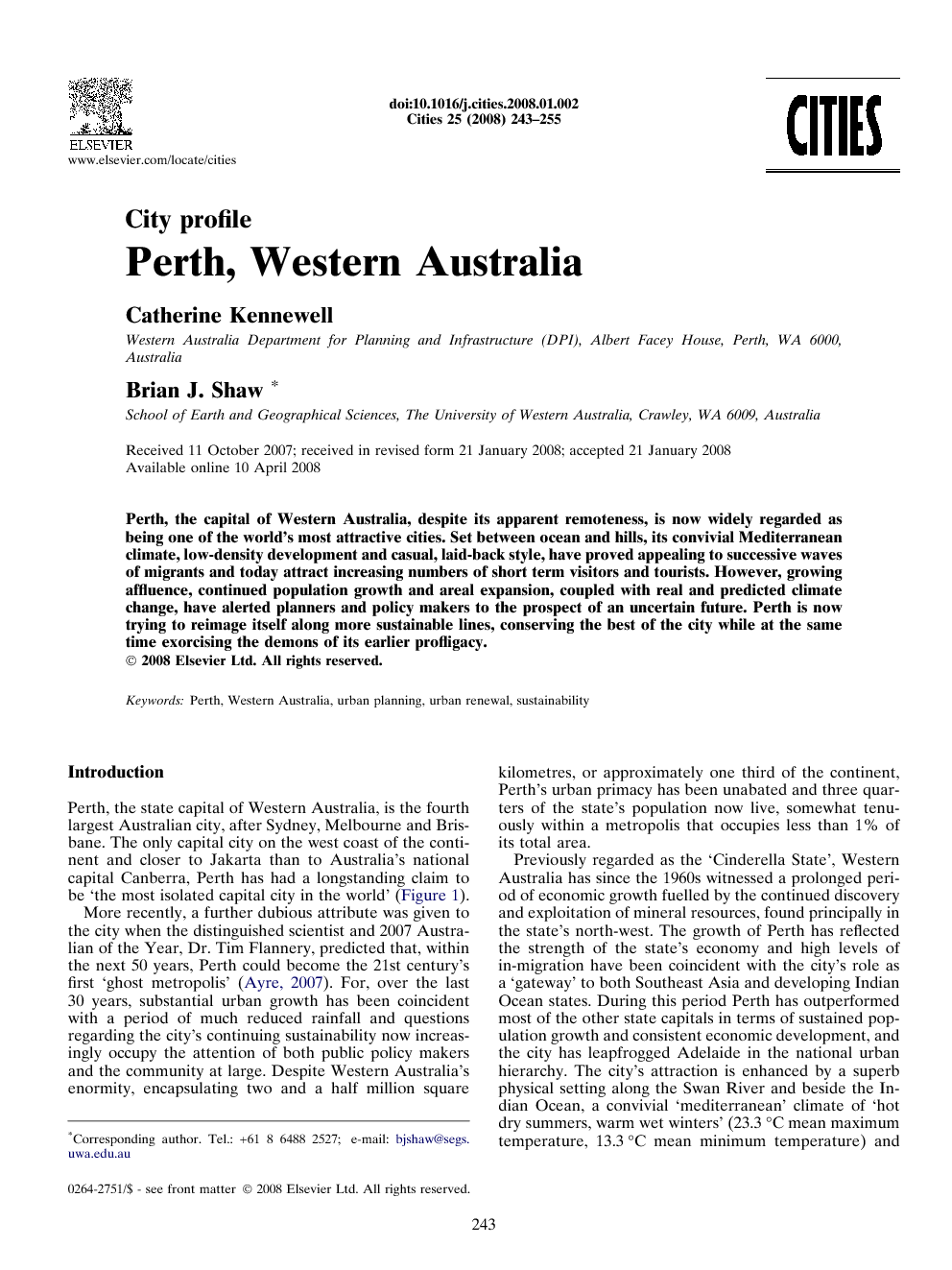 Perth, the capital of Western Australia, despite its apparent remoteness, is now widely regarded as being one of the world’s most attractive cities. Set between ocean and hills, its convivial Mediterranean climate, low-density development and casual, laid-back style, have proved appealing to successive waves of migrants and today attract increasing numbers of short term visitors and tourists. However, growing affluence, continued population growth and areal expansion, coupled with real and predicted climate change, have alerted planners and policy makers to the prospect of an uncertain future. Perth is now trying to reimage itself along more sustainable lines, conserving the best of the city while at the same time exorcising the demons of its earlier profligacy.

Perth, the state capital of Western Australia, is the fourth largest Australian city, after Sydney, Melbourne and Brisbane. The only capital city on the west coast of the continent and closer to Jakarta than to Australia’s national capital Canberra, Perth has had a longstanding claim to be ‘the most isolated capital city in the world’ (Figure 1). More recently, a further dubious attribute was given to the city when the distinguished scientist and 2007 Australian of the Year, Dr. Tim Flannery, predicted that, within the next 50 years, Perth could become the 21st century’s first ‘ghost metropolis’ (Ayre, 2007). For, over the last 30 years, substantial urban growth has been coincident with a period of much reduced rainfall and questions regarding the city’s continuing sustainability now increasingly occupy the attention of both public policy makers and the community at large. Despite Western Australia’s enormity, encapsulating two and a half million square kilometres, or approximately one third of the continent, Perth’s urban primacy has been unabated and three quarters of the state’s population now live, somewhat tenuously within a metropolis that occupies less than 1% of its total area. Previously regarded as the ‘Cinderella State’, Western Australia has since the 1960s witnessed a prolonged period of economic growth fuelled by the continued discovery and exploitation of mineral resources, found principally in the state’s north-west. The growth of Perth has reflected the strength of the state’s economy and high levels of in-migration have been coincident with the city’s role as a ‘gateway’ to both Southeast Asia and developing Indian Ocean states. During this period Perth has outperformed most of the other state capitals in terms of sustained population growth and consistent economic development, and the city has leapfrogged Adelaide in the national urban hierarchy. The city’s attraction is enhanced by a superb physical setting along the Swan River and beside the Indian Ocean, a convivial ‘mediterranean’ climate of ‘hot dry summers, warm wet winters’ (23.3 °C mean maximum temperature, 13.3 °C mean minimum temperature) and high levels of daily sunshine, both in summer and winter. The low altitude Darling Ranges offer lifestyle alternatives for those who wish to live in a bushland setting and there are ample facilities for outdoor recreational pursuits. The latest census figures, released in July 2007, recorded a population increase of 8.3% over the period 2001–2006, making Perth the second fastest growing capital behind Brisbane (see Table 1). At the same time, rapidly increasing real estate prices and an overheated rental market have reduced the relative cost-of-living advantage that Perth used to have over its eastern states rivals.

Nearly two decades have passed now since Metroplan ushered in a revised vision for a denser, less car dependent and less water profligate Perth. A number of innovative public and private initiatives have injected capital into the inner city, notably through the East Perth and Subi Centro projects which have transformed former industrial sites into higher density, mixed use developments at a premium price. The public railway system, once in decay, has been rejuvenated by the construction of northern and southern suburban lines. The latter, in operation from December 2007, has cost some AU$1.66 billion and will provide much needed city centre access for the residents of Perth’s southern corridors (Planning and Infrastructure Minister Alannah MacTiernan, 2007). The implementations of Network City initiatives, incorporating concepts such as Smart Growth, New Urbanism, Liveable Neighbourhoods and Transit Oriented Development that encompass a variety of sustainable approaches, are gradually transforming attitudes towards the Perth urban lifestyle. However, planning is still being driven by the notion of continued growth, despite concerns over water supply and general environmental degradation along the Swan coastal plain. The majority of projected population additions will still be found in seemingly ever-expanding suburbs, north and south of the city, and the Network City strategy projects a Perth and Peel population of 2.22 million by 2030. This represents a 52% increase on the 2001 figure. In terms of sustainable development a number of ongoing issues are of continued concern. Accelerating social polarisation associated with Perth’s growing economy needs to be addressed. Further uncertainty in regard to long term planning has been injected by a recent Federal Court decision which found that native title continues to exist within an area in and around Perth, part of a larger Noongar claim which is now pending appeal (Bennell v State of Western Australia, 2006). Indeed, the recent debate initiated by Charles Landry’s visit highlighted the need for a more substantial acknowledgement of the pre-urban indigenous occupants of the Perth area. He also highlighted Perth’s lack of social capital and suggested that it needed to stop being a city that says ‘no’. On a wider scale, if sustainable development is to be achieved, the current Perth ‘lifestyle’ needs substantial revision in terms of climate modification, transport and water use. The notion of Perth as a ‘solar city’, only the sixth such initiative in Australia and the first in the West, was actively promoted by the Federal Labor Party during the long election campaign of 2007 (Australian Labor Party Media Statement, 2007). Subsequently elected to power, in part on a platform of greater environmental accountability, the new Labor Government now has the opportunity to initiate a substantial change of mindset, backed by appropriate federal and state funding, in a concerted effort to belie Flannery’s dire prediction of Perth as a future ‘ghost metropolis’.