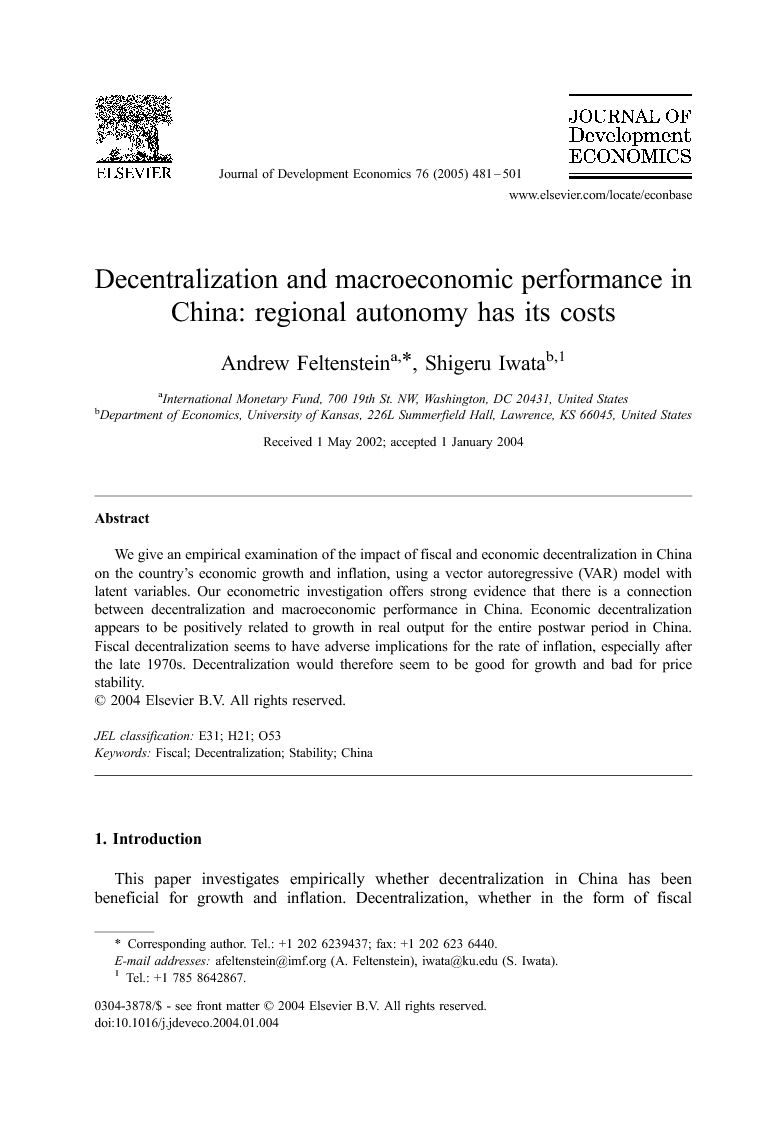 This paper investigates empirically whether decentralization in China has been beneficial for growth and inflation. Decentralization, whether in the form of fiscal federalism, or in the form of reduced government interference in the private sector, is generally thought to help an emerging economy. Although the devolution of economic power has been a central element in the reform process of many transition economies, there is relatively little empirical work examining the relationship between such decentralization and changes in the macroeconomy. Decentralization may improve allocative efficiency, but it may also make stabilization policies more difficult to carry out. See, e.g., Prudhomme (1994) and Tanzi (1995). China has instituted rapid economic decentralization, and has simultaneously experienced both growth and instability. There is a growing consensus in the academic literature about the mechanisms that create the links between decentralization and economic growth and inflation in post-reform China (Brandt and Zhu, 2000, Jin et al., 1999, Lardy, 1998, Naughton, 1995 and Yusuf, 1994). A simplified version of such a mechanism may be described as follows. Although the aggregate effective tax burden may not have changed, fiscal decentralization has caused tax revenues to shift from the central government to regional governments. The regional governments, infused with new revenue, begin to build local infrastructure. This infrastructure encourages investment, both of the non-state as well as the state-owned enterprises (SOEs). The non-state firms tend to respond to the increased local infrastructure with higher rates of investment than the SOEs, given their greater efficiency. As the SOEs attempt to keep up with the rates of investment of non-state firms, a further adjustment occurs. The SOEs, observing the increased rate of capital formation of the non-state sector, increase their own rate of investment beyond the rate that would be optimal. The SOEs are able to do so because they have access to local bank loans that are not justified on economic grounds. This access to the banking system thereby distinguishes them from the non-state firms.2 The banks that passively grant these loans are themselves financed by discount lending by the People's Bank. The resulting monetary expansion leads to increased inflation, while the higher output of both the SOEs and non-state enterprises cause an increase in aggregate real income.