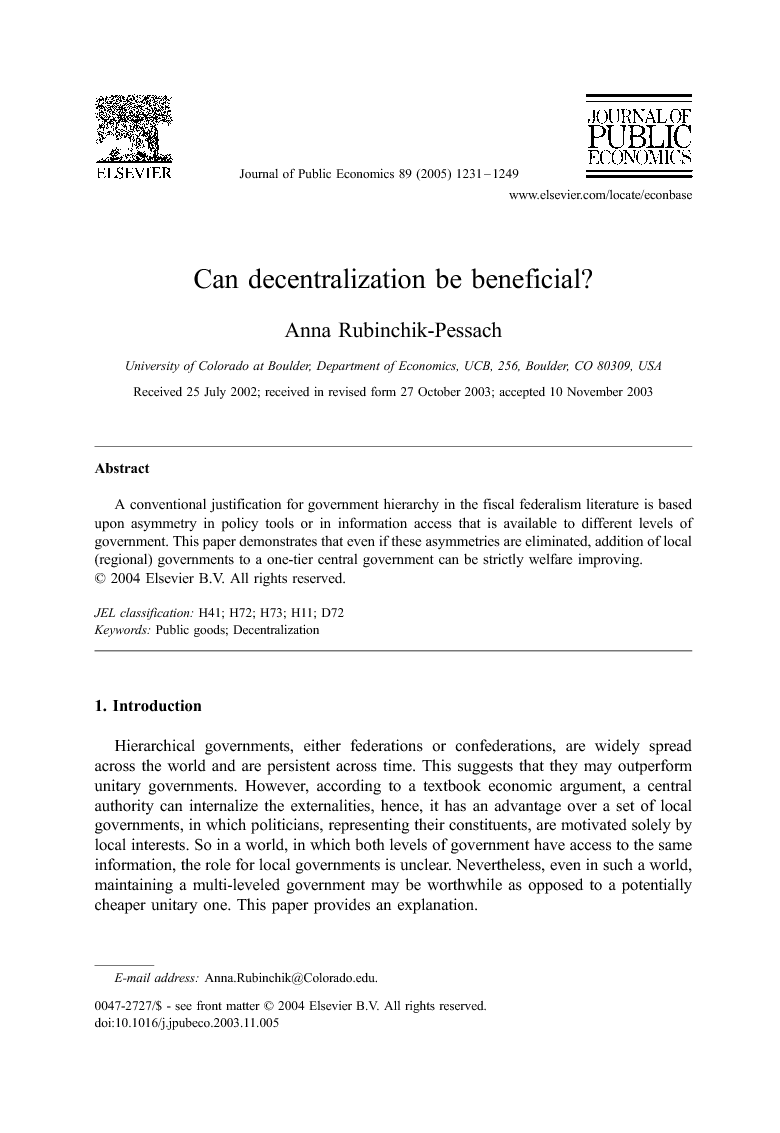 A conventional justification for government hierarchy in the fiscal federalism literature is based upon asymmetry in policy tools or in information access that is available to different levels of government. This paper demonstrates that even if these asymmetries are eliminated, addition of local (regional) governments to a one-tier central government can be strictly welfare improving.

Hierarchical governments, either federations or confederations, are widely spread across the world and are persistent across time. This suggests that they may outperform unitary governments. However, according to a textbook economic argument, a central authority can internalize the externalities, hence, it has an advantage over a set of local governments, in which politicians, representing their constituents, are motivated solely by local interests. So in a world, in which both levels of government have access to the same information, the role for local governments is unclear. Nevertheless, even in such a world, maintaining a multi-leveled government may be worthwhile as opposed to a potentially cheaper unitary one. This paper provides an explanation. Let me briefly describe the set up. Legislators at the “original position”1, have to write a constitution for their country. “Constitution” in this model is just a set of rules governing acceptance of public projects. As in Harsanyi (1992), the legislators are rational and it is common knowledge that each one of them may occupy any position (represent any locality with equal chance) after the “veil of ignorance” is lifted. Assume their beliefs are consistent, so that there is a common prior, F, with respect to the appearance of public projects, and this prior is shared behind the veil of ignorance. The benefits and costs of a project are expressed in the same (monetary) terms. Thus, by Harsanyi (1992), the social objective is to maximize the expected (net) value of a public project, or simply, the welfare. All the ex-ante identical individuals should agree on this objective, and so they can be thought of as a single (fictitious) individual, named ‘constitutional designer.’ The designer will decide to add local governments only if by doing so he can increase the expected welfare. The role of local governments here is reduced to accepting public projects that can be fully financed by one of the regions. In the absence of negative externalities, which is true in this model, an addition of local governments cannot decrease welfare. In these circumstances, the hierarchy is justified only if it generates a strictly positive social benefit that can cover the costs of running another tier of government (either explicit or implicit), these costs being omitted here for simplicity. That is why decentralization is called beneficial in this model only if it is strictly welfare improving. Clearly, the decision of whether or not to decentralize depends on the rules according to which the central legislature operates. If the designer is unconstrained, he can condition the constitution on the benefits and costs that become known to the legislators once a project appears on the agenda, and attain the ex-post optimum as in Laffont and Maskin (1982). Then there would be no need for local governments. This result, however, rests on the assumption that the realization of the payoffs is truly exogenous, in other words, it is not subject to strategic manipulations. Unfortunately, in many practical cases, the assumption is violated, as estimating benefits and costs of a public project requires specific knowledge, or expertise, that politicians often lack. For example, in the US, the evaluation of water projects is performed by the US Army Corps of Engineers. Clearly, once it is done, predicted benefits and costs become common knowledge among the legislators.2 In this case, conditioning the cost sharing arrangements on benefits would be equivalent to delegating the formulation of the rules to the “experts,” who conduct the evaluation study. As their objectives may not coincide with those of the elected representatives, and, especially, those of the general electorate,3 this can result in additional informational rents extracted by the experts, which, clearly down-plays the attractiveness of such a constitution. A way to avoid the “garbling of the information structure” (as in Tirole, 1999), resulting from formulating the constitution solely in terms of benefits and costs, is to write it as a “complete contract,” fully specifying future contingencies and the corresponding rules of acceptance of public projects. It is commonly known, however, that actual higher order laws are far from being that detailed. Reasons for that are abundant. Apart from computational complexity associated with writing and implementation (see Anderlini and Felli, 1999) or even examining contractual completeness (see Gilboa et al., 2002), the enforcement of such a constitution can be problematic, both because some contingencies are impossible to verify and also due to the intricacies of creating a proper motivation for the judges (see Tirole, 1999 for the overview). Abstracting from the problem of formulating an “optimally incomplete” contract, which takes into account all the above mentioned considerations, I will follow Aghion and Bolton (2003) in assuming a particular form of incompleteness, so prevalent in practice. A public good has to be provided if at least m out of R legislators vote in its favor. In contrast to Aghion and Bolton (2003), taxes in this model can be specified ex-ante and can be conditioned on the voting behavior.

This model provides an economic rationale for the existence of a hierarchical government, which may outperform the unitary one, even in the absence of the vertical asymmetric information within the hierarchy and even though the absolute advantage of the (upper) central government in making decisions with respect to public goods is evident. Somewhat contrary to the accepted view, if the issues to be tackled by the government are predominantly of local importance, albeit generating some spillovers, central government alone is sufficient, i.e., there is no need to decentralize. On the other hand, it is the prevalence of valuable global issues along with the projects of local importance that generates the need for local governments. The hierarchy induces specialization of each tier on the corresponding issues, thus, enhancing the overall welfare, which can justify possible costs associated with the additional level of government. Thus, the main argument does not stem from an assumed deficiency of a central government, but rather, rests on the idea of specialization.