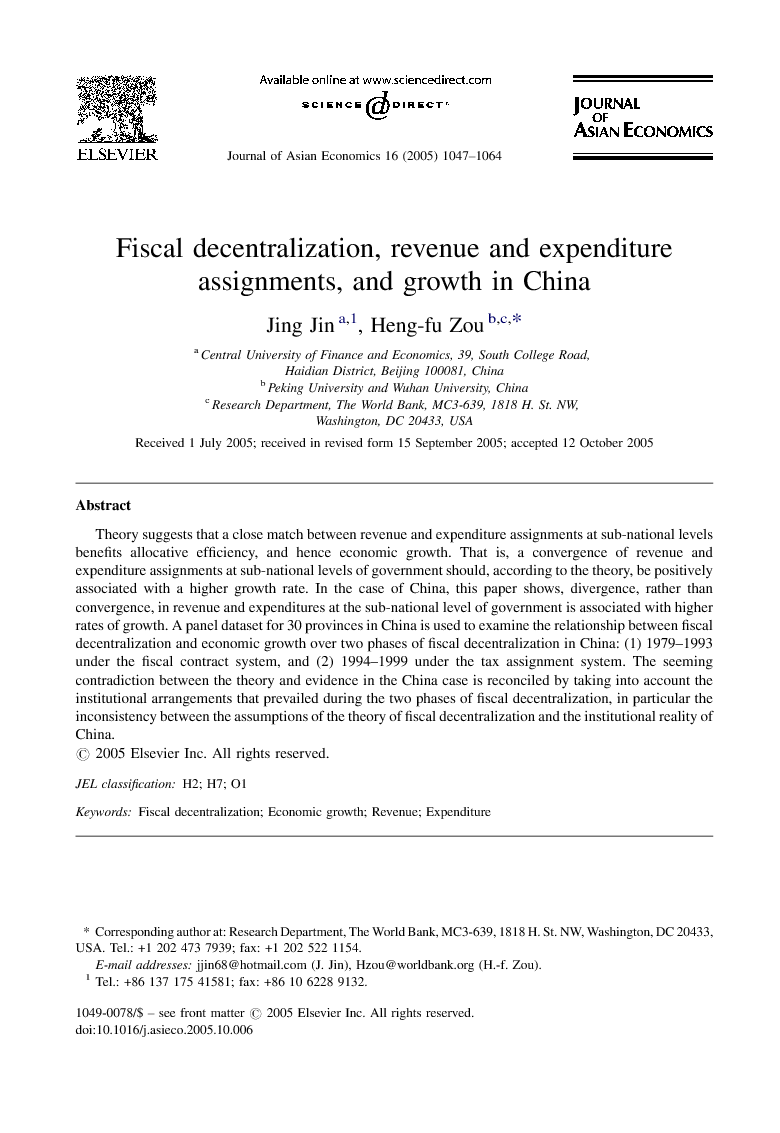 Theory suggests that a close match between revenue and expenditure assignments at sub-national levels benefits allocative efficiency, and hence economic growth. That is, a convergence of revenue and expenditure assignments at sub-national levels of government should, according to the theory, be positively associated with a higher growth rate. In the case of China, this paper shows, divergence, rather than convergence, in revenue and expenditures at the sub-national level of government is associated with higher rates of growth. A panel dataset for 30 provinces in China is used to examine the relationship between fiscal decentralization and economic growth over two phases of fiscal decentralization in China: (1) 1979–1993 under the fiscal contract system, and (2) 1994–1999 under the tax assignment system. The seeming contradiction between the theory and evidence in the China case is reconciled by taking into account the institutional arrangements that prevailed during the two phases of fiscal decentralization, in particular the inconsistency between the assumptions of the theory of fiscal decentralization and the institutional reality of China.

Since initiating economic reforms in 1978, fiscal decentralization has been a central component of China's economic policy at a time when China has experienced unprecedented economic growth. Although China remains a unitary political system, where sub-national government elections are virtually not exist, its fiscal system is nevertheless a decentralized one featured by a fiscal contract system (1980–1993)1 and revenue assignment system (1994–present). Regardless of China's non-democratic institutions, the benefits of fiscal decentralization seem still applicable, according to Oates (1972, p. xvi), because “for an economist, however, constitutional and political structures are of less importance: What is crucial for him is simply that different levels of decision-making do exist, each of which determines levels of provision of particular public services in response largely to the interests of its geographical constituency. By this definition, practically any fiscal system is federal or at least possesses federal elements”. The question of whether fiscal decentralization has contributed to China's economic success over the past 20 years is, however, open to debate. Some argue that fiscal decentralization has been fundamental to China's economic success (Oi, 1992; Qian, 1999; Qian & Weingast, 1997). It has been asserted that the fiscal contract system (1980–1993) provided material incentives that encouraged and rewarded sub-national governments to promote local economies (Oi, 1992 and Qian, 1999). Secondly, Qian (1999) assumes that sub-national governments had less control over banks and therefore could not bail out their state-owned enterprises (SOEs) by extending credit to them as the central government did. Fiscal decentralization, they argue, hardened the budget constraints of sub-national governments’ SOEs, and thus made these SOEs more efficient (Qian, 1999). The fiscal contract system, it is also asserted, allowed sub-national governments to conceal information about their financial position and enabled them to avoid revenue predation from the Center (Qian & Weingast, 1997), thus allowing them to retain the financial resources they needed for investments that promoted economic development.

This study attempts to examine how fiscal decentralization affected provincial economic growth in China. In addition, it investigates how the relationship between fiscal decentralization and provincial growth differed under the two different fiscal regimes that were adopted in China since 1980. The conventional wisdom that fiscal decentralization – revenue means should match expenditure needs as close as possible at sub-national level – to improves allocative efficiency and promote economic growth does not apply in the case of China. Using a panel data set for China's 30 provinces for the time period from 1979 to 1993 and 1994 to 1999 separately, the results of this study suggest that in both time periods, expenditure and revenue decentralization levels should further diverge to benefit provincial growth. For the revenue contract system (1979–1993), for example, tax collection was localized and the provinces collected taxes on the Center's behalf as its agents. Revenue decentralization, as measured by tax collection at each province as a percentage in total revenue, was therefore much more decentralized than expenditure because the provinces remitted a proportion (or a fixed amount plus a pre-determined growth rate) of the collected tax revenue to the Center and kept the rest (for detail, see Ahmad et al., 1995; Bahl & Wallich, 1992; World Bank, 1993). As such, the marginal budgetary revenue collection and marginal budgetary expenditure was highly correlated, and therefore suggests that more revenue decentralization spurs tax collection and allows for more spending (possibly by both central and provincial government) on investment (Jin, Qian, & Weingast, 1999). While this explanation supports the notion that revenue decentralization stimulates revenue mobilization from local sources (Shah, 1994), it also suggests that expenditure centralization promotes growth because the central government spends more efficiently than the provinces (Zhang & Zou, 1998).