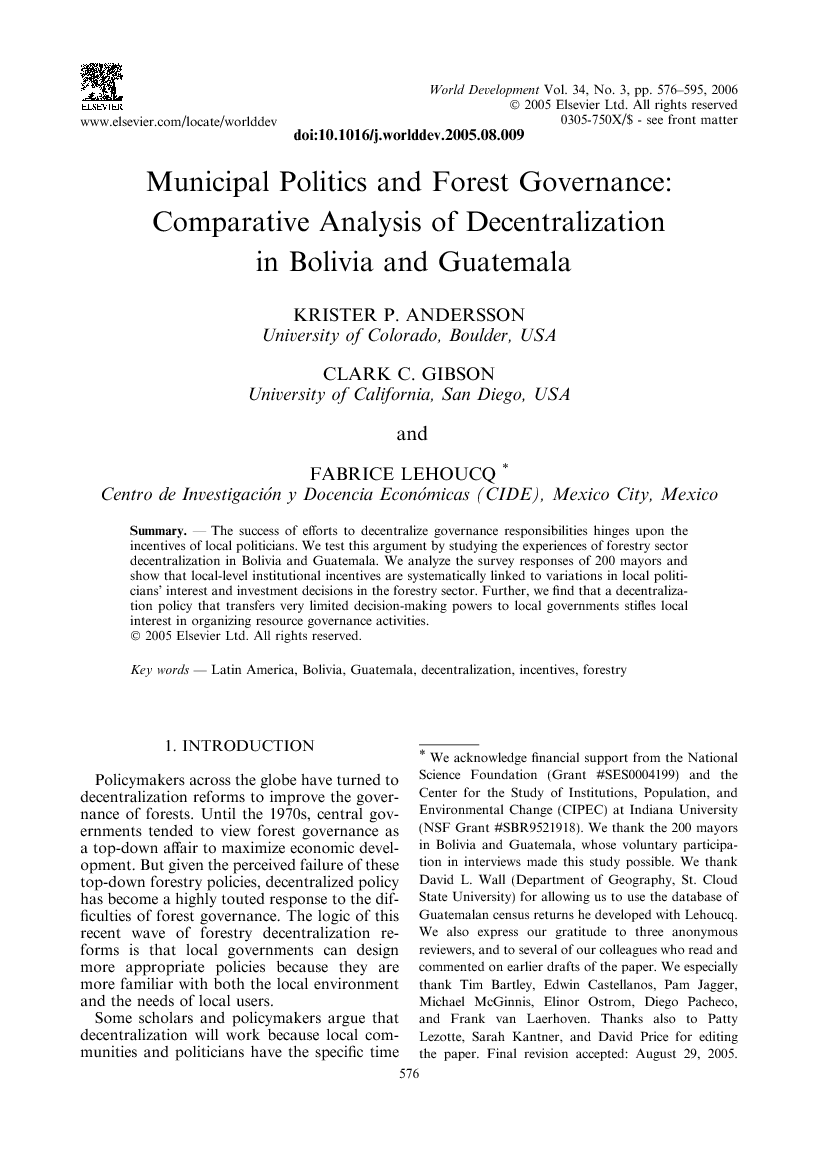 The success of efforts to decentralize governance responsibilities hinges upon the incentives of local politicians. We test this argument by studying the experiences of forestry sector decentralization in Bolivia and Guatemala. We analyze the survey responses of 200 mayors and show that local-level institutional incentives are systematically linked to variations in local politicians’ interest and investment decisions in the forestry sector. Further, we find that a decentralization policy that transfers very limited decision-making powers to local governments stifles local interest in organizing resource governance activities.

Policymakers across the globe have turned to decentralization reforms to improve the governance of forests. Until the 1970s, central governments tended to view forest governance as a top-down affair to maximize economic development. But given the perceived failure of these top-down forestry policies, decentralized policy has become a highly touted response to the difficulties of forest governance. The logic of this recent wave of forestry decentralization reforms is that local governments can design more appropriate policies because they are more familiar with both the local environment and the needs of local users. Some scholars and policymakers argue that decentralization will work because local communities and politicians have the specific time and place information needed to construct better policies than central governments (i.e., Hayek, 1948, Oates, 1999 and World Bank, 1988). Others indicate that decentralization operates differently depending on precisely what powers are decentralized (i.e., Cohen and Peterson, 1999, Litvack et al., 1998, Ribot, 2002 and Rondinelli et al., 1989). Still others argue that decentralization may work, but only in the context of specific institutions that include mechanisms of accountability, oversight, and resource transfers (i.e., Agrawal and Ribot, 1999, Andersson, 2003, Blair, 2000, Fiszbein, 1997, Gibson and Lehoucq, 2003 and Larson, 2002). Studies using relatively large samples of municipalities to test these hypotheses are uncommon for single-country studies and non-existent for multi-country studies. Consequently, we do not possess very much systematic evidence about one of the most significant policy innovations in the environmental arena in the past 50 years.

Decentralization has been a significant tool of political reform over the last quarter century. Governments worldwide have devolved authority to various subunits over an extensive range of policies. Multilateral agencies and donors have also encouraged central governments to empower subnational jurisdictions, such as regions and municipalities. Environmentalists and policymakers have echoed the call to let democratically elected local politicians take more responsibility over many natural resources, including forests, one of the most important and difficult natural resources to govern. Local politicians play an increasingly critical role in environmental governance because they may conform to, filter, or completely ignore their new decentralized mandate. They decide to what extent environmental regulations are enforced, vulnerable ecosystems protected, and local users are offered assistance to manage their resources. This new political reality underscores the need to understand under which conditions local politicians are more likely to invest in environmental governance. Previous accounts point to the influence of the local politicians’ personal characteristics, their political orientation, and their constituents’ general level of economic affluence. We show that decentralization outcomes are better understood if we, in addition, pay attention to the institutional incentives perceived by local politicians. If local politicians perceive potential financial or political benefits associated with environmental governance, they are more likely to take an active interest in such activities. We test this argument empirically in the forestry sectors of 200 municipal governments in Bolivia and Guatemala and find that local incentive structures are strong predictors of municipal government interest and investments in forestry activities.