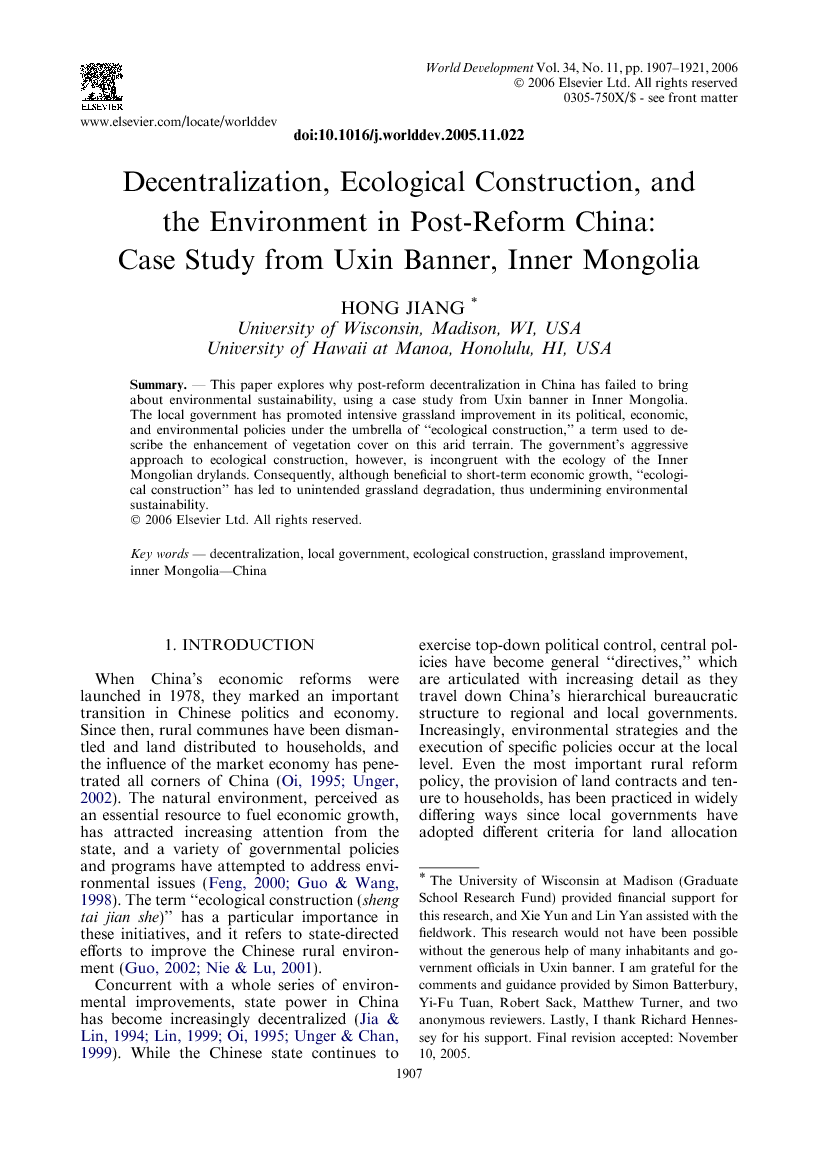 This paper explores why post-reform decentralization in China has failed to bring about environmental sustainability, using a case study from Uxin banner in Inner Mongolia. The local government has promoted intensive grassland improvement in its political, economic, and environmental policies under the umbrella of “ecological construction,” a term used to describe the enhancement of vegetation cover on this arid terrain. The government’s aggressive approach to ecological construction, however, is incongruent with the ecology of the Inner Mongolian drylands. Consequently, although beneficial to short-term economic growth, “ecological construction” has led to unintended grassland degradation, thus undermining environmental sustainability.

When China’s economic reforms were launched in 1978, they marked an important transition in Chinese politics and economy. Since then, rural communes have been dismantled and land distributed to households, and the influence of the market economy has penetrated all corners of China (Oi, 1995 and Unger, 2002). The natural environment, perceived as an essential resource to fuel economic growth, has attracted increasing attention from the state, and a variety of governmental policies and programs have attempted to address environmental issues (Feng, 2000 and Guo and Wang, 1998). The term “ecological construction (sheng tai jian she)” has a particular importance in these initiatives, and it refers to state-directed efforts to improve the Chinese rural environment ( Guo, 2002 and Nie and Lu, 2001). Concurrent with a whole series of environmental improvements, state power in China has become increasingly decentralized (Jia and Lin, 1994, Lin, 1999, Oi, 1995 and Unger and Chan, 1999). While the Chinese state continues to exercise top-down political control, central policies have become general “directives,” which are articulated with increasing detail as they travel down China’s hierarchical bureaucratic structure to regional and local governments. Increasingly, environmental strategies and the execution of specific policies occur at the local level. Even the most important rural reform policy, the provision of land contracts and tenure to households, has been practiced in widely differing ways since local governments have adopted different criteria for land allocation and different contract lengths (see Banks, 2001, Ho, 2000 and Kung and Liu, 1997). As a result, Benewick (1998, p. 459) observes a political “power drift” occurring “from the party to state institutions and from the center to the regions and localities,” and in considering the economic impacts, Oi (1995) argues that local governments have become important market players and have therefore played a more significant role in fostering economic development.