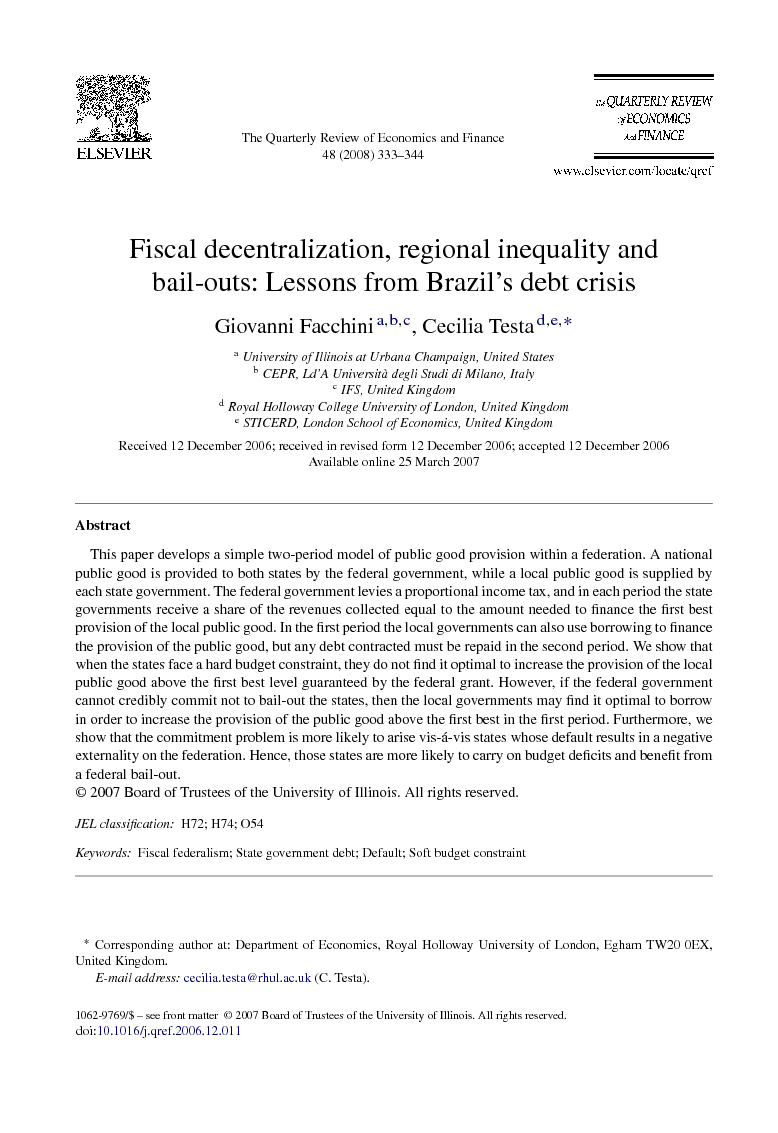 Brazil is a federal country characterized by highly decentralized spending and taxation decisions. The authority of the federal government, states and municipalities on budgetary matters is strictly regulated by the constitution. States enjoy a substantial autonomy, but in an attempt to control sub-national budget deficit, the 1988 constitution restricts their borrowing ability which is scrutinized by the Senate. Despite these provisions, state deficits have been a persistent concern throughout the post 1988 period. The last state debt crisis of the mid 1990s, triggered by the soaring interest rates following the implementation of the “Plano Real” in 1994, exposed the serious macroeconomic threat posed by the risk of default of the four major debtor states of Sao Paulo, Rio de Janeiro, Minas Gerais and Rio Grande do Sul, and ended up requiring a bail-out by the central government. With the so called “troca” agreement, the federal government authorized in fact the exchange of state bonds for federal and central bank bonds and thus relieved the states from the burden of servicing their debt. While forcing the major debtor states into default might have damaged the macroeconomic stability of the entire country, the softening of their budget constraint has undesirable implications both in terms of future incentives to borrow and of regional inequality. First, as the cost of borrowing by a state can be shared with the other members via the mechanism of federal bail-out, a so called “common pool” problem can arise, whereby states that are not liable for the entire repayment of their debt tend to borrow in excess of what would be optimal. Second, by threatening the economic stability of the entire country, the biggest and richest states acquire a bargaining power that limits the ability of the federal government to redistribute income towards the poorer states. This aspect of the federal budget is particularly problematic in a country like Brazil, where regional inequality is a severe problem (Azzoni, 2001 and Milanovic, 2005). As documented by Rodden (2003), the average per capita GDP of the wealthiest states during the 1990–2000 period is five times bigger than that of the poorest states. At the same time, the dependence of Brazilian states on intergovernmental transfers varies enormously, with Sao Paulo receiving only 7% of its revenue from the federal government while Acre and Amazonas depend for more than 70% of their revenue from intergovernmental transfers. The 1988 constitution prescribes a very detailed system of intergovernmental transfers that should have addressed the issue of regional disparities, but according to Shankar and Shah (2000), revenue sharing agreements mandated by the constitution had no effect on regional income inequality in Brazil. This is perhaps not surprising if one considers that the wealthiest and most fiscally independent states, holding the majority of the total sub-national debt,1 were the main beneficiaries of a large federal bail-out. In this paper we propose a theoretical framework where the incentives to borrow within a federation of heterogenous states are explicitly modeled. In a two-period setting, a large and a small state, belonging to the federation, are the recipients of federal funds used to finance the provision of a general and local public good. Federal funds are raised through a proportional income tax that is in part directly spent by the federal government to provide the general public good, and in part allocated to the state government in the form of a grant that must be spent to supply a local public good. The first period provision of the local public good can also be financed by borrowing at the current interest rate, however in the second period the entire debt must be repaid. The amount of the national public good and the federal transfer are set in each period as to maximize the total welfare of the federation (first best provision). Furthermore, the transfer received by each state can only be spent for the provision of the local public good. Hence, if a state borrowed in first period, it will need to reduce its citizens private consumption in order to repay the debt. If the state is not able to repay the outstanding debt, it will default unless the federal government decides to bail it out. The default has a negative impact on the income of the insolvent state, and in the case of the large state also on that of the entire federation (negative externality). We show that if the federal government can credibly commit not to bail-out the states (hard budget constraint), then the sub-national entities will not find it optimal to increase the provision of the local public good above the first best level guaranteed by the federal grant. However, when there is a prospect of bail-out, state governments might borrow to increase the provision of the public good above the first best. Furthermore, the commitment problem is more likely to arise when the default of a state may have a negative externality on the federation. As a consequence, big states, by threatening the stability of the federation, are more likely to face a soft budget constraint and run a budget deficit at the expense of smaller states. These results are consistent with the Brazilian experience, where the four major debtor states (that are also among the biggest in the federation), unable to service their debt in the budget crises following the implementation of the plano real, were the first to sign bail-out agreements with the federal government. Because they were “too big to fail”, not only the most fiscally independent states were paradoxically less prone to fiscal discipline, but their overspending clearly worked against the principle of federal redistribution that had been designed to reduce the gap between poorer and richer areas of the country. Not surprisingly, with a massive federal bail-out in favor of the most indebted wealthy states, Brazil's regional imbalances have not shown any declining tendency during the last decade.

Brazil has been characterized by a long history of sub-national debt crisis.6 The most recent one has unveiled the danger posed by the excessive borrowing of federal states. In particular, the size of debt accumulated by the states of Sao Paulo, Rio de Janeiro, Minas Gerais and Rio Grande do Sul was such that if those states were to default, the macroeconomic stability of the country would have been under serious threat. As a consequence, those states called for, and obtained federal bail-out of their debt. While the federal government had not much leeway to safeguard the macro-economic stability of the country, in the aftermath of the crisis is was clear that the existing constitutional budgetary provision had failed to prevent excess state borrowing. More importantly, the states that were more heavily indebted were not the most fiscally dependent poor regions, but the rich and fiscally independent ones. The reckless fiscal behavior of the four big debtors is a source of major concern because, beside threatening the economy of the federation, it endangers the redistribution from richer to poorer states, thereby preventing the reduction of the severe regional imbalances that characterize Brazil. To address the failures of the previous constitutional framework, in may 2000 a new fiscal responsibility law was approved with the objective to provide the central government with a credible commitment device to impose a hard budget constraints on federal states. In particular, article 35 of the fiscal responsibility law explicitly forbids bail-out from the federal government of any member of the federation. Furthermore, the law prohibits the exchange of states’ debt securities for federal public debt, which was one of the main instrument in past bail-outs episodes. Whether the new provisions will have a positive impact on the fiscal behavior of federal states and on Brazil's inter-states inequalities is an interesting question that only time will answer.