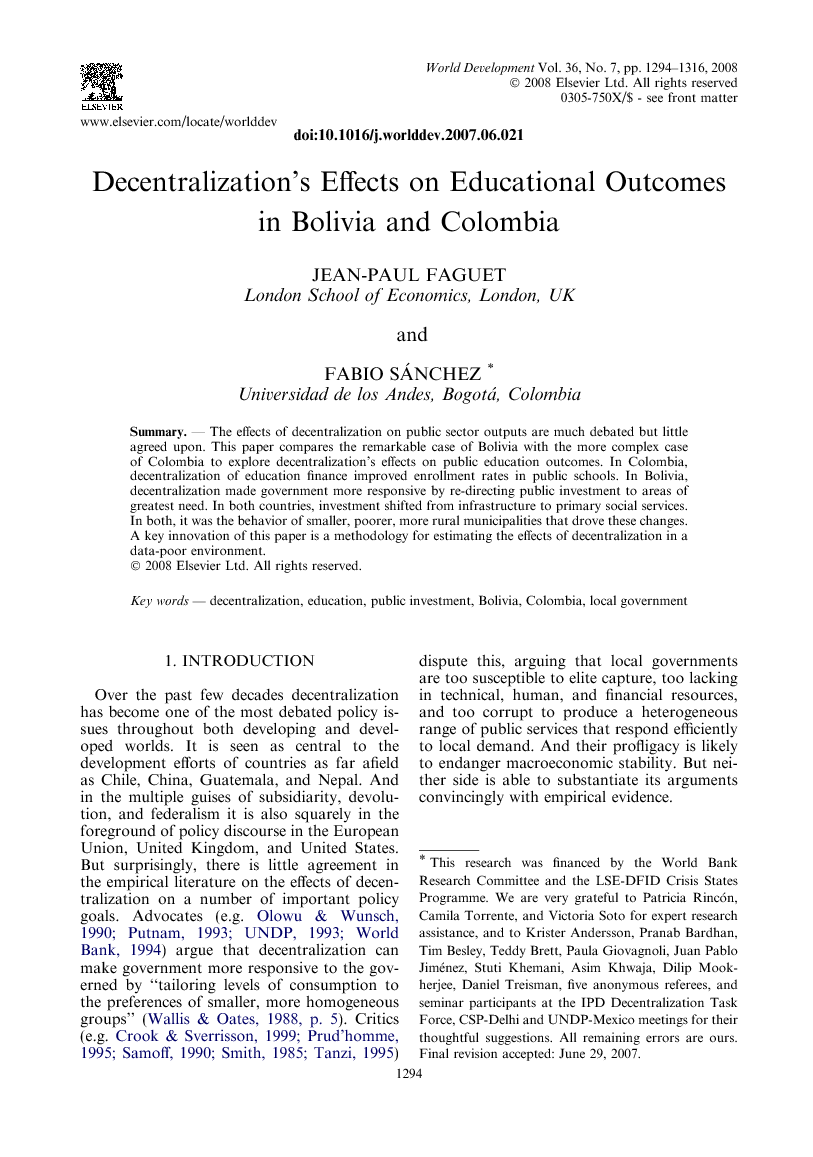 Over the past few decades decentralization has become one of the most debated policy issues throughout both developing and developed worlds. It is seen as central to the development efforts of countries as far afield as Chile, China, Guatemala, and Nepal. And in the multiple guises of subsidiarity, devolution, and federalism it is also squarely in the foreground of policy discourse in the European Union, United Kingdom, and United States. But surprisingly, there is little agreement in the empirical literature on the effects of decentralization on a number of important policy goals. Advocates (e.g. Olowu and Wunsch, 1990, Putnam, 1993, UNDP, 1993 and World Bank, 1994) argue that decentralization can make government more responsive to the governed by “tailoring levels of consumption to the preferences of smaller, more homogeneous groups” (Wallis & Oates, 1988, p. 5). Critics (e.g. Crook and Sverrisson, 1999, Prud’homme, 1995, Samoff, 1990, Smith, 1985 and Tanzi, 1995) dispute this, arguing that local governments are too susceptible to elite capture, too lacking in technical, human, and financial resources, and too corrupt to produce a heterogeneous range of public services that respond efficiently to local demand. And their profligacy is likely to endanger macroeconomic stability. But neither side is able to substantiate its arguments convincingly with empirical evidence.

The evidence from Bolivia and Colombia is consistent with some of the central claims in favor of decentralization. In both countries decentralization appears to have shifted public investment patterns in important ways, switching resources out of infrastructure and industry, and into primary social services such as education and water and sanitation. The evidence for Bolivia suggests that public investment in education became more responsive to real local needs, rising disproportionately in areas with the worst education indicators. As an implicit targeting strategy this is efficient, and probably served to improve educational outcomes, especially in rural areas. Unfortunately, data constraints do not allow us to test that theory. But we can for the case of Colombia, and the results are strong: decentralization improved enrollment rates in public schools. In districts where educational finance and policy making were under greater local control, enrollment increased. In districts where educational finance was still based on centrally controlled criteria, enrollment fell. Further evidence suggests that this was not the simple result of increasing financing levels, but due instead to the quality of investment that municipalities achieved—to how and where funds were spent. Of course, enrollment is only a proximate educational outcome; deeper outcomes of interest include literacy, numeracy, and standardized test results. Current data limitations prevent us from using such variables here. Based on the results above, however, we would expect to see improving literacy rates as a result of decentralizing education in the medium to long term.