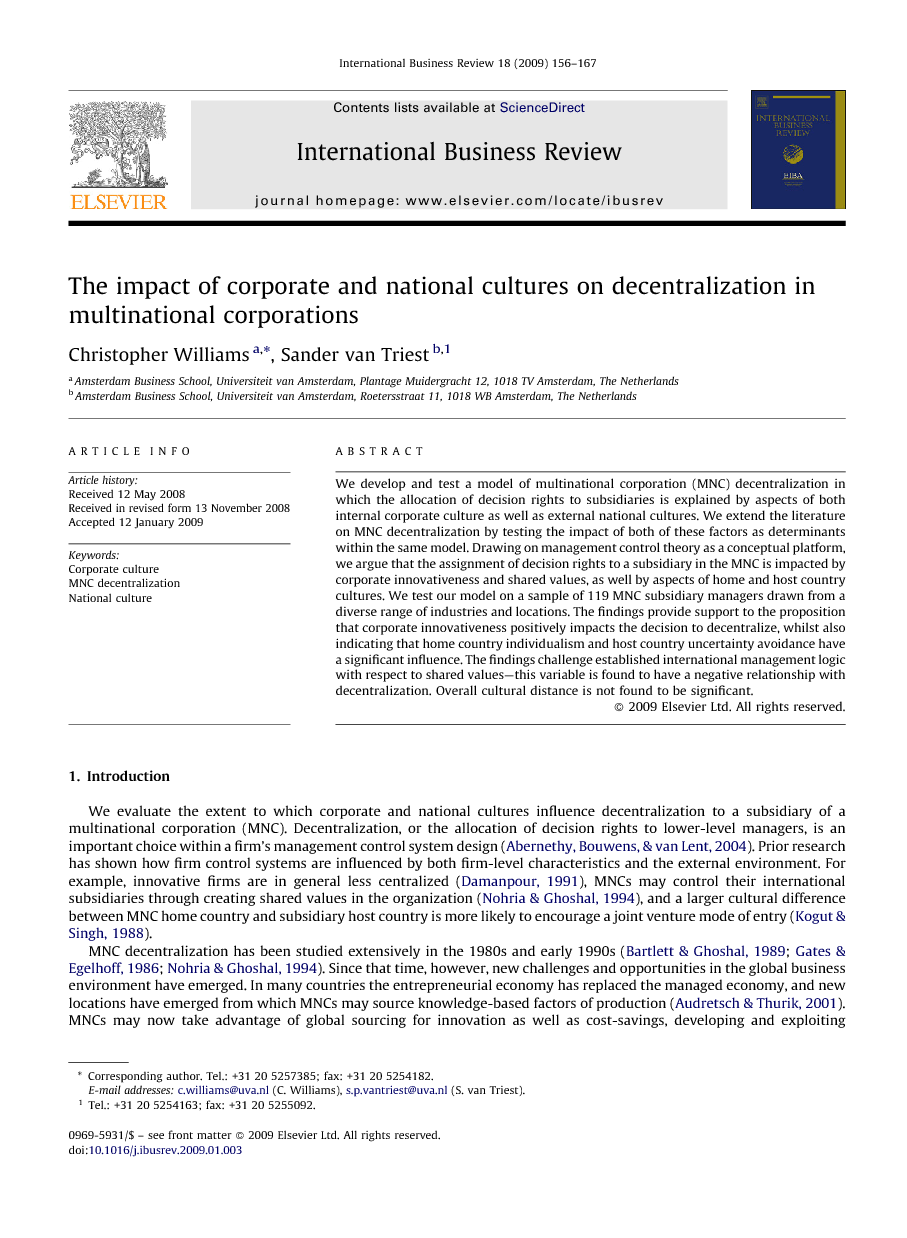 We develop and test a model of multinational corporation (MNC) decentralization in which the allocation of decision rights to subsidiaries is explained by aspects of both internal corporate culture as well as external national cultures. We extend the literature on MNC decentralization by testing the impact of both of these factors as determinants within the same model. Drawing on management control theory as a conceptual platform, we argue that the assignment of decision rights to a subsidiary in the MNC is impacted by corporate innovativeness and shared values, as well by aspects of home and host country cultures. We test our model on a sample of 119 MNC subsidiary managers drawn from a diverse range of industries and locations. The findings provide support to the proposition that corporate innovativeness positively impacts the decision to decentralize, whilst also indicating that home country individualism and host country uncertainty avoidance have a significant influence. The findings challenge established international management logic with respect to shared values—this variable is found to have a negative relationship with decentralization. Overall cultural distance is not found to be significant.

We evaluate the extent to which corporate and national cultures influence decentralization to a subsidiary of a multinational corporation (MNC). Decentralization, or the allocation of decision rights to lower-level managers, is an important choice within a firm's management control system design (Abernethy, Bouwens, & van Lent, 2004). Prior research has shown how firm control systems are influenced by both firm-level characteristics and the external environment. For example, innovative firms are in general less centralized (Damanpour, 1991), MNCs may control their international subsidiaries through creating shared values in the organization (Nohria & Ghoshal, 1994), and a larger cultural difference between MNC home country and subsidiary host country is more likely to encourage a joint venture mode of entry (Kogut & Singh, 1988). MNC decentralization has been studied extensively in the 1980s and early 1990s (Bartlett & Ghoshal, 1989; Gates & Egelhoff, 1986; Nohria & Ghoshal, 1994). Since that time, however, new challenges and opportunities in the global business environment have emerged. In many countries the entrepreneurial economy has replaced the managed economy, and new locations have emerged from which MNCs may source knowledge-based factors of production (Audretsch & Thurik, 2001). MNCs may now take advantage of global sourcing for innovation as well as cost-savings, developing and exploiting knowledge in countries such as India and China (Farrell, 2005 and Levy, 2005). Changes in political regimes, regional integration, the forces of globalization and powerful developments in information and communication technologies (Archibugi & Iammarino, 2002) have also contributed to a need to reassess how MNCs organize and control themselves. Recent scholars have therefore, quite rightly, brought attention to decentralization and autonomy within MNCs as an important avenue of ongoing academic research (Paterson & Brock, 2002; Young & Tavares, 2004).

For the control variables, the result is somewhat expected. US MNCs tend to be more centralized in our sample, supporting previous scholars’ claims that home country influences choice of control mechanism (Egelhoff, 1984 and Erramilli, 1996; Gates & Egelhoff, 1986). Being in a services industry is likely to produce more decentralization, supporting the arguments that discretion and empowerment must be given to front-line staff in service industries in order to enhance the service encounter for customers (e.g., De Chernatony & Segal-Horn, 2003). Similarly, P1 is supported: the decision to decentralize into a subsidiary is made in order to reinforce an innovative corporate culture and gain competitive advantage through responsiveness. No support is found for P2, however, and indeed, the results suggest that shared values are related with less, as opposed to more, decentralization. Within the host country, uncertainty avoidance is seen to play an important role (negative influence), as does individualism in the home country (positive influence).