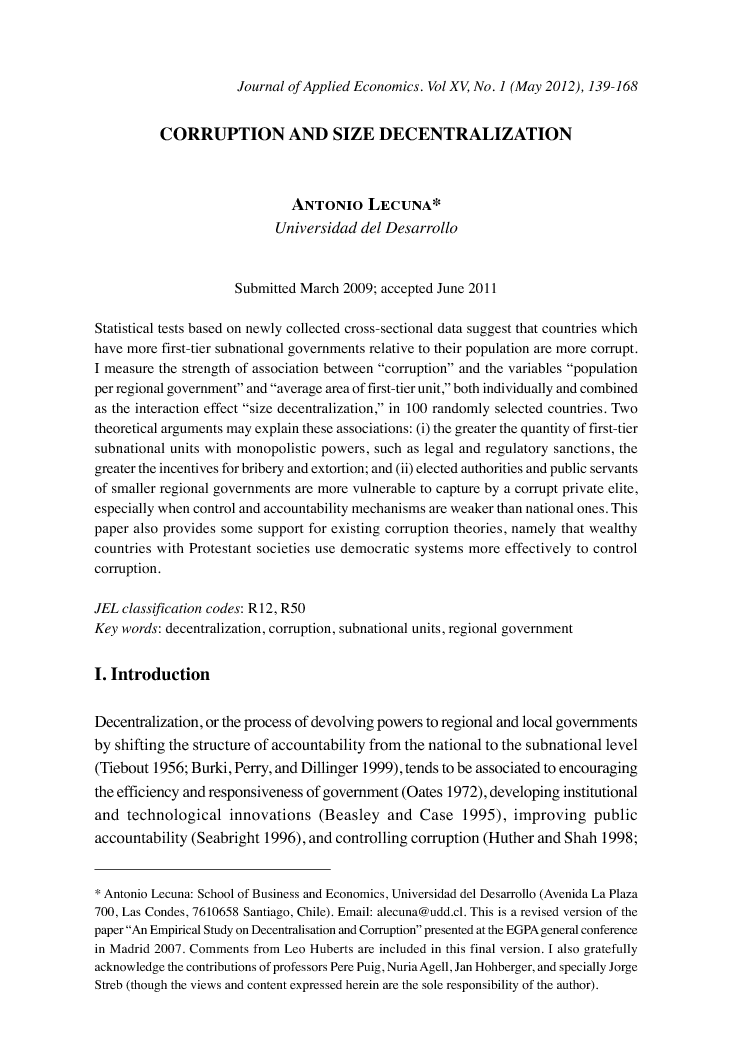 Statistical tests based on newly collected cross-sectional data suggest that countries which have more first-tier subnational governments relative to their population are more corrupt. I measure the strength of association between “corruption” and the variables “population per regional government” and “average area of first-tier unit,” both individually and combined as the interaction effect “size decentralization,” in 100 randomly selected countries. Two theoretical arguments may explain these associations: (i) the greater the quantity of first-tier subnational units with monopolistic powers, such as legal and regulatory sanctions, the greater the incentives for bribery and extortion; and (ii) elected authorities and public servants of smaller regional governments are more vulnerable to capture by a corrupt private elite, especially when control and accountability mechanisms are weaker than national ones. This paper also provides some support for existing corruption theories, namely that wealthy countries with Protestant societies use democratic systems more effectively to control corruption.

Decentralization, or the process of devolving powers to regional and local governments by shifting the structure of accountability from the national to the subnational level (Tiebout 1956; Burki, Perry, and Dillinger 1999), tends to be associated to encouraging the efficiency and responsiveness of government (Oates 1972), developing institutional and technological innovations (Beasley and Case 1995), improving public accountability (Seabright 1996), and controlling corruption (Huther and Shah 1998;de Mello and Barenstein 2001). However, recent evidence also suggests that certain measures of decentralization such as increasing the quantity and variety of firsttier subnational governments may increase the incentives that drive corruption (Shleifer and Vishny 1993; Bardhan 2002). The plausible link between decentralization and corruption (defined as “the abuse of entrusted power for private gain” by Transparency International) is a relevant issue that requires further exploration and questioning. Prud’homme (1995) makes an interesting comparison between Western medicine and decentralization. He argues that Western medicine is highly effective, but only when it is correctly applied to the appropriate illness, at the right time, and in the proper dosage. If these conditions are not met, then secondary harmful effects will probably be worse than the disease itself. Unfortunately, in the majority of cases, decentralization is prescribed in excess, with the presence of abusive regulations, without the financial or administrative capabilities needed, under inadequate institutional and democratic controls, and with inefficient public servants and bribe-thirsty elected authorities. Defining decentralization is a difficult task. This is due mainly because the definition of decentralization must first discuss the deep relationship between decentralized and federal states. According to Riker (1964), a federal constitution has at least two levels of government affecting the same land and people, each level has at least one area of action in which it is autonomous and there is some guarantee (even though merely a statement in the constitution) regarding each government’s autonomy. Lijphart (1984) simplifies this concept by suggestion that federalism is a constitutionally guaranteed division of power between central and regional governments. Incidentally, decentralization is commonly defined as “the process of devolving political, fiscal, and administrative powers to subnational units of government” (Burki, Perry, and Dillinger 1999: 3). The similarity between the two concepts is remarkable. Prud’homme (1995: 201) actually defines decentralization using the definition of the theory of pure fiscal federalism: “that is, a system in which pure local governments raise pure local taxes and undertake pure local expenditures without the benefit of central government transfers.” Separating decentralized and centralized states from federal or unitary