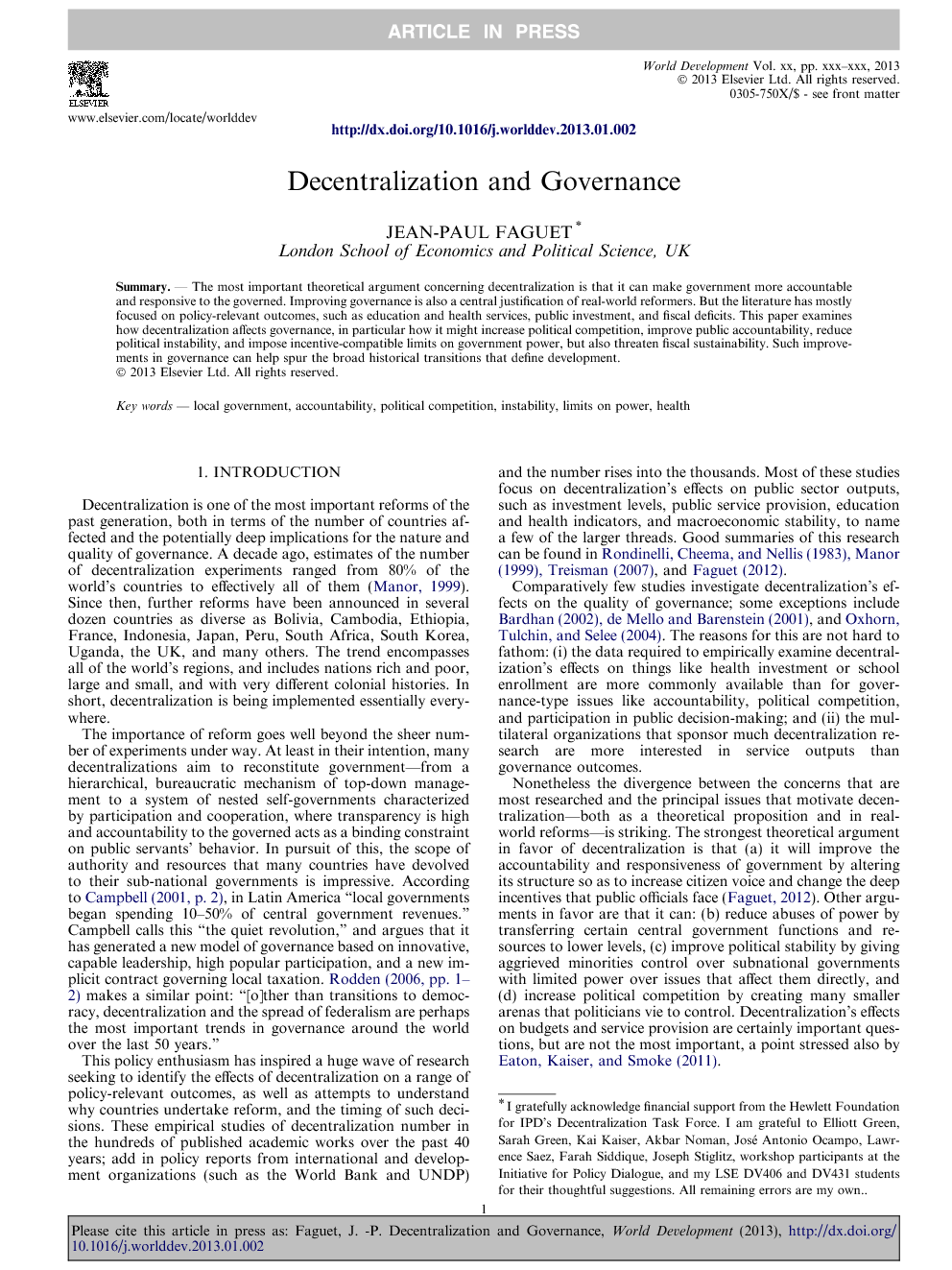 The most important theoretical argument concerning decentralization is that it can make government more accountable and responsive to the governed. Improving governance is also a central justification of real-world reformers. But the literature has mostly focused on policy-relevant outcomes, such as education and health services, public investment, and fiscal deficits. This paper examines how decentralization affects governance, in particular how it might increase political competition, improve public accountability, reduce political instability, and impose incentive-compatible limits on government power, but also threaten fiscal sustainability. Such improvements in governance can help spur the broad historical transitions that define development.

The papers in this special section of World Development examine the results of changing the scale of operation of the institutions concerned with the management of development and environmental resources. The authors scrutinize the effects of policies, particularly those associated with efforts to decentralize political powers, instituted by the state or by international development agencies. They demonstrate how the restructuring of governance arrangements are manifested at different levels of society. Decentralization efforts have occurred in several waves, but most recently, they have become identified with the promotion of efficiency and the enhancement of public services, as well as with support for more open and accountable forms of government (Larson & Ribot, 2004). The studies in this volume offer “grounded” analyses that help understand the successes and failures of these efforts, analyzed primarily (but not exclusively) at the scale of localities and regions. They demonstrate the results of political decentralizations, increased local government autonomy, community management of natural resources, and privatized service delivery. In sum, through a range of case studies, the authors provide strong geographical evidence to challenge some of the orthodoxies of the “good governance” agenda in international development thinking and practice.

“Good governance” offers a clearly framed set of normative ideals for societies and government. The concept is “broad enough to comprise public management as well as political dimensions, while at the same time vague enough to allow a fair measure of discretion and flexibility in interpretation as to what “good governance” would or would not condone” (Doornbos, 2003, p. 7). As a result, it has sufficient rhetorical power to translate into development policy, and indeed many of the architects of normative models of governance are themselves actively involved in development administration. In reviewing the concept, we have highlighted some of the arenas in which “better” governance is believed to reside—particularly in local government and strategies for decentralization—and it is in these same arenas that the potential for its failure is also located. The processes of governance reform are highly influenced by context. Contributors to this collection spell out the different outcomes of the same policy across relatively similar geographical and cultural contexts. Witness, for example, the different forms and severity of corruption present in the different communities surveyed in West Bengal (Véron et al., this issue), surrounding the handling of government Employment Assurance Scheme payments. Or, while the performance of recent water privatization reforms in Mexico may be less than encouraging, the way these reforms are manifested in particular districts and regions is accounted for largely by local politics, the past histories of water supply in those places, and the local outcomes of earlier land reforms upon those places (Wilder and Romero, this issue). The outcomes of reform processes are best viewed as anchored in, but certainly not constrained by, certain places, scales, and historical periods (Wardell & Lund, this issue). “Good governance,” as an ideal, needs to be tailored to local context: and as proponents of participatory development have argued, it needs to be inclusive, as its principles suggest (McLellan & Ngoma, 2004). Nowhere is this clearer than in the case of political decentralization and community-based resource management discussed in this collection: these policy approaches repeatedly fall down on accountability criteria, and the persistence of centralized or elite control. Analysis of these processes, and of their outcomes, needs to be grounded in place and theorized across scales. This is the first lesson arising from the present collection of papers. The second is that since the natural environment is also governed, it too can generate political outcomes. The tools and techniques of political ecology are a vital component in (re)inserting resource management and natural environmental factors into the understanding of governance and its impacts.