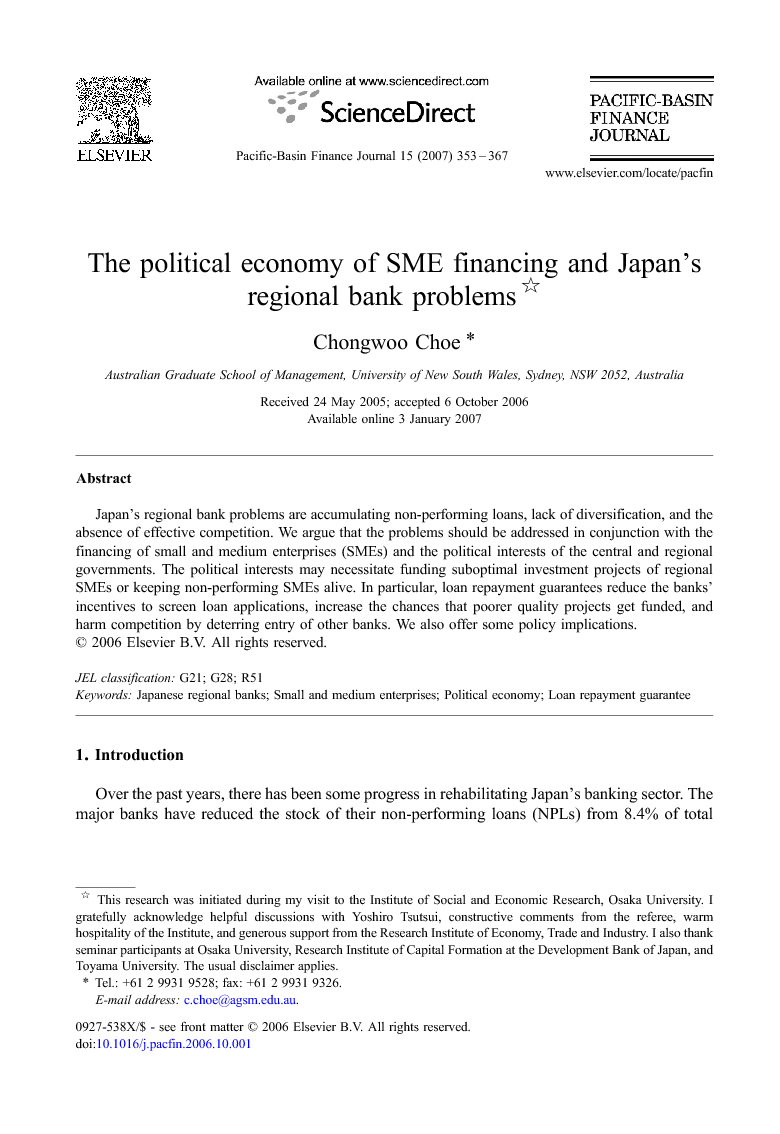 Japan's regional bank problems are accumulating non-performing loans, lack of diversification, and the absence of effective competition. We argue that the problems should be addressed in conjunction with the financing of small and medium enterprises (SMEs) and the political interests of the central and regional governments. The political interests may necessitate funding suboptimal investment projects of regional SMEs or keeping non-performing SMEs alive. In particular, loan repayment guarantees reduce the banks' incentives to screen loan applications, increase the chances that poorer quality projects get funded, and harm competition by deterring entry of other banks. We also offer some policy implications.

Over the past years, there has been some progress in rehabilitating Japan's banking sector. The major banks have reduced the stock of their non-performing loans (NPLs) from 8.4% of total lending in March 2002 to 4.7% in September 2004 (OECD, 2005).1 For the first time in many years, the top six banks, excluding Resona, had reported a combined net profit of 944 billion yen for the period of April–September, 2003, thanks to economic recovery and rising stock prices. Despite decreasing NPLs among large city banks, however, regional banks have been slow in disposing of their bad loans, culminating in the nationalization of Ashikaga Bank in November 2003. As of September 2003, regional banks carry 44% of Japan's NPLs, accounting for 4.6% of their total loans. Concerns over the slow progress in restructuring regional banks have been echoed in the comments by, among others, the OECD and the IMF.2 What are the main problems regional banks are facing? Why have regional banks been slow in reform? What are the obstacles and how can they be addressed? This paper attempts to offer some insight to these questions. The problem of regional banks is inextricably linked to small and medium enterprises (SMEs) in the region. The survival of regional SMEs is in turn closely related to the political interests of local governments. It is thus imperative to understand the nature of relationships among regional banks, SMEs, and local governments. As of March 31, 2004, there are 64 regional banks in Japan.3 Unlike large city banks whose customers are relatively large corporations, regional banks focus their business mainly on retail banking and the majority of their loan customers are SMEs in the region. Although the definition of SMEs varies in different countries,4 SMEs employ roughly a half of the US and two-thirds of the EU workforce. SMEs rely heavily on bank financing. Their share of bank debt to total debt in G10 countries is around double that of large firms and, in some countries, exceeds 60% of all debt. Large part of SMEs' bank debt is from small regional banks (Takats, 2004). In Japan, SMEs account for 99.7% of all enterprises (4.69 million enterprises in 2001), represent 70.2% of all employment (29.96 million people in 2001),5 and their employees constitute 80% of voters. In return, SMEs account for 70 to 80% of the revenue for Japan's regional banks. Table 1 shows the breakdown of total loans to SMEs from various financial institutions.

Despite the sign of rehabilitation in the Japanese banking sector, the problems of regional banks continue to remain as a major concern. The regional bank problems can be summarized as accumulating non-performing loans, the lack of diversification and attendant portfolio risk, and the absence of effective competition. This paper has argued that the regional bank problems should be addressed in conjunction with the financing of regional SMEs and the political interests of the central and regional governments. The political interests may necessitate funding suboptimal investment projects of regional SMEs and keeping non-performing SMEs alive. Through close ties with regional banks, the governments can influence the banks' financing decisions either explicitly or implicitly. In particular, the loan repayment guarantee has been shown to reduce the bank's incentives to screen loan applications, and lead to more investment projects being financed than without the guarantee. This increases the chances that poorer quality projects get funded. It has also been shown that the repayment guarantee harms competition by deterring entry of other banks.