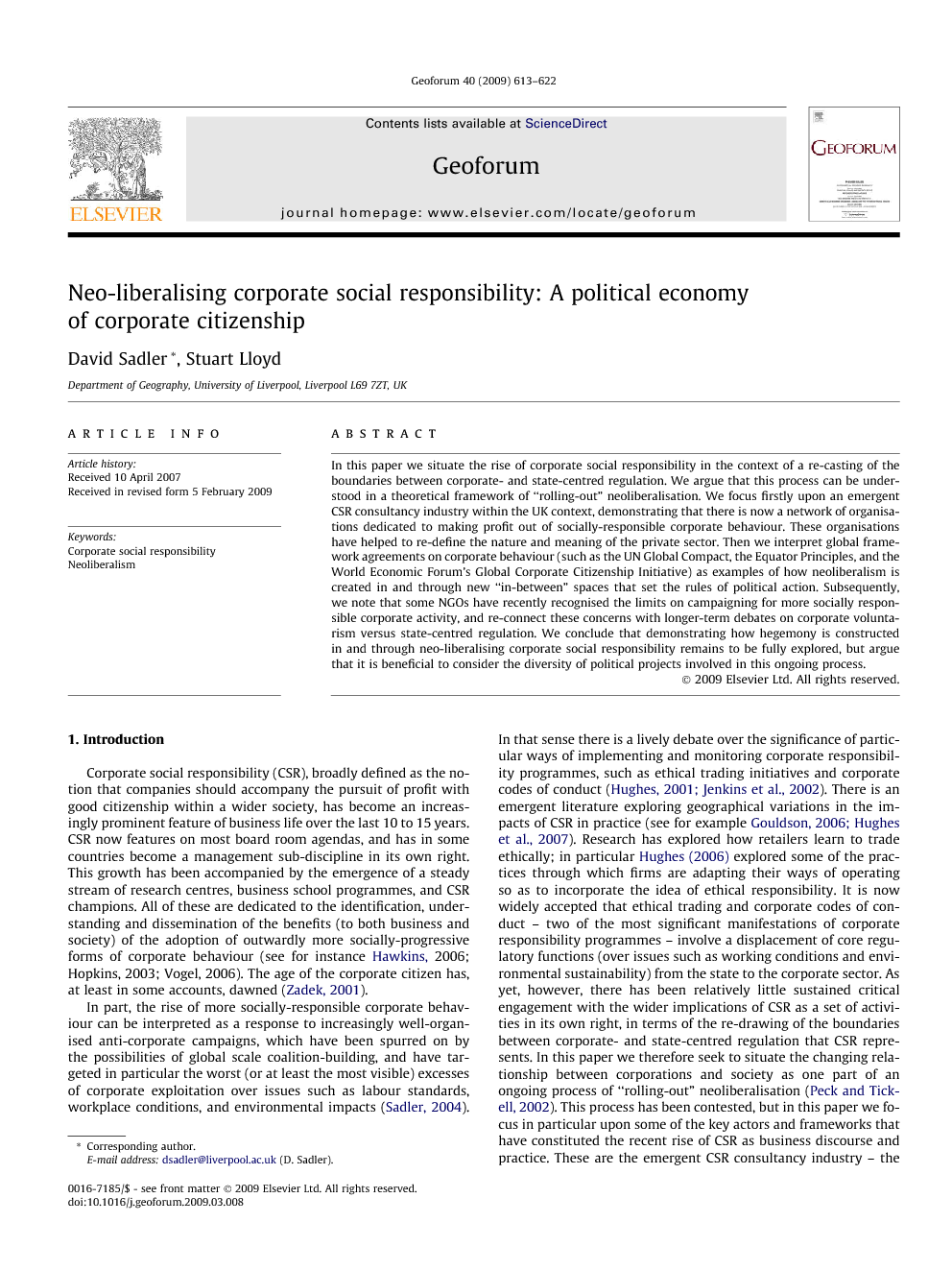 In this paper we situate the rise of corporate social responsibility in the context of a re-casting of the boundaries between corporate- and state-centred regulation. We argue that this process can be understood in a theoretical framework of “rolling-out” neoliberalisation. We focus firstly upon an emergent CSR consultancy industry within the UK context, demonstrating that there is now a network of organisations dedicated to making profit out of socially-responsible corporate behaviour. These organisations have helped to re-define the nature and meaning of the private sector. Then we interpret global framework agreements on corporate behaviour (such as the UN Global Compact, the Equator Principles, and the World Economic Forum’s Global Corporate Citizenship Initiative) as examples of how neoliberalism is created in and through new “in-between” spaces that set the rules of political action. Subsequently, we note that some NGOs have recently recognised the limits on campaigning for more socially responsible corporate activity, and re-connect these concerns with longer-term debates on corporate voluntarism versus state-centred regulation. We conclude that demonstrating how hegemony is constructed in and through neo-liberalising corporate social responsibility remains to be fully explored, but argue that it is beneficial to consider the diversity of political projects involved in this ongoing process.

Corporate social responsibility (CSR), broadly defined as the notion that companies should accompany the pursuit of profit with good citizenship within a wider society, has become an increasingly prominent feature of business life over the last 10 to 15 years. CSR now features on most board room agendas, and has in some countries become a management sub-discipline in its own right. This growth has been accompanied by the emergence of a steady stream of research centres, business school programmes, and CSR champions. All of these are dedicated to the identification, understanding and dissemination of the benefits (to both business and society) of the adoption of outwardly more socially-progressive forms of corporate behaviour (see for instance Hawkins, 2006, Hopkins, 2003 and Vogel, 2006). The age of the corporate citizen has, at least in some accounts, dawned (Zadek, 2001). In part, the rise of more socially-responsible corporate behaviour can be interpreted as a response to increasingly well-organised anti-corporate campaigns, which have been spurred on by the possibilities of global scale coalition-building, and have targeted in particular the worst (or at least the most visible) excesses of corporate exploitation over issues such as labour standards, workplace conditions, and environmental impacts (Sadler, 2004). In that sense there is a lively debate over the significance of particular ways of implementing and monitoring corporate responsibility programmes, such as ethical trading initiatives and corporate codes of conduct (Hughes, 2001 and Jenkins et al., 2002). There is an emergent literature exploring geographical variations in the impacts of CSR in practice (see for example Gouldson, 2006 and Hughes et al., 2007). Research has explored how retailers learn to trade ethically; in particular Hughes (2006) explored some of the practices through which firms are adapting their ways of operating so as to incorporate the idea of ethical responsibility. It is now widely accepted that ethical trading and corporate codes of conduct – two of the most significant manifestations of corporate responsibility programmes – involve a displacement of core regulatory functions (over issues such as working conditions and environmental sustainability) from the state to the corporate sector. As yet, however, there has been relatively little sustained critical engagement with the wider implications of CSR as a set of activities in its own right, in terms of the re-drawing of the boundaries between corporate- and state-centred regulation that CSR represents. In this paper we therefore seek to situate the changing relationship between corporations and society as one part of an ongoing process of “rolling-out” neoliberalisation (Peck and Tickell, 2002). This process has been contested, but in this paper we focus in particular upon some of the key actors and frameworks that have constituted the recent rise of CSR as business discourse and practice. These are the emergent CSR consultancy industry – the firms and organisations that facilitate socially-responsible corporate behaviour through creation of codes of conduct and communications strategies – on the one hand, and the global statements on corporate social and environmental priorities which have become increasingly prevalent on the other. The paper is structured as follows. We develop further the argument that CSR is appropriately understood in terms of the shifting role and nature of private versus public political space. We chart the rise of the CSR consultancy industry in the United Kingdom, identifying the issues that have emerged within a country which has in many ways been at the forefront of these developments. Then we interpret global framework agreements on corporate behaviour as an example of how neoliberalism is created in and through new “in-between” spaces that set the rules of political action. Subsequently, we argue that re-capturing the political economy of CSR necessitates going back to a more critical perspective on the nature of the firm in society. Here, we argue that lessons from an earlier era of debate on global corporations are instructive, and that some NGOs have recently recognised the limits of corporate-centred campaigning. This section also describes some of the tensions and dilemmas that engaging with CSR programmes poses for anti-corporate campaigning organisations. The conclusions pick up on these historical parallels and current debates. We suggest that exploring the diversity of political projects in debates around corporate citizenship is an important area for further research.

This analysis has argued it is no coincidence that CSR debates have been most prominent in the UK and the USA, as these two countries have been at the forefront of “rolling-out” neoliberalisation. We have sought to position the new forms of corporate responsibility and citizenship in the context of a shifting boundary between public and private, and of the creation of the “in-between” spaces of new metrics and principles of voluntary self-regulation by the corporate sector. Two key features of this process, we argue, are the emergence of a CSR “industry” of consultants and advisers, and a series of international framework agreements on corporate behaviour epitomised by the Global Compact, the Equator Principles, and the World Economic Forum’s Global Corporate Citizenship Initiative. There is a view that CSR as presently practised (and preached) in the Anglo-American world is at a decisive moment. From the business perspective, it has been suggested that a crossroads has been reached, from where CSR may either become a routine part of mainstream practice, backed up by government regulation, or be displaced and gradually marginalised (Ward and Smith, 2006). Integrating social and environmental issues into the financial investment sector remains deeply problematic, as it touches at the core of the investment community’s innate short-termism. Campaigning NGOs have become increasingly divided over whether willing engagement in wider corporate projects is likely to contribute to their broader development goals in the long run. The future of CSR, it would seem, is in fact far from guaranteed. Yet CSR has become an intrinsic component of political projects which are closely associated with a re-drawing of what are seen as appropriate forms of market and state intervention. Neo-liberalising corporate social responsibility has been enabled in the UK by the emergence of a new generation of consultancies, themselves largely driven by market forces, whilst the “in-between” spaces of neoliberalism have partly been shaped by new global framework agreements on corporate behaviour. In these ways, neoliberalisation as re-working of state form has taken place. What remains to be explored, to return to our earlier dialogue with Barnett (2005), is precisely how these actors and frameworks shape and influence political subjects, but this is only part of the knowledge gap. A broad range of political projects is at work in the unfolding of global corporate citizenship; some of them mutually reinforcing, some contradictory, all of them worthy of further investigation. The World Economic Forum set out an agenda that neatly intersected with the objective of agencies such as the World Bank for an increased role for the private sector in development. The CSR consultancy industry grew in response to, and supported, the trend towards more socially-responsible corporate behaviour, yet individual consultancies are themselves in competition as they strive to produce the “best” metrics for evaluating the effectiveness of CSR programmes. Last, and by no means least, many campaigning organisations – in their quest for media coverage and political visibility – encouraged the rise of CSR activity, yet in so doing diminished the scope for state regulation and, more recently, opened up tensions within civil society over whether or not to engage further with corporations over CSR. The rise of corporate citizenship has been contributory to a neo-liberalising world, in ways that are far from causally unilinear. More indeed remains to be done to connect the multiple and complex forms of neoliberalism to the formation of social and political consciousness. It is equally important to explore further the trajectory and points of conflict and overlap between the various political projects associated with corporate citizenship.