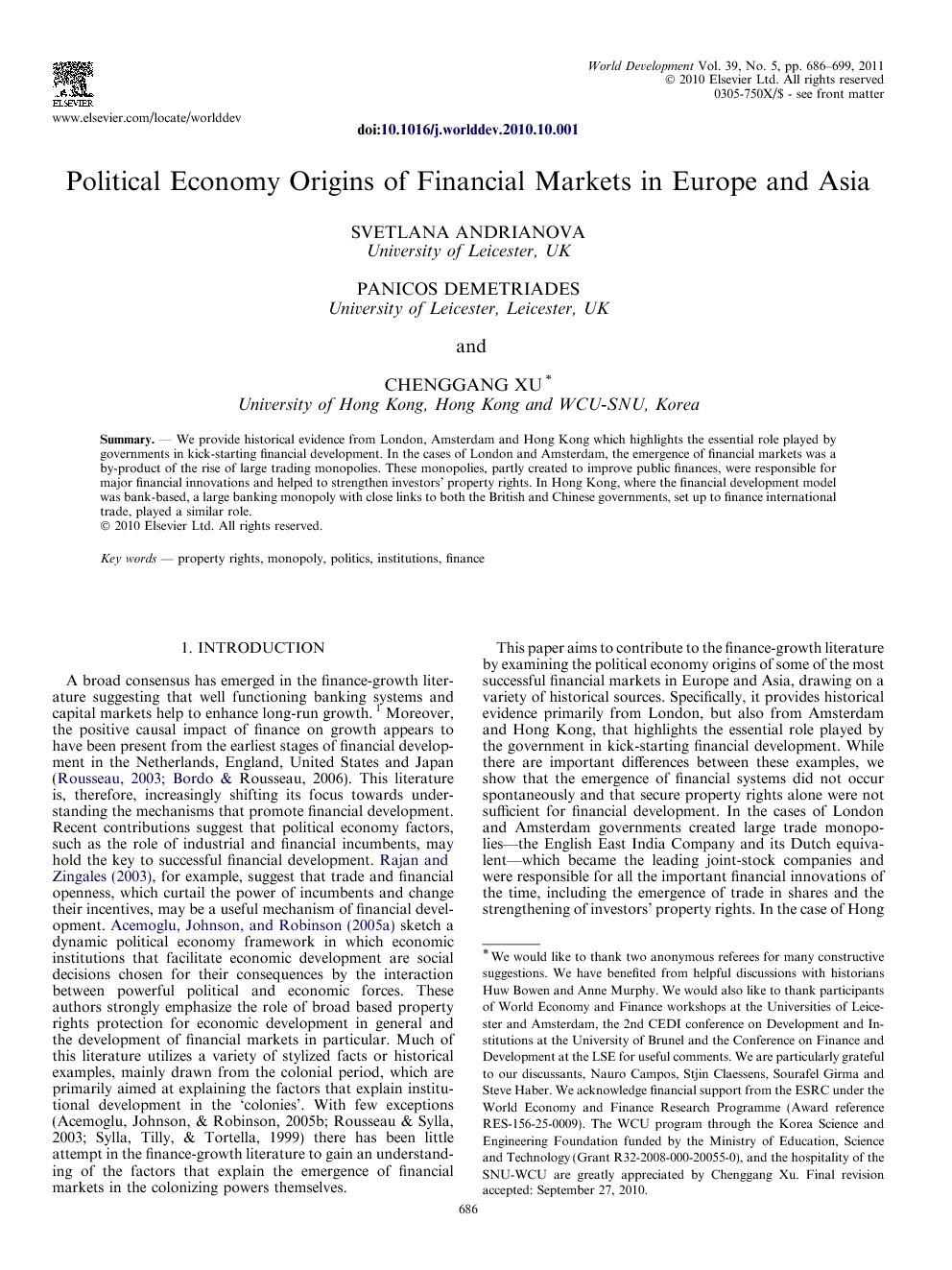 We provide historical evidence from London, Amsterdam and Hong Kong which highlights the essential role played by governments in kick-starting financial development. In the cases of London and Amsterdam, the emergence of financial markets was a by-product of the rise of large trading monopolies. These monopolies, partly created to improve public finances, were responsible for major financial innovations and helped to strengthen investors’ property rights. In Hong Kong, where the financial development model was bank-based, a large banking monopoly with close links to both the British and Chinese governments, set up to finance international trade, played a similar role.

A broad consensus has emerged in the finance-growth literature suggesting that well functioning banking systems and capital markets help to enhance long-run growth.1 Moreover, the positive causal impact of finance on growth appears to have been present from the earliest stages of financial development in the Netherlands, England, United States and Japan (Rousseau, 2003 and Bordo and Rousseau, 2006). This literature is, therefore, increasingly shifting its focus towards understanding the mechanisms that promote financial development. Recent contributions suggest that political economy factors, such as the role of industrial and financial incumbents, may hold the key to successful financial development. Rajan and Zingales (2003), for example, suggest that trade and financial openness, which curtail the power of incumbents and change their incentives, may be a useful mechanism of financial development. Acemoglu, Johnson, and Robinson (2005a) sketch a dynamic political economy framework in which economic institutions that facilitate economic development are social decisions chosen for their consequences by the interaction between powerful political and economic forces. These authors strongly emphasize the role of broad based property rights protection for economic development in general and the development of financial markets in particular. Much of this literature utilizes a variety of stylized facts or historical examples, mainly drawn from the colonial period, which are primarily aimed at explaining the factors that explain institutional development in the ‘colonies’. With few exceptions (Acemoglu et al., 2005b, Rousseau and Sylla, 2003 and Sylla et al., 1999) there has been little attempt in the finance-growth literature to gain an understanding of the factors that explain the emergence of financial markets in the colonizing powers themselves. This paper aims to contribute to the finance-growth literature by examining the political economy origins of some of the most successful financial markets in Europe and Asia, drawing on a variety of historical sources. Specifically, it provides historical evidence primarily from London, but also from Amsterdam and Hong Kong, that highlights the essential role played by the government in kick-starting financial development. While there are important differences between these examples, we show that the emergence of financial systems did not occur spontaneously and that secure property rights alone were not sufficient for financial development. In the cases of London and Amsterdam governments created large trade monopolies—the English East India Company and its Dutch equivalent—which became the leading joint-stock companies and were responsible for all the important financial innovations of the time, including the emergence of trade in shares and the strengthening of investors’ property rights. In the case of Hong Kong, where the financial development model was bank-based, large banking monopolies with close links to the state were created (e.g., the Hongkong and Shanghai Banking Corporation). These were modeled on the Bank of England—itself a banking monopoly for fifty years with close links to government—which also became a template for the development of many other banking systems around the world (Goodhart, 1988). We argue that the three examples we provide in this paper are not special cases. The role of government in the early stages of financial development has been widespread world-wide, including the Italian city-states of Venice and Genoa, the United States, and, more recently, in the newly industrialized East Asian economies of Japan, South Korea and Taiwan. The idea that the government can play an important positive role in the financial system is, of course, not a new one. Stiglitz (1993) examines the role of the state in finance primarily from a modern, albeit developmental, perspective. A number of financial historians emphasize the importance of government in the early stages of financial development. Sylla (1999), for example, demonstrates the dominant role of public finance in shaping the US financial system during 1690–1913. Rousseau and Sylla (2003) provide a number of case studies of financial development in its early stages, including the Dutch state and Great Britain; these highlight the importance of the Dutch and English East India companies and allude to their close links with government, but do not explore the important role of monopolies. Sylla et al. (1999) provide an overview of the role of state from the early stages of the emergence of modern financial systems in England post-1688 and 17th century Netherlands; however, they do not explore the period before 1688 in which trading in shares emerged. Our paper complements these historical studies by exploring the role of both government and trading monopolies in the emergence of financial markets in England during 1672–88. This period is particularly interesting because it was characterized by the collapse of the government’s credibility as a reliable debtor as a result of the temporary suspension of all loan repayments by Charles II in January 1672. We show that, notwithstanding the erosion of property rights of investors vis-á-vis the state this development entailed, financial markets nevertheless emerged as a by-product of the government’s attempt to improve the state of public finances by granting monopoly rights to trading companies. In line with Sylla et al. (1999) we argue that investors saw these companies as offering an attractive combination of expected return, default risk and liquidity. However, in contrast to other studies, we demonstrate that this was already in place before 1688. Moreover, we show that the deeper fundamental that made it possible was the rise of the trading monopolies, which were not only responsible for all the major financial innovations of the time but also helped to strengthen investors’ property rights. The paper is organized as follows. Section 2 documents the emergence of London as a financial market, highlighting its close connection to the rise of trading monopolies. Section 3 delves further into the ways in which the monopolies helped to promote financial development. Section 4 documents the rise of finance in Amsterdam and Hong Kong, and provides an overview of other cases. Finally, Section 5 summarizes and concludes.

This paper provides evidence from historical sources which suggests that the emergence of London and Amsterdam’s financial markets can be ascribed to the rise of large trading monopolies with close links to government. These monopolies were responsible for the main financial innovations that gave rise to the emergence of trading in shares as well as the strengthening of investors’ property rights. We argue that London and Amsterdam were not special cases in the sense that government has played a critical role in the emergence of financial systems worldwide. An important feature of the trading monopolies in London and Amsterdam was their broad based ownership which enabled them to mobilize saving from a wide class of investors. The monopoly position seems to have been critical in enabling them to issue securities with attractive risk-return characteristics, which, as a result, were easily tradable, giving rise to a secondary market. In this context, the establishment of banking monopolies with close links to government seems to have been a natural consequence and it is the prevalence of such monopolies that facilitated the emergence of banking systems worldwide. The evidence presented here also suggests that the London market emerged well before the institutional reform that followed the Glorious Revolution of 1688 in England. We have in fact argued that one of the features of the rise of monopolies was the strengthening of investors’ property rights prior to 1688. Thus, ascribing the emergence of the London stock market to the reforms of 1688 is historically inaccurate. Could the models of Amsterdam and London be mimicked by countries that remain financially underdeveloped today? The VOC and East India models suggest that careful exploitation of a valuable natural resource—trading routes in those cases—may help to mobilize saving and improve public finances, both of which may be critical to kick start financial development. Whether this avenue is open to low income economies in a modern context is an important question for policy makers which warrants further investigation, both theoretically and empirically. A tentative prediction of our analysis is that countries endowed with valuable tradable resources, such as oil or gas, which also have sufficiently secure private property rights may be able to kick start their financial systems through careful government intervention. Specifically, inviting bids for monopoly licenses for the exploitation of such resources from domestic investors could deliver benefits for both the government and domestic private sectors, as long as ownership of such monopolies is broad based. This is an important caveat. If this vital ingredient of the London and Amsterdam models is neglected, the formation of such monopolies would not only fail to mobilize saving but it could also result in the creation of new economic oligarchies that are likely to stifle financial development for a long time. As a final remark, the analysis of the emergence of financial markets in London and Amsterdam and the emergence of banking in Hong Kong, can also be related to recent work by North, Wallis, and Weingast (2009) [henceforth, NWW]. The key concepts in NWW are the “natural state” and the “open access state”. The natural state is characterized by limited access in the sense that it provides order by “using the political system to limit economic entry to create rents, and then using the rents to stabilize the political system and limit violence”. The most important mechanism of a limited access order is to contain violence and to provide social stability and order. Such system, however, fails to achieve sustained economic growth: according to NWW, most contemporary countries, including all developing countries, are natural states. In contrast, an open access state, as the name suggests, is characterized by “open access and entry into economic and political organizations”. Social order in such society is sustained by competition rather than rent-creation. Moreover, an open access state is able to achieve sustained rates of economic growth and development. According to NWW, only about two dozens contemporary countries, such as the US, the major EU countries, and Japan etc., are open access societies. Re-interpreting our work within the NWW framework, our treatment of the political economy of initial financial development in pre-industrial revolution era can be regarded as a successful development being achieved in a “natural state”, which lays the foundations for later transformation of the natural state into an open access society. We show that historically successful initial financial development in the case of London, Amsterdam and Hong Kong started with political protection and monopoly (or oligopoly), and that part of the reason for political protection was to limit competition in order to create rents. In these examples, rent-creation by means of political power has played an important positive role in trade and financial development. Essentially, as we argued above, without this protection or limitation to access, large scale trading and large scale financial development, which provided a base for later industrial revolution, may have never happened. We conjecture that only when financial development has passed a certain threshold does it become beneficial to lower entry barriers to allow for more competition, i.e., open access. Our analysis therefore suggests that certain types of “natural states” may be useful at earlier stages of development since they provide necessary conditions for achieving open access society later. To this extent, our discussion sheds lights on conditions of initial financial development which determines later transformation from the natural state to the open access society. Without this initial financial development, countries even with plenty of wealth and advanced technology (technologies comparable to those developed during the industrial revolution), e.g., a country such as China in the 1200s or in the 1500s and the 1600s, were not able to further develop and were not able to transform from natural state to open access society.