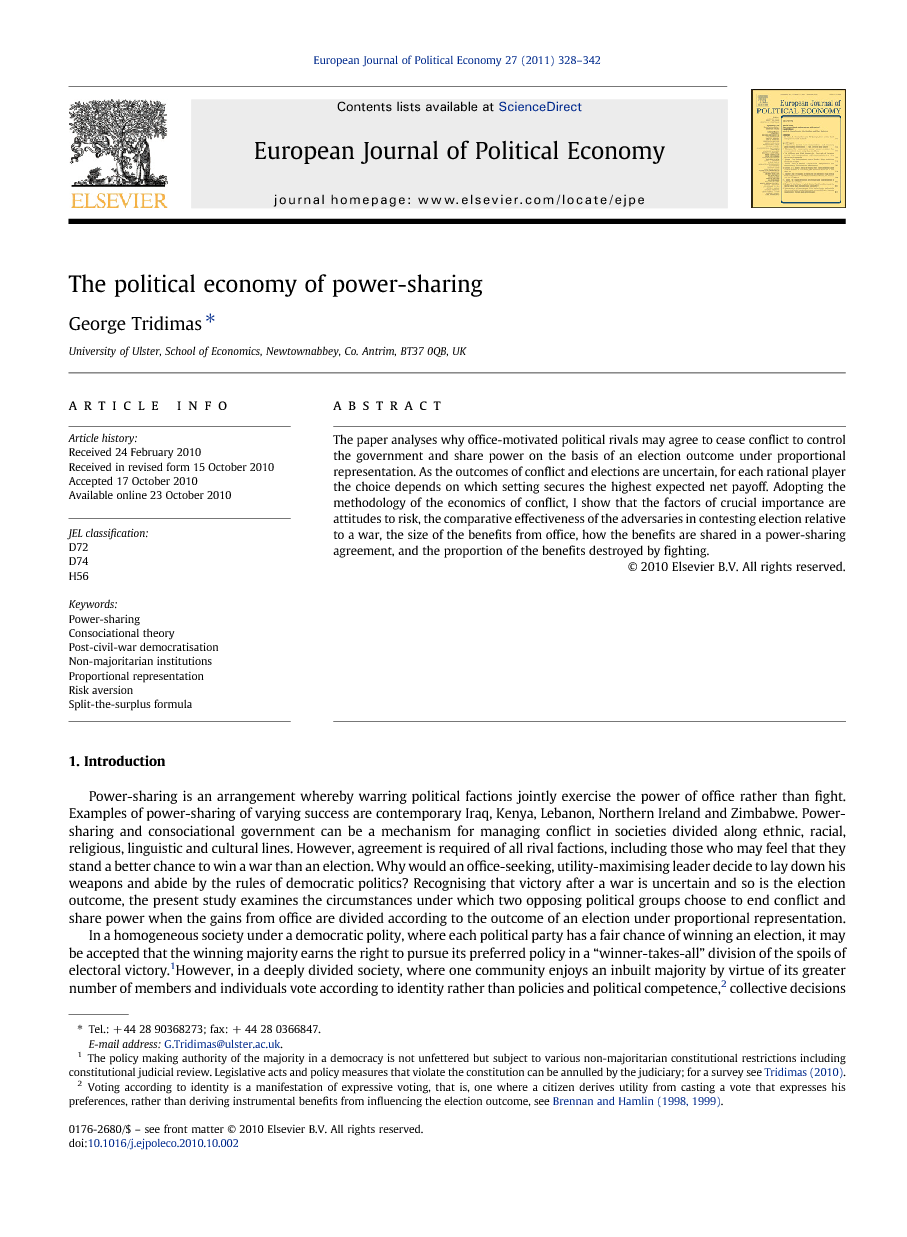 The paper analyses why office-motivated political rivals may agree to cease conflict to control the government and share power on the basis of an election outcome under proportional representation. As the outcomes of conflict and elections are uncertain, for each rational player the choice depends on which setting secures the highest expected net payoff. Adopting the methodology of the economics of conflict, I show that the factors of crucial importance are attitudes to risk, the comparative effectiveness of the adversaries in contesting election relative to a war, the size of the benefits from office, how the benefits are shared in a power-sharing agreement, and the proportion of the benefits destroyed by fighting.

Power-sharing is an arrangement whereby warring political factions jointly exercise the power of office rather than fight. Examples of power-sharing of varying success are contemporary Iraq, Kenya, Lebanon, Northern Ireland and Zimbabwe. Power-sharing and consociational government can be a mechanism for managing conflict in societies divided along ethnic, racial, religious, linguistic and cultural lines. However, agreement is required of all rival factions, including those who may feel that they stand a better chance to win a war than an election. Why would an office-seeking, utility-maximising leader decide to lay down his weapons and abide by the rules of democratic politics? Recognising that victory after a war is uncertain and so is the election outcome, the present study examines the circumstances under which two opposing political groups choose to end conflict and share power when the gains from office are divided according to the outcome of an election under proportional representation. In a homogeneous society under a democratic polity, where each political party has a fair chance of winning an election, it may be accepted that the winning majority earns the right to pursue its preferred policy in a “winner-takes-all” division of the spoils of electoral victory.1 However, in a deeply divided society, where one community enjoys an inbuilt majority by virtue of its greater number of members and individuals vote according to identity rather than policies and political competence,2 collective decisions based on simple majority rule systematically privilege the larger community and permanently exclude the minority from office. In such a setting, simple majority rule outcomes can be expected to be viewed as illegitimate by the losing minority. A sense of injustice combined with related grievances may then lead the minority community to take up arms and seek to take over the state or to secede. Violent conflict and civil war cost lives and property to both rival communities while the outcome is uncertain. Under power-sharing, the electoral majority shares power with the minority and the agreement required to reach decisions generates more moderate outcomes in comparison to a rule that allows decision making to be concentrated in the hands of the winning larger community. The present study leaves the question of the consequences of power-sharing on policy outcomes for future investigation. Power-sharing is a form of insurance against the losses that a minority will incur when the majority rules. Whether or not rational political players respect the power-sharing agreement and abide by its rules depends on whether it is credible and its provisions are enforced, and whether it secures a higher expected payoff for all players than the alternative of war. Credibility depends, amongst other things, on implementation mechanisms, including the presence of a “higher authority”, for example, a foreign power trusted by both parties that has the resources and the will to enforce the terms of the agreement; or a self-enforcement mechanism, as for example when the two adversaries give up their weapons, integrate their military into a united defence force, and set up a single police service and an independent judiciary. My focus is on the determinants of the payoffs from power-sharing given enforceability, and on whether power-sharing is preferable to war and to majoritarian rule. In the tradition of political economy, the issue is not approached as a question of avoiding war and adopting democracy for normative reasons but as one of self-interest. A large literature analysing the benefits of settlement over conflict compares the uncertain outcome of conflict over an asset to the deterministic outcome of dividing that asset. Contrary to this work, the present study compares the uncertain outcome of conflict to the uncertain outcome of an election, which determines how resources are shared between disputants. The paper is structured as follows. The next section discusses the relation of the present study to various strands of research on civil war, power-sharing in democratic government, and electoral rules and coalition formation. Given the voluminous literature, the discussion can only be selective. By way of an example of the workings of a power-sharing arrangement, I provide a brief description of the 1998 peace agreement in Northern Ireland between Unionist-Protestants and Nationalist-Catholics. Section 3 introduces the conceptual framework and studies the circumstances under which two opposing groups lay down their weapons and share power according to their electoral shares. Modelling power-sharing on the basis of proportional representation is sensitive to assumptions about attitudes to risk. Assuming first risk neutrality, I analyse the choices between war and a power-sharing formula based on dividing the gains from peace equally. I then extend the analysis to the case of risk aversion and study when the opponents give up violent conflict and adopt democratic politics under proportional representation. Section 4 concludes. 2. A selective review of civil war and power-sharing Wars are ex post inefficient because of costs of arming, injury and loss of life, and destruction of property. The present study is related to strands of a large political science and economics literature on conflict and civil war, post-civil-war resolution and the debate between consociation and centripetal form of government, and policy making under proportional representation. The following is a selective description of some of the themes in this literature.

My purpose has been to analyse when two office-motivated political rivals agree to give up violent conflict and share power on the basis of their electoral support. In studying the benefits of peace, the existing literature has compared the uncertain outcome of conflict over a resource to the deterministic outcome of sharing the resource according to a division formula. I have extended this framework by comparing the uncertain outcome of conflict to the uncertain outcome of an election that determines how the resource is shared. For each rational political player, the choice between winning office by bullets or the ballot box depends on which setting secures the highest expected net payoff. A model of conflict was analysed using conventional optimization tools and game theory concepts in which the probability of winning the fight is endogenous and depends on the resources expended to fight and the fighting effectiveness of each adversary, and conflict destroys part of the benefits from office. Similarly, when the rivals compete for office through elections, the probability of winning the electoral contest depends on the expenditure spent in the election campaign and the campaign effectiveness of each adversary, but contrary to war the rent from office stays intact. Two formulations of power-sharing were explored. In the first, the adversaries were assumed to be risk neutral and power-sharing was modelled as dividing the benefits of office by granting a share of benefits to the election loser. The share was determined from a division specifying that after the election each side obtained the same gain by avoiding war. It then identified the determinants of the power-sharing variable that would yield higher ex ante payoffs to both the winner and the loser of the elections than fighting. A most interesting result here was that power-sharing that awards the election winner a larger share of power than the election loser is a workable arrangement when either of the two rivals is more effective in both fighting the war and campaigning in elections. Otherwise, one of the rivals expects to be better off by winning the civil war. In the second formulation, the two sides were assumed to be risk averse and when power-sharing was agreed they shared the benefits of office according to their vote shares. Again this allowed identification of the circumstances where both sides choose power-sharing to conflict. It was shown that power-sharing based on vote shares can offer the likely winner of the civil war a higher benefit than military victory and, thus, it can be chosen voluntarily. In addition, the numerical examples suggested that power-sharing is more likely under risk aversion than risk neutrality. The analysis can be extended in several important directions. In the first instance, one may relax the implicit assumption that the two sides can always raise enough funds to pay for their war and election efforts, and explore the constraints on the availability of funds. For example, suppose that either or both combatants are unable to cover their war expenditure but rely on foreign support. In this case, accepting or rejecting power-sharing would depend on exogenous financial factors. A second extension is to inquire into the issue of enforceability of peace agreements; that is once the democratic arrangements are chosen, how are either of the groups prevented from unilaterally arming and appropriating all the rents for themselves? An obvious answer is the presence of a “higher” authority international or otherwise, which polices the agreement. In its absence, peace will have to rely on voluntary, self-enforcing, credible disarmament mechanisms. Related to this is the setting of Garfinkel and Skaperdas, 2007 and Skaperdas, 2008, who introduce a dynamic framework where fighting today permanently eliminates the rival and saves on expenditure for future armaments, while elections have to be fought every period. Accounting for the discounted rewards may change the incentive to compromise and share power. Thirdly, in accordance to the comparative electoral systems literature, and contrary to standard modelling of conflicts, the utility function of each player may be expanded to include policy objectives in addition to the office rent motive. A fourth complication is to introduce intra-group divisions. That is, although it is perfectly sensible to think of two opposing ethnic communities going to war, when peaceful politics prevail, each group may be divided on other non-ethnic issues implying that its members may vote for parties led by politicians others than those leading the war effort, and given proportional representation all those parties are represented in parliament. Yet another extension is to model rents as endogenous to the decision of the office-holder and consider possible differences in the tax and expenditure policies pursued by politicians who win office by the force of arms or by elections.