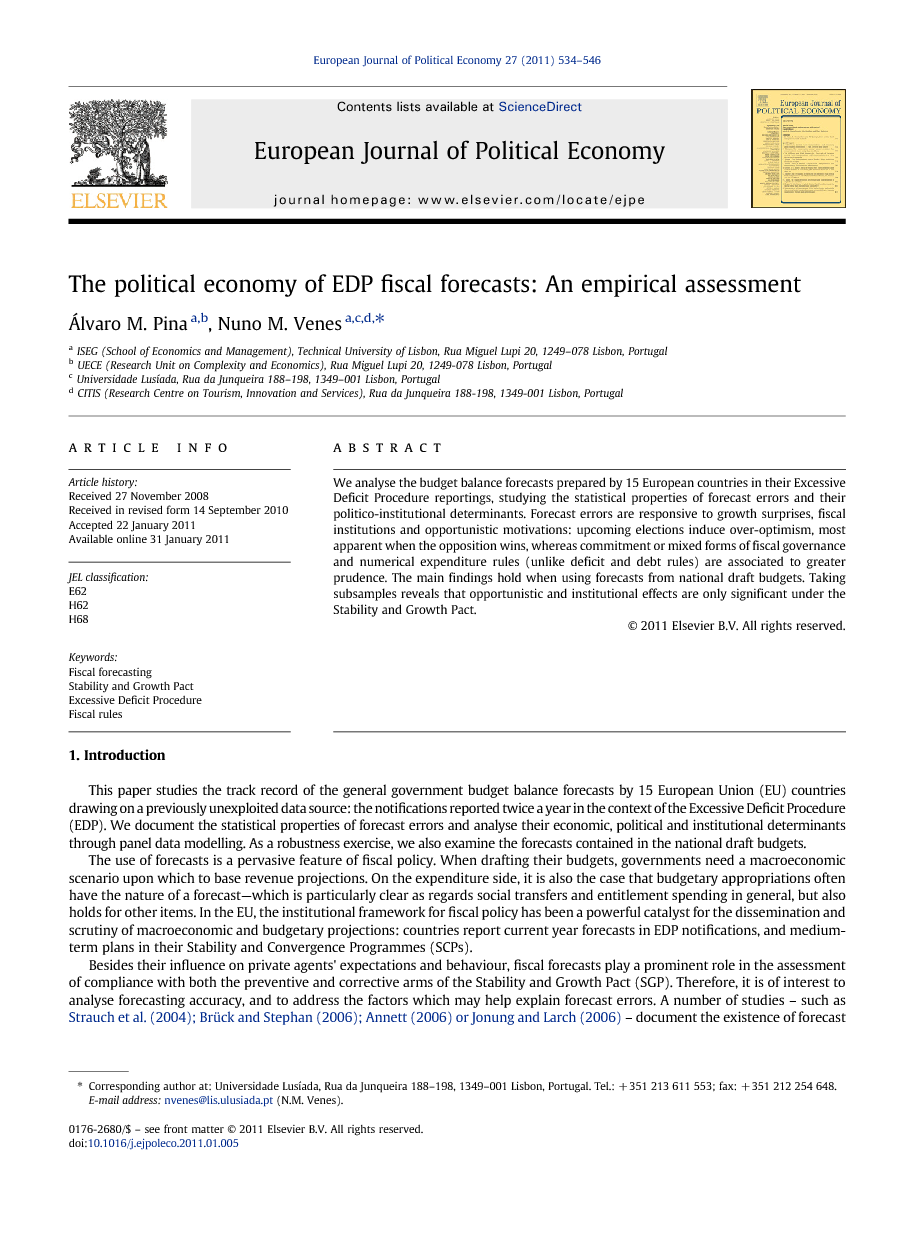 We analyse the budget balance forecasts prepared by 15 European countries in their Excessive Deficit Procedure reportings, studying the statistical properties of forecast errors and their politico-institutional determinants. Forecast errors are responsive to growth surprises, fiscal institutions and opportunistic motivations: upcoming elections induce over-optimism, most apparent when the opposition wins, whereas commitment or mixed forms of fiscal governance and numerical expenditure rules (unlike deficit and debt rules) are associated to greater prudence. The main findings hold when using forecasts from national draft budgets. Taking subsamples reveals that opportunistic and institutional effects are only significant under the Stability and Growth Pact.

This paper studies the track record of the general government budget balance forecasts by 15 European Union (EU) countries drawing on a previously unexploited data source: the notifications reported twice a year in the context of the Excessive Deficit Procedure (EDP). We document the statistical properties of forecast errors and analyse their economic, political and institutional determinants through panel data modelling. As a robustness exercise, we also examine the forecasts contained in the national draft budgets. The use of forecasts is a pervasive feature of fiscal policy. When drafting their budgets, governments need a macroeconomic scenario upon which to base revenue projections. On the expenditure side, it is also the case that budgetary appropriations often have the nature of a forecast—which is particularly clear as regards social transfers and entitlement spending in general, but also holds for other items. In the EU, the institutional framework for fiscal policy has been a powerful catalyst for the dissemination and scrutiny of macroeconomic and budgetary projections: countries report current year forecasts in EDP notifications, and medium-term plans in their Stability and Convergence Programmes (SCPs). Besides their influence on private agents' expectations and behaviour, fiscal forecasts play a prominent role in the assessment of compliance with both the preventive and corrective arms of the Stability and Growth Pact (SGP). Therefore, it is of interest to analyse forecasting accuracy, and to address the factors which may help explain forecast errors. A number of studies – such as Strauch et al., 2004, Brück and Stephan, 2006, Annett, 2006 and Jonung and Larch, 2006 – document the existence of forecast biases in fiscal policy formulation, which vary across countries and time and are influenced by political considerations (e.g. forthcoming elections) or budgetary institutions (e.g. forms of fiscal governance). Forecasts of fiscal variables are prepared by national governments, international organisations and – in some countries – independent institutions, giving rise to several different datasets. Artis and Marcellino (2001) analyse forecasts by the IMF, the OECD and the European Commission; Brück and Stephan (2006) focus on the latter organisation; Strauch et al., 2004, Moulin and Wierts, 2006, Annett, 2006, Hallerberg et al., 2009 and Beetsma et al., 2009 resort to national SCPs. In this study, we draw on different sources of forecasts—EDP notifications, and also national draft budgets. Relative to national budgets or SCPs, EDP data offer the important advantage of a larger sample; in particular, it becomes possible to analyse whether forecasting behaviour changed with the coming into force of the SGP. A number of recent papers have used this dataset: Gordo and Martins (2007) study the magnitude of data revisions, i.e. statistical reliability; Koen and van den Noord, 2006 and Buti et al., 2007 address issues of accounting transparency. Whilst these studies work only with fiscal outturns, we are, to the best of our knowledge, the first to analyse forecasts from the EDP notifications. It also turns out that the strategic nature of EDP forecasts has a strong resemblance to that of figures in national budgets. Apart from drawing on new datasets, this paper contains another innovative contribution. We consider a larger set of possible determinants of fiscal forecast errors, putting together a number of economic and politico-institutional factors that previous analyses had considered separately, as well as testing the significance of some previously unused variables. We find that, besides reflecting GDP growth surprises, budget balance forecast errors are also responsive to the institutional framework of fiscal policy and to opportunistic political motivations. The commitment and mixed forms of fiscal governance (Hallerberg, 2004) are associated to more prudent forecasts, and so is the reliance on stronger expenditure rules. By contrast, upcoming elections tend to induce budget balance forecasts that turn out over-optimistic, especially when the subsequent outcomes are reported under a government dominated by the former opposition. Interestingly, these institutional and political effects were virtually absent before the coming into force of the SGP. The remainder of this paper is structured as follows. The next section describes the datasets of fiscal forecasts and discusses the strategic nature of those projections. Section 3 assesses the statistical properties of forecast errors, through summary statistics and formal tests of unbiasedness and autocorrelation. Section 4 presents an extended set of potential determinants of forecast errors, and reports panel data evidence of their actual impact on fiscal projections. The final section concludes.

In this paper we have assessed fiscal forecasting in 15 EU countries by looking at budgetary projections contained in EDP notifications—a previously unexploited source with important advantages over alternatives. For the ratio of the general government budget balance to GDP, we have documented the statistical properties of forecast errors and performed a panel data analysis of their potential determinants, considering a wide set of economic, political and institutional variables. Budget balance forecast errors respond to growth surprises due to the operation of automatic stabilisers, and tend to be positive (i.e. with outcomes better than projections) when fiscal governance takes the commitment or mixed forms. A higher coverage and strength of national-level expenditure rules are likewise associated to more prudent forecasts. Opportunistic considerations also exert an impact on forecast errors: upcoming elections are associated to forecasts that turn too rosy, especially when the ensuing outcomes are reported by the former opposition. Analysing forecast errors before and after the SGP has come into force reveals that, interestingly, opportunistic political motivations and fiscal institutions only prove significant in the latter subsample. Finally, the coalition or minority nature of a government, its partisanship, the output gap estimates at the time of forecasting and the reliance on national-level deficit or debt rules all fail to exert any significant influence. We have also worked with budget balance forecast errors using data collected from national draft budgets. Despite some minor nuances, the main results are rather robust, which suggests that modelling the forecast errors using data from EDP notifications appears to be a good proxy for modelling with data from national draft budgets. The whole of our analysis suggests that the influence of political and institutional variables on fiscal forecasting strongly increases with the public visibility and policy relevance of such forecasts. A clear illustration is provided by the contrasting results in the subsamples before and after the coming into force of the SGP. The higher the profile of forecasts, the stronger the political pressures are likely to become, and the greater the importance of sound fiscal rules and institutions in delivering a prudent assessment of the fiscal outlook.