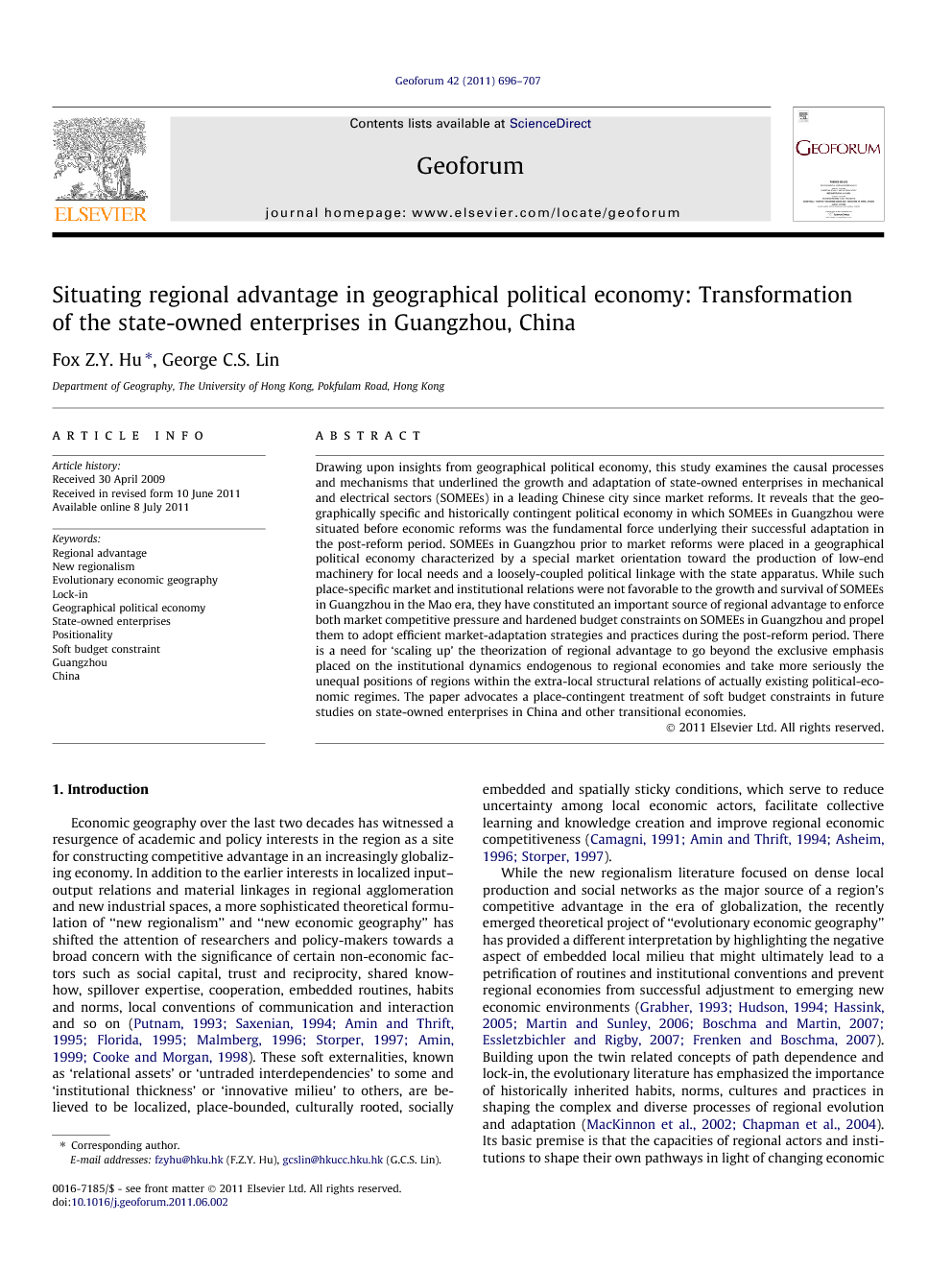 Drawing upon insights from geographical political economy, this study examines the causal processes and mechanisms that underlined the growth and adaptation of state-owned enterprises in mechanical and electrical sectors (SOMEEs) in a leading Chinese city since market reforms. It reveals that the geographically specific and historically contingent political economy in which SOMEEs in Guangzhou were situated before economic reforms was the fundamental force underlying their successful adaptation in the post-reform period. SOMEEs in Guangzhou prior to market reforms were placed in a geographical political economy characterized by a special market orientation toward the production of low-end machinery for local needs and a loosely-coupled political linkage with the state apparatus. While such place-specific market and institutional relations were not favorable to the growth and survival of SOMEEs in Guangzhou in the Mao era, they have constituted an important source of regional advantage to enforce both market competitive pressure and hardened budget constraints on SOMEEs in Guangzhou and propel them to adopt efficient market-adaptation strategies and practices during the post-reform period. There is a need for ‘scaling up’ the theorization of regional advantage to go beyond the exclusive emphasis placed on the institutional dynamics endogenous to regional economies and take more seriously the unequal positions of regions within the extra-local structural relations of actually existing political-economic regimes. The paper advocates a place-contingent treatment of soft budget constraints in future studies on state-owned enterprises in China and other transitional economies.

Drawing upon the theoretical proposition of geographical political economy (Martin and Sunley, 2001, Cumbers et al., 2003, Goodwin, 2004, Jones, 2008, Grabher, 2009, MacKinnon et al., 2009 and Pike et al., 2009), this study examines the nature and dynamics of regional advantage in a different political, economic and organizational context that goes beyond the arena so far occupied by the prevailing literature on new regionalism and regional lock-in. Based on a detailed examination of causal processes and mechanisms underlying the growth and adaptation of SOMEEs in post-reform Guangzhou, this study reveals that what really matters for their more successful adaptation in the post-reform period is not simply relational assets or institutional lock-in as suggested by the extant theoretical model, but more fundamentally is the geographically specific and historically contingent political economy that they were situated in before reforms. In particular, the specific resource and geographical conditions characterizing SOMEEs in Guangzhou had placed them in a disadvantageous position psychologically alienated, functionally disarticulated and institutionally separated from the strategic imperatives of central planners. Situated in such a geographical political economy, SOMEEs in Guangzhou were obligated to embark on a path of self-sustaining growth characterized by specific market orientation toward the production of low-end machinery for local needs and loosely coupled political linkages with the state apparatus. While such place-specific market and institutional relations were not favorable to the growth and survival of SOMEEs in Guangzhou under the Maoist redistributive regime, they had nevertheless constituted an important source of regional advantage that enforced both market competitive pressure and hardened budget constraints on SOMEEs in Guangzhou and propelled them to adopt performance-enhancing market-adaptation strategies and practices in the post-reform era. The case study highlights the need to pay more attention to the extra-local structural relations of actually existing political-economic regimes in the efforts to theorize regional advantage. The outcome of the analysis echoes the recent on-going call for decentering knowledge production and ‘provincializing’ the specificity of the putatively universal ‘Western’ theoretical concepts (Pollard and Samers, 2007, Horschelmann et al., 2008 and Pollard et al., 2009). It suggests that the theoretical proposition of geographical political economy does provide us with a new perspective to make sense of the complex nature of regional economic change in a transitional socialist economy. However, the core issue related to the success or failure of the growth and adaptation of SOEs in the Chinese context is not the hypothesized incentive effect of a region as the site of ‘supply architecture’ that is widely accepted in mainstream economic geography, but instead regionally specific institutional constraints hardening the operational budget of SOEs. It shows that caution must be exercised when the influential economic-geographical theories situated in the Anglo-American context are applied to the experiences and development in ‘other worlds’ such as China (Yeung and Lin, 2003). This study has important implications for the existing studies on the growth dynamics of SOEs in China and other transitional economies. In the voluminous literature on the organizational and institutional features of former socialist economies, the concept of a soft budget constraint has occupied such a center stage that it is commonly invoked as a crucial ingredient for explaining the economic inefficiency of SOEs. Given its prevalence and tenacity in socialist and transitional economies, specialists on China and other transitional economies even argued that “it is not only market economies that have an ‘invisible hand’: the economies of state socialism, too, have self-reproducing institutional mechanisms” (Nee and Stark, 1989, p. 11). However, empirical analysis in this paper suggests that the framework of a soft budget constraint is not in itself adequate to provide a sensible account of the growth and transformation of SOMEEs in Guangzhou, as their budget constraints were hardened by the coupling process between localized capabilities and central state strategy under the Maoist era. In this sense, this study implies that the framework of a soft budget constraint should also pay sufficient attention to local contextual conditions affecting the formation and transformation of a soft budget constraint syndrome among SOEs. In other words, while soft budget constraints matter for the growth dynamics of SOEs, it matters in different ways in different places.