عنوان انگلیسی
The political economy of immigration in a direct democracy: The case of Switzerland
دانلود فوری مقاله + سفارش ترجمه 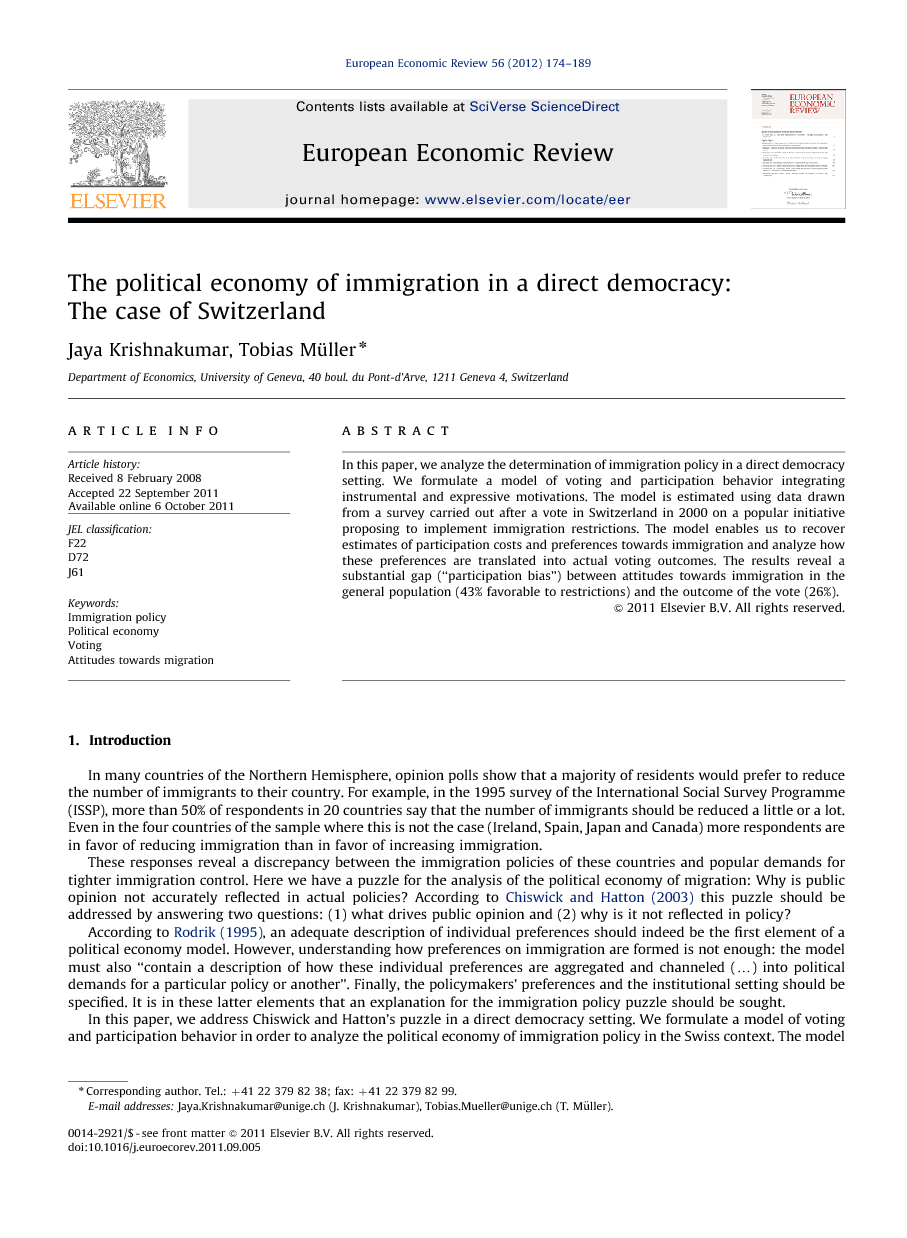 In this paper, we analyze the determination of immigration policy in a direct democracy setting. We formulate a model of voting and participation behavior integrating instrumental and expressive motivations. The model is estimated using data drawn from a survey carried out after a vote in Switzerland in 2000 on a popular initiative proposing to implement immigration restrictions. The model enables us to recover estimates of participation costs and preferences towards immigration and analyze how these preferences are translated into actual voting outcomes. The results reveal a substantial gap (“participation bias”) between attitudes towards immigration in the general population (43% favorable to restrictions) and the outcome of the vote (26%).

In this paper, we analyze the determination of immigration policy in a direct democracy by formulating and estimating a model of participation and voting behavior. The model is used to uncover determinants of attitudes towards immigration, on the one hand, and to analyze the link between attitudes and political outcome, on the other. We account for instrumental and expressive motivations for voting by introducing political identity into the model. The direct democracy in Switzerland provides an institutional context that avoids the hypothetical bias which hampers the analysis of opinion polls. According to our estimations, human capital is an important determinant of attitudes towards immigration. This result is confirmed by the fact that education is only significant in the subsample of individuals in the labor force, which tends to exclude the possibility that our education variable captures other influences such as openness and tolerance towards other cultures. Our results show that Chiswick and Hatton's (2003) observation (as to the discrepancy between immigration policies and popular demands for tighter immigration control) also applies in the direct democracy case where the link between individual attitudes and political outcome is much more direct than in a representative democracy. In the particular vote that we analyze in this paper, there seems to have been a weak mobilization of citizens in favor of immigration restrictions and a relatively strong mobilization of individuals opposed to such restrictions. Our model, and the available data, do not allow to identify the factors that were responsible for this participation bias since it is mainly explained by the positive correlation between the error terms in the voting and participation cost equations. Simulation experiments generalizing postal voting (and introducing e-voting) show that the resulting increase in participation would lead to a slight increase in the percentage of yes-votes without changing the outcome of the vote. Before broader policy conclusions can be drawn from our results, future work should address the question whether the participation bias occurs in other votes on migration issues in Switzerland. One should also be cautious before generalizing our findings to other countries since Switzerland differs from other European countries in several respects.19 First, most immigrants to Switzerland have European origins (there was a large immigration flow from ex-Yougoslavia during the 1990s preceding our vote) and therefore cultural and religious differences were less of an issue than in other European destination countries. Second, the Swiss naturalization law was (and is) among the most restrictive in Europe (an immigrant must have lived for at least 12 years in Switzerland and be well integrated into Swiss society) resulting in comparatively low naturalization rates in the 1990s. Swiss voters might therefore be less concerned about immigrants becoming future citizens than voters in other countries where individual preferences about immigration should take into account the consequences of current decisions on the composition of the future electorate (Ortega, 2005). Third, the direct democratic process analyzed in our paper differs from the political process in representative democracies. It would be interesting to address the question whether the link between individual attitudes and the political outcome differs in the two political systems.