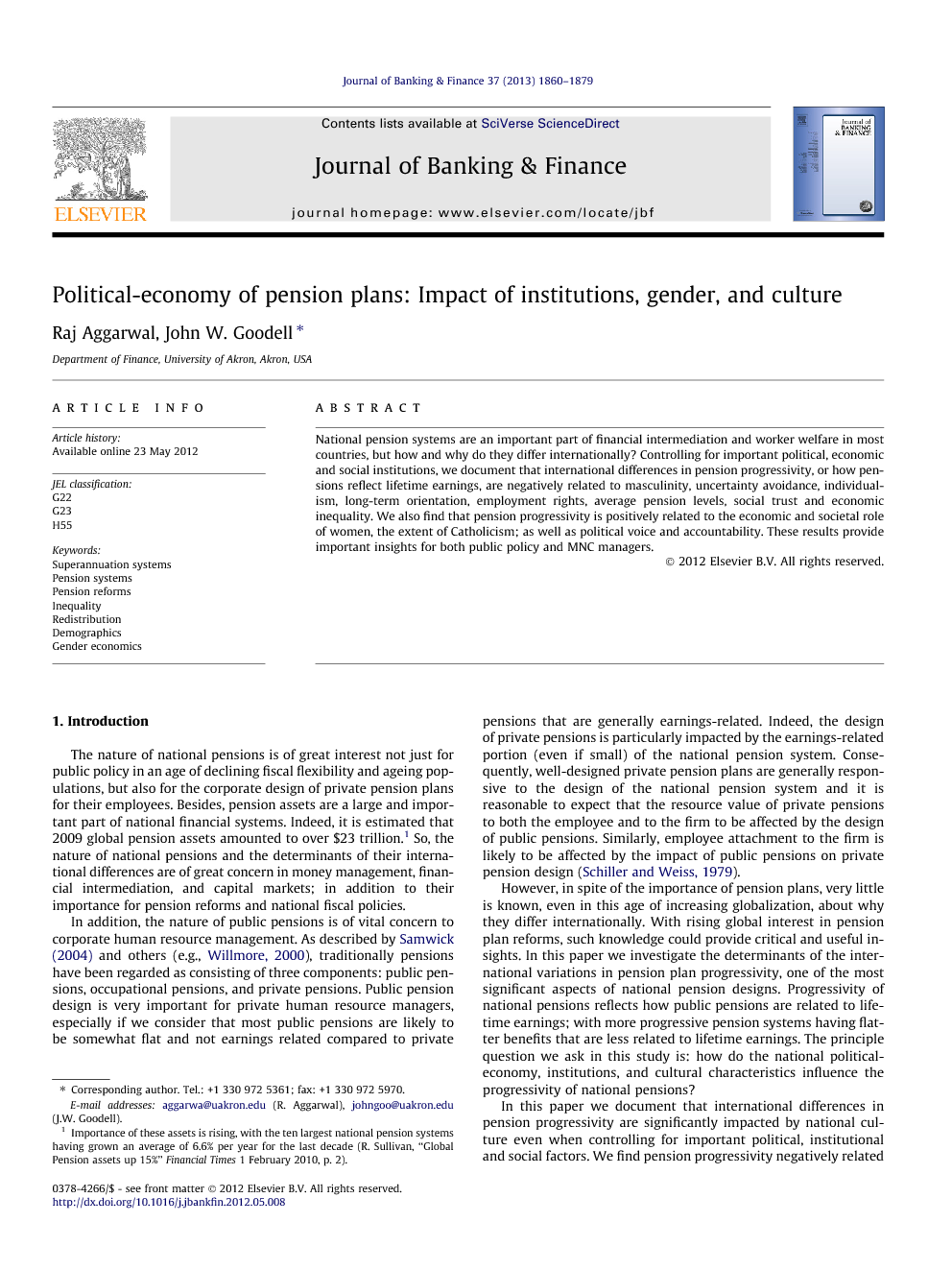 National pension systems are an important part of financial intermediation and worker welfare in most countries, but how and why do they differ internationally? Controlling for important political, economic and social institutions, we document that international differences in pension progressivity, or how pensions reflect lifetime earnings, are negatively related to masculinity, uncertainty avoidance, individualism, long-term orientation, employment rights, average pension levels, social trust and economic inequality. We also find that pension progressivity is positively related to the economic and societal role of women, the extent of Catholicism; as well as political voice and accountability. These results provide important insights for both public policy and MNC managers.

The nature of national pensions is of great interest not just for public policy in an age of declining fiscal flexibility and ageing populations, but also for the corporate design of private pension plans for their employees. Besides, pension assets are a large and important part of national financial systems. Indeed, it is estimated that 2009 global pension assets amounted to over $23 trillion.1 So, the nature of national pensions and the determinants of their international differences are of great concern in money management, financial intermediation, and capital markets; in addition to their importance for pension reforms and national fiscal policies. In addition, the nature of public pensions is of vital concern to corporate human resource management. As described by Samwick (2004) and others (e.g., Willmore, 2000), traditionally pensions have been regarded as consisting of three components: public pensions, occupational pensions, and private pensions. Public pension design is very important for private human resource managers, especially if we consider that most public pensions are likely to be somewhat flat and not earnings related compared to private pensions that are generally earnings-related. Indeed, the design of private pensions is particularly impacted by the earnings-related portion (even if small) of the national pension system. Consequently, well-designed private pension plans are generally responsive to the design of the national pension system and it is reasonable to expect that the resource value of private pensions to both the employee and to the firm to be affected by the design of public pensions. Similarly, employee attachment to the firm is likely to be affected by the impact of public pensions on private pension design (Schiller and Weiss, 1979). However, in spite of the importance of pension plans, very little is known, even in this age of increasing globalization, about why they differ internationally. With rising global interest in pension plan reforms, such knowledge could provide critical and useful insights. In this paper we investigate the determinants of the international variations in pension plan progressivity, one of the most significant aspects of national pension designs. Progressivity of national pensions reflects how public pensions are related to lifetime earnings; with more progressive pension systems having flatter benefits that are less related to lifetime earnings. The principle question we ask in this study is: how do the national political-economy, institutions, and cultural characteristics influence the progressivity of national pensions? In this paper we document that international differences in pension progressivity are significantly impacted by national culture even when controlling for important political, institutional and social factors. We find pension progressivity negatively related to masculinity, uncertainty avoidance, individualism, and social trust. We also find it is positively related to the economic and societal role of women, a more feminine cultural environment, the extent of Catholicism, as well as overall political voice and accountability. We also find that national pension progressivity is negatively related to employment rights, average pension levels, and economic inequality. Further, these results are robust to alternative variable measurements and different estimation techniques. We contend that these robust results regarding the institutional impact on pension plans provides important insights not just for the feasibility of various pension system reforms, but also for money managers and financial intermediation and particularly for MNCs and pension plan managers as they engage with respective external institutional environments.

Most developed (and many developing) economies face significant demographic changes in the form of ageing populations (e.g., Goldstone, 2010, Lee, 2008 and Peterson, 1999). This is the result of both declining birth rates and increasing life expectancies. However, these larger populations of older and retired populations have to be supported by pensions funded by accumulated retirement savings usually supplemented by taxes on working adults (as individual retirement savings are often insufficient). Given projected demographic increases in retired populations, pension system reforms are accelerating as OECD countries try and reduce the rising fiscal burdens of retiree benefits (Lindbeck and Persson, 2003). Pension reforms are important not just for fiscal policy, but also for asset managers and others, as estimated 2009 global pension assets amounted to over $23 trillion. Beyond these enormous public-policy and asset management ramifications of comparative aspects of public-pension schemes, particular attributes of national pensions are also of substantial importance to private businesses because of (1) strong links between private and public pensions; (2) inferences that can be drawn from public policy towards pensions that help organizations engage with external environments; and (3) strong linkage between national preference for redistribution and prosocial attitudes of respective national workforces. One such attribute of pensions is the degree of progressivity or the degree to which public pensions reflect lifetime earnings. However, there is little literature on the degree to which the progressivity of national superannuation and pension systems are determined by other national characteristics. This paper fills that gap in the literature and investigates the empirical determinants of cross-national differences in the progressivity of national pension systems for OECD countries. We document that international differences in pension progressivity are heavily influenced by national institutions as well as gender, culture, social trust, and inequality, i.e., that pension progressivity is significantly impacted by national culture even when controlling for important political, institutional and social factors. Specifically, we find pension progressivity negatively related to masculinity, uncertainty avoidance, individualism, and social trust. We also find it is positively related to the economic and societal role of women, a more feminine cultural environment, the extent of Catholicism, as well as overall political voice and accountability. We also find that pension progressivity is negatively related to employment rights, average pension levels, and economic inequality. These results are robust to alternative measures for important independent variables and alternative estimation techniques. The findings documented here have important public policy implications especially as governments accelerate pension reforms to cope with the rising fiscal burden of retiree benefits and pensions. These results should be useful for designing, selling, and managing pension reforms and related changes in national fiscal policies. Further, these robust results not only provide important insights for the feasibility of various pension system reforms, but they are also directly relevant for MNCs and pension plan managers as they design pension plans for various national subsidiaries and otherwise engage with respective external institutional environments. Similarly, these results should also be of interest to corporate managers as they design subsidiary financing, HRM, and other policies that are consistent with the business environments of the various countries where their MNC operates.