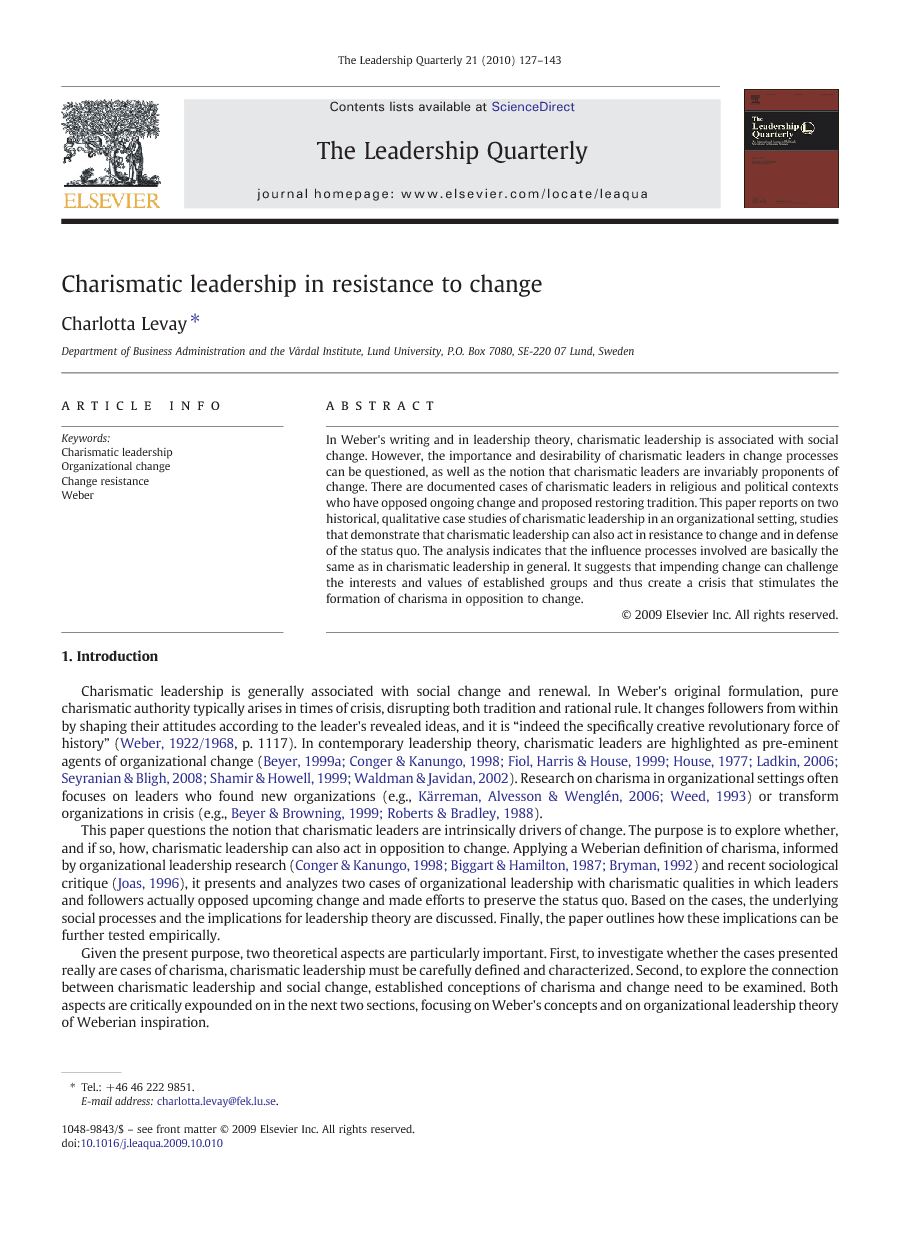 Charismatic leadership is generally associated with social change and renewal. In Weber's original formulation, pure charismatic authority typically arises in times of crisis, disrupting both tradition and rational rule. It changes followers from within by shaping their attitudes according to the leader's revealed ideas, and it is “indeed the specifically creative revolutionary force of history” (Weber, 1922/1968, p. 1117). In contemporary leadership theory, charismatic leaders are highlighted as pre-eminent agents of organizational change (Beyer, 1999a, Conger and Kanungo, 1998, Fiol et al., 1999, House, 1977, Ladkin, 2006, Seyranian and Bligh, 2008, Shamir and Howell, 1999 and Waldman and Javidan, 2002). Research on charisma in organizational settings often focuses on leaders who found new organizations (e.g., Kärreman et al., 2006 and Weed, 1993) or transform organizations in crisis (e.g., Beyer and Browning, 1999 and Roberts and Bradley, 1988). This paper questions the notion that charismatic leaders are intrinsically drivers of change. The purpose is to explore whether, and if so, how, charismatic leadership can also act in opposition to change. Applying a Weberian definition of charisma, informed by organizational leadership research (Conger and Kanungo, 1998, Biggart and Hamilton, 1987 and Bryman, 1992) and recent sociological critique (Joas, 1996), it presents and analyzes two cases of organizational leadership with charismatic qualities in which leaders and followers actually opposed upcoming change and made efforts to preserve the status quo. Based on the cases, the underlying social processes and the implications for leadership theory are discussed. Finally, the paper outlines how these implications can be further tested empirically. Given the present purpose, two theoretical aspects are particularly important. First, to investigate whether the cases presented really are cases of charisma, charismatic leadership must be carefully defined and characterized. Second, to explore the connection between charismatic leadership and social change, established conceptions of charisma and change need to be examined. Both aspects are critically expounded on in the next two sections, focusing on Weber's concepts and on organizational leadership theory of Weberian inspiration.

To conclude, this paper has questioned the established notion that charismatic leaders are always agents of change. This has been done theoretically, by identifying some limits to the significance and desirability of charismatic leadership in change processes and by examining the documented existence of a mixed type of charismatic leader who advocates a return to tradition. It has also been done empirically, in two historical, qualitative case studies. The case studies demonstrate that charismatic leadership can also act in resistance to change and in defense of the status quo. Based on the analysis of the cases, the underlying social processes have been outlined, and it has been suggested that such leadership is not essentially different from charismatic leadership for change. Organizational change can cause anxieties and/or challenge the interests of influential groups and hence produce a crisis, which is fertile ground for charisma. In such situations, a leader who proposes a credible and inspiring vision of how to resist change and preserve the status quo can become the object of charismatic attributions. The leader's influence is thus exerted not despite but through charismatic processes. So, charismatic leadership in resistance to change and in defense of the status quo can arise when a relatively influential group perceives an ongoing or upcoming change as a threat to their common interests and identity. Finally, these suggestions have been summarized in testable propositions, and it has been discussed how they may be tested further empirically through laboratory experiments and case studies.