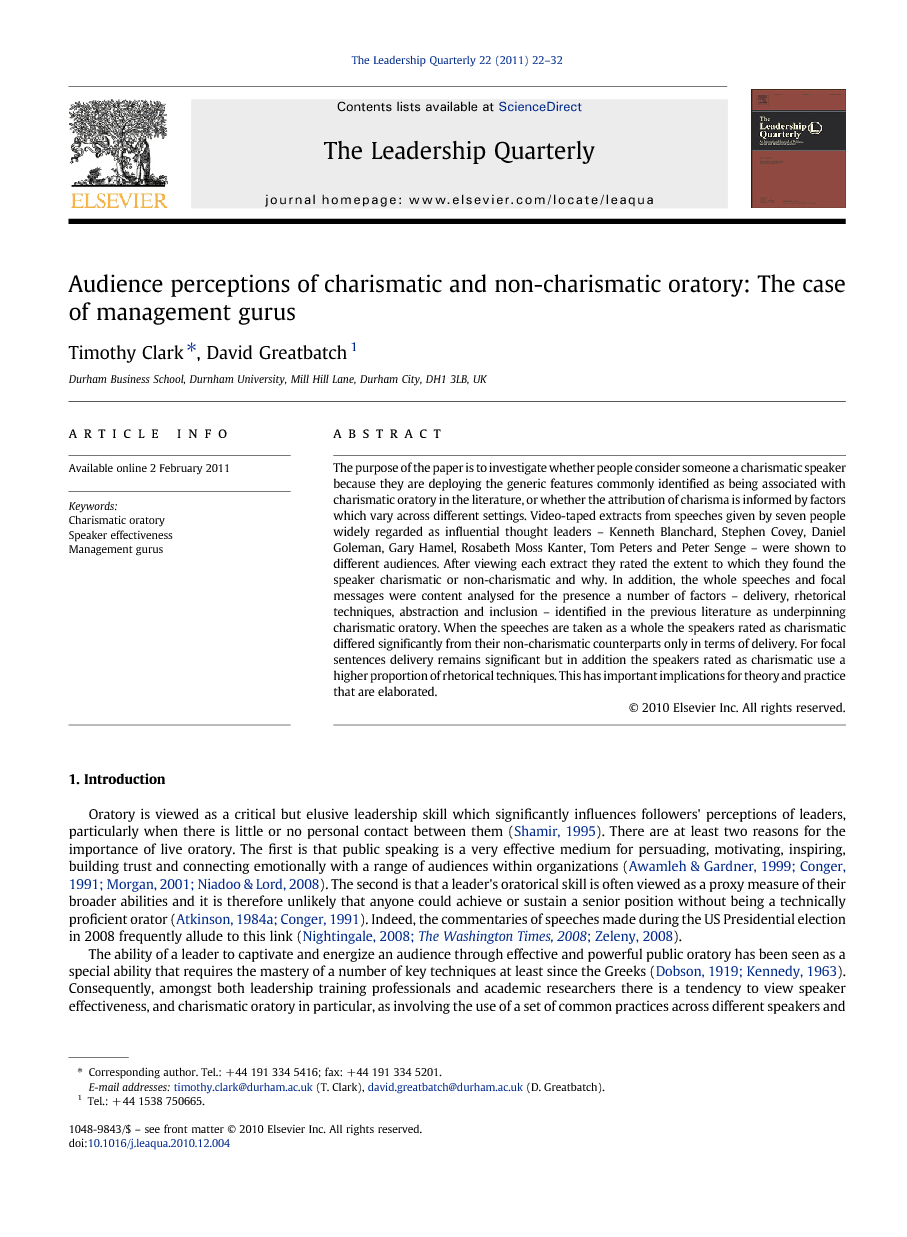 The purpose of the paper is to investigate whether people consider someone a charismatic speaker because they are deploying the generic features commonly identified as being associated with charismatic oratory in the literature, or whether the attribution of charisma is informed by factors which vary across different settings. Video-taped extracts from speeches given by seven people widely regarded as influential thought leaders – Kenneth Blanchard, Stephen Covey, Daniel Goleman, Gary Hamel, Rosabeth Moss Kanter, Tom Peters and Peter Senge – were shown to different audiences. After viewing each extract they rated the extent to which they found the speaker charismatic or non-charismatic and why. In addition, the whole speeches and focal messages were content analysed for the presence a number of factors – delivery, rhetorical techniques, abstraction and inclusion – identified in the previous literature as underpinning charismatic oratory. When the speeches are taken as a whole the speakers rated as charismatic differed significantly from their non-charismatic counterparts only in terms of delivery. For focal sentences delivery remains significant but in addition the speakers rated as charismatic use a higher proportion of rhetorical techniques. This has important implications for theory and practice that are elaborated.

Oratory is viewed as a critical but elusive leadership skill which significantly influences followers' perceptions of leaders, particularly when there is little or no personal contact between them (Shamir, 1995). There are at least two reasons for the importance of live oratory. The first is that public speaking is a very effective medium for persuading, motivating, inspiring, building trust and connecting emotionally with a range of audiences within organizations (Awamleh and Gardner, 1999, Conger, 1991, Morgan, 2001 and Niadoo and Lord, 2008). The second is that a leader's oratorical skill is often viewed as a proxy measure of their broader abilities and it is therefore unlikely that anyone could achieve or sustain a senior position without being a technically proficient orator (Atkinson, 1984a and Conger, 1991). Indeed, the commentaries of speeches made during the US Presidential election in 2008 frequently allude to this link (Nightingale, 2008, The Washington Times, 2008 and Zeleny, 2008). The ability of a leader to captivate and energize an audience through effective and powerful public oratory has been seen as a special ability that requires the mastery of a number of key techniques at least since the Greeks (Dobson, 1919 and Kennedy, 1963). Consequently, amongst both leadership training professionals and academic researchers there is a tendency to view speaker effectiveness, and charismatic oratory in particular, as involving the use of a set of common practices across different speakers and settings. Management training courses often equate effective oratory with a single dynamic charismatic style (e.g., Frese, Beimel & Schoenborn, 2003). Much prior research has been founded on experimental studies which often begin with definitions of charismatic and non-charismatic oratory that assume a common style across different speakers, audiences and contexts (e.g., Awamleh and Gardner, 1999, Howell and Frost, 1989 and Kirkpatrick and Locke, 1996). However, there is evidence to suggest that participants in such studies cannot always distinguish between ‘pre-defined’ charismatic and non-charismatic speaking styles (Kirkpatrick & Locke, 1996). This raises serious questions about the extent to which perceptions of speaker charisma are in fact informed by a set of common factors which do not vary across speakers and contexts. In this paper we therefore ask whether people consider someone a charismatic speaker because they are deploying the generic features commonly identified as being associated with charismatic oratory in the literature, or whether the attribution of charisma is informed by factors which vary across different settings. We explore this issue by focusing on a group of successful and very prominent thought leaders who build and sustain follower commitment to their ideas through writing best-selling management books and giving public speeches on the international lecture circuit. In the context of the general issue which forms the basis of this article they are a particularly pertinent group to focus on since they are widely considered to be very effective and charismatic speakers and their live talks are critical to their ability to build and sustain followers (Baur, 1994, Clark and Salaman, 1996, Clark and Salaman, 1998 and Huczynski, 1993; Jackson, 2001 and Jackson, 2002). To a large extent the continuing authority and legitimacy of their ideas is intimately linked to their personal communication and impression management abilities (Conger and Kanungo, 1988, Gardner and Avolio, 1998, Greatbatch and Clark, 2003 and Greatbatch and Clark, 2005). Along with certain kinds of political and religious leaders, they are almost a pure form of what has been termed “rhetorical leadership” (Dorsey, 2002, Tulis, 1987 and Willner, 1984). In this respect they are leadership orators par excellence. That is their relationship with their followers is based upon the continuing communication of a message which in turn ‘relies for its authorization upon the individual who developed and popularized it’ (Huczynski, 1993: 38). They are therefore thought leaders in the sense that they exercise ‘a profound influence on followers by the strength of their personal abilities’ particularly via their oratory (House & Baetz, 1979, p. 399). The article is structured as follows. We begin with a discussion of the key factors that have been identified as underpinning effective/charismatic oratory. We then discuss our methods and results before identifying the ways in which the paper contributes to theory and practice.