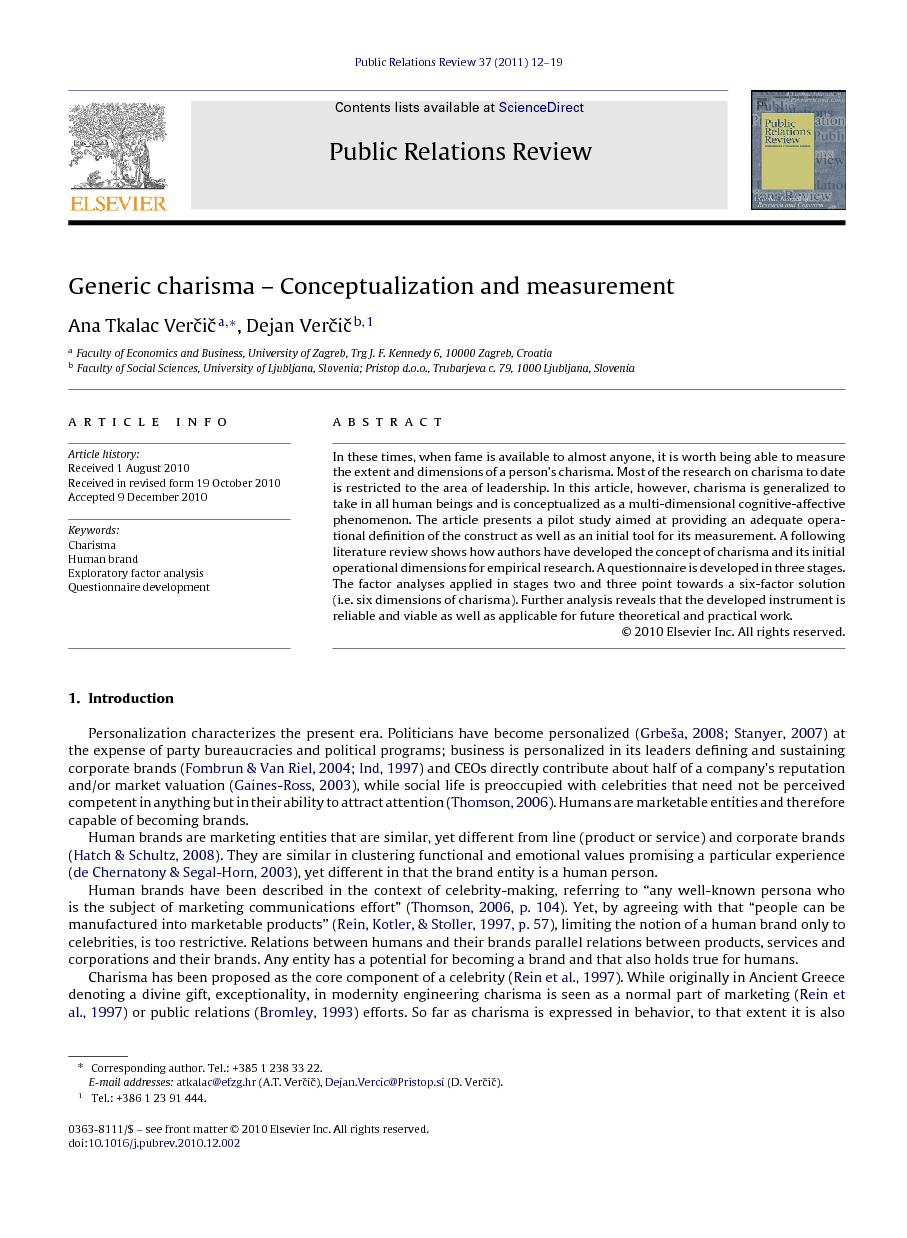 In these times, when fame is available to almost anyone, it is worth being able to measure the extent and dimensions of a person's charisma. Most of the research on charisma to date is restricted to the area of leadership. In this article, however, charisma is generalized to take in all human beings and is conceptualized as a multi-dimensional cognitive-affective phenomenon. The article presents a pilot study aimed at providing an adequate operational definition of the construct as well as an initial tool for its measurement. A following literature review shows how authors have developed the concept of charisma and its initial operational dimensions for empirical research. A questionnaire is developed in three stages. The factor analyses applied in stages two and three point towards a six-factor solution (i.e. six dimensions of charisma). Further analysis reveals that the developed instrument is reliable and viable as well as applicable for future theoretical and practical work.

Personalization characterizes the present era. Politicians have become personalized (Grbeša, 2008 and Stanyer, 2007) at the expense of party bureaucracies and political programs; business is personalized in its leaders defining and sustaining corporate brands (Fombrun and Van Riel, 2004 and Ind, 1997) and CEOs directly contribute about half of a company's reputation and/or market valuation (Gaines-Ross, 2003), while social life is preoccupied with celebrities that need not be perceived competent in anything but in their ability to attract attention (Thomson, 2006). Humans are marketable entities and therefore capable of becoming brands. Human brands are marketing entities that are similar, yet different from line (product or service) and corporate brands (Hatch & Schultz, 2008). They are similar in clustering functional and emotional values promising a particular experience (de Chernatony & Segal-Horn, 2003), yet different in that the brand entity is a human person. Human brands have been described in the context of celebrity-making, referring to “any well-known persona who is the subject of marketing communications effort” (Thomson, 2006, p. 104). Yet, by agreeing with that “people can be manufactured into marketable products” (Rein, Kotler, & Stoller, 1997, p. 57), limiting the notion of a human brand only to celebrities, is too restrictive. Relations between humans and their brands parallel relations between products, services and corporations and their brands. Any entity has a potential for becoming a brand and that also holds true for humans. Charisma has been proposed as the core component of a celebrity (Rein et al., 1997). While originally in Ancient Greece denoting a divine gift, exceptionality, in modernity engineering charisma is seen as a normal part of marketing (Rein et al., 1997) or public relations (Bromley, 1993) efforts. So far as charisma is expressed in behavior, to that extent it is also susceptible to training (Bromley, 1993). Furthermore, stores are full of handbooks offering how-to advice literally to anybody (see Nessmann, 2009, for a list of self-help literature). Secularizing charisma enables the application of the construct to any human person to a varying degree. Yet, the problem is that there is no adequate operational definition of the construct or a tool for its measurement. Through an analysis of previous research on charisma this study proposes a conceptual framework for examining generic charisma. The proposed framework is derived from theories in political science, sociology, social psychology and leadership studies. This framework further guides the development of a scale for generic charisma through a series of validation studies. A standardized scale for generic charisma offers numerous implications for research and practice in various areas of business.

The research reported here represents an initial effort to conceptualize and measure a concept of generic charisma. Even though this concept has been developed and measured in the area of leadership studies, it has never been applied to other public personas. New trends in using people as brands and their images as representations of organizations, products or political parties, makes this area an interesting new venue for research. This study not only aims to conceptualize (and extend) the area of generic charisma, but also to develop a framework for its measurement. In analyzing the existing measurement instruments in the area of leadership, the article shows that none of mentioned scales can be used adequately for this particular new concept and by this demonstrates a need for a new scale for its measurement. Through the development and application of this new instrument, research shows that the concept of generic charisma (as defined by the study) is a multidimensional concept and should be further investigated as such. Since the empirical research reported examines a relatively new and undeveloped concept it has certain methodological limitations. In spite of the fact that the reported study is based on extensive empirical analysis, the final questionnaire (as well as the final concept of charisma) should be researched further. The most obvious problem is the determination of the construct validity of the questionnaire. Since the concept in the newly proposed meaning has not been researched in the past it will be a matter of further study to evaluate and elaborate the idea further. Some of the methodological questions can also be solved by repeated applications of the questionnaire in different populations and also different social settings, also in different languages and cultures. In further exploration of the generic charisma it is necessary to reexamine the conceptualization as well as its dimensions. As a substantial part of educational and professional development is becoming re-organized in self-addressed, also critical and reflexive, project management and post-modern humans are partially becoming collections of portfolio identities that are also branded; the charismatic content of their branded identity will be gaining in importance. Measuring generic charisma is the first step towards its management.