عنوان انگلیسی
The flight of the eagle: The charismatic leadership of Sá Carneiro in Portugal's transition to democracy
دانلود فوری مقاله + سفارش ترجمه 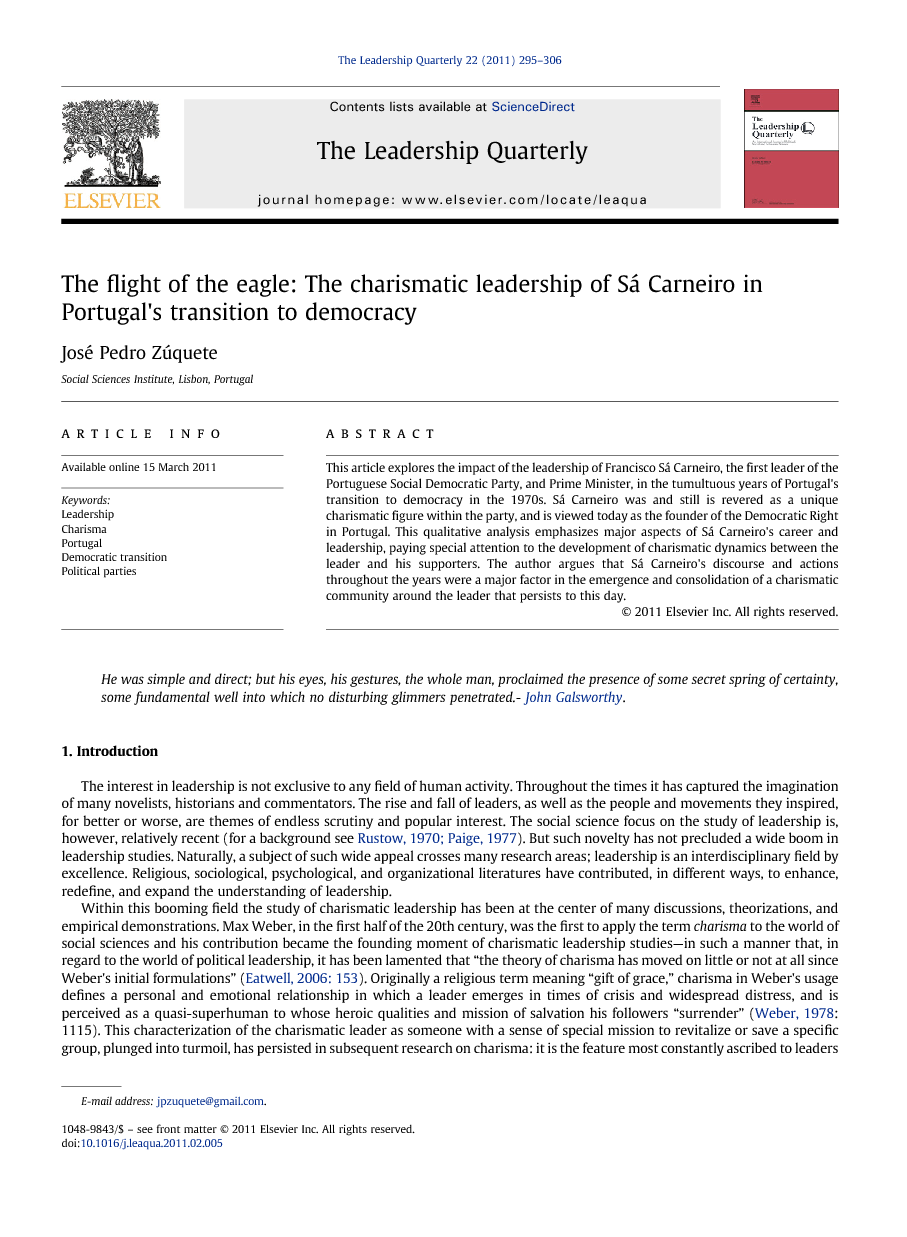 This article explores the impact of the leadership of Francisco Sá Carneiro, the first leader of the Portuguese Social Democratic Party, and Prime Minister, in the tumultuous years of Portugal's transition to democracy in the 1970s. Sá Carneiro was and still is revered as a unique charismatic figure within the party, and is viewed today as the founder of the Democratic Right in Portugal. This qualitative analysis emphasizes major aspects of Sá Carneiro's career and leadership, paying special attention to the development of charismatic dynamics between the leader and his supporters. The author argues that Sá Carneiro's discourse and actions throughout the years were a major factor in the emergence and consolidation of a charismatic community around the leader that persists to this day.

Throughout this paper I showed that, although charisma should be understood above all as a relationship – one that only exists in the interaction between leader and followers – the “art of leadership,” witnessed in and acting through the discourse and actions of Sá Carneiro, played an important role in this generation of charisma. In my leader-oriented approach I aimed to show how the leader was an “active initiator or catalyst of charismatically oriented perceptions of himself” (Willner, 1984: 44) even before the crisis-situation. If it is true that he despised revolutionary excesses the leader was not a simple reformist; as a charismatic leader he demonstrated his leadership qualities while founding and fuelling a “movement for change” against the status quo and in the process that summoned people to join in and devote themselves to the mission (Tucker, 1968: 737). In this break with the past and irruption of novelty lies what Weber deemed the “revolutionary character” (1978: 1115) of charismatic authority and of the mission announced by the leader. In a time of “extraordinary events,” Sá Carneiro announced a goal to be reached, organized, and empowered a group of followers; led a movement for change; and was believed to embody in himself the mission of the party. The “star” did not merely step into a role that the audience had made: the role was also of his own creation. Throughout he exuded for his followers a magnetic personality and an exemplary behavior that invested his leadership with a sacred authority that, in typical charismatic fashion, continued after his departure.