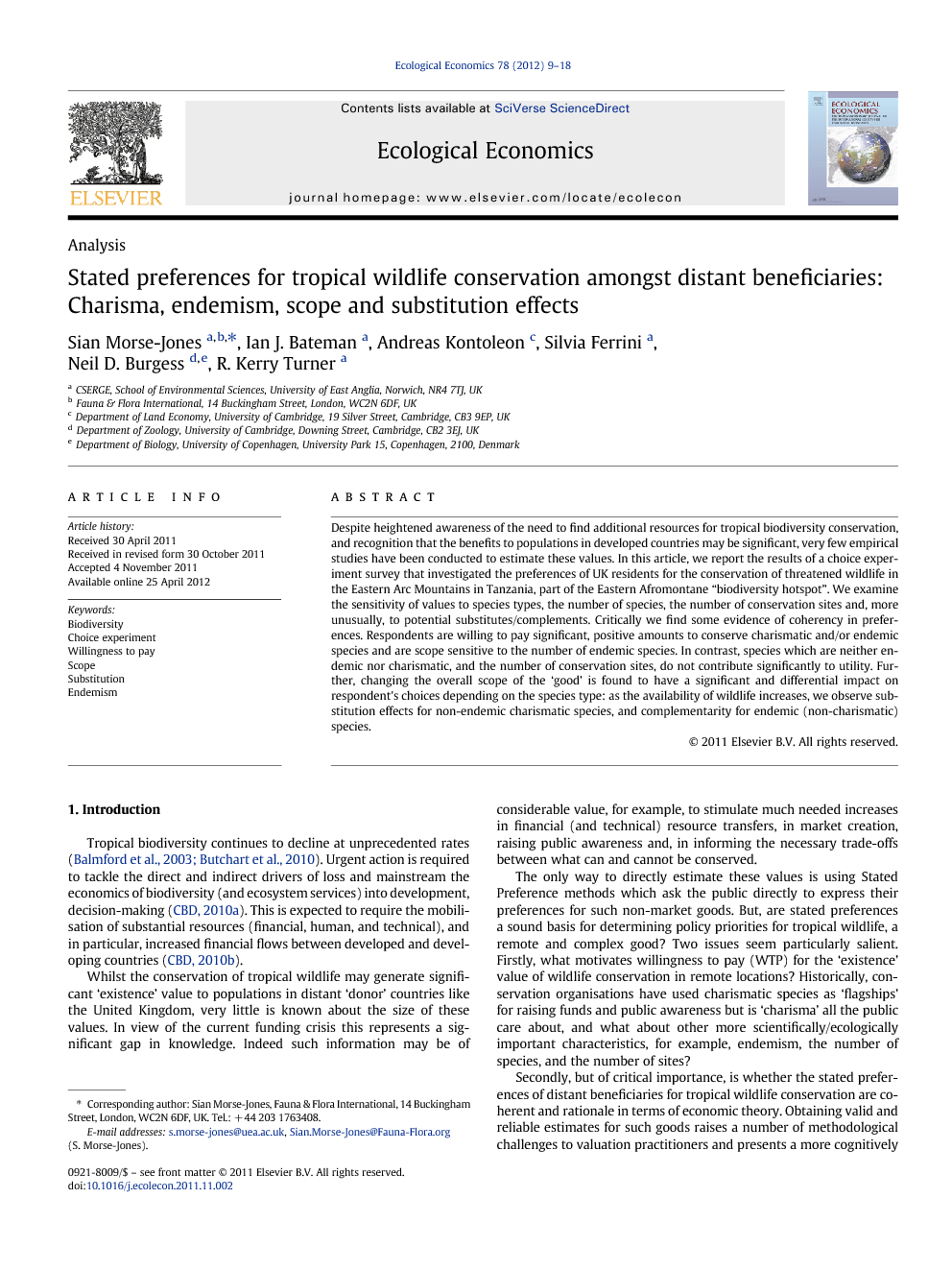 Despite heightened awareness of the need to find additional resources for tropical biodiversity conservation, and recognition that the benefits to populations in developed countries may be significant, very few empirical studies have been conducted to estimate these values. In this article, we report the results of a choice experiment survey that investigated the preferences of UK residents for the conservation of threatened wildlife in the Eastern Arc Mountains in Tanzania, part of the Eastern Afromontane “biodiversity hotspot”. We examine the sensitivity of values to species types, the number of species, the number of conservation sites and, more unusually, to potential substitutes/complements. Critically we find some evidence of coherency in preferences. Respondents are willing to pay significant, positive amounts to conserve charismatic and/or endemic species and are scope sensitive to the number of endemic species. In contrast, species which are neither endemic nor charismatic, and the number of conservation sites, do not contribute significantly to utility. Further, changing the overall scope of the ‘good’ is found to have a significant and differential impact on respondent's choices depending on the species type: as the availability of wildlife increases, we observe substitution effects for non-endemic charismatic species, and complementarity for endemic (non-charismatic) species.

Tropical biodiversity continues to decline at unprecedented rates (Balmford et al., 2003 and Butchart et al., 2010). Urgent action is required to tackle the direct and indirect drivers of loss and mainstream the economics of biodiversity (and ecosystem services) into development, decision-making (CBD, 2010a). This is expected to require the mobilisation of substantial resources (financial, human, and technical), and in particular, increased financial flows between developed and developing countries (CBD, 2010b). Whilst the conservation of tropical wildlife may generate significant ‘existence’ value to populations in distant ‘donor’ countries like the United Kingdom, very little is known about the size of these values. In view of the current funding crisis this represents a significant gap in knowledge. Indeed such information may be of considerable value, for example, to stimulate much needed increases in financial (and technical) resource transfers, in market creation, raising public awareness and, in informing the necessary trade-offs between what can and cannot be conserved. The only way to directly estimate these values is using Stated Preference methods which ask the public directly to express their preferences for such non-market goods. But, are stated preferences a sound basis for determining policy priorities for tropical wildlife, a remote and complex good? Two issues seem particularly salient. Firstly, what motivates willingness to pay (WTP) for the ‘existence’ value of wildlife conservation in remote locations? Historically, conservation organisations have used charismatic species as ‘flagships’ for raising funds and public awareness but is ‘charisma’ all the public care about, and what about other more scientifically/ecologically important characteristics, for example, endemism, the number of species, and the number of sites? Secondly, but of critical importance, is whether the stated preferences of distant beneficiaries for tropical wildlife conservation are coherent and rationale in terms of economic theory. Obtaining valid and reliable estimates for such goods raises a number of methodological challenges to valuation practitioners and presents a more cognitively demanding task to respondents than is encountered under the elicitation of values for local, familiar and/or less complex goods. An initial concern is whether, when faced with previously unknown and complex goods, respondents are able to ‘discover’ theoretically consistent preferences (as per Plott, 1996) or instead use available heuristics to ‘construct’ responses which are susceptible to framing effects and thereby fail tests of procedural invariance (as per Slovic, 1995). In seeking to distinguish between the former theoretically consistent preferences and those that are inadmissible within wider cost benefit analyses (CBA) a commonly employed consistency test is to examine the scope sensitivity of valuations (Arrow et al., 1993). Whilst we examine scope sensitivity, we argue that it is flawed and insufficient in that a finding of mere statistically significant differences in willingness-to-pay as scope changes does not imply that the degree of sensitivity is reasonable and sufficient. To address this failing we extend our survey design to allow tests for substitution (and/or complementarity) effects. Economic theory provides the clear expectation that WTP should decline as the availability of a substitute increases (and the converse in the presence of complements). Despite the fundamental nature of such a relation, substitution is rarely considered within stated preference (SP) methods and in particular in choice experiment analyses. Correspondingly, in this paper we undertake an in-depth investigation of what drives WTP for non-use values of wildlife conservation in distant locations, and we assess the theoretical consistency of preferences by examining value sensitivity to: the number and type of species, the number of conservation sites, and the presence of potential substitutes (/complements). We approach the above issues using a split-sample choice experiment (CE) survey which elicits WTP for (i) conserving wildlife in the Eastern Arc Mountains of Tanzania, and (ii) a larger good, that includes conserving wildlife in the Eastern Arc and in the Cameroon Highlands. The above effects are investigated with respect to preferences for conserving endemic versus non-endemic species, and charismatic versus non-charismatic species.

In this paper we report the results of an in-depth investigation of the preferences of UK residents for conserving tropical wildlife. Whilst some argue that the general public cannot be expected to judge accurately complex and unfamiliar goods such as tropical biodiversity and come up with sensible decisions (Sagoff, 1988), we find evidence here to suggest that responses are not arbitrary and broadly conform with economic theory. Marginal WTP is sensitive to the number of species (quantitative scope) and to certain species types (qualitative scope changes), and to changes in the available wildlife. Interestingly, we find that the latter has a differential impact depending on the species type, and, crucially, that the differences seem logical: endemics are subject to complementarity and non-endemic charismatics to substitution effects. In terms of what people are really valuing, we find that preferences are mainly driven by charisma (big, furry and familiar species); and endemism; and the number of species conserved. In contrast, species which are neither endemic nor charismatic, and the number of conservation sites do not significantly contribute to utility. In relation to the earlier question of whether stated preferences for remote wildlife are a sound basis for policy-making, of concern is that public prioritisation of ‘charismatic’ wildlife (as evidenced here) could result in policies that conserve ‘furry’ animals at the expense of other less charismatic and non-endemic yet ecologically/biologically important species (see also Martin-Lopez et al., 2008). There is already evidence to suggest that a disproportionate amount of conservation funding goes to relatively few species (Dawson and Shogren, 2001, Metrick and Weitzman, 1996 and Richardson and Loomis, 2009), thus relying on public preferences could compound the problem that species which are poorly known and uncharismatic may be ignored by conservation action (Sitas et al., 2009). Of course, in some instances, little known and widespread animals might be vital for the conservation of bigger charismatic animals and their value can be considered embedded in a Lion's or gorilla's WTP in which case such values may be a good proxy for a wildlife project. The lack of a premium for conserving multiple sites may also raise concerns and highlights the importance of incorporating ecosystem service values to ensure that site conservation issues are not overlooked. Moreover, future research into public preferences for wildlife conservation should examine sensitivity in situations where the sites are more dissimilar since it seems plausible that in the context of more diverse ecosystems habitats or biomes that preferences could be sensitive to the conservation of multiple sites — this is an area for future research. Given these outcomes, we concur with Hanley et al. (2003) that the use of such estimates in cost–benefit type appraisals should be conducted in conjunction with expert opinion, so that policy can be designed to secure maximum benefits for society, and, crucially for nature. While we feel that this experiment provides important evidence regarding the coherence of preferences, this does not necessarily mean that those preferences align with ecological requirements for sustainability. Any policy seeking to provide sustainable solutions would have to ensure that the implementation of preference based decisions are constrained within the bounds of the latter requirements (Common and Perrings, 1992).