عنوان انگلیسی
Like a phoenix from the ashes. A Weberian analysis of the charismatic CEO routinization
دانلود فوری مقاله + سفارش ترجمه 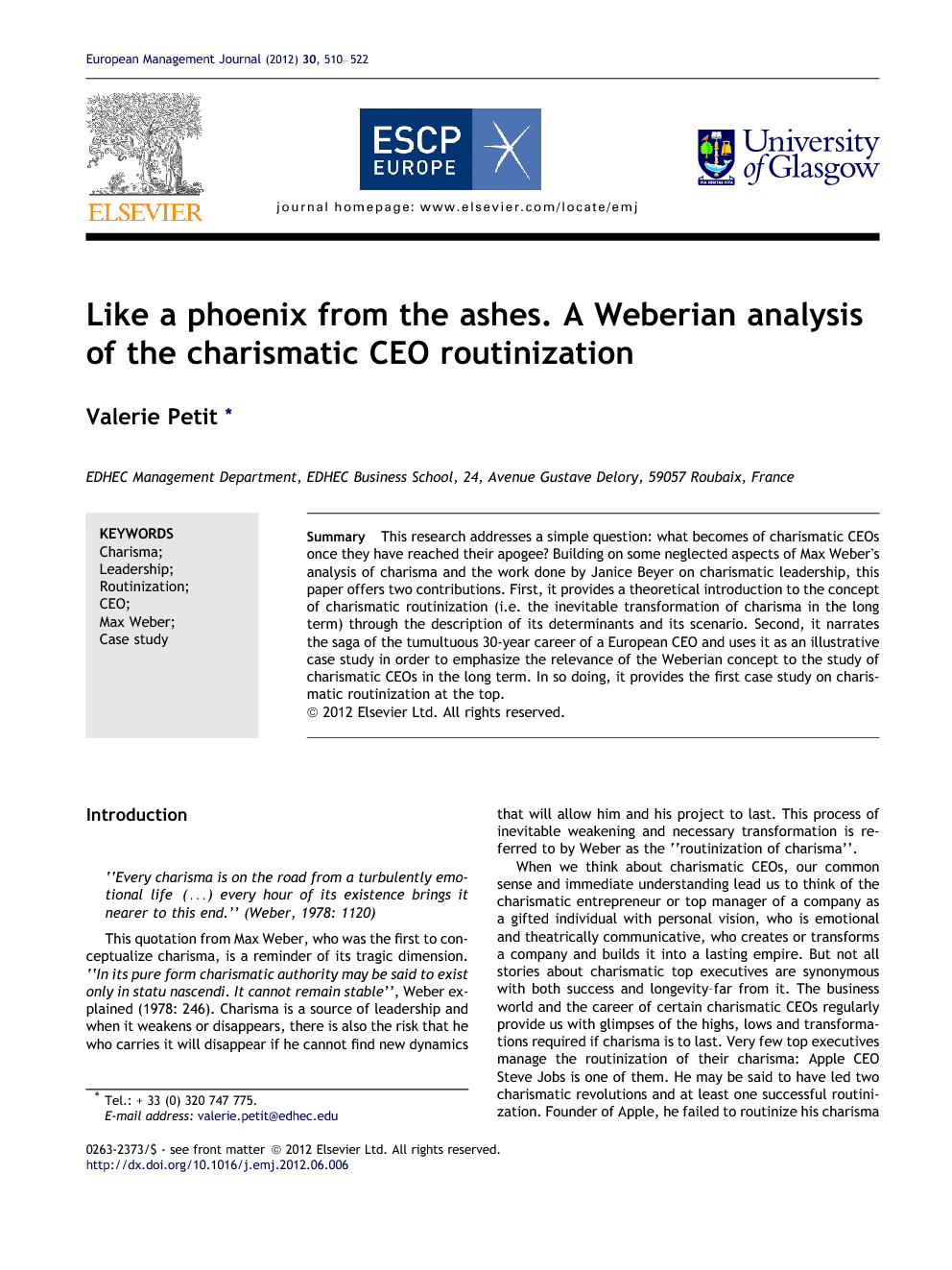 This research addresses a simple question: what becomes of charismatic CEOs once they have reached their apogee? Building on some neglected aspects of Max Weber’s analysis of charisma and the work done by Janice Beyer on charismatic leadership, this paper offers two contributions. First, it provides a theoretical introduction to the concept of charismatic routinization (i.e. the inevitable transformation of charisma in the long term) through the description of its determinants and its scenario. Second, it narrates the saga of the tumultuous 30-year career of a European CEO and uses it as an illustrative case study in order to emphasize the relevance of the Weberian concept to the study of charismatic CEOs in the long term. In so doing, it provides the first case study on charismatic routinization at the top.

Weber’s analysis of the routinization of charisma provides an explanation of a scenario that seemed to challenge the new charismatic leadership theories. The story of William French is one of the charismatic leader who repeatedly failed to routinize his charisma. It is a story that in a way complements that of Robert Noyce, who, on the contrary, Browning and Beyer tell us was able to ensure the changes he introduced lasted through the rationalization and traditionalization of his charisma. The reason that most of French’s routinizations were interrupted is that conflicting relationships always seemed to develop between the charismatic leader and the defenders of tradition. In his analysis of charisma, Weber placed such antagonism at the heart of the dynamic of charisma and its historical function, i.e. revolution. This dimension has been completely neglected in recent studies, including those carried out by Beyer, the only one who has paid any attention to the question of routinized charisma. The case of William French highlights both the importance of the routinization process and its current relevance in a context of corporate governance where leadership is provided by a succession of different leaders and competing legitimacies sometimes clash with great acrimony. By providing an illustration of the relevance of Weber’s analysis of the routinization of charisma, I hope to encourage future research in the following two areas. First, qualitative research on charisma among corporate leaders acting in the highly specific context of corporate governance, which forces us to reconsider the traditional frameworks of leadership theories. Such research would also complement recent studies carried out in the field of strategic management and which explored the behavioral dimensions of strategy (Powell, Lovallo, & Fox, in press) and the impact of CEO leadership on performance (Wang, Tsui, & Xin, 2011). Second, a revision of Weber’s work, the relevance of which I hope to have demonstrated herein. This relevance fundamentally relates to the Weberian method, a multi-disciplinary method that combines historical, sociological and psychological approaches to perform complex analysis. This is a comparative and comprehensive method based on the construction of ideal-types and their comparison with real scenarios; it provides both inspiration and considerable efficacy to researchers working on case studies.