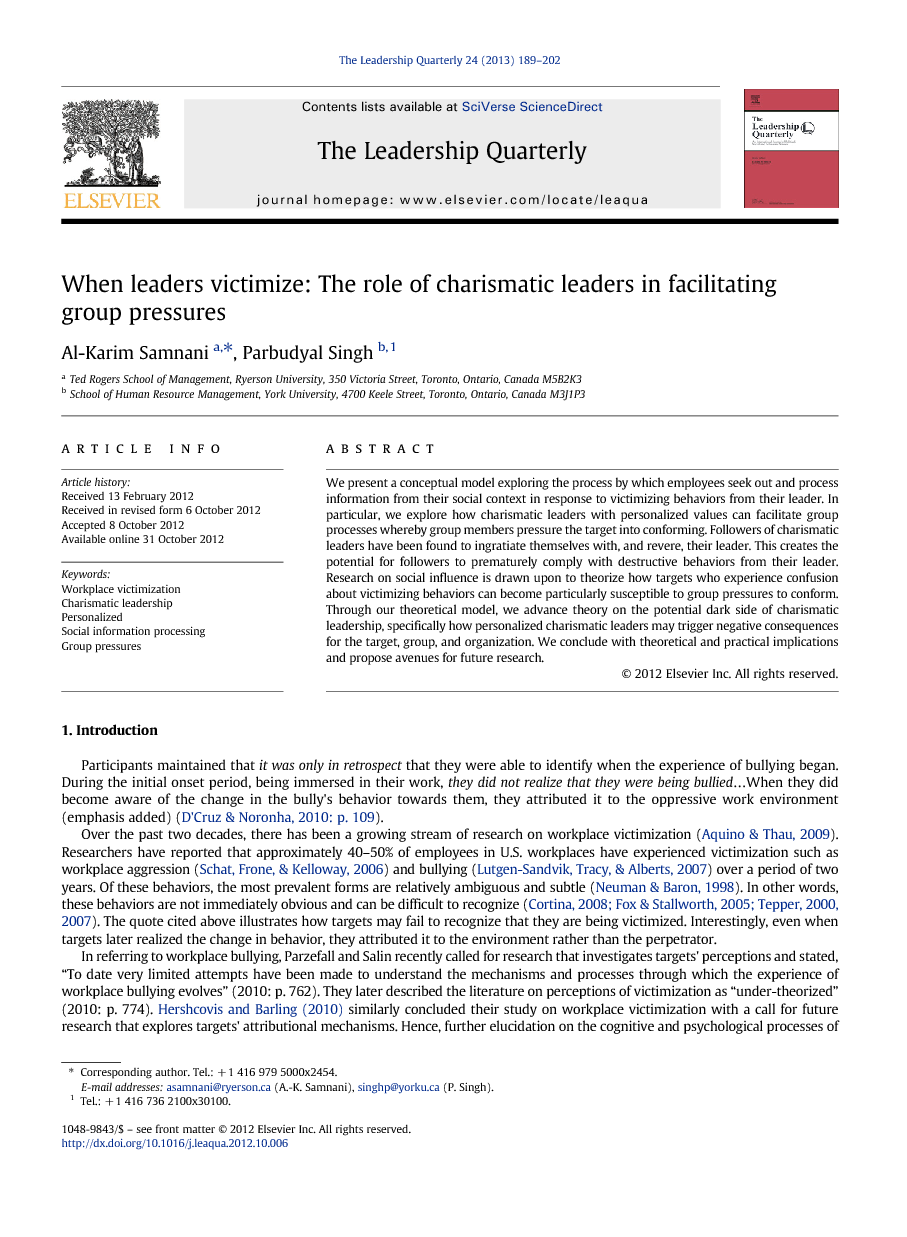 We present a conceptual model exploring the process by which employees seek out and process information from their social context in response to victimizing behaviors from their leader. In particular, we explore how charismatic leaders with personalized values can facilitate group processes whereby group members pressure the target into conforming. Followers of charismatic leaders have been found to ingratiate themselves with, and revere, their leader. This creates the potential for followers to prematurely comply with destructive behaviors from their leader. Research on social influence is drawn upon to theorize how targets who experience confusion about victimizing behaviors can become particularly susceptible to group pressures to conform. Through our theoretical model, we advance theory on the potential dark side of charismatic leadership, specifically how personalized charismatic leaders may trigger negative consequences for the target, group, and organization. We conclude with theoretical and practical implications and propose avenues for future research.

Participants maintained that it was only in retrospect that they were able to identify when the experience of bullying began. During the initial onset period, being immersed in their work, they did not realize that they were being bullied…When they did become aware of the change in the bully's behavior towards them, they attributed it to the oppressive work environment (emphasis added) (D'Cruz & Noronha, 2010: p. 109). Over the past two decades, there has been a growing stream of research on workplace victimization (Aquino & Thau, 2009). Researchers have reported that approximately 40–50% of employees in U.S. workplaces have experienced victimization such as workplace aggression (Schat, Frone, & Kelloway, 2006) and bullying (Lutgen-Sandvik, Tracy, & Alberts, 2007) over a period of two years. Of these behaviors, the most prevalent forms are relatively ambiguous and subtle (Neuman & Baron, 1998). In other words, these behaviors are not immediately obvious and can be difficult to recognize (Cortina, 2008, Fox and Stallworth, 2005, Tepper, 2000 and Tepper, 2007). The quote cited above illustrates how targets may fail to recognize that they are being victimized. Interestingly, even when targets later realized the change in behavior, they attributed it to the environment rather than the perpetrator. In referring to workplace bullying, Parzefall and Salin recently called for research that investigates targets' perceptions and stated, “To date very limited attempts have been made to understand the mechanisms and processes through which the experience of workplace bullying evolves” (2010: p. 762). They later described the literature on perceptions of victimization as “under-theorized” (2010: p. 774). Hershcovis and Barling (2010) similarly concluded their study on workplace victimization with a call for future research that explores targets' attributional mechanisms. Hence, further elucidation on the cognitive and psychological processes of targets can provide a richer and more comprehensive understanding of the ways in which targets perceive and mentally encode victimizing behaviors. We integrate research on social information processing (Salancik & Pfeffer, 1978) and social influence (Kelman, 1958) to examine how the social context shapes the way in which targets construe victimizing behaviors. Charismatic leaders can play an important role in this process because of their ability to induce approval from followers and facilitate collective behaviors among group members (Conger, 1990 and Howell and Shamir, 2005). Moreover, charismatic leaders with personalized values, which suggest a desire to accumulate personal power, may engage in victimizing behaviors given their potential to exploit and manipulate followers (Conger, 1990 and Kets de Vries, 1993). Group members of the target, who may revere their leader, may signal social cues that shape targets' interpretation. Demonstrating the central role of social cues in information processing, early empirical research supported Salancik and Pfeffer's (1978) position that social cues (e.g., interaction with group members) are more influential on perceptions and subsequent reactions than the actual objective characteristic (e.g., task design and behavior) that one is exposed to (e.g., Blau and Katerberg, 1982, O'Reilly and Caldwell, 1979 and White and Mitchell, 1979). Social information processing theory, therefore, suggests that charismatic leaders and group members may have a stronger influence in shaping targets' perceptions and reactions through social cues than the actual victimizing behavior. The contributions of this study are threefold. First, we advance understanding of the potential influence that charismatic leaders can have on targets' and group members' perceptions about victimizing behaviors from their leader. While research on charismatic leaders has largely focused on dyadic processes, we theorize the under-researched influence that these leaders may have on group processes (Waldman & Javidan, 2009). Moreover, we also extend research on workplace victimization by carving out the key role of group processes and pressures in facilitating social cues that can induce conformity from targets. The processes theorized also shed light on the role that leadership can play in explaining why targets may not realize that they are being victimized, as evident in the opening quote (e.g., D'Cruz & Noronha, 2010). Second, we extend social psychology and cognitive-based research in the workplace victimization literature including attribution (e.g., Douglas et al., 2008, Hershcovis and Barling, 2010 and Martinko et al., 2011) and information processing (e.g., Felps et al., 2006, Glomb and Liao, 2003 and Robinson and O'Leary-Kelly, 1998) by elucidating how charismatic leaders may influence attribution and information processing mechanisms. We further build on this research by exploring how information processing is shaped by social cues. Interpretations of victimizing behaviors are important because perpetrators often observe targets' reactions to their behaviors (Leck and Galperin, 2006 and Lutgen-Sandvik, 2006). When targets do not initially react in opposition, perpetrators tend to perceive this as a signal of the target's acceptance of the behaviors (Einarsen, Hoel, Zapf, & Cooper, 2011). Later reactions will then typically be viewed as an over-reaction, which shifts the blame for a reaction onto the target (D'Cruz & Noronha, 2011). This can have long-term consequences for targets and leave them vulnerable to the perpetrator. Third, we extend the workplace victimization literature through a comprehensive application of social information processing theory by exploring the broad process from early victimizing behaviors, interpretation, leadership, social influence, and outcomes. In this process, we investigate the personalized charismatic leader as a perpetrator of victimizing behaviors. This sheds new light on how the charismatic leader may victimize followers within the work group. In this paper, we first provide an overview of workplace victimization and social information processing theory. We then develop and present a conceptual model that illustrates how charismatic leaders can play a vital role in shaping group pressures toward the target to conform. Finally, we conclude with theoretical and practical implications and propose directions for future research.

In this paper, we theorized that targets will seek signals and cues from their immediate work environment and social context to help clarify experiences of workplace victimization. These signals and cues may come in the form of social influences from group members, who will tend to pressure confused targets to conform when the perpetrator is a personalized charismatic leader. These pressures to conform can have significant consequences for the target. In particular, as the victimizing behaviors intensify and targets later notice the consequences of these behaviors, it will become increasingly difficult for them to react to the perpetrator given their prior conformity. In demonstrating how personalized charismatic leaders can elicit group pressures to conform, this paper illustrates the need for future studies to include the role of, and antecedents to, cognitive processes that influence targets' interpretation and conformity. This can advance our understanding of how targets can more quickly identify victimization when it occurs.