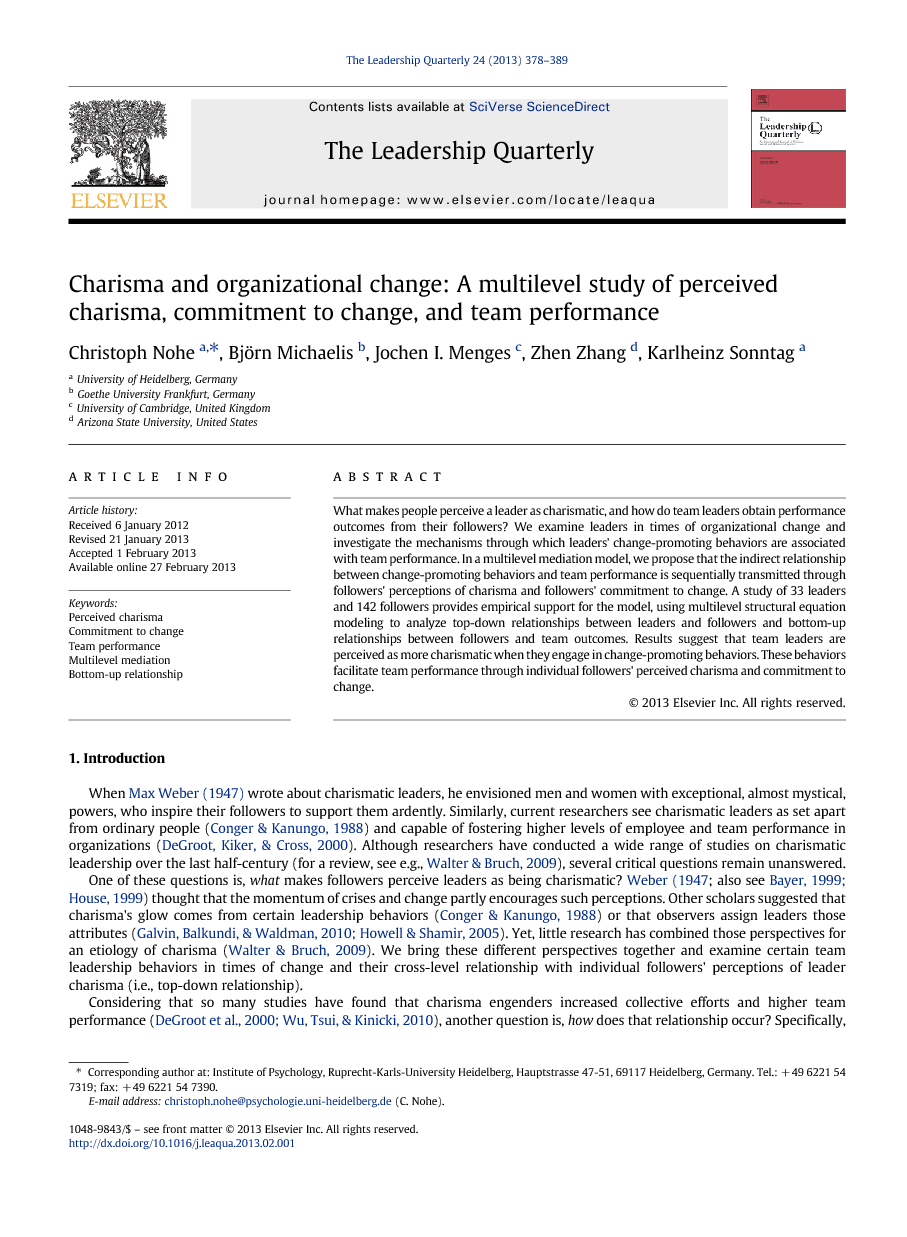 What makes people perceive a leader as charismatic, and how do team leaders obtain performance outcomes from their followers? We examine leaders in times of organizational change and investigate the mechanisms through which leaders' change-promoting behaviors are associated with team performance. In a multilevel mediation model, we propose that the indirect relationship between change-promoting behaviors and team performance is sequentially transmitted through followers' perceptions of charisma and followers' commitment to change. A study of 33 leaders and 142 followers provides empirical support for the model, using multilevel structural equation modeling to analyze top-down relationships between leaders and followers and bottom-up relationships between followers and team outcomes. Results suggest that team leaders are perceived as more charismatic when they engage in change-promoting behaviors. These behaviors facilitate team performance through individual followers' perceived charisma and commitment to change.

When Max Weber (1947) wrote about charismatic leaders, he envisioned men and women with exceptional, almost mystical, powers, who inspire their followers to support them ardently. Similarly, current researchers see charismatic leaders as set apart from ordinary people (Conger & Kanungo, 1988) and capable of fostering higher levels of employee and team performance in organizations (DeGroot, Kiker, & Cross, 2000). Although researchers have conducted a wide range of studies on charismatic leadership over the last half-century (for a review, see e.g., Walter & Bruch, 2009), several critical questions remain unanswered. One of these questions is, what makes followers perceive leaders as being charismatic? Weber (1947; also see Bayer, 1999 and House, 1999) thought that the momentum of crises and change partly encourages such perceptions. Other scholars suggested that charisma's glow comes from certain leadership behaviors (Conger & Kanungo, 1988) or that observers assign leaders those attributes ( Galvin et al., 2010 and Howell and Shamir, 2005). Yet, little research has combined those perspectives for an etiology of charisma (Walter & Bruch, 2009). We bring these different perspectives together and examine certain team leadership behaviors in times of change and their cross-level relationship with individual followers' perceptions of leader charisma (i.e., top-down relationship). Considering that so many studies have found that charisma engenders increased collective efforts and higher team performance (DeGroot et al., 2000 and Wu et al., 2010), another question is, how does that relationship occur? Specifically, we need a more nuanced understanding of how perceived charisma affects followers individually and then propels them to collectively achieve higher levels of team performance. In other words, the individual-level origins of team performance (i.e., bottom-up relationships) are not well understood (cf. Kozlowski & Klein, 2000). In this study, we address those two questions theoretically and empirically in an integrated multilevel model of charisma. The model depicted in Fig. 1 suggests that in times of organizational change individual followers see change-promoting leaders as being more charismatic. Consequently, followers individually commit themselves to the focal change and this, in turn, increases their collective team performance. Commitment to change refers to “a mind-set that binds an individual to a course of action deemed necessary for the successful implementation of a change initiative” (Herscovitch & Meyer, 2002, p. 475). We field-tested this model in a company that was undergoing change. We assessed 33 team leaders and 142 subordinate team members, capturing team leaders' behaviors, team members' perceptions of team leaders' charisma, team members' individual commitment to change, and collective team performance during the change. Notably, our model refers to charisma perceptions. We define charisma, as a construct, as “symbolic leader influence rooted in emotional and ideological foundations” (Antonakis, Fenley, & Liechti, 2011, p. 376). This definition implies that the leader's power is based on emotions and ideology but not on expert influence or reward as stressed in leadership styles of task-focused or transactional leadership ( Antonakis and House, 2002 and Antonakis et al., 2011). Vivid verbal and non-verbal communication tactics (e.g., metaphors, anecdotes, and body gestures) are typically viewed as means that leaders can use to arouse followers' emotions, inspire them, and initiate collective action around a vision ( Antonakis et al., 2011, Den Hartog and Verburg, 1997 and Shamir et al., 1993). Followers validate a leader's charisma through their perceptions of whether the leader acts in ways that make the leader appear to be charismatic or non-charismatic ( Antonakis et al., 2011, Conger, 1999 and Keyes, 2002). Indeed, Conger and Kanungo, 1987 and Conger and Kanungo, 1988 stressed followers' perceptions as the ultimate determinant of leader influence, a position reiterated across the literature on charismatic leadership (e.g., Antonakis et al., 2011, Galvin et al., 2010 and Howell and Shamir, 2005). Therefore, the consequences of charismatic leadership depend on the extent to which followers attribute charisma to the leader ( Antonakis, 2012, Conger and Kanungo, 1987, Conger and Kanungo, 1988, House, 1999, Shamir, 1999 and Yukl, 1999). Accordingly, research shows that perceived charisma relates to desirable outcomes such as cooperation among followers (De Cremer & van Knippenberg, 2002), helping behaviors (Den Hartog, De Hoogh, & Keegan, 2007), leader influence (Yorges, Weiss, & Strickland, 1999), and company stock prices (Tosi, Misangyi, Fanelli, Waldman, & Yammarino, 2004). Therefore, in this study, we focus on followers' charisma perceptions, rather than charismatic leadership behavior. Our study contributes to the leadership literature in three particular ways. First, we provide an etiology of perceived charisma, identifying leadership behaviors that, in times of change, are associated with followers' perceptions of leaders' charisma. Second, we show that certain team leader behaviors engender collective team benefits through an individual-level mechanism comprising individual followers' perceptions of charisma and commitment to change. Our study is among the first to model and test the multilevel mechanisms of charisma in teams as depicted in Fig. 1, specifically looking at the top-down relationship between leaders and individual followers and the bottom-up relationship between individual followers and their teams. Bottom-up processes refer to organizational phenomena that have theoretical origins at lower levels and emergent properties at higher levels (Kozlowski & Klein, 2000). Third, our multilevel model contributes to “the dynamic interplay between the individuals within a team and the team as a whole” (Chen, Kirkman, Kanfer, Allen, & Rosen, 2007, p. 331). Our model is among the first to address both top-down and bottom-up relationships and thus to bridge micro and macro domains — arguably one of the biggest future challenges in management research (Aguinis et al., 2011 and Mathieu and Chen, 2011).

Leaders play an important role in successfully managing organizational change. At the same time, organizational change gives leaders an opportunity to demonstrate behaviors that followers may perceive as charisma. Our study shows that in times of change, change-promoting leadership behaviors are positively related to followers' perceptions of leader charisma which, in turn, can have performance consequences. We now return to the two questions we posed earlier. What makes followers perceive that leaders are charismatic? How does perceived charisma boost team performance? First, followers perceive leaders as charismatic when the leaders engage in change-promoting behaviors. Second, followers' perceptions of charisma are related to team performance through followers' commitment to change. Hence our study contributes an etiology of perceived charisma in times of planned organizational change and an understanding of how top-down and bottom-up relationships combine to shape team outcomes. We hope this new knowledge will help future leadership scholars better address the inherent complexities of the enchanting powers of those leaders that Max Weber called charismatic.