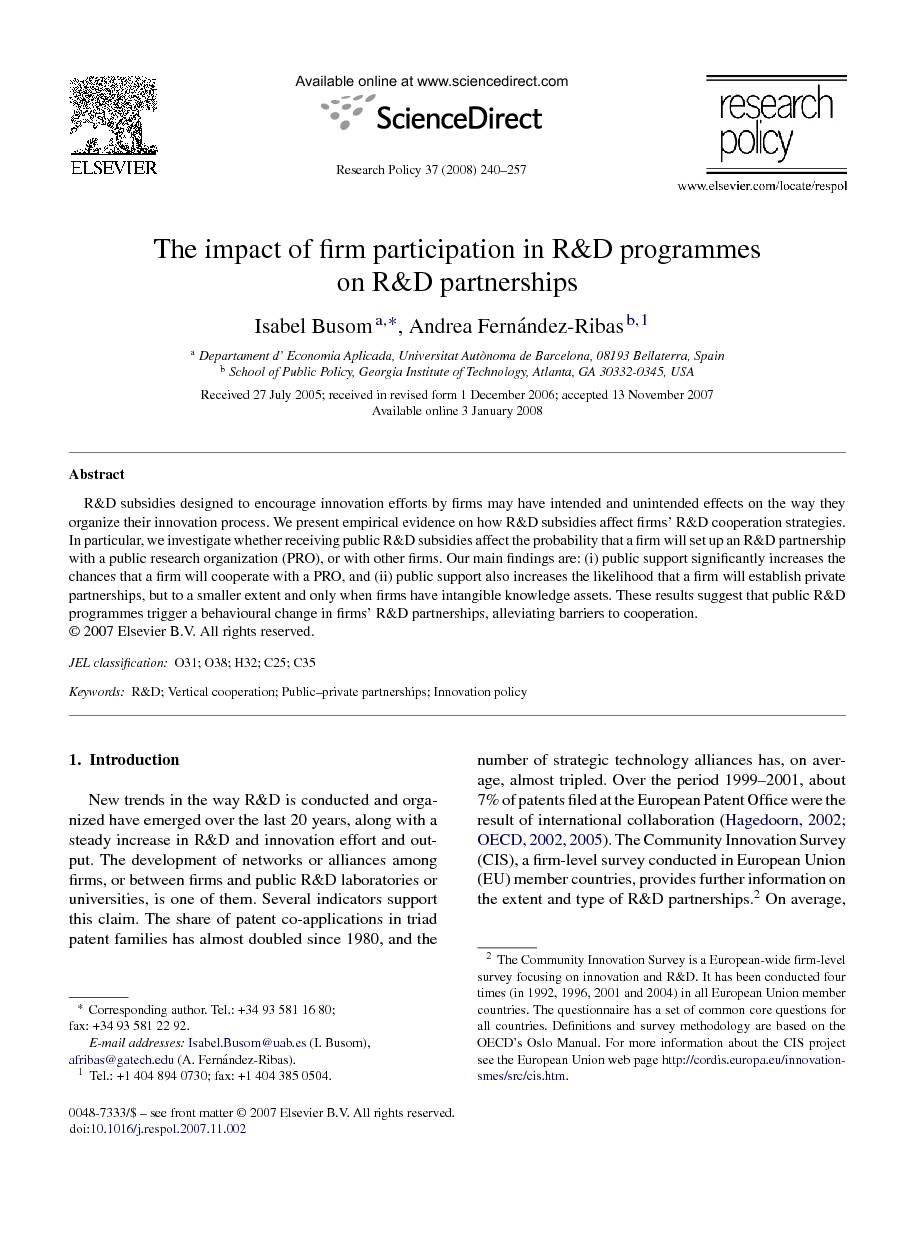 R&D subsidies designed to encourage innovation efforts by firms may have intended and unintended effects on the way they organize their innovation process. We present empirical evidence on how R&D subsidies affect firms’ R&D cooperation strategies. In particular, we investigate whether receiving public R&D subsidies affect the probability that a firm will set up an R&D partnership with a public research organization (PRO), or with other firms. Our main findings are: (i) public support significantly increases the chances that a firm will cooperate with a PRO, and (ii) public support also increases the likelihood that a firm will establish private partnerships, but to a smaller extent and only when firms have intangible knowledge assets. These results suggest that public R&D programmes trigger a behavioural change in firms’ R&D partnerships, alleviating barriers to cooperation.

New trends in the way R&D is conducted and organized have emerged over the last 20 years, along with a steady increase in R&D and innovation effort and output. The development of networks or alliances among firms, or between firms and public R&D laboratories or universities, is one of them. Several indicators support this claim. The share of patent co-applications in triad patent families has almost doubled since 1980, and the number of strategic technology alliances has, on average, almost tripled. Over the period 1999–2001, about 7% of patents filed at the European Patent Office were the result of international collaboration (Hagedoorn, 2002, OECD, 2002 and OECD, 2005). The Community Innovation Survey (CIS), a firm-level survey conducted in European Union (EU) member countries, provides further information on the extent and type of R&D partnerships.2 On average, 17% of industrial firms with innovative activities in the EU had R&D cooperation agreements with other firms or organizations in 1998–2000; in 2002–2004, 25% of all innovative firms had innovation partnerships.3 Customers or suppliers were the most frequent partners, followed by firms within the same enterprise group and by universities or other higher education institutions. Cross-country differences are noticeable, however. In Finland 22% of manufacturing SMEs declared being involved in cooperative agreements related to innovation or R&D projects, while in Spain or Italy barely 3% did. These differences can be partly attributed to a lower overall rate of innovative firms in Southern European countries, but even within the subset of innovative firms differences are quite significant, as shown in Fig. 1. At the same time, public support programmes to encourage private R&D effort and the development of research partnerships between private firms and PROs have been implemented in the US, Japan and the European Union. Some examples are the Advanced Technology Program in the US and the EU's successive European Framework Programmes. These facts raise several questions: is there indeed too little collaboration for research and innovation in the private sector, involving firms or firms and PROs? If so, what are the barriers to collaboration? Do existing public support programmes have an effect on R&D and innovation partnerships? In this paper we focus on the last question. We extend existing work by explicitly modelling the participation of firms in R&D programmes, and estimate the effect that participation has on different type of partnerships. We also take into account that some R&D programmes require collaboration as an eligibility condition, while others do not.4 While there is an extensive body of empirical research on the determinants of research partnerships, there is limited evidence on the ability of public support to have an effect on them. Most evaluation research based on econometric methods has focused on the impact that public support has on private R&D expenditure, on patenting or on other measures of innovation performance, but not on effects on firm behaviour regarding how these activities are organized. Our contribution to the literature is that we explicitly investigate whether public support for private research and innovation activities changes firms’ R&D cooperation strategies and increases the likelihood to cooperate with particular types of partners; that is, whether there is behavioural additionality. In the evaluation literature additionality refers to the extent that a programme contributes to creating additional welfare or efficiency gains that would not have been obtained otherwise.5 Obtaining estimates of the long-term effects of a programme on welfare or on aggregate productivity may be difficult, but intermediate indicators can be used. These are input, output and behavioural additionality tests or measures. Input additionality refers to the change in private R&D expenditure triggered by public support, although increases in other innovation inputs could be used. Output additionality is usually measured as the change in patents and new products obtained by supported firms. Behavioural additionality refers to changes in the type of R&D projects, R&D management capabilities or collaboration strategies that firms may experience as a result of receiving public support.6 There are some advantages in analysing behavioural relative to input or output additionality. Inferences based on input additionality can be misleading in some cases. For example, when an R&D project involves strong economies of scale or scope and it is carried out in collaboration, it is very likely that each member's private R&D expenditure is smaller than the expenditure required on a stand-alone basis. When the aim is to measure output additionality, data for several periods might be needed, since R&D projects can take some time to produce results (on patents obtained, innovations introduced, changes in productivity), and these may take place over a number of years. Unless the data used cover several periods, including observations before, during and after receiving support, the overall impact of public funding might be underestimated. Hence behavioural additionality can provide a complementary measure of short-run policy impact with relatively limited data. In this paper we analyse in particular a sample of about 700 manufacturing firms in Spain and test whether public support triggers a significant change in the probability that a firm will establish an R&D partnership with customers or suppliers, or with a PRO. We use two methodological approaches in order to take into account the endogeneity of programme participation. We find that (i) participation in national R&D programmes has a strong effect on public–private partnerships, suggesting that these are affected by market failures, and public programmes help overcome them to some extent; (ii) public support has also a positive, possibly unintended, effect on the likelihood that a firm establishes private partnerships, but this effect is larger when firms have intangible knowledge assets in the form of patents; (iii) cooperation with customers or suppliers (private partnerships), and cooperation with PROs (public–private partnerships) are associated with firms with different characteristics, as found in similar studies for other countries. The paper is organized as follows. Section 2 provides a short review of the main hypotheses explaining R&D partnerships and of closely related empirical work. Section 3 describes the data and the main features of Spanish R&D programmes. Section 4 formulates the empirical framework and lays out the hypotheses that will be tested. Section 5 gives the results, and we conclude in Section 6.

In this paper we have estimated the effects that public programmes providing funding for firms’ R&D projects have on the probability that firms cooperate with public research organizations on one hand, and with customers or suppliers on the other. We extend previous work on innovation policy evaluation by focusing explicitly on testing whether public support affects the chances that a firm will set up a partnership, that is, whether it produces behavioural additionality, in contrast to input or output additionality. We take into account the source of public support: we distinguish between national-level programmes and EU-level programmes, because they have different requirements regarding cooperation. Finally, we account for potential endogeneity of participation in cooperation equations both through a structural and through a quasi-experimental approach. Our main findings, obtained with a sample of Spanish R&D performing manufacturing, can be summarized as follows. First, participation in national R&D programmes changes firms’ behaviour in the direction intended by policy-makers regarding industry-science links. The probability that a firm will cooperate with a PRO increases by 28 percentage points when it receives public support. Second, we find that partnerships with customers or suppliers also increase as a result of participating in national programmes, although to a lesser extent and basically when firms have intangible knowledge assets, embodied in international patents. Overall, these results provide evidence that public support encourages both types of partnerships, inducing behavioural additionality. We also find that the choice of cooperation partner is related to firm characteristics and that the impact of these characteristics differs across partner type. This result is globally in line with those of similar studies that analyse the motivation for partnerships. Our results differ from others, however, in that in our study cooperation with customers or suppliers is more likely among firms that sell mostly in the domestic market, are foreign subsidiaries, and have applied for international patents. In addition, we find that firm size does not play a significant role in customer or supplier partnerships, while in Belderbos et al. (2004) firm size had a significant effect on all types of partnerships, and being a foreign subsidiary had no effect. We interpret these differences as suggesting that these partnerships are, on average, used as a mechanism for technology transfer in Spain, where there is high proportion of firms whose R&D activities are oriented towards technology adoption rather than to generation. The likelihood that firms cooperate with universities or public laboratories increases substantially when firms have in-house research capacity, apply for international patents, and belong to the chemical and pharmaceutical industry. Firm size has a positive but small net effect on public–private partnerships. Our results are in this case in line with similar studies for advanced countries. The fact that one of the most important variables to affect the likelihood of cooperation with a PRO is the weight of researchers in firms suggests that the effectiveness of public support for firms’ R&D activities could be enhanced if complemented with policies that encourage hiring highly qualified labour at the firm level, thereby increasing its human capital and its absorptive capacity. These results have some policy implications, but we should be aware of the limitations of the data used. Our estimates are based on essentially a cross-section of firms, limiting our ability to check the robustness of results under alternative procedures to address endogeneity and firm heterogeneity. Second, an important proportion of variation in cooperation and in programme participation remains unexplained. These considerations have implications for data collection for the purpose of R&D policy evaluation. In particular, our work suggests that some enhancements to the Community Innovation Survey would be desirable. One is to design it as a true longitudinal survey. A second enhancement would be the addition of key questions related to managers’ skills and to human capital, to characteristics of R&D projects and of R&D partnerships. Finally, even if public funding increases the development of partnerships, output additionality generated by these partnerships has to be verified before concluding that public subsidies are the most efficient tool to reach the goal of increasing innovation. Other tools might prove to be more effective, or at least, complementary to subsidies. Revising researcher reward systems, improving absorptive capacity of SMEs, increased competition, establishing efficient technology transfer offices and proper management of intellectual property rights at PROs, are some complementary policies as recently highlighted in the literature.