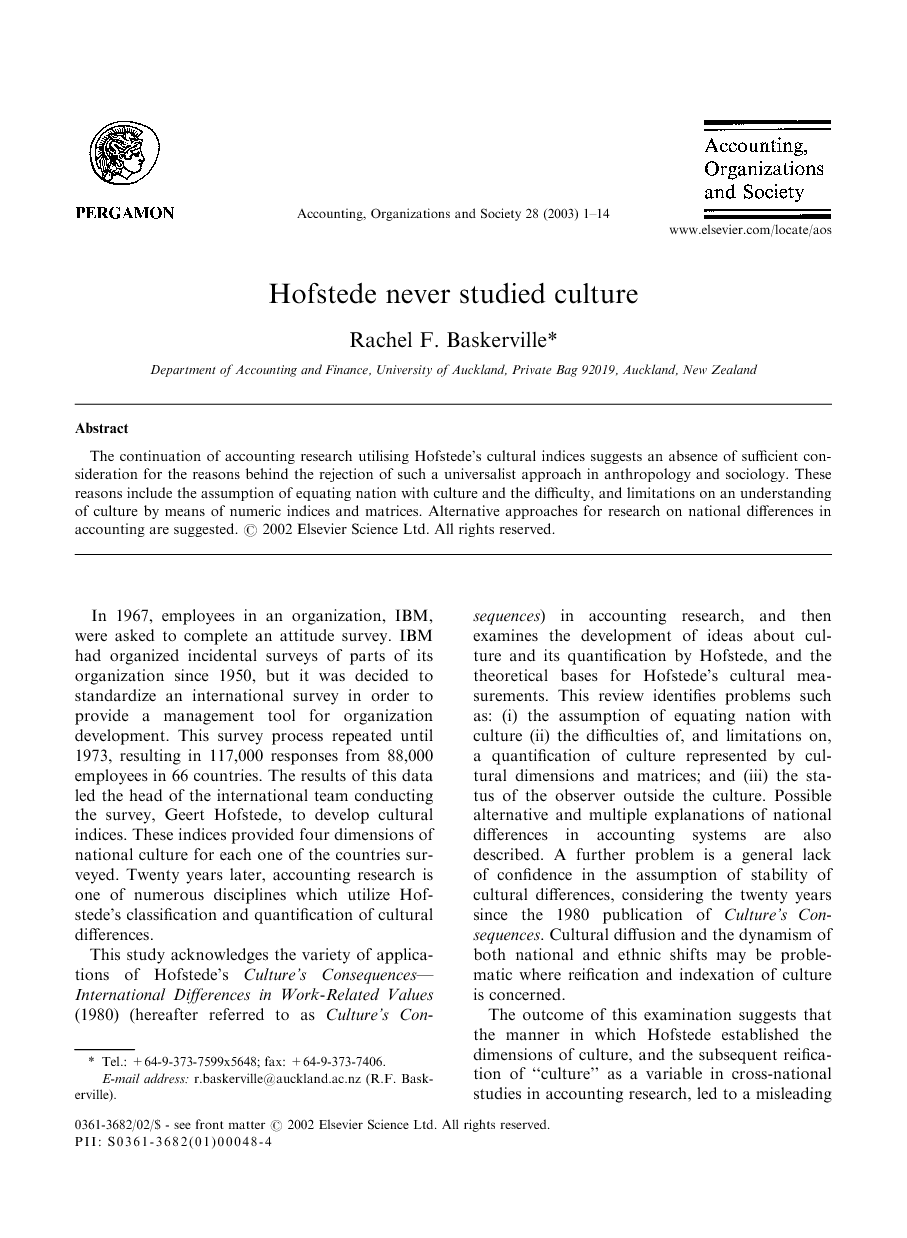 The continuation of accounting research utilising Hofstede's cultural indices suggests an absence of sufficient consideration for the reasons behind the rejection of such a universalist approach in anthropology and sociology. These reasons include the assumption of equating nation with culture and the difficulty, and limitations on an understanding of culture by means of numeric indices and matrices. Alternative approaches for research on national differences in accounting are suggested.

Hofstede never studied culture Rachel F. Baskerville* Department of Accounting and Finance, University of Auckland, Private Bag 92019, Auckland, NewZealand Abstract The continuation of accounting research utilising Hofstede’s cultural indices suggests an absence of sufficient con- sideration for the reasons behind the rejection of such a universalist approach in anthropology and sociology. These reasons includethe assumption of equatingnation with culture andthe difficulty, andlimitations onan understanding of culture by means of numeric indices and matrices. Alternative approaches for research on national differences in accounting are suggested. #2002 Elsevier Science Ltd. All rights reserved.In 1967, employees in an organization, IBM,were asked to complete an attitude survey. IBM had organized incidental surveys of parts of its organization since 1950, but it was decided to standardize an international survey in order to provide a management tool for organization development. This survey process repeated until 1973, resulting in 117,000 responses from88,000 employees in 66 countries. The results of this dataled the head of the international teamconducting the survey, Geert Hofstede, to develop culturalindices.Theseindicesprovided four dimensions of national culture for each one of the countries sur-veyed. Twenty years later, accounting research is one of numerous disciplines which utilize Hof- stede’s classification and quantification of cultural differences.study acknowledges the variety of applica-tions of Hofstede’s Culture’s Consequences—International Differences in Work-Related Values(1980) (hereafter referred to as Culture’s Con-sequences) in accounting research, and then examines the development of ideas about cul-ture and its quantification by Hofstede, and the theoretical bases for Hofstede’s cultural measurements.

The objective of this report was to examine the utilization of and theoretical foundations for the cultural indices proposed from research on corporate values by Geert Hofstede. Hofstede continued for many years making a very significant contribution to studies of organizational cultures, and his scholarship remains within the mainstream theory in international business research and management studies. The theoretical foundation for his subsequent publication Culture and Organizations—Software of the Mind (Hofstede, 1991) was not derived from a universalist concept of culture, but instead he only briefly sourced the justification for the dimensions of culture to writings of a sociologist, Inkeles, and a psychologist, Daniel Levinson. He had distanced the reification of culture from anthropology as a foundation for his work, apart from a brief reference to Ruth Benedict and Margaret Mead; Ruth Benedict was not mentioned in Culture's Consequences. Thus, by 1991, Hofstede had found an anthropological foundation for his theory unnecessary; noting “mainstream anthropology in recent decades has contained itself to marginal groups and to problems which for society as a whole are fairly trivial. It has avoided touching areas where it could be relevant to other disciplines and to practitioners” (Hofstede, 1991, p. 248). This shift to a psychological approach based on Inkeles’ studies meant that he was developing studies of national character, rather than national culture. Hofstede termed these variables “national value differences” (Hofstede, 1998c, p. 480), considering that national culture was more or less synonymous with national character.1 Hofstede retained a preference for the word ‘culture’ as it “allows more emphasis on the environment in which people function” (Hofstede, 1998a, p. 17). Such use of the word was now far-removed from its invocation and layered meanings in anthropology and sociology. Looking back at the evolution of anthropological theory at the same time as Hofstede was developing his dimensions of culture, it can be observed that all of the characteristics the historian Stocking described for Murdock's anthropology: superorganic in culture, behaviourist in psychology, evolutionist in diachronic assumptions, and positivistically comparativist in method (Stocking, 1986, p. 173), can be applied also to Hofstede's approach. Sahlins typified the reaction from mainstream anthropology to such a universalist approach in his essays in Culture and Practical Reason, noting that: “culture is not a dependent variable” (1976, p. 206). The variable “culture” remains just that: variable and dynamic, qualitative not quantitative. By this time, Murdock himself had not found the universalist approach provided the promised understanding of culture through this universalist methodology, and he renounced such an approach (Murdock, 1971, p. 19). The universalist approach using Hofstede's dimensions has also failed to deliver on its promise. As observed by Harrison and McKinnon in management accounting research: there has been too much selectivity among the cultural dimensions; cultural dimensions have been treated as equally important across nation states, and the value dimensions have been accorded only a superficial and naive understanding (1999, p. 502). Such problems have ramifications for the utilization of Hofstede's cultural indices, and implications for cross-cultural accounting research which should not be ignored. The use of Hofstede's indices of cultural dimensions appeared to give cross-cultural studies in accounting stature and scientific legitimacy, and respectability within accounting research. Those researchers who utilize these dimensions successfully should be prepared to include in their application of the cultural indices a consideration of how their research addressed the problems of the concept of nations versus cultures, and the problems inherent in the universalist approach as debated earlier last century during the formative years in anthropology.