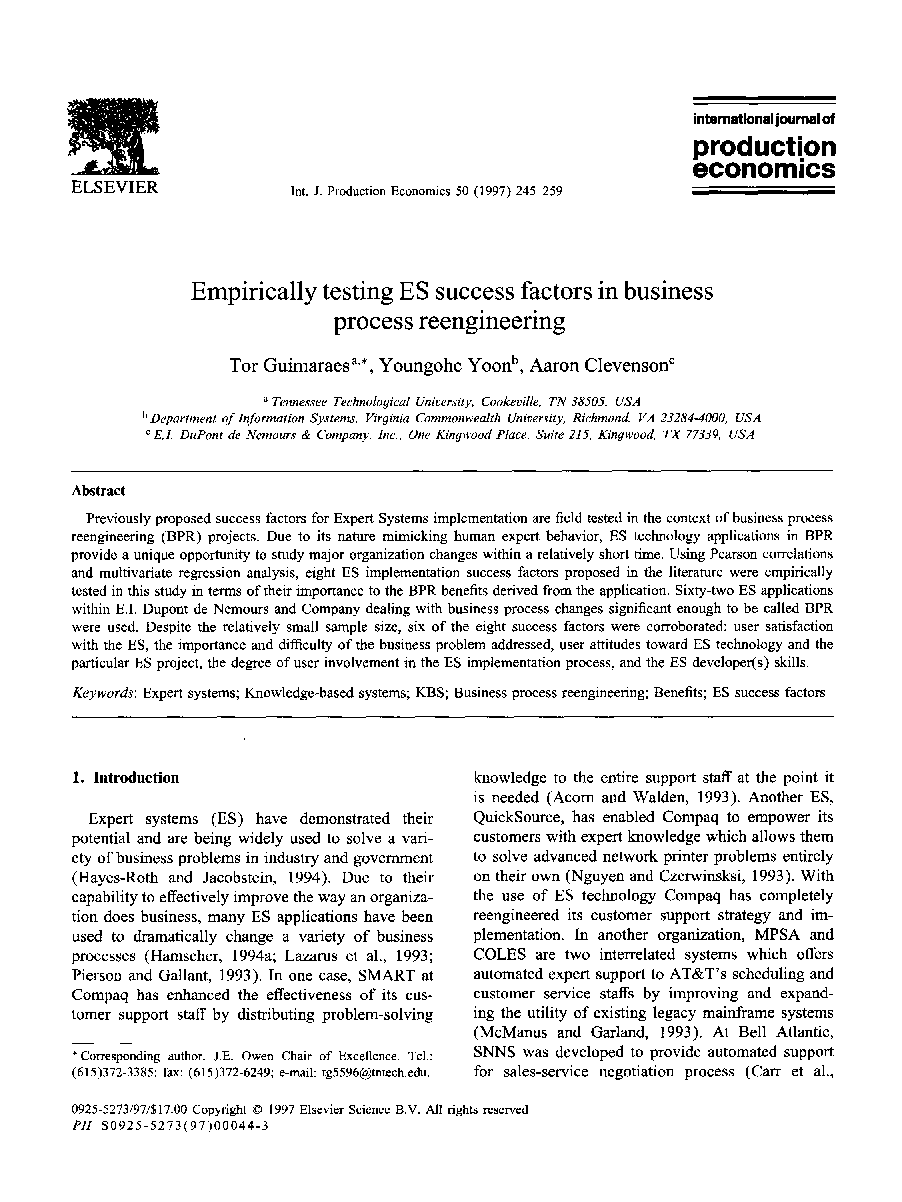 Previously proposed success factors for Expert Systems implementation are field tested in the context of business process reengineering (BPR) projects. Due to its nature mimicking human expert behavior, ES technology applications in BPR provide a unique opportunity to study major organization changes within a relatively short time. Using Pearson correlations and multivariate regression analysis, eight ES implementation success factors proposed in the literature were empirically tested in this study in terms of their importance to the BPR benefits derived from the application. Sixty-two ES applications within E.I. Dupont de Nemours and Company dealing with business process changes significant enough to be called BPR were used. Despite the relatively small sample size, six of the eight success factors were corroborated: user satisfaction with the ES, the importance and difficulty of the business problem addressed, user attitudes toward ES technology and the particular ES project, the degree of user involvement in the ES implementation process, and the ES developer(s) skills.

Expert systems (ES) have demonstrated theirpotential and are being widely used to solve a varietyof business problems in industry and government(Hayes-Roth and Jacobstein, 1994). Due to theircapability to effectively improve the way an organizationdoes business, many ES applications have beenused to dramatically change a variety of businessprocesses(Hamscher, 1994a; Lazarus et al., 1993;Pierson and Gallant, 1993). In one case, SMART atCompaq has enhanced the effectiveness of its customersupport staff by distributing problem-solvingknowledge to the entire support staff at the point itis needed (Acorn and Walden, 1993). Another ES,QuickSource, has enabled Compaq to empower itscustomers with expert knowledge which allows themto solve advanced network printer problems entirelyon their own (Nguyen and Czerwinsksi, 1993). Withthe use of ES technology Compaq has completely reengineered its customer support strategy and implementation.In another organization, MPSA andCOLES are two interrelated systems which offersautomated expert support to AT&T’s scheduling andcustomer service staffs by improving and expandingthe utility of existing legacy mainframe systems(McManus and Garland, 1993). At Bell Atlantic,SNNS was developed to provide automated supportfor sales-service negotiation process (Carr et al.,1994). This system has significantly improved salesefficiency and optimized customer contact time.While ES have been recognized as importantmplementation vehicles for Business ProcessReengineering (BPR) (Friedenberg and Rice, 1994;Hamscher, 1994b), in some cases ES developmenthas been extremely difficult or failed. There are manyES which have been rejected by their target user community(Coats, 1988; Keyes, 1989b; Sloane, 1991).Many of the failures may be due to the urgency andmassive changes associated with BPR projects. Thus,a burning issue deals with whether or not the factorsaffecting ES success or failure under BPR conditionsare the same as the ones found important under less“dramatic change conditions”. While some may believethat there should be no difference, this needs to betested empirically. The purpose of this study is to empiricallytest, under conditions of “dramatic changesto the business process” involved, the set of factorsproposed earlier (Yoon, Guimaraes and O’Neal,1995) as determinants of ES success when the systemis used for automating existing business processes ormaking relatively small changes in the process model.

The means, standard deviations, and intercorrelationcoefficients for the major study variables arepresented in Table 2. Despite the relatively small samplesize, the correlations reveal that six of the eightindependent variables are directly related to the dependentvariable (the benefits from using ES in businessprocess innovation) at the 0.05 significance levelor better: problem importance, problem difficulty,developers skills, end-users characteristics, user satisfaction,user involvement and management support.Based on the results, hypothesis H(1): User satisfactionis positively related to ES success, is acceptedat the 0.01 significance level. Hypothesis H(8): Userinvolvement is positively related to user satisfaction,is accepted at the 0.05 level, and H(3): Problem importanceispositively related to user satisfaction, andH(4): Problem di’culty is positively related to usersatisfaction, are accepted at the 0.1 level. The otherhypotheses, H(2): Managerial support is positivelyrelated to ES success, H(5): Developer(s) characteristicsare positively related to user satisfaction,H(6): End-user characteristics are positively relatedto user satisfaction, and H(7): Shell characteristics are positively related to user satisfaction, cannot beaccepted based on these sample results. Strictly for exploratory purposes, to test for anydifferences along the major variables related to ESapplication functional area, the 62 subjects weredivided into two groups:non-manufacturing andmanufacturing. There were 38 non-manufacturingES and 24 manufacturing ES. The Mann-Whitneytests results in Table 3 reveal significant differencesbetween non-manufacturing and manufacturing ESalong problem difficulty and management support. The problem difficulty of non-manufacturing ES issignificantly lower from that of manufacturing ES atthe 0.05 level or better. The management support ofnon-manufacturing ES is significantly higher at the0.05 significant level or better. These differences canbe explained, at least partly, by two observations.First, in the host organization the developers for manufacturing ES tend to be more experienced withthe technology and willing to tackle more difficultproblems than developers/domain experts in nonmanufacturingareas. Second, the extensive use of EStechnology to address manufacturing problems hasled to a “nothing new” attitude by managers. On theother hand, managers in non-manufacturing areas are more enthusiastic about the use of a relatively newtechnology for addressing their business problems.To test whether the major study variables are significantlydifferent depending upon the problem type addressedby the ES, the 62 subjects were classified intofour groups of problem categories: control, selection,diagnostics, and others. There were 9, 17, 13, and 23 subjects for each group, respectively. The K-W onewayanalysis of variance were performed to test for thepossibility that ES problem categories may influencethe major variables. The results of these tests shownin Table 4 indicate significant differences on end-user characteristics and ES development tool characteristicsfor the four ES problem categories. These differencescan be explained in the context of the hostorganization by the following observations. ProcessControl Systems and many of the “other” systems areprimarily used by engineers, while the Selection andDiagnostics Systems are likely to be used by operatorsand mechanics. Engineers on the average have moreyears of education and fewer years of job experiencethan the latter. Furthermore, operators and mechanicsare more likely to be told to use ES than engineers,who tend to take the initiative and have a more positiveattitude about it.To detect any differences between ES developedwith different building tools, the responses were dividedinto two groups: ES developed with the RS shellversus non-RS shells. There were 22 and 40 ES builtwith non-RS and the RS shell, respectively. Table 5presents the results of the M-W tests, showing thatES developed with the RS shell received significantlyhigher management support. The likely explanationfor this result is that the RS shell was developed bythe DuPont ES group. Subsequently, the RS shell wassold to a software vendor company with DuPont havinga site license.While the intercorrelation analysis provided evidencefor the relationships of each independentvariable with the dependent variable, it did not takeinto account the possible interrelations among theindependent variables. To examine that, a preliminaryintegrated model determining BPR benefitsfrom ES application was tested via multivariateregression analysis, which results are shown inTable 6.Using the stepwise method for first entering theindependent variables which contribute the most tostatistically explaining the variance in the dependentvariable, the results indicated that, in total, closeto 40% of the variance can be explained with thisintegrated model. To test the possibility of multicollinearity among the independent variable, the wellestablished ‘condition number diagnostic’ approach was used (Jobson, 1991). If the condition number isless than 100, multicollinearity is not to be considereda problem. Table 6 indicates the highest conditionnumber is 48.69, well below the safe limit.of the business process or problem addressed by theES (7.47%). The contribution from the other determinantsin this model, given the order in whichthey have entered the regression equation, were notstatistically significant.Based on this multivariate regression model, therwere two statistically significant (at the 0.05 levelor better) determinants for BPR benefits: user satisfactionwith the ES explains 23.41% of the variancein BPR benefits, followed by the degree of difficulty