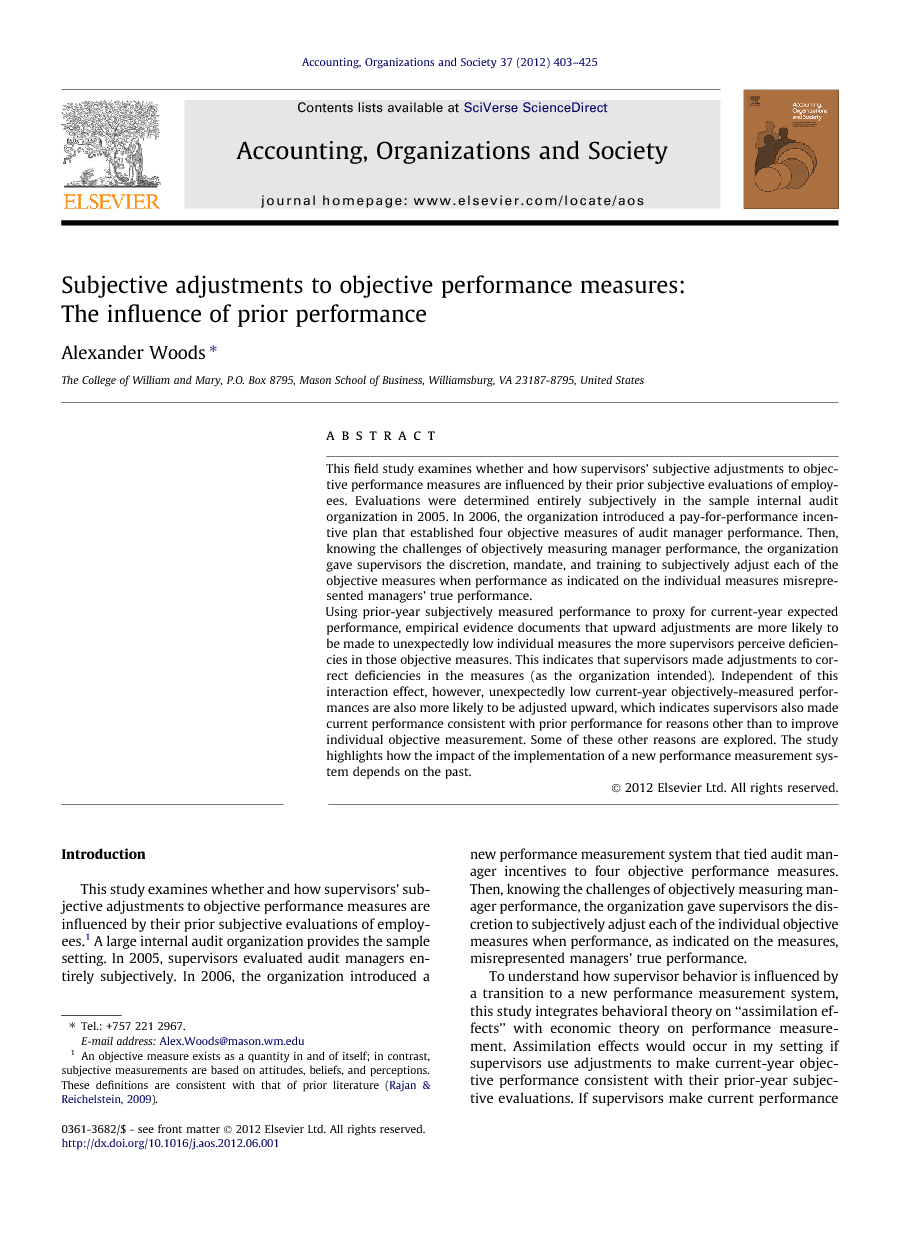 My tests reveal a number of findings. Most adjustments (95%) are upward. Supervisors raise current, unexpectedly low performance so that it is consistent with prior performance when they perceive the measure of that performance is incomplete and noisy, consistent with their mandate of improving objective measurement. Supervisors also raise current, unexpectedly low performance so that it is consistent with prior performance for other reasons, and even apparently holistically (at the manager level). Evidence documents that supervisors make downward adjustments to encourage some employees to leave the organization, and avoid downward adjustments to preclude negative consequences for managers and themselves. Overall, despite the organization’s best attempts to focus all supervisors on the same purpose of improving individual objective measurement, evidence is consistent with supervisors using their discretion over subjective adjustments in a variety of ways. The apparent rogue supervisor behavior shown in this study has also existed in other studies of subjectivity (e.g., Ittner et al., 2003). This paper has a number of limitations. For example, the relative importance of adjustments for measurement properties vis-à-vis “other” reasons remains unclear. Moreover, I only examine a limited number of possibilities, but there are myriad ways in which supervisors could have used adjustments. In addition, given the manner in which the other reasons were measured, they may be related to adjustments by construction only. I also did not measure the performance measures’ “true” deficiencies. Instead, I asked survey participants to judge these deficiencies, and because these judgments were subjective, they likely contained some noise and/or bias. However, I expected supervisors to make subjective adjustments, not based on the true extent of the deficiencies, which they do not know, but based on their perceptions of measure deficiencies. Consistent with prior subjectivity studies, my results suggest that there are many economic and psychological variables affecting subjective adjustments. Indeed, there are limitations in the theory that explains the uses of subjectivity, due in part to the lack of empirical data on this increasingly important topic (Gibbs et al., 2004 and Prendergast, 1999). I also assume that unexpected performance is indicated by deviations between prior year subjectively-measured performance and current-year objectively-measured performance, when “true” manager performance may have actually varied. I mitigate this concern, however, with evidence showing that supervisors’ beliefs about manager performance were remarkably consistent year-on-year. The main test for downward adjustments could not support or refute the theory. A data set with a forced ranking system in place (where upward adjustments to one manager/measure automatically implies a downward adjustment to another), for example, would, provide a more ideal test. Finally, this study is subject to the usual generalizability caveats of a field study, and thus may generalize to similar settings, such as those with low control spans and complex work. This paper has several implications for future research. It would be fruitful to examine how various combinations of subjectivity influence incentive system optimality. Identifying how the benefits and/or costs of subjectivity are impacted by various monitoring systems would also be interesting. I leave the identification of these issues to future research (Ittner & Larcker, 1998).