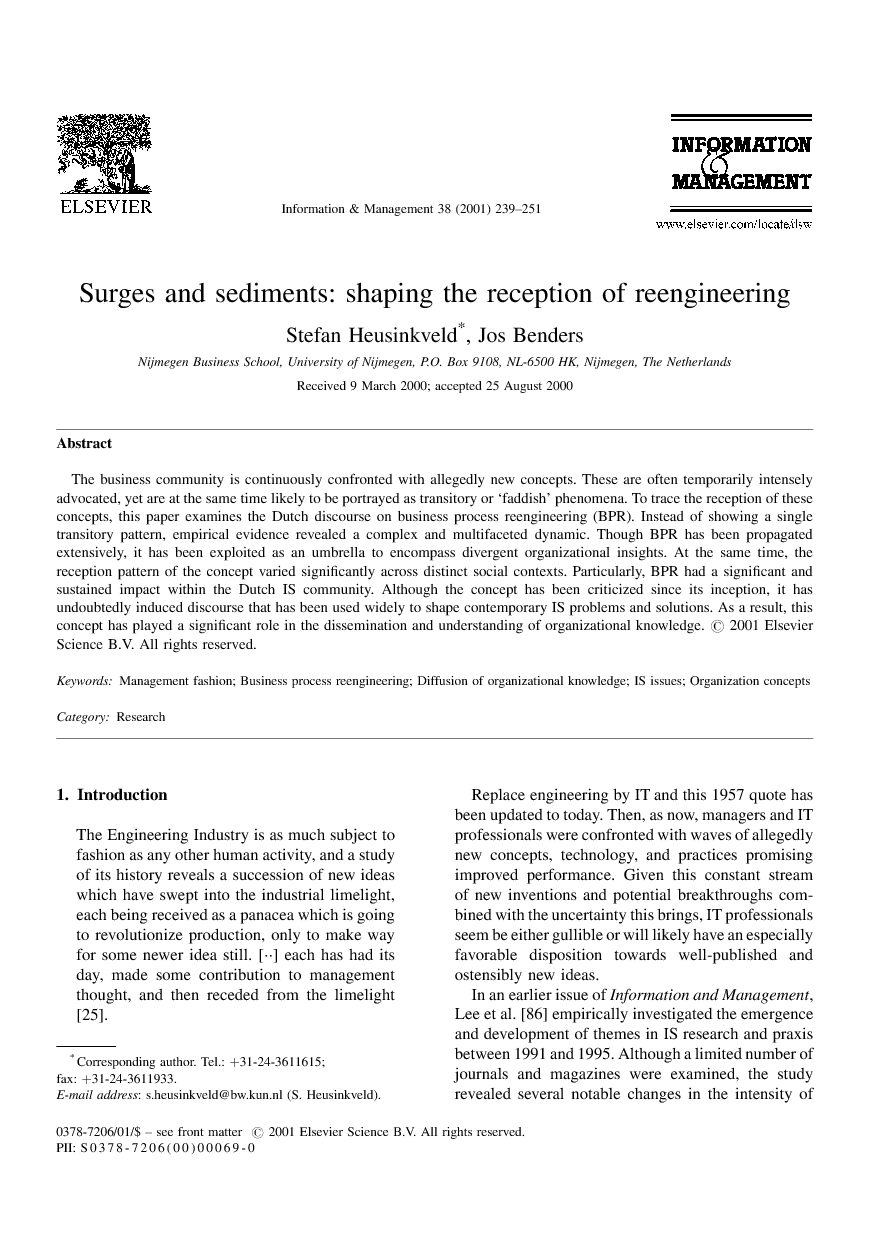 The business community is continuously confronted with allegedly new concepts. These are often temporarily intensely advocated, yet are at the same time likely to be portrayed as transitory or ‘faddish’ phenomena. To trace the reception of these concepts, this paper examines the Dutch discourse on business process reengineering (BPR). Instead of showing a single transitory pattern, empirical evidence revealed a complex and multifaceted dynamic. Though BPR has been propagated extensively, it has been exploited as an umbrella to encompass divergent organizational insights. At the same time, the reception pattern of the concept varied significantly across distinct social contexts. Particularly, BPR had a significant and sustained impact within the Dutch IS community. Although the concept has been criticized since its inception, it has undoubtedly induced discourse that has been used widely to shape contemporary IS problems and solutions. As a result, this concept has played a significant role in the dissemination and understanding of organizational knowledge.

The Engineering Industry is as much subject to fashion as any other human activity, and a study of its history reveals a succession of new ideas which have swept into the industrial limelight, each being received as a panacea which is going to revolutionize production, only to make way for some newer idea still. [··] each has had its day, made some contribution to management thought, and then receded from the limelight [25]. Replace engineering by IT and this 1957 quote has been updated to today. Then, as now, managers and IT professionals were confronted with waves of allegedly new concepts, technology, and practices promising improved performance. Given this constant stream of new inventions and potential breakthroughs combined with the uncertainty this brings, IT professionals seem be either gullible or will likely have an especially favorable disposition towards well-published and ostensibly new ideas. In an earlier issue of InformationandManagement, Lee et al. [86] empirically investigated the emergence and development of themes in IS research and praxis between 1991 and 1995. Although a limited number of journals and magazines were examined, the study revealed several notable changes in the intensity of discourse on particular topics over time. As the initial widespread media attention to these ideas eventually appears to be short-lived, these concepts are quickly dismissed as hypes or fads and considered at odds with the needs of serious managers and professionals [85] and [98]. Nevertheless, these ideas seem to have considerable impact on both organizational discourse and praxis [75]. This has caused researchers to study ‘management fashion’ [1], [3], [63] and [77]. A management fashion is considered as a relatively transitory managerial discourse on a particular concept and organizational changes induced by, and associated with this discourse [15]. We argue that many theoretical efforts on ‘management fashions’ often fail to account for the empirical complexities involved with the reception of these popular concepts. Firstly, present literature treats a business community as a rather homogeneous entity. However, although certain concepts are widely propagated and disseminated, significant differences may occur in the uptake of these concepts within distinct professional and sectoral boundaries. Secondly, processes of re-interpretation or translation parallel the extensive dissemination of these ideas across business communities. However, most of the literature on management fashions provides limited information on the content and scope of an item in a particular social context. As a result, they may impede understanding of the meaning of a concept to a business community or the specific way it has been used. Finally, current literature tends to focus solely on the transitory nature of concepts and management knowledge. Instead, this paper suggests a more multifaceted view in which movements of transience and persistence co-exist. The present study concentrates on the impact of one such ‘fashionable’ concept: business process reengineering, in The Netherlands. We draw on extensive bibliographic data in order to trace the way discourse on this management issue evolved over time. This paper uses a research method that entails the simultaneous application of a qualitative survey with a quantitative analysis based on current bibliographic material. Thus, we seek not only to measure the development in the intensity of discourse on BPR but also to get ‘inside’ the discourse, and seek to understand how it has been socially constructed in a specific business community. Unlike most present theoretical accounts, this study will show a more complex, multifaceted dynamic that is continuously shaping the meaning of a specific concept.

The case of Dutch BPR reception yielded several notable insights. Firstly, the initial ideas entering a Dutch business community have been ‘translated’ in various ways. Often local consultants sought to shape local ideas of BPR. Here they espoused various recipes and ‘grafted’ them on the initial rhetoric of BPR propagated by several prominent American authors. The concept has been exploited as an umbrella to propagate and legitimate the use of divergent methods and techniques on organizational design. We also saw that the initial radical ideas on restructuring business processes are often mediated by drawing on insights from change management as well as concentrating on the social aspects of organizational change. Secondly, instead of showing a single national reception pattern, data from this study indicated that within a national context, distinct communities receive a concept in different ways. In the case of BPR, the IS discipline appears to be particularly susceptible to the ideas associated with this concept. Here BPR offered a legitimate approach to concentrate on business processes and to address both technological and organizational changes in a coherent fashion. As a consequence, IS professionals used BPR discourse to shape present-day problems and solutions concerning the exploitation of IT in organizations. Thirdly, although current literature often stresses the short-lived character of elaborately discussed issues, this paper argues that both transience and longevity may co-exist. Apparently, introducing IT in organizations has never been an unproblematic issue [46] but turned out to be persistent, complex and of all times [114]. Still BPR managed to impel a contemporary extensive discourse on this issue. The concept offered an allegedly new solution to address these issues that, according to its propagators, would yield dramatic performance improvements. However, as these ideas are known for a long time within Dutch academic traditions on organizational design [36], concepts like BPR may be regarded as just an appealing and simplified reformulation of organizational knowledge. Apparently ‘old’ knowledge has been recycled and presented as ‘new’ in different spatial and temporal contexts [69]. Hence, although the issues raised are not new and BPR insights may provide no contribution to the systematic accumulation of organizational knowledge, the concept came to set many present-day managerial agendas. Within several areas the initial large attention to BPR seems to be transient and just faded away towards the end of the 1990s. Though, the IS community shows strong bases that increase the likelihood of entrenchment. We saw that elements of BPR were integrated in system development methodologies and turned out to be common practices within IT implementation projects. Here, the concept played an important part in the dissemination and understanding of organizational knowledge. Finally, this study showed that to understand the way a concept has been received, one must consider the specific way it condensed and crystallized within a particular social context. As a consequence, we argue that a qualitative approach to studying discourse by means of an elaborate content analysis may be complementary to the often-used quantitative data. It moves a study beyond just measuring the extent with which a key word appears in a bibliographic database and merely establishing timing and intensity. Instead, we were able to trace the evolution of a concept within divergent contexts and account for the multifaceted way in which local managerial discourse shaped the meaning of a concept.