عنوان انگلیسی
“When you make manager, we put a big mountain in front of you”: An ethnography of managers in a Big 4 Accounting Firm
دانلود فوری مقاله + سفارش ترجمه 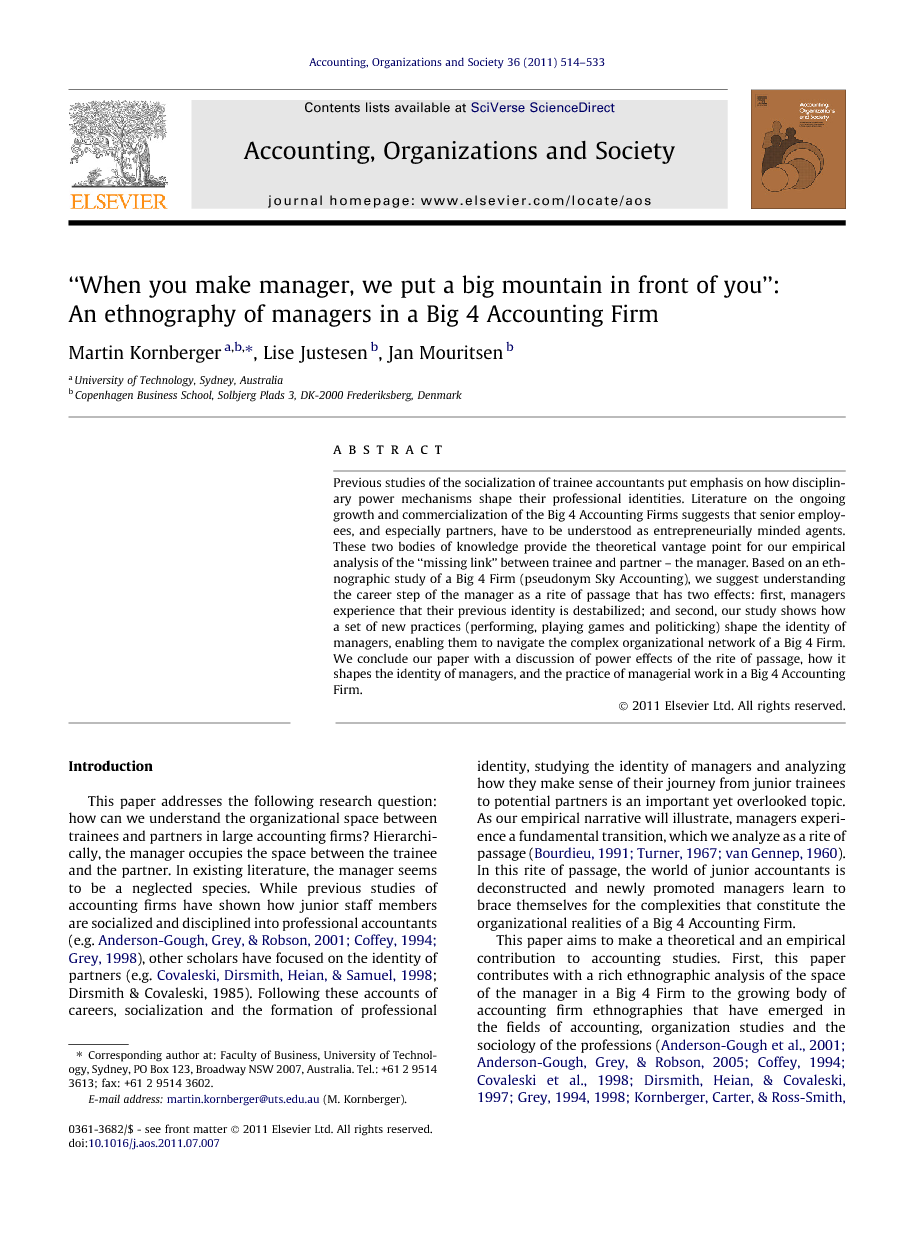 Previous studies of the socialization of trainee accountants put emphasis on how disciplinary power mechanisms shape their professional identities. Literature on the ongoing growth and commercialization of the Big 4 Accounting Firms suggests that senior employees, and especially partners, have to be understood as entrepreneurially minded agents. These two bodies of knowledge provide the theoretical vantage point for our empirical analysis of the “missing link” between trainee and partner – the manager. Based on an ethnographic study of a Big 4 Firm (pseudonym Sky Accounting), we suggest understanding the career step of the manager as a rite of passage that has two effects: first, managers experience that their previous identity is destabilized; and second, our study shows how a set of new practices (performing, playing games and politicking) shape the identity of managers, enabling them to navigate the complex organizational network of a Big 4 Firm. We conclude our paper with a discussion of power effects of the rite of passage, how it shapes the identity of managers, and the practice of managerial work in a Big 4 Accounting Firm.

This paper addresses the following research question: how can we understand the organizational space between trainees and partners in large accounting firms? Hierarchically, the manager occupies the space between the trainee and the partner. In existing literature, the manager seems to be a neglected species. While previous studies of accounting firms have shown how junior staff members are socialized and disciplined into professional accountants (e.g. Anderson-Gough et al., 2001, Coffey, 1994 and Grey, 1998), other scholars have focused on the identity of partners (e.g. Covaleski, Dirsmith, Heian, & Samuel, 1998; Dirsmith & Covaleski, 1985). Following these accounts of careers, socialization and the formation of professional identity, studying the identity of managers and analyzing how they make sense of their journey from junior trainees to potential partners is an important yet overlooked topic. As our empirical narrative will illustrate, managers experience a fundamental transition, which we analyze as a rite of passage (Bourdieu, 1991, Turner, 1967 and Van Gennep, 1960). In this rite of passage, the world of junior accountants is deconstructed and newly promoted managers learn to brace themselves for the complexities that constitute the organizational realities of a Big 4 Accounting Firm. This paper aims to make a theoretical and an empirical contribution to accounting studies. First, this paper contributes with a rich ethnographic analysis of the space of the manager in a Big 4 Firm to the growing body of accounting firm ethnographies that have emerged in the fields of accounting, organization studies and the sociology of the professions (Anderson-Gough et al., 2001, Anderson-Gough et al., 2005, Coffey, 1994, Covaleski et al., 1998, Dirsmith et al., 1997, Grey, 1994, Grey, 1998, Kornberger et al., 2010 and Pentland, 1993). The paper complements these critical studies on the early socialization of trainees (e.g. Anderson-Gough et al., 2001, Coffey, 1994 and Grey, 1994) and the work on identities of partners (e.g. Covaleski et al., 1998) by analyzing the “missing link” between trainees and partners – managers. Our study provides a more complete empirical understanding of that important, yet under-researched, missing link. Second, the paper advances our theoretical understanding of the identity of managers and the practice of managerial work in the context of a Big 4 Firm. Following Hinings, Greenwood, and Cooper (1999, p. 151), it is pivotal to understand what management actually means in the context of accounting firms, i.e., “[t]he issue for these firms is recognizing something called ‘management’ which goes beyond financial.” If management is indeed one of the central features of the managed professional business (MPB) (Cooper, Hinings, Greenwood, & Brown, 1996), we need to theorize the identity of managers and the practice of managerial work in a global Big 4 Firm – a task we undertake in the theoretical contribution of our paper.

In this paper we have presented an ethnographic analysis of the organizational space of managers in a Big 4 Accounting Firm. Based on the accounts of the Sky managers studied, they experienced the rite de passage as destabilizing their previous identities. Simultaneously, managers found themselves embedded in a complex network of clients, junior staff, and partners. A set of new practices (performing, playing games, and politicking) enabled them to navigate the complex organizational network. By extension, it also re-shaped their identities. Power relations were extensive in that managers stretched themselves across the network, aiming for visibility to anticipate problems. In conclusion, our analysis has two implications for further research. First, our narrative gives rise to questions about management as institutionalized practice and its relation to rationality and efficiency. Institutionally, managers have to act as guardians of efficiency; their “visible hand” (Chandler, 1977) is legitimized through its ability to coordinate affairs efficiently. Seen from our managers’ perspective, efficiency was an imperfect modus operandi. In fact, efficiency is an unreliable principle in a relational network because many interdependent variables have to be taken into account simultaneously. Efficiency only works as a guiding principle if optimization between means and ends can be calculated. At Sky Accounting, being an efficient client manager might imply being a poor team manager, and being an efficient time manager might mean not taking enough time for activities that generate visibility. In order to do their jobs, managers have to resort to a whole set of activities (performing, playing games, politicking) that are not efficient. To be visible and develop a “fame agenda” might ironically limit the time managers have to accomplish “real” work, diverting their efforts to the representation of success rather than the actual accomplishment of results. This lack of efficiency was not due to some form of bounded rationality that would limit managers’ cognitive abilities. Rather, their rationality was framed ontologically by a network and epistemologically by pragmatism, making managers realize that being efficient did not equal doing a job efficiently. Performing, playing games, and politicking enabled managers to be seen as efficient; but, ironically, these very activities may take up time and resources that make the organization as a whole less equipped to solve problems efficiently. Therein lies the paradox of managing that future research may address: on the one hand, the manager is the agent of an organization and acts in the name of organizational efficiency. Yet, the practice of managing consists of constant repair work, performing, game playing, and politicking across a complex network. The manager inhabits the impossible space of being the supposedly rational and efficient agent of the organization who has to step outside organizational rationality to make the network flow, repair it, and cope with its fallacies. If management is a congenitally failing operation (Miller & Rose, 2008), the manager is its tragicomic figure within whom the authority of the rational and efficient system and the need to subvert it in the name of unpredictable contingencies clash. Ironically, this means that it is those who manage organizations that do not act according to the efficiency principle that supposedly guides the organizations they lead. While critical scholars (e.g. Brunsson, 1993 and Meyer and Rowan, 1977) have repeatedly illustrated the gap between rational façade and irrational action as a consequence of organizational and environmental decoupling, our paper nurtures the suspicion that it is management who congenitally reproduces the gap between the rhetoric of efficiency and the reality of performing, playing games, and politicking. Second, our study emphasizes the importance of ethnographic research methodologies. While Sky Accounting, with its professional status, its well-dressed employees, and its 6-min time regime might seem like the epitome of rationality, the reality of organizing that we observed at the manager level tells a different story. Performance means not being efficient but being seen to act efficiently; what you know is not the only thing worth knowing – who you know becomes more important; and game playing introduces a new dynamic in which unwritten rules trump the (supposedly rational) rules of the organization. Performing, playing games, and politicking added a new dimension to the organization that cannot be described following the logic of an economic rationality. The homo oeconomicus makes bad partner material, indeed. Yet accounting firms represent bastions of rationality in our society: they asses, they evaluate, they audit, and they manage risk. We can only speculate about the moral dilemma that opened up between the encouragement at Sky Accounting to steal from the best, and breed black swans, on the one hand, and the expectations of diligence, predictability, and accuracy from clients and other stakeholders on the other. Further studies on the anthropology of managers (and partners) who act as providers of rationality and hence legitimacy to large parts of society promise practically relevant and theoretically surprising results. Authoritative accounts of Wall Street such as, Liquidated: An ethnography of Wall Street(2009), by former business analyst and now academic anthropologist Karen Ho, and Fool’s gold(2010), by trained anthropologist and now senior editor at the FT, Gillian Tett, might provide guidance for such a political anthropology of our economic (dis)order, and those forces that produce it.