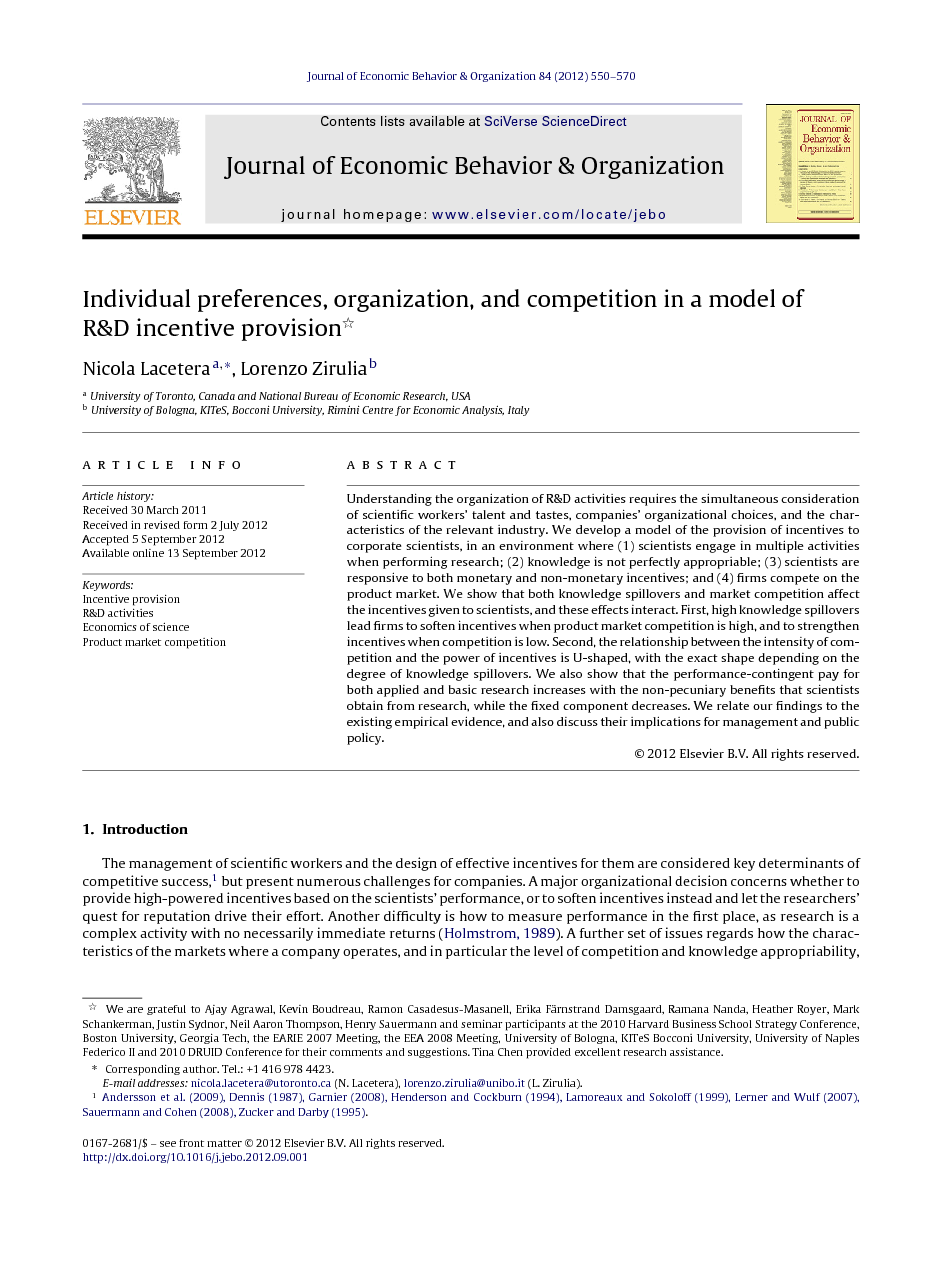 Understanding the organization of R&D activities requires the simultaneous consideration of scientific workers’ talent and tastes, companies’ organizational choices, and the characteristics of the relevant industry. We develop a model of the provision of incentives to corporate scientists, in an environment where (1) scientists engage in multiple activities when performing research; (2) knowledge is not perfectly appropriable; (3) scientists are responsive to both monetary and non-monetary incentives; and (4) firms compete on the product market. We show that both knowledge spillovers and market competition affect the incentives given to scientists, and these effects interact. First, high knowledge spillovers lead firms to soften incentives when product market competition is high, and to strengthen incentives when competition is low. Second, the relationship between the intensity of competition and the power of incentives is U-shaped, with the exact shape depending on the degree of knowledge spillovers. We also show that the performance-contingent pay for both applied and basic research increases with the non-pecuniary benefits that scientists obtain from research, while the fixed component decreases. We relate our findings to the existing empirical evidence, and also discuss their implications for management and public policy.

The main insight from this first set of results is not only that such characteristics as product market competition and knowledge spillovers matter in the determination of incentives to scientists, but also that they interact. In addition to this theoretical insight, a major implication for empirical analysis is that the structure of the industry and the IP regimes need to be controlled for when assessing the determinants of scientists’ pays and incentive structures. Cockburn et al. (1999), for example, find that incentives for basic and applied research are complementary in the pharmaceutical industry: when firms commit to high-powered incentives to obtain recognition in the scientific community, they also offer higher-powered rewards for applied activities. The authors use data at the level of research programs; arguably, different research programs refer to different final product markets, thus our model suggests an extension of the work of Cockburn et al., consisting of the estimate of the relation between basic and applied research incentives separately for each submarket, in order to account for potentially different competitive and knowledge-appropriability conditions. In a study of the wage determination of software developers, Andersson et al. (2009) find that wages are more responsive to performance in more “risky” industry segments, where riskiness is measured in terms of the 90/50 ratio of product line sales per worker. The authors offer a sorting explanation for their results. Firms in highly risky environments benefit more from having star workers. In order to attract them, firms offer a better pay, both in terms of fixed and performance related-wage. Our results point to additional (though not necessarily mutually exclusive) explanations. Consider, for example, the video game software developing/publishing segment, indicated by Andersson et al. as the riskiest in their sample. Williams (2002), moreover, reports that this segment has experienced increased concentration over the 1990s, up to a four-firm concentration ratios greater than 50% in the early 2000s. The IT-software online journal SoftwareMag.com publishes a list of the biggest software companies. Among the 100 biggest companies of this survey, only two declare “Database” as their primary product line; eight indicate software for financial applications, and nine indicate infrastructure/networking software. Among these three segments, Andersson et al. indicate “networking” as the riskiest, and “database” as the least risky. Therefore, some of the riskiest segments of the industries are also those where firms are of larger size, which in our model corresponds to lower competitive pressure. In addition, intellectual property protection in software is relatively weak, and knowledge spillovers are pervasive.15 If higher riskiness happens to be associated with the presence of larger firms, then our model predicts that companies offer higher powered incentives in less competitive product lines (where firms are larger). The above results provide also insights to the “endogenous spillovers” literature that studies the choice of how “close” or “open” firm decide to make their research (Katsoulacos and Ulph, 1998, Lambertini et al., 2004, Milliou, 2009 and Piga and Poyago-Theotoky, 2005). Within this literature, the paper that is closest to ours is Milliou (2009). In an environment with one-dimensional research effort, this paper shows that firms can decide to make their research publicly available, especially when competition is not too intense. We obtain a similar result; however, by modeling two-dimensional effort, with different degrees of openness or spillovers, we specify that, even if the absolute amount of open research may increase, the strength of incentives for open research relative to appropriable research always decreases when spillovers are higher. Distinguishing between absolute and relative investments in types of research can therefore have important implications.