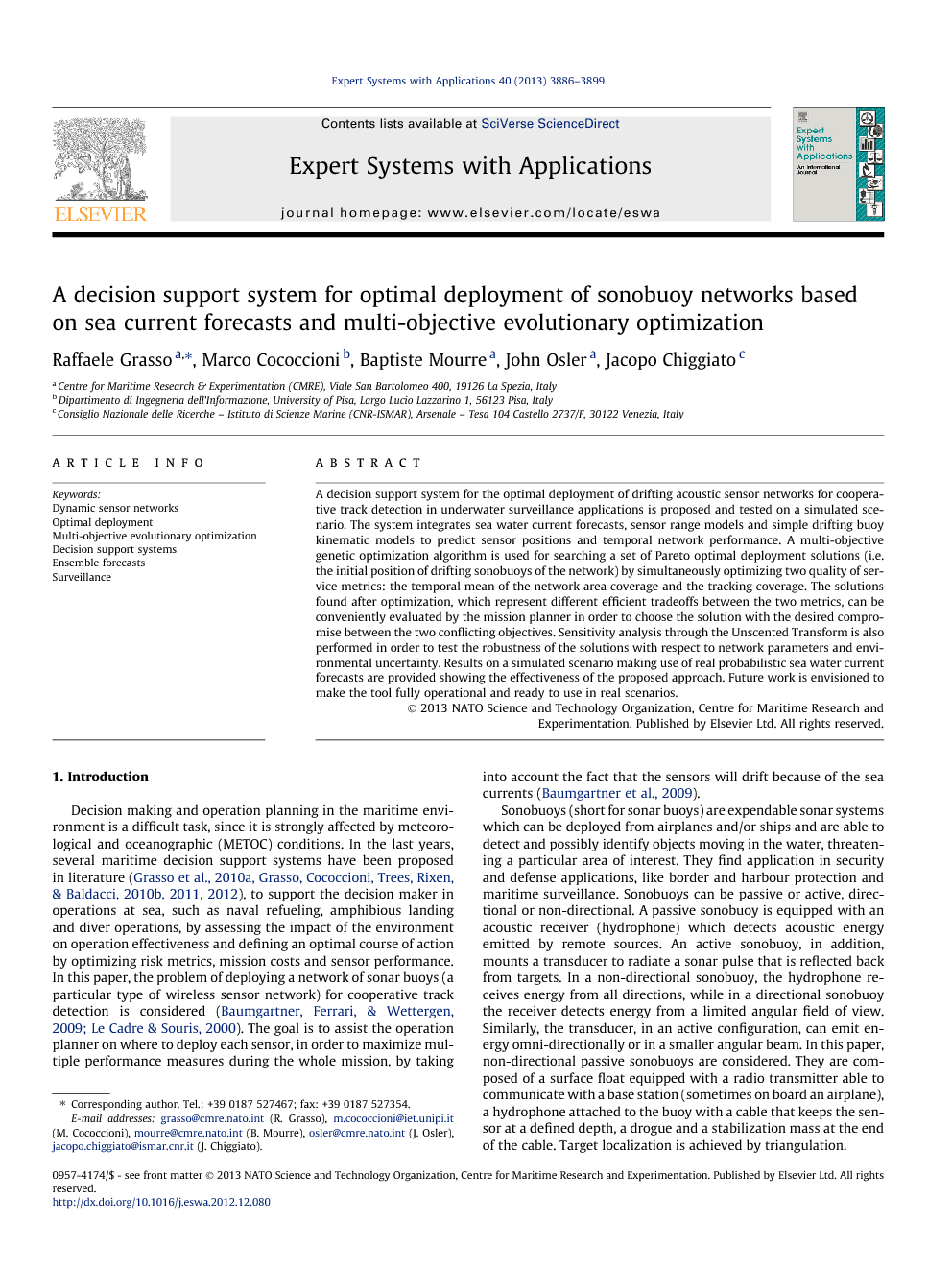 A decision support system for the optimal deployment of drifting acoustic sensor networks for cooperative track detection in underwater surveillance applications is proposed and tested on a simulated scenario. The system integrates sea water current forecasts, sensor range models and simple drifting buoy kinematic models to predict sensor positions and temporal network performance. A multi-objective genetic optimization algorithm is used for searching a set of Pareto optimal deployment solutions (i.e. the initial position of drifting sonobuoys of the network) by simultaneously optimizing two quality of service metrics: the temporal mean of the network area coverage and the tracking coverage. The solutions found after optimization, which represent different efficient tradeoffs between the two metrics, can be conveniently evaluated by the mission planner in order to choose the solution with the desired compromise between the two conflicting objectives. Sensitivity analysis through the Unscented Transform is also performed in order to test the robustness of the solutions with respect to network parameters and environmental uncertainty. Results on a simulated scenario making use of real probabilistic sea water current forecasts are provided showing the effectiveness of the proposed approach. Future work is envisioned to make the tool fully operational and ready to use in real scenarios.

Decision making and operation planning in the maritime environment is a difficult task, since it is strongly affected by meteorological and oceanographic (METOC) conditions. In the last years, several maritime decision support systems have been proposed in literature (Grasso et al., 2010a, Grasso et al., 2010b, Grasso et al., 2011 and Grasso et al., 2012), to support the decision maker in operations at sea, such as naval refueling, amphibious landing and diver operations, by assessing the impact of the environment on operation effectiveness and defining an optimal course of action by optimizing risk metrics, mission costs and sensor performance. In this paper, the problem of deploying a network of sonar buoys (a particular type of wireless sensor network) for cooperative track detection is considered (Baumgartner et al., 2009 and Le Cadre and Souris, 2000). The goal is to assist the operation planner on where to deploy each sensor, in order to maximize multiple performance measures during the whole mission, by taking into account the fact that the sensors will drift because of the sea currents (Baumgartner et al., 2009). Sonobuoys (short for sonar buoys) are expendable sonar systems which can be deployed from airplanes and/or ships and are able to detect and possibly identify objects moving in the water, threatening a particular area of interest. They find application in security and defense applications, like border and harbour protection and maritime surveillance. Sonobuoys can be passive or active, directional or non-directional. A passive sonobuoy is equipped with an acoustic receiver (hydrophone) which detects acoustic energy emitted by remote sources. An active sonobuoy, in addition, mounts a transducer to radiate a sonar pulse that is reflected back from targets. In a non-directional sonobuoy, the hydrophone receives energy from all directions, while in a directional sonobuoy the receiver detects energy from a limited angular field of view. Similarly, the transducer, in an active configuration, can emit energy omni-directionally or in a smaller angular beam. In this paper, non-directional passive sonobuoys are considered. They are composed of a surface float equipped with a radio transmitter able to communicate with a base station (sometimes on board an airplane), a hydrophone attached to the buoy with a cable that keeps the sensor at a defined depth, a drogue and a stabilization mass at the end of the cable. Target localization is achieved by triangulation. A number of sonobuoys can be deployed in the area of interest to form a wireless sensor network having an architecture that is usually centralized with a base station serving as a central data fusion node. The performance of sonobuoy networks typically degrades with time due to sensor drift and acoustic variability in the surveillance area (Baumgartner et al., 2009). Due to the un-controllable drifting movement of sensors, the detection area covered by the network and the number of sensors able to detect a target entering the area of interest from a particular direction can significantly change over time (Baumgartner et al., 2009). The spatial and temporal acoustic variability of the area of interest further affects the network performance due to variations of the effective detection range of sensors (Baumgartner et al., 2009). In order to achieve an almost constant level of network quality of service in a specified temporal window, the initial position of each sonobuoy can be chosen by optimizing a set of objectives, with the dynamic of the network and the sensor characteristics as constraints. This technique is referred to as dynamic sensor network optimal deployment (OD) and is alternative to other common methods like the random and the grid deployment ones (Baumgartner et al., 2009). OD requires integrating sea water current forecasts, acoustic propagation models and sonobuoy drifting models, a process that could not be afforded by the operation planner without an integrated decision support system (DSS) environment that acquires data over the area of interest in a predefined time window, integrates data and mission parameters in an optimization scheme, provides and ranks solution hypothesis, and tests solution robustness against environmental and non-environmental uncertainty. In this paper, a DSS for OD of dynamic sensor networks is proposed and tested on a synthetic scenario. The main modules of the system are (i) a network simulator to predict sensor trajectories given a 4D forecast of the current field, (ii) a network performance calculator given sensor trajectories and sensor effective detection range predictions, (iii) an optimizer to provide OD solutions (i.e. initial sensor positions) and (iv) a sensitivity analysis module to test the robustness of the solution against the uncertainty of the environment and network parameters. The proposed framework follows the seminal paper on OD for cooperative track detection by Baumgartner et al. (2009), who first developed the technique by optimizing the weighted sum of the mean network area coverage (AC) and the mean k − N track coverage (k − N TC) quality of service indexes (both defined in next section). This work tries to overcome some limitations of the optimization scheme proposed in Baumgartner et al. (2009) by using an evolutionary multi-objective optimization algorithm to give to the user the flexibility of evaluating a full set of Pareto efficient solutions ( Coello Coello et al., 2007 and Deb, 2001) representing tradeoffs between conflicting performance metrics.

In this paper, a decision support system to optimally deploy dynamic sensor networks for underwater cooperative track detection has been proposed and tested on a synthetic scenario using real sea water current forecast data. The system makes use of a simple sonobuoy kinematic model and super ensemble of sea water current forecasts to predict sensors trajectories. The AMGA2 multi-objective evolutionary optimization algorithm is used to search for the best initial deployment positions, by considering two conflicting network quality of service metrics: the area coverage and the track coverage, The algorithm is able to provide a set of Pareto optimal sonobuoy initial positions that maximize the two objectives to different extents, in a given time window and surveillance area, so as to optimize the mean network performance level. The system is able to perform an efficient sensitivity analysis on the chosen solutions through the UT in order to provide network performance statistics and confidence intervals. The estimated super ensemble forecast error covariance is exploited in order to analyze the sensitivity of the solution to environmental factors. The strengths of the proposed approach include a derivative free optimization scheme with no need to specify a set of coefficients to weight the relative importance of considered objectives. The optimizer provides a set of Pareto efficient solutions representing a tradeoff between the conflicting objectives considered. Moreover, environmental factors in the prediction of the network performance are taken into account in a robust way by using first and second order super ensemble sea water current forecast statistics. In addition, the unscented transform allows fast sensitivity analysis to assess the impact of the non-linearity of environmental (and non-environmental) uncertainty to be related to the network performance indexes. The decision support system was tested on a synthetic surveillance scenario by using realistic super ensemble forecast data for an area close to the eastern coast of Sicily, Italy. The optimization procedure achieved good convergence behavior, and was able to reach a Pareto front close to stability after 10,000 evaluations of an objective function within 1 h, thanks to the parallelization of AMGA2. Solutions along the Pareto front exhibit temporal behaviors for the area coverage and the track coverage consistent with the goal of the system of maintaining almost constant network quality of service within the observation window. Future work may include the integration of a model to predict the sensor effective range taking into account the variability of the acoustic environment (Strode, Mourre, & Rixen, 2012). A planning system of the full deployment mission is envisaged which jointly optimizes the deployment sequence constrained by the platform kinematic, operational costs and the environment. Further, the whole mission could be optimized and presented in a virtual environment to visually simulate the whole deployment process, for demonstration and training.