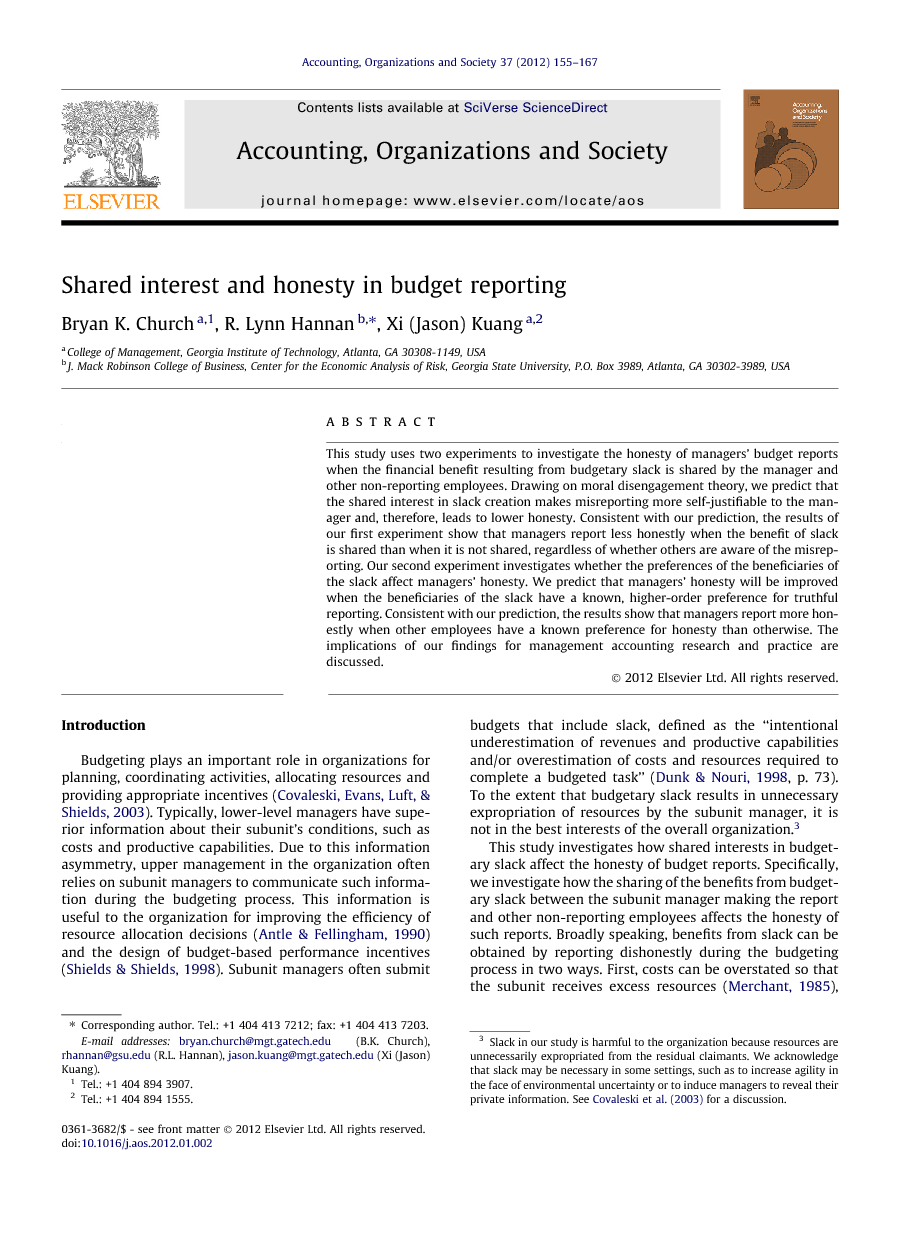 This study uses two experiments to investigate the honesty of managers’ budget reports when the financial benefit resulting from budgetary slack is shared by the manager and other non-reporting employees. Drawing on moral disengagement theory, we predict that the shared interest in slack creation makes misreporting more self-justifiable to the manager and, therefore, leads to lower honesty. Consistent with our prediction, the results of our first experiment show that managers report less honestly when the benefit of slack is shared than when it is not shared, regardless of whether others are aware of the misreporting. Our second experiment investigates whether the preferences of the beneficiaries of the slack affect managers’ honesty. We predict that managers’ honesty will be improved when the beneficiaries of the slack have a known, higher-order preference for truthful reporting. Consistent with our prediction, the results show that managers report more honestly when other employees have a known preference for honesty than otherwise. The implications of our findings for management accounting research and practice are discussed.

We conducted two experiments to investigate the effect of shared interest in slack creation on honesty in budget reporting. Drawing on moral disengagement theory, we argue that managers can self-justify their opportunistic misreporting when the benefits resulting from slack are shared, which in turn leads to less honesty in budget reporting. In our first experiment, we find that, consistent with our prediction, managers report less honestly when the benefit of misreporting is shared with another employee than when the benefit accrues solely to the manager. The result holds irrespective of whether the other employee observes the manager’s report (i.e., whether the other employee has direct knowledge of misreporting). Supplemental data analyses are consistent with the manager using shared interest to self-justify misreporting. This effect of shared interest on budgetary slack is detrimental to organizations because, in our setting, such slack lowers the efficiency of resource allocation and undermines organizational effectiveness. We design a second experiment to investigate whether the other employee’s preference (for honesty or wealth-maximization) affects the manager’s behavior in the presence of shared interest. We contend that when the other employee has a known preference for honest reporting, the manager cannot easily self-justify misreporting. In our second experiment, we measure the other employee’s preference and communicate that preference to the manager. We also include a control level in which no preference is communicated. We find that managers report more honestly when the other employee has a known preference for honesty. By comparison, we do not find any difference in honesty when the other employee has a known preference for wealth-maximization or an unknown preference. Hence, the manager’s default assumption appears to be that the other employee prefers wealth-maximization, at least to a greater extent than honesty. Our research findings are subject to several potential limitations. In our experiment, we use a manager–assistant hierarchical arrangement, in which the manager has complete authority for budget reporting, to preclude possible confounds such as diffusion of responsibility. Yet, this arrangement puts the assistant–participant in a disadvantageous position (i.e., receives a lower base salary). Although our supplemental data provide evidence that managers were unwilling to give up some of their own payoff to make the assistant better off, we cannot rule out the possibility that managers’ reports were influenced by their concerns for the disadvantaged assistant. Further research is needed to investigate whether our results generalize to settings in which slack is shared with employees who are not disadvantaged relative to the reporting manager. Providing the manager with complete authority also abstracts away from group settings where the firm may benefit by allowing subordinate input into the decision process or by group-based incentive plans. Future research could investigate how the potential costs indentified in our study interact with these types of benefits from group settings. In addition, our failure to find support for H2a could be due to weak manipulation of the assistant’s awareness of misreporting (i.e., the manager and assistant do not know each other and the manager’s decision is anonymous). It would be interesting to investigate whether the results would differ if the familiarity or intimacy between the manager and assistant were increased. Finally, to eliminate fairness concerns, we do not have a participant act as the headquarters in the experiment. Such concerns, however, may be present in naturally occurring organizational settings. Future research can explore whether and how the manager’s general honesty level is influenced by fairness concerns. We note that, because this paper focuses on incremental effects observed by comparing between experimental conditions, our results are not likely to be systematically affected by the absence of a headquarters–participant. Despite these limitations, our findings have important implications for organizations regarding how to induce managers to truthfully communicate private information. If the organization can build an ethical organizational environment in which most employees live up to pro-social moral principles, it would be difficult for managers to justify potential opportunistic behavior and, thereby, would likely curb or mitigate such behavior. This type of preemptive control approach may be more effective than the traditional, compliance approach that ex post disciplines misbehavior ( Booth and Schultz, 2004, Murphy, 1993 and Paine, 1994). Otherwise, to the extent that employees’ moral values are generally low or ambivalent, the quality of information transmitted within the organization may be undermined.