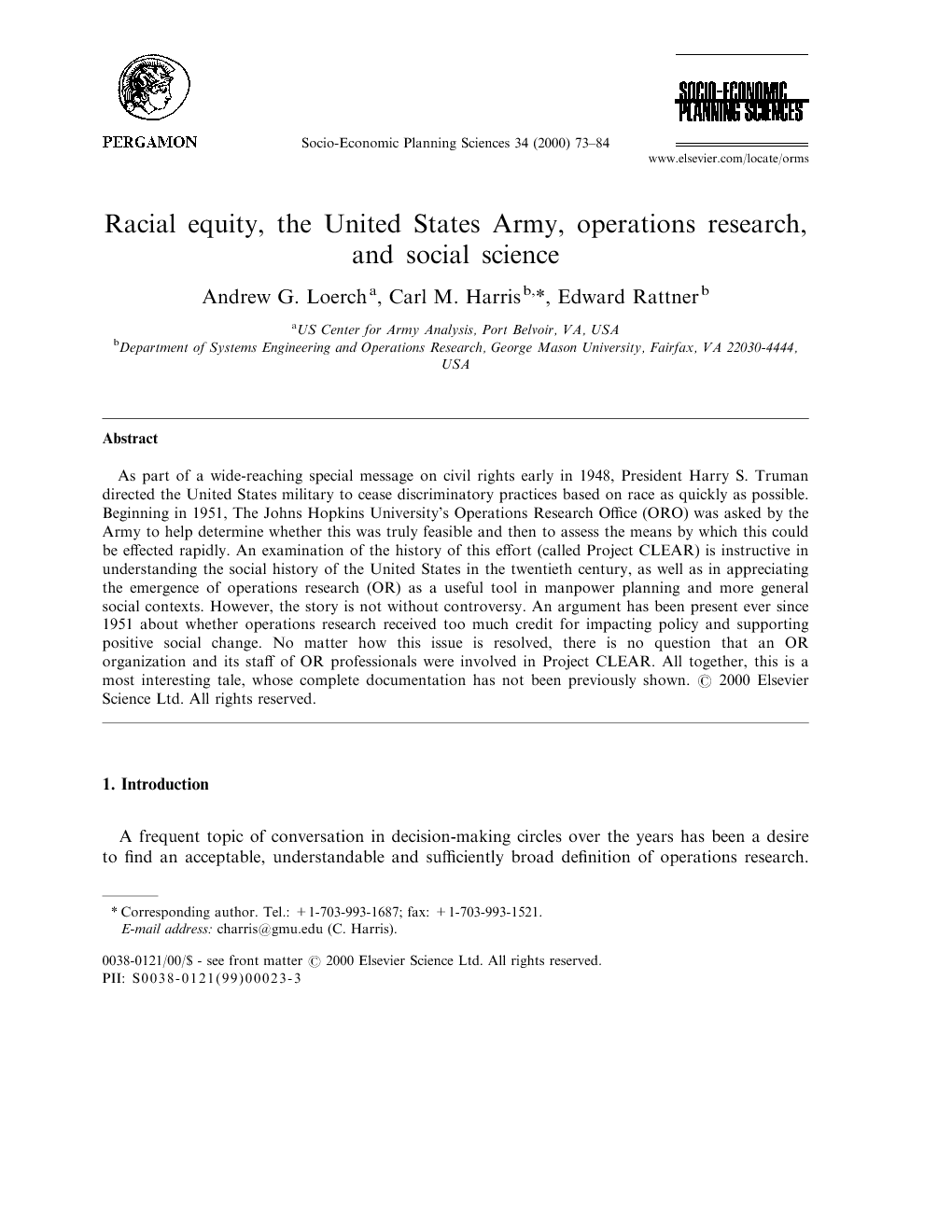 As part of a wide-reaching special message on civil rights early in 1948, President Harry S. Truman directed the United States military to cease discriminatory practices based on race as quickly as possible. Beginning in 1951, The Johns Hopkins University’s Operations Research Office (ORO) was asked by the Army to help determine whether this was truly feasible and then to assess the means by which this could be effected rapidly. An examination of the history of this effort (called Project CLEAR) is instructive in understanding the social history of the United States in the twentieth century, as well as in appreciating the emergence of operations research (OR) as a useful tool in manpower planning and more general social contexts. However, the story is not without controversy. An argument has been present ever since 1951 about whether operations research received too much credit for impacting policy and supporting positive social change. No matter how this issue is resolved, there is no question that an OR organization and its staff of OR professionals were involved in Project CLEAR. All together, this is a most interesting tale, whose complete documentation has not been previously shown.

A frequent topic of conversation in decision-making circles over the years has been a desire to find an acceptable, understandable and sufficiently broad definition of operations research. What defines an OR study and the OR paradigm? What defines an OR person? And, most importantly, where does the discipline find its practical applications? The national operations research and management science professional community has long searched for distinctive “nuggets” to display to the scientific community, and even the public at large, as outstanding examples of the contributions that the field has made to improve quality of life. Though the issues of defining the field and determining its value to decision makers may seem somewhat disparate matters, they came together in a fascinating story which occurred almost coincident with the formal beginnings of the OR/MS profession in the early 1950s, and whose real-life outcome is still being felt today. When the United States emerged from World War II as a victor, it began to address the true meaning of the Declaration’s words that “all men are created equal and endowed with certain unalienable rights.” Of course, it was not an easy matter to overcome approximately 300 years of racially motivated injustice to which the nation’s African–American population had been subjected. It turned out that some of the most significant steps toward equality of treatment and opportunity (and early momentum for the civil rights revolution to come in the 1950s and 1960s) were made by and within the American military, greatly motivated by the need for vast amounts of manpower necessary to allow the United States to wage a successful multi-front war effort and then to remain the World’s number one postwar power. It is probably also fair to say that America was finding it increasingly contradictory to tout itself as “the land of the free and the brave,” while its black citizens were not allowed to reach equal status with their fellow Americans. We are thus saying, in a sense, that the operational pressure of the military’s need to maximize utilization of scarce manpower resources (an operations research problem) had a profound impact on the Nation’s ability to move toward racial harmony (a social problem). There are those who argue that no profession has offered America’s African–American citizens — male and female — more opportunities in the years since the end of World War II than career military service (see [1]). Many of the children and grandchildren of the black men who flew so successfully for Tuskegee’s 99th Pursuit Squadron or walked into the Battle of the Bulge have also served their country’s military well in the years subsequent to World War II. Many African–Americans find themselves today as members of America’s middle class largely in part because of the jump start in life that the military has given through its training programs, educational support, housing loans, and retirement plans. Though by no means free of racial stress, the financial, educational and career opportunities afforded by the armed forces allowed these black military veterans and their families greater proximity to “the enjoyment of the full privileges of citizenship” (words from the special message on civil rights sent to the United States Congress by President Harry S. Truman on 2 February 1948 — see [2], pp. 586–8; [3], pp. 309–14). For more complete details on the Army’s management of racial integration over the subsequent years, the reader is referred to [4] and [5]. For our purposes, the most critical portion of this incredibly far-reaching message was President Truman’s announcement that he had asked Secretary of Defense James Forrestal to stop discrimination in the military services as quickly as possible. (Interestingly, together with this came a request of Congress to begin processing claims made by Americans of Japanese descent who had been taken from their homes and relocated to detention camps — it took 45 years to complete that task.) On July 26, 1948, President Truman converted the military portion of his message into an Executive Order, numbered 9981, wherein he established a Committee on Equality of Treatment and Opportunity in the Armed Forces, to help the military services reach the President’s stated goal of equal treatment and opportunity without regard to race, color, religion or national origin. Largely led by Minneapolis Mayor Hubert Humphrey, Truman’s entire civil rights program was adopted into the Democratic Party platform for the presidential election that was to follow in November 1948. Again to bring things somewhat up to the present, it was precisely this portion of the Democratic plank that caused southern Democrats to split off into a (temporary) new party called the Dixiecrats. The Dixiecrats then fielded a ticket headed by their Presidential nominee, Governor Strom Thurmond of South Carolina, and they won 39 electoral votes that November. Throughout his campaign, Thurmond was frequently heard to say that it was just plain un-American to racially integrate the military [2]. Lest it be thought that racial segregation within the US military was solely a southern matter, it must be noted that this was most certainly not the case. As late as the end of 1950 (with the Korean War already beginning its seventh month), black trainees were segregated at Fort Dix, New Jersey, for example, a mere “stone’s throw” from Manhattan. The then New York Congressman Jacob Javits, who was a constant critic of Army segregation from the very beginning of his congressional service, was especially unhappy about the situation at Fort Dix, where a large percentage of his constituents did basic training. In an exchange of letters with General Marshall, he was politely told to mind his own business [3].