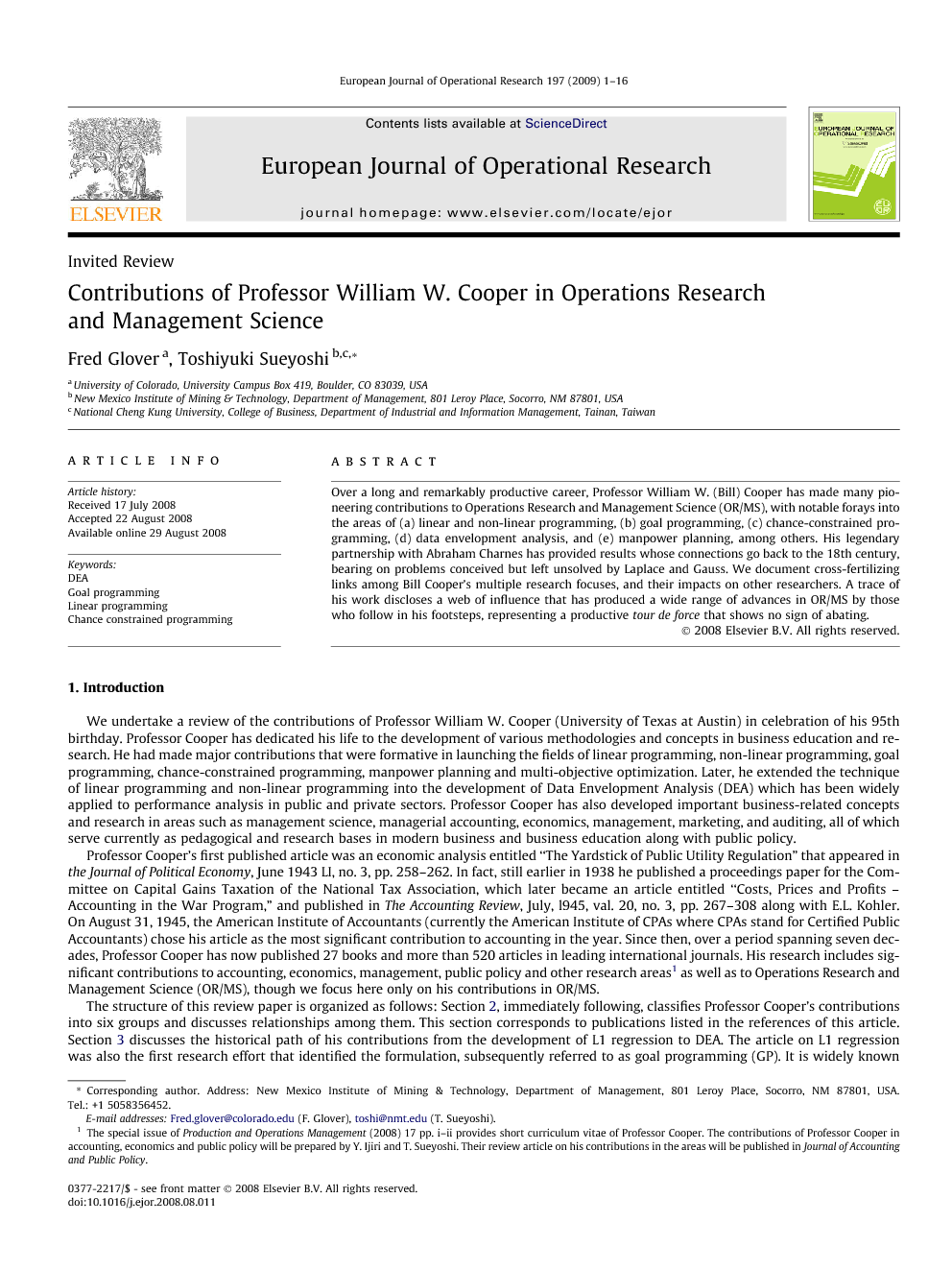 Over a long and remarkably productive career, Professor William W. (Bill) Cooper has made many pioneering contributions to Operations Research and Management Science (OR/MS), with notable forays into the areas of (a) linear and non-linear programming, (b) goal programming, (c) chance-constrained programming, (d) data envelopment analysis, and (e) manpower planning, among others. His legendary partnership with Abraham Charnes has provided results whose connections go back to the 18th century, bearing on problems conceived but left unsolved by Laplace and Gauss. We document cross-fertilizing links among Bill Cooper’s multiple research focuses, and their impacts on other researchers. A trace of his work discloses a web of influence that has produced a wide range of advances in OR/MS by those who follow in his footsteps, representing a productive tour de force that shows no sign of abating.

We undertake a review of the contributions of Professor William W. Cooper (University of Texas at Austin) in celebration of his 95th birthday. Professor Cooper has dedicated his life to the development of various methodologies and concepts in business education and research. He had made major contributions that were formative in launching the fields of linear programming, non-linear programming, goal programming, chance-constrained programming, manpower planning and multi-objective optimization. Later, he extended the technique of linear programming and non-linear programming into the development of Data Envelopment Analysis (DEA) which has been widely applied to performance analysis in public and private sectors. Professor Cooper has also developed important business-related concepts and research in areas such as management science, managerial accounting, economics, management, marketing, and auditing, all of which serve currently as pedagogical and research bases in modern business and business education along with public policy. Professor Cooper’s first published article was an economic analysis entitled “The Yardstick of Public Utility Regulation” that appeared in the Journal of Political Economy, June 1943 LI, no. 3, pp. 258–262. In fact, still earlier in 1938 he published a proceedings paper for the Committee on Capital Gains Taxation of the National Tax Association, which later became an article entitled “Costs, Prices and Profits – Accounting in the War Program,” and published in The Accounting Review, July, l945, val. 20, no. 3, pp. 267–308 along with E.L. Kohler. On August 31, 1945, the American Institute of Accountants (currently the American Institute of CPAs where CPAs stand for Certified Public Accountants) chose his article as the most significant contribution to accounting in the year. Since then, over a period spanning seven decades, Professor Cooper has now published 27 books and more than 520 articles in leading international journals. His research includes significant contributions to accounting, economics, management, public policy and other research areas1 as well as to Operations Research and Management Science (OR/MS), though we focus here only on his contributions in OR/MS. The structure of this review paper is organized as follows: Section 2, immediately following, classifies Professor Cooper’s contributions into six groups and discusses relationships among them. This section corresponds to publications listed in the references of this article. Section 3 discusses the historical path of his contributions from the development of L1 regression to DEA. The article on L1 regression was also the first research effort that identified the formulation, subsequently referred to as goal programming (GP). It is widely known that GP serves an important methodological basis for multi-objective optimization. This section describes how the development of GP influences the research of Professor Cooper. Section 4 reviews Cooper’s contributions in the area of DEA, to which he has devoted a major part of his research during the past three decades. Section 5 concludes the review and summarizes some of the key elements of Professor Cooper’s work.

Professor Cooper’s pioneering contributions to the fields of OR/MS have left an enduring legacy, making a particular impact on business education and research. He was instrumental in fashioning fundamental concepts and models in the initial stages of linear programming, non-linear programming, GP, CCP, manpower planning and multi-objective optimization. Later, he extended his contributions to linear programming and non-linear programming to launch the area of DEA which has been widely applied to performance analysis in the public and private sectors. Professor Cooper also developed critical business-related concepts and research areas within OR/MS, management, marketing, managerial accounting, auditing, economics, and public policy, all of which currently serve as pedagogical and research bases in modern business and business education. This review work has left an indelible imprint on many domains, and serves as a continuing foundation for investigations by researchers around the globe. In this celebration of his 95th birthday, it is appropriate to pay Professor William W. Cooper’s special tribute for his many advances that have lifted the realm of optimization and its applications to new levels, and that have helped to pave the foundation of modern analysis and applications.