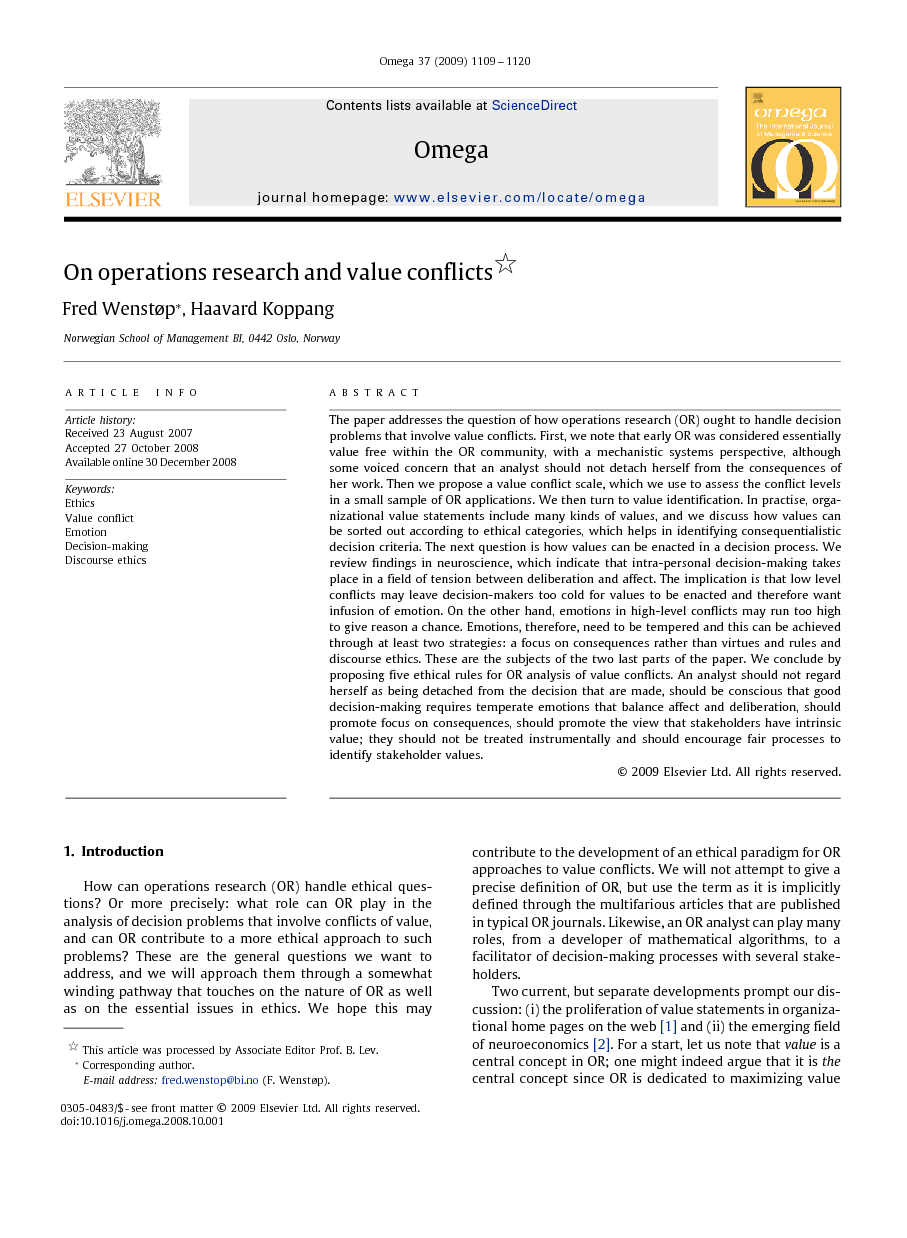 The paper addresses the question of how operations research (OR) ought to handle decision problems that involve value conflicts. First, we note that early OR was considered essentially value free within the OR community, with a mechanistic systems perspective, although some voiced concern that an analyst should not detach herself from the consequences of her work. Then we propose a value conflict scale, which we use to assess the conflict levels in a small sample of OR applications. We then turn to value identification. In practise, organizational value statements include many kinds of values, and we discuss how values can be sorted out according to ethical categories, which helps in identifying consequentialistic decision criteria. The next question is how values can be enacted in a decision process. We review findings in neuroscience, which indicate that intra-personal decision-making takes place in a field of tension between deliberation and affect. The implication is that low level conflicts may leave decision-makers too cold for values to be enacted and therefore want infusion of emotion. On the other hand, emotions in high-level conflicts may run too high to give reason a chance. Emotions, therefore, need to be tempered and this can be achieved through at least two strategies: a focus on consequences rather than virtues and rules and discourse ethics. These are the subjects of the two last parts of the paper. We conclude by proposing five ethical rules for OR analysis of value conflicts. An analyst should not regard herself as being detached from the decision that are made, should be conscious that good decision-making requires temperate emotions that balance affect and deliberation, should promote focus on consequences, should promote the view that stakeholders have intrinsic value; they should not be treated instrumentally and should encourage fair processes to identify stakeholder values.

How can operations research (OR) handle ethical questions? Or more precisely: what role can OR play in the analysis of decision problems that involve conflicts of value, and can OR contribute to a more ethical approach to such problems? These are the general questions we want to address, and we will approach them through a somewhat winding pathway that touches on the nature of OR as well as on the essential issues in ethics. We hope this may contribute to the development of an ethical paradigm for OR approaches to value conflicts. We will not attempt to give a precise definition of OR, but use the term as it is implicitly defined through the multifarious articles that are published in typical OR journals. Likewise, an OR analyst can play many roles, from a developer of mathematical algorithms, to a facilitator of decision-making processes with several stakeholders. Two current, but separate developments prompt our discussion: (i) the proliferation of value statements in organizational home pages on the web [1] and (ii) the emerging field of neuroeconomics [2]. For a start, let us note that value is a central concept in OR; one might indeed argue that it is the central concept since OR is dedicated to maximizing value in one form or other—be it one-dimensional maximization or multi-dimensional value trade-off. OR is, therefore, always confronted with the ethical issue of what is of value, and how to help the values be enacted in decision-making processes. Our basic tenet is that value statements and neuroeconomics are important pieces in the picture of an OR paradigm that incorporates ethics. Organizations today make increasing efforts at stating values on their web-based home pages [1] and [3]. Stated values are most frequently core values that describe the code of conduct. Examples are integrity, honesty and respect. But value statements contain other types of value as well, for instance values that are created by the organization and thus consequences of operations, such as return on investment (ROI). Value statements may also include values they want to protect, such as environmental values. Value statements in practise tend to be quite entangled; however, a better structure would make them better suited for decision making purposes. The other phenomenon is the emerging field of moral cognitive neuroscience [4] and its offshoot neuroeconomics [2] that provides us with new knowledge of intrapersonal decision processes, illuminating the roles of deliberation, affect and emotion. We adopt Damasio's definition of emotion as somatic changes created by some stimulus, as opposed to feeling which is created by the emotion in association with the stimulus [5]; one may observe emotions in a person, but feelings are private. The classical Cartesian view of decision-making as an entirely reasoned process free of emotional interference, where the decision-maker deliberates over the consequences of alternative actions and chooses the one that looks best, is now attack, and the evidence points in the direction that intra-personal decision-making takes place in a field of tension between the competing forces of affect and deliberation, where emotions play a central role and, therefore, must be included in any paradigm of ethical decision-making. The paper is structured as follows: 1. Original value paradigm of OR. We review the position of values in an early version of the OR paradigm, and note that it was from inside essentially value free with a mechanistic systems perspective, although some voiced concern that an analyst should not detach herself from the consequences of her work. 2. A value conflict scale. We propose a value conflict scale that benchmarks conflict level potential according to how intrinsic the values are and degree of stakeholder involvement. 3. Values in contemporary OR. We examine recent issues of the journal Omega and note that the value conflicts that are analysed are generally, but not exclusively, low level. 4. Value structuring. Organizational values can be classified into three categories—core values, created values, and protected values—that parallel the classical ethical categories of virtue, consequence and duty. 5. Rationality and enactment of values. Findings in neuroscience indicate that intra-personal decision-making takes place in a field of tension between deliberation and affect. The implication is that, for rational decision-making where consequences matter, low level conflicts leave decision-makers too coldly rational and therefore want infusion of emotion, while emotions in high-level conflicts need to be calmed. In other words: emotions need to be tempered [6]. 6. OR, consequentialism and ethics. We propose that as an ethical approach to decision problems, OR ought to promote consequentialism where consequences are evaluated through elicitation of emotion. 7. Discourse ethics. We describe discourse ethics as a recommendable approach under strong value conflicts to balance emotional engagement. 8. Conclusion. Finally, we propose a list of rules as elements of a paradigm for ethical OR analysis of value conflicts.