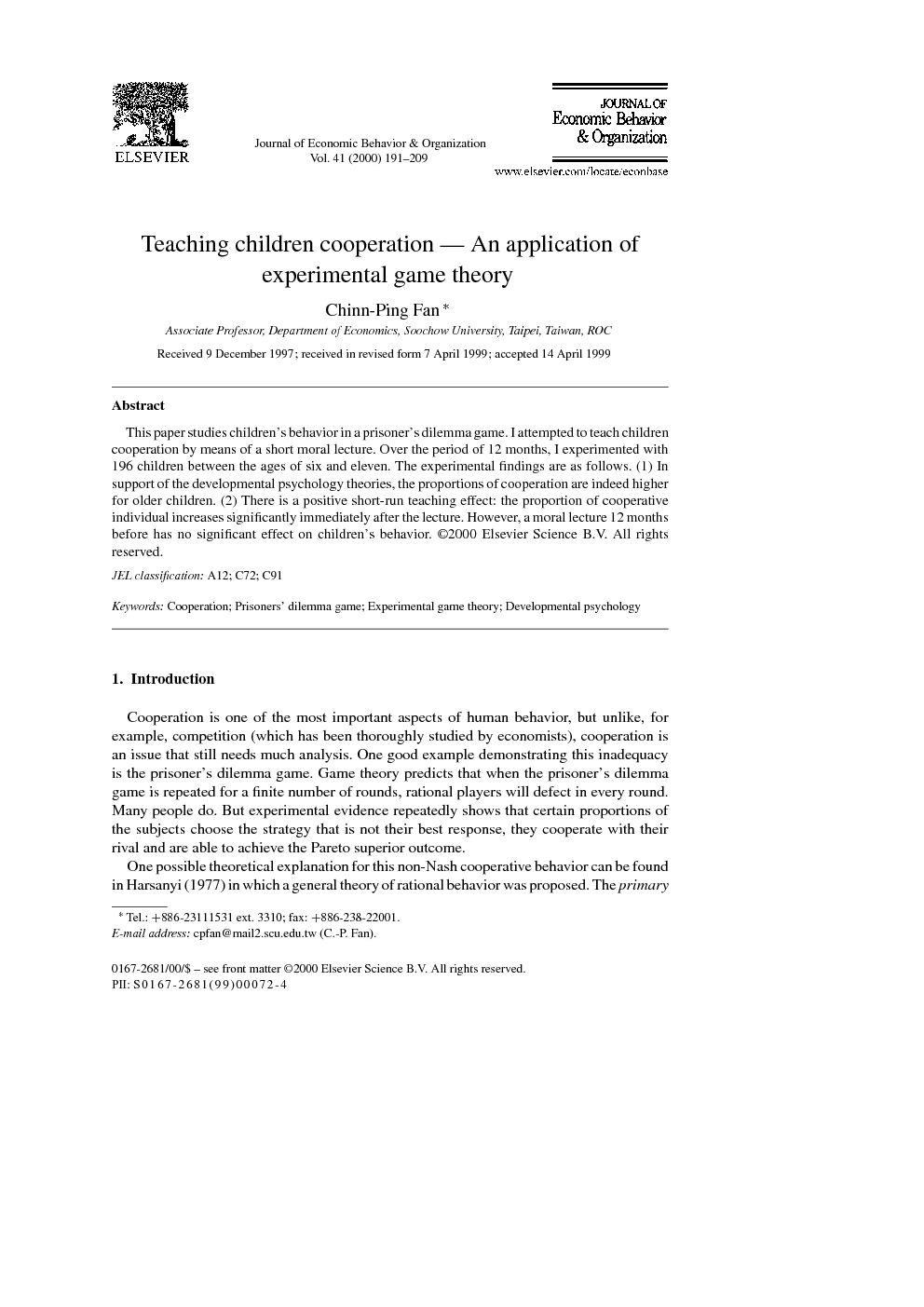 This paper studies children’s behavior in a prisoner’s dilemma game. I attempted to teach children cooperation by means of a short moral lecture. Over the period of 12 months, I experimented with 196 children between the ages of six and eleven. The experimental findings are as follows. (1) In support of the developmental psychology theories, the proportions of cooperation are indeed higher for older children. (2) There is a positive short-run teaching effect: the proportion of cooperative individual increases significantly immediately after the lecture. However, a moral lecture 12 months before has no significant effect on children’s behavior.

Cooperation is one of the most important aspects of human behavior, but unlike, for example, competition (which has been thoroughly studied by economists), cooperation is an issue that still needs much analysis. One good example demonstrating this inadequacy is the prisoner’s dilemma game. Game theory predicts that when the prisoner’s dilemma game is repeated for a finite number of rounds, rational players will defect in every round. Many people do. But experimental evidence repeatedly shows that certain proportions of the subjects choose the strategy that is not their best response, they cooperate with their rival and are able to achieve the Pareto superior outcome. One possible theoretical explanation for this non-Nash cooperative behavior can be found in Harsanyi (1977) in which a general theory of rational behavior was proposed. The primary definition of individual rationality refers to the widely used concept of maximizing individual expected utility; while the secondary definition of rationality (in the case of ethics) refers to maximizing the average utility level of all individuals in a society. Mathematically, the former definition can be transformed to the latter by adopting the equiprobability postulate, that is, agents maximize under ‘the fictitious assumption of having the same probability of occupying any possible social position’ (p. 632). Harsanyi called this the ‘equiprobability model of moral value judgments’ (p. 632). If people are rational under this definition, the Pareto superior cooperative outcome will be the equilibrium result of the prisoner’s dilemma game. Harsanyi distinguished these two rationality concepts by specifying different objective functions. However, the relationship between these two concepts was not discussed. It is also unclear which part of the human population possesses which kind of rationality concept. The field of developmental psychology may be helpful in this respect. Developmental psychology studies the processes of intellectual, emotional, and cognitive development in children. According to Kohlberg (1969), the development of human cognitive structure is the result of processes of interaction. He claims that: The direction of development of cognitive structure is toward greater equilibrium in this organism-environment interaction, i.e., of greater balance or reciprocity…In addition, however, social cognition always involves role-taking,i.e., awareness that the other is in some way like the self, and that the other knows or is responsive to the self in a system of complementary expectations….The direction of social or ego development is also toward an equilibrium or reciprocity between the self’s actions and those of others toward the self. In its generalized form this equilibrium is the end point or definer of morality, conceived as principles of justice, i.e., of reciprocity or equality1 (pp. 348–349). This theory, no doubt, provides a possible support for Harsanyi’s general theory of rational behavior. It also looks very much like a verbal description of a game theoretic solution concept, with the particular condition that cognition development would bring us to an equilibrium with the special property of equality or reciprocity. In a prisoner’s dilemma game, if people understand that the only candidate for equilibrium is reciprocal behavior, than it would be reasonable for them to choose cooperation over the Pareto-inferior outcome. Developmental psychology contains more than abstract theoretical statements. Beginning with the pioneering work of the great Piaget (1928), psychologists have observed and studied the behavior of children empirically. Among other results, it has been found that older children are more capable in understanding other people’s thoughts and feelings (Karniol, 1995). Their ability in making causal reasoning is more developed (Siegler and Thompson, 1998). Older children are more sensitive to the implicit demand for socially appropriate actions (Zarbatany et al., 1985). And the effect of negative emotions, for example, anger or anxiety, on cognition ability is stronger for younger children (Buengtal et al., 1995). One research technique frequently employed by psychologists is to elicit free responses to hypothetical questions from subjects. However, economists will point out that subjects may not be properly motivated to provide meaningful responses to the questions. A standard procedure for economic experiments is to design material incentives in order to elicit meaningful responses from subjects. Originating from the prisoner’s dilemma game and developmental psychology research, this paper examines the following propositions by means of a laboratory-controlled experiment with material incentives. First, older children are in the later stages of development and their behavior tends more to the reciprocal equilibrium. While younger children are more likely to end up in the Pareto inferior aggressive outcome. Therefore, I expect the proportion of cooperation, that is, reciprocal goodwill, to be higher for older children. Second, I want to study the possibility of teaching children cooperation in a prisoner’s dilemma environment. A short lecture explicitly explaining the logic favoring cooperation was designed as the treatment variable. Comparing children’s behavior before and after receiving this lecture, we could test whether this teaching significantly changed children’s behavior. Over the period of 12 months, I experimented with 196 children between the ages of six and eleven. The behavior of children is analyzed statistically to formally test the above propositions. Section 2 explains the experimental procedure and design. Section 3 reports the statistical analysis of the experiment data. Section 4 concludes this paper.

The experimental evidence of this research supports the general direction of developmental psychology theory. For our subjects, it was generally true that younger children were less cooperative. This finding also provides partial support for the ‘equipropability model’ of Harsanyi. I also found that the moral lecture had a positive short-term teaching effect: children were more cooperative immediately after receiving the lecture. However, the experience of receiving this lecture 12 months before had no significant effect on children’s behavior. The group reactions to the lecture treatment were different. There were generally more cooperative individuals after the moral lecture. In some classes, this resulted in more happily cooperative pairs, but for other classes, it led to one-sided, failed cooperation. I would say that the teaching was more successful for the former case. Another interesting finding was that the short-term teaching effect of the lecture treatment was smallest for the most cooperative group of children. It seems that there is a factor of aggressiveness that could not be reduced by our moral lectures. The purpose of this research is to test statistically for behavioral difference. Some of the findings of this experiment could be related to the developmental psychology literature. However, this current experiment was not designed to explain the reason for the existence of the behavioral difference. Many interesting issues are still left unanswered. For example, do younger children cooperate less because of their lack of reasoning ability or because the emotional response clouds their decision-making? Do they use simpler strategies and/or are they unable to put themselves into another person’s shoes? These questions are worthy of future research.