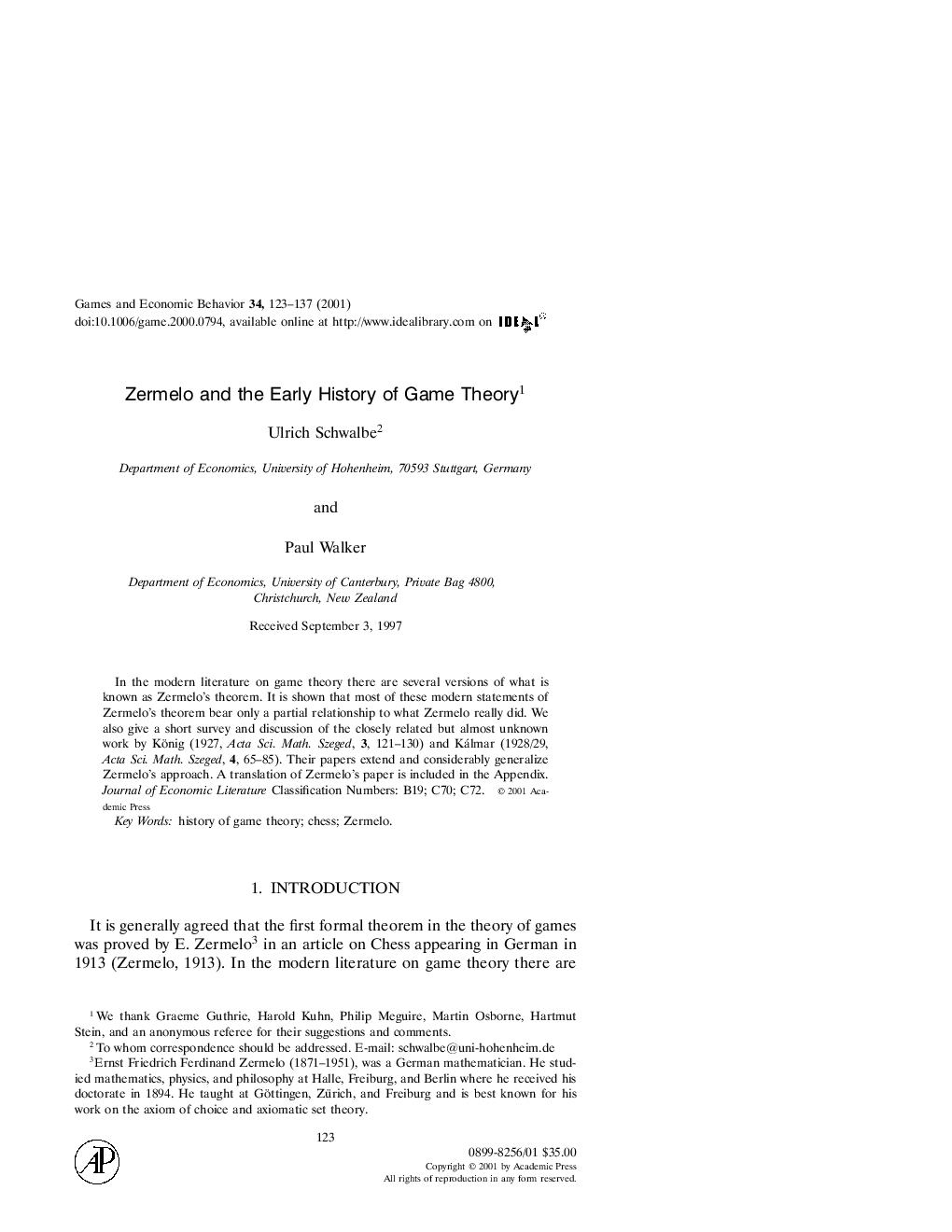 In the modern literature on game theory there are several versions of what is known as Zermelo's theorem. It is shown that most of these modern statements of Zermelo's theorem bear only a partial relationship to what Zermelo really did. We also give a short survey and discussion of the closely related but almost unknown work by König (1927, Acta Sci. Math. Szeged, 3, 121–130) and Kálmar (1928/29, Acta Sci. Math. Szeged, 4, 65–85). Their papers extend and considerably generalize Zermelo's approach. A translation of Zermelo's paper is included in the Appendix. Journal of Economic Literature Classification Numbers: B19; C70; C72.

It is generally agreed that the first formal theorem in the theory of games was proved by E. Zermelo3 in an article on Chess appearing in German in 1913 (Zermelo, 1913). In the modern literature on game theory there are many variant statements of this theorem. Some writers claim that Zermelo showed that Chess is determinate, e.g., Aumann (1989b, p. 1), Eichberger (1993, p. 9), or Hart (1992, p. 30): “In Chess, either White can force a win, or Black can force a win, or both sides can force a draw.” Others state more generalpropositions under the heading of Zermelo’s theorem, e.g., Mas-Colell et al. (1995, p. 272): “Every finite game of perfect information E has a pure strategy Nash equilibrium that can be derived by backward induction. Moreover, if no player has the same payoffs at any two terminal nodes, then there is a unique Nash equilibrium that can be derived in this manner.” Dimand and Dimand (1996, p. 107) claim that Zermelo showed that White cannot lose: “[I]n a finite game, there exists a strategy whereby a first mover    cannot lose, but it is not clear whether there is a strategy whereby the first mover can win.” In addition many authors claim that Zermelo’s method of proof was by backward induction, e.g., Binmore (1992, p. 32): “Zermelo used this method way back in 1912 to analyze Chess.It requires starting from the end of the game and then working backwards to its beginning. For this reason, the technique is sometimes called ‘backwards induction’.” Despite a growing interest in the history of game theory (e.g., Aumann, 1989a, Dimand and Dimand, 1996, 1997, Kuhn, 1997, Leonard, 1995, and Weintraub, 1992), confusion, at least in the English language literature, as to the contribution made by Zermelo and some of the other early game theorists seems to prevail. This problem may be due in part to a language barrier. Many of the early papers in game theory were not written in English and have not been translated. For example, to the best of our knowledge, there is no English version of Zermelo (1913). The same holds for the lesser known but related work by K¨onig (1927).4 A second paper related to that of Zermelo, by Kalm´ar (1928/29),5 has recently been translated (see Dimand and Dimand, 1997).6 The lack of an English translation may help to explain the apparent confusion in the modern literature as to what Zermelo’s theorem states and the method of proof employed. It appears that there is only one accurate summary of Zermelo’s paper. It was published in a book on the history of game theory by Vorob’ev (1975) unfortunately only available in the original Russian version or in a German translation. In this note, we attempt to shed some light on the original statement and proof of Zermelo’s theorem, and on the closely related work of K¨onig and Kalm´ar. This will clarify the relationship between Zermelo’s result and the modern statements thereof. It is shown that most of the subsequent statements of Zermelo’s theorem are to some degree incorrect—only the statement on the determinateness of Chess comes close to what Zermelo did, but even this covers only a minor part of his paper. A translation of Zermelo’s paper is included in the Appendix

This short survey of the work of Zermelo, K¨onig, and Kalm´ar shows that these mathematicians were dealing with what we would now call two-person zero-sum games with perfect information. The common starting point for their analysis was the concept of a winning position, defined in a precise mathematical way: If a player is in a winning position, then he can always force a win no matter what strategy the other player may employ. They then sought an answer to the question: Given that a player is in a winning position, is there an upper bound on the number of moves in which he can force a win? Or, if he is in a losing position, how long can a loss be postponed? Thus, the problems of strategic interaction and equilibrium were not concerns for Zermelo, K¨onig, and Kalm´ar. They did not ask the question: How should a player behave to achieve a good result? This was the main question von Neumann asked in his paper “Zur Theorie der Gesellschaftsspiele (1928) (“On the Theory of Strategic Games”). In contrast to the work of Zermelo, K¨onig, and Kalm´ar, von Neumann’s main concerns were the strategic interaction between players and the concept of an equilibrium. These two ideas have become the building blocks of modern noncooperative game theory. The concerns of Zermelo, K¨onig, and Kalm´ar were answered at a very high level of generality in the paper by Kalm´ar and thus have not generated an ongoing research agenda.