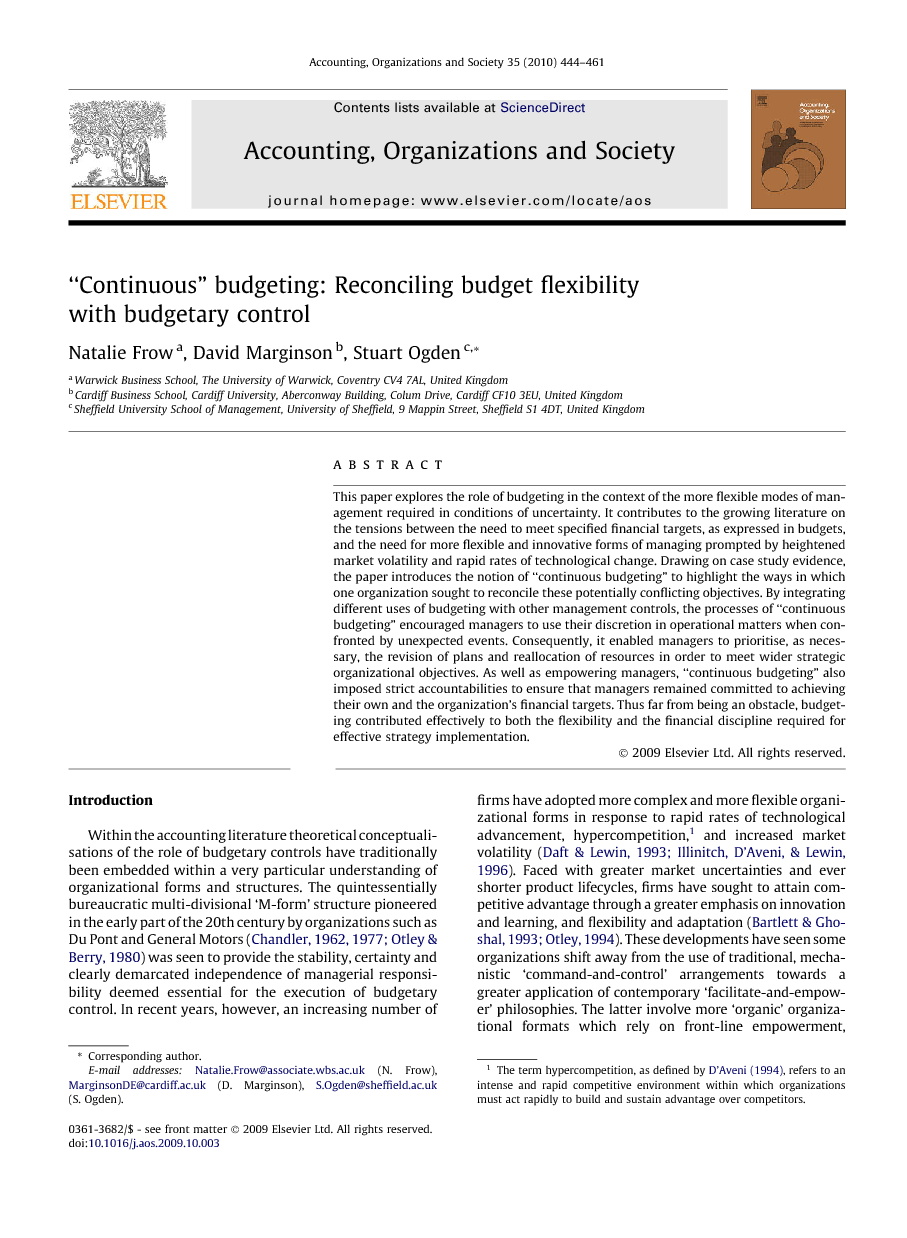 This paper explores the role of budgeting in the context of the more flexible modes of management required in conditions of uncertainty. It contributes to the growing literature on the tensions between the need to meet specified financial targets, as expressed in budgets, and the need for more flexible and innovative forms of managing prompted by heightened market volatility and rapid rates of technological change. Drawing on case study evidence, the paper introduces the notion of “continuous budgeting” to highlight the ways in which one organization sought to reconcile these potentially conflicting objectives. By integrating different uses of budgeting with other management controls, the processes of “continuous budgeting” encouraged managers to use their discretion in operational matters when confronted by unexpected events. Consequently, it enabled managers to prioritise, as necessary, the revision of plans and reallocation of resources in order to meet wider strategic organizational objectives. As well as empowering managers, “continuous budgeting” also imposed strict accountabilities to ensure that managers remained committed to achieving their own and the organization’s financial targets. Thus far from being an obstacle, budgeting contributed effectively to both the flexibility and the financial discipline required for effective strategy implementation.

Within the accounting literature theoretical conceptualisations of the role of budgetary controls have traditionally been embedded within a very particular understanding of organizational forms and structures. The quintessentially bureaucratic multi-divisional ‘M-form’ structure pioneered in the early part of the 20th century by organizations such as Du Pont and General Motors (Chandler, 1962, Chandler, 1977 and Otley and Berry, 1980) was seen to provide the stability, certainty and clearly demarcated independence of managerial responsibility deemed essential for the execution of budgetary control. In recent years, however, an increasing number of firms have adopted more complex and more flexible organizational forms in response to rapid rates of technological advancement, hypercompetition,1 and increased market volatility (Daft and Lewin, 1993 and Illinitch et al., 1996). Faced with greater market uncertainties and ever shorter product lifecycles, firms have sought to attain competitive advantage through a greater emphasis on innovation and learning, and flexibility and adaptation (Bartlett and Ghoshal, 1993 and Otley, 1994). These developments have seen some organizations shift away from the use of traditional, mechanistic ‘command-and-control’ arrangements towards a greater application of contemporary ‘facilitate-and-empower’ philosophies. The latter involve more ‘organic’ organizational formats which rely on front-line empowerment, interdependence of units, flatter hierarchies, horizontal communication, collaborative internal networks and multi-functional project teams (Bartlett and Ghoshal, 1993, Chenhall, 2008, Euske et al., 1993, Ezzamel et al., 1994 and Ruigrok and Achtenhagen, 1999). Although the extent of these changes may vary,2 the operation of new organizational practices has been seen as somewhat incompatible with ‘traditional’ budgeting’s hierarchical command-and-control orientation (Bunce et al., 1995, Chapman, 1997, Hansen et al., 2003, Hope and Fraser, 1997, Hope and Fraser, 2000, Hope and Fraser, 2003, Merchant, 1987, Neely et al., 2001, Otley, 1994, Otley, 1999 and Scott and Tiessen, 1999). Annually determined budgetary targets, and the delineated responsibilities associated with them, are seen to limit the scope of empowered managers to operate flexibly, militate against team-working within and between departments, inhibit innovative responses to unforeseen contingencies, and stifle the creativity required for innovation and learning to occur. These criticisms of budgets have led to debates as to whether budgeting has any future in management control systems (see Hansen et al., 2003 and Otley, 2006). Hope and Fraser (2003), for example, have argued that budgets are increasingly inappropriate for organizations desiring to achieve high performance in competitive conditions, and should be abandoned. Nevertheless, notwithstanding their limitations, budgeting practices are still regarded as an organizational imperative if costs are to be controlled and predicted financial performance achieved. Otley has argued that the budgeting process “still represents the central co-ordinating mechanism (often the only co-ordinating mechanism) that most organizations have” and cautions that budgets should not be “discarded lightly” (Otley, 1999, p. 371). This is just as likely to apply to organizations facing market conditions which require a capability for a high rate of strategic adaptation and flexibility as they too will encounter competitive pressures to ensure ‘tight’ cost control. This paper explores the tensions between the use of budgets and the development of more flexible modes of management. We draw on a case study of one organization, which we have called Astoria, to illuminate the ways in which managers combine budgeting with other management controls to meet the potentially competing objectives of flexibility and adaptation required for strategy implementation on the one hand, and the achievement of specified financial targets on the other. Our purpose is to analyse how Astoria understood, and gave effect to, the notion that managing strategic uncertainties is an organizational process that is susceptible to intervention and control on a sustained basis. In the course of this, we have examined both the formal provisions for management control as well as managers’ practices, and focused particularly on processes we have called “continuous budgeting”. “Continuous budgeting” seeks to avoid the inherently restrictive nature of budgetary control by enabling managers, when confronted by unexpected events, such as problems with the preparation and launch of new products, to consider, and if necessary implement, a revision of plans and reallocation of resources in pursuit of strategic organizational objectives. At the same time “continuous budgeting” firmly directs managers’ accountabilities over their use of discretion in operational matters towards the achievement of the organization’s financial targets. Given the tensions likely to arise from pursuing such diverse objectives, a key aspect of our study involves considering how managers themselves ‘cope’ with the demands of reconciling the individualistic nature of ‘traditional’ budgetary control requirements with organizational imperatives for a more ‘global’ focus in the management of strategic adaptation. The remainder of the paper is structured as follows: the next section presents the framework for analysing the case study evidence, and specifies the particular research questions that we seek to address; the third section introduces the case study; and the following three sections provide an analysis of the case study data. The final section discusses some of the themes raised by the case study and presents some conclusions.

Although confined to one organization, our study offers an example of how budgets may be deployed as an integral component of a management control system in ways which contribute both to financial discipline in terms of achieving pre-determined set targets and to managers’ capability for rapid and creative response to unforeseen contingencies. While criticisms of ‘traditional’ budgeting suggest that it is entirely unsuitable for organizations faced with conditions of uncertainty and highly competitive environments, our evidence demonstrates that the abandonment of budgeting is not the only, or necessarily the best, option for organizations to pursue. In drawing such a conclusion, however, it is important to point to the ways in which the experience of ‘continuous’ budgeting at Astoria, particularly the way in which it is embedded in organizational actions, is different to ‘traditional’ budgeting. Firstly, ‘continuous’ budgeting is no longer the only, nor even the primary, instrument of management control. It now operates as an integral component of a more broad based management control system. While budgeting’s usefulness lies in its capacity to mobilise financial discipline both in terms of cost control and meeting overall profit targets, it has to be integrated with other control processes if managers are to be able to respond flexibly to unexpected events. Secondly, ‘continuous’ budgeting does not operate exclusively as a diagnostic control but may also be used ‘interactively’. These informational and coercive aspects of budgeting were also evident in the exercise of Astoria’s ‘belief systems’ and ‘boundary systems’. Thirdly, the integration of these roles with other dimensions of the control system suggests that budgeting is now better understood as being involved with processes of strategic implementation rather than the more narrow focus of simply ensuring pre-set budgetary targets are actually achieved. A fourth point of comparison concerns the extent of the discretion given to managers to act in the organization’s interest when determining what course of action is most appropriate in any given set of circumstances. This is much broader than is normally envisaged under traditional budgeting, and its exercise cannot be legislated for. Rather, it requires, and promotes, the mobilisation of managers’ continuous engagement with and commitment to the organization’s strategic direction and priorities. While this is much more difficult to achieve than securing compliance with the application of pre-determined decision rules, it does avoid, if successful, some of the more dysfunctional behaviours associated with the operation of traditional budgeting. Finally, having discussed differences, it is important to emphasise that the role of targets and the modes of accountability present in traditional budgeting remain intact in ‘continuous’ budgeting. Further studies are clearly required to explore how other organizations facing similar imperatives and circumstances to those of Astoria have approached the competing demands of control and flexibility in their budgetary practices. There is a great deal of specificity in Astoria’s control system practice, and it is important to acknowledge a number of contingent factors that were integral to sustaining the control framework’s successful functioning: the acceptance of the degree of interdependence between managers’ responsibilities; the quality of managers’ personal relations, particularly their willingness to co-operate and to be helpful to each other; the effectiveness of communications between managers; and the extent to which the ‘Quality’ tools functioned as a known and predictable basis for the discussion of problems and negotiation of solutions. Nevertheless our evidence demonstrates that budgeting under conditions of uncertainty may contribute effectively to management control when suitably supported by other organizational resources and practices. Exploring other examples of organizational control practices that are similar to those deployed at Astoria will help further our understanding of how the role of budgets is changing and, more particularly, the extent to which it can now be regarded as focussed on issues of strategic implementation.