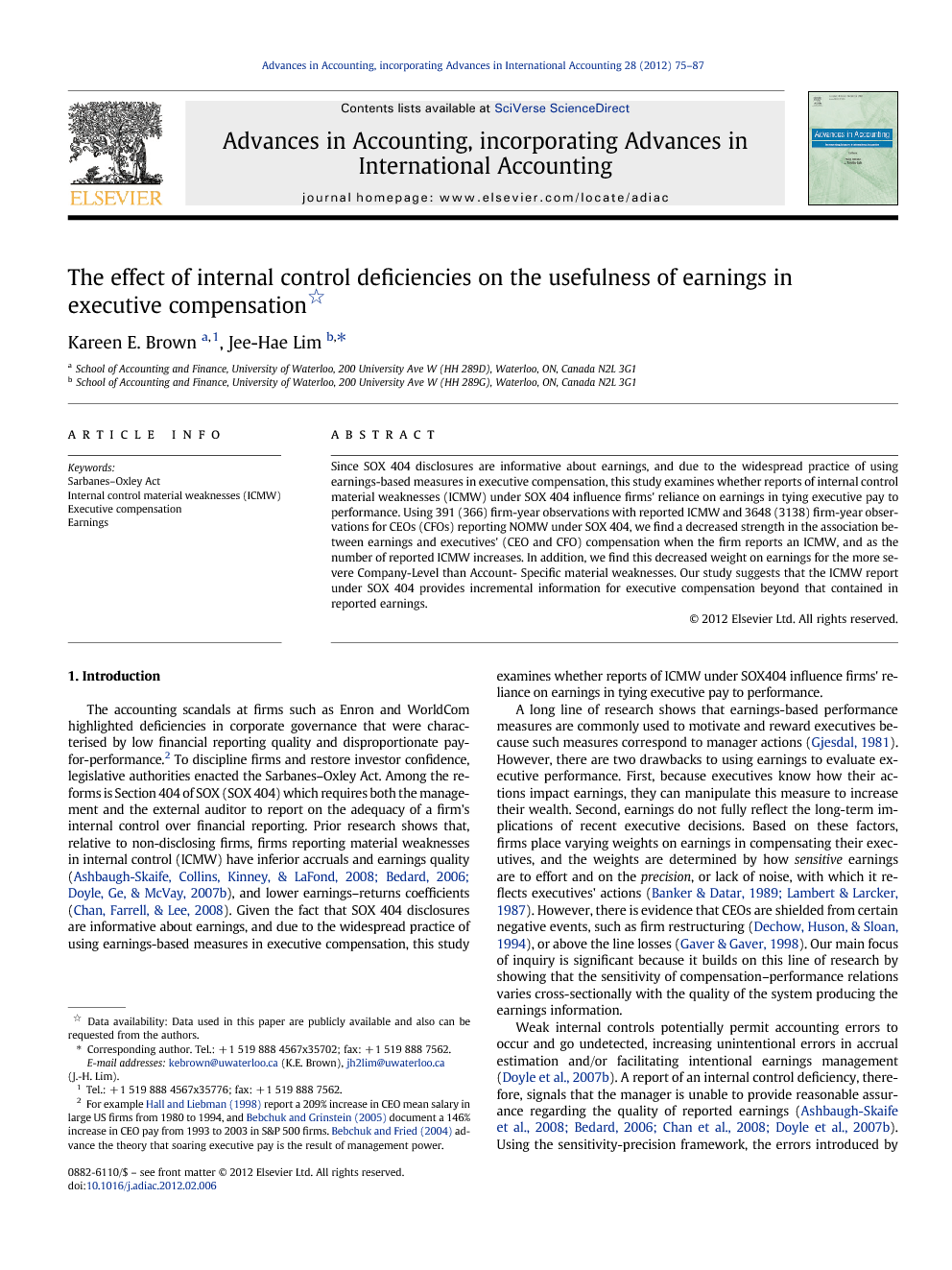 Since SOX 404 disclosures are informative about earnings, and due to the widespread practice of using earnings-based measures in executive compensation, this study examines whether reports of internal control material weaknesses (ICMW) under SOX 404 influence firms' reliance on earnings in tying executive pay to performance. Using 391 (366) firm-year observations with reported ICMW and 3648 (3138) firm-year observations for CEOs (CFOs) reporting NOMW under SOX 404, we find a decreased strength in the association between earnings and executives' (CEO and CFO) compensation when the firm reports an ICMW, and as the number of reported ICMW increases. In addition, we find this decreased weight on earnings for the more severe Company-Level than Account- Specific material weaknesses. Our study suggests that the ICMW report under SOX 404 provides incremental information for executive compensation beyond that contained in reported earnings.

We examine whether disclosing an internal control deficiency under Section 404 of the Sarbanes–Oxley Act influences the usefulness of accounting earnings in executive compensation contracts. We argue that when firms disclose internal control deficiencies, earnings are less useful measures of executive performance than are the earnings of non-reporting firms. Using a sample of executive firm-years with and without reported ICMW under SOX 404, we find less strength in the relationship between executive pay and accounting measures of performance for CEOs and CFOs of firms reporting internal control deficiencies. Our results hold after controlling for earnings persistence, discretionary accrual use, governance oversight and controls for endogeneity bias. Therefore, our findings suggest that the ICMW report under SOX 404provides incremental information for executive compensation beyond that contained in reported earnings. We further analyze the effect of the type of ICMW (Company-Level vs. Account-Specific), as defined by Doyle et al., 2007a and Doyle et al., 2007b, on the executive earnings–compensation relation. The results show that firms place less weight on earnings for compensation for Company-Level weaknesses. Our study is subject to three caveats. First, we use the disclosure of ICMW under Section 404 to proxy for the actual presence of an internal control problem. Section 404 does not mandate that firms improve their internal controls; rather it suggests that firms devote adequate resources and attention to the maintenance of effective controls. Thus, to the extent that there is a systematic bias in the choice to identify and disclose ICMW, our sample may not represent the true underlying population of firms with ICMW problems. Second, the sample used in this study also suffers from a potential survivorship bias problem. Because the empirical test requires compensation data from ExecuComp, small firms or those with very low executive compensation may not have made the final sample used in empirical tests, biasing the results in favour of the hypotheses. Third, CFOs are only included in the ExecuComp data, and in our sample, if they are among the top five highest-paid executives of the firm. To the extent that CFO pay reflects their importance within a firm, the results may not apply to firms whose CFOs are not among the five highest-paid executives. Notwithstanding these caveats, our findings have implications for practitioners and researchers. With the potential to make a direct impact on practice, the findings support the notion put forward by the SEC: that firms' internal control environment is important for contracting and decision making. In particular, our paper provides further evidence that the quality of a firm's reporting system is useful for compensation contracting.