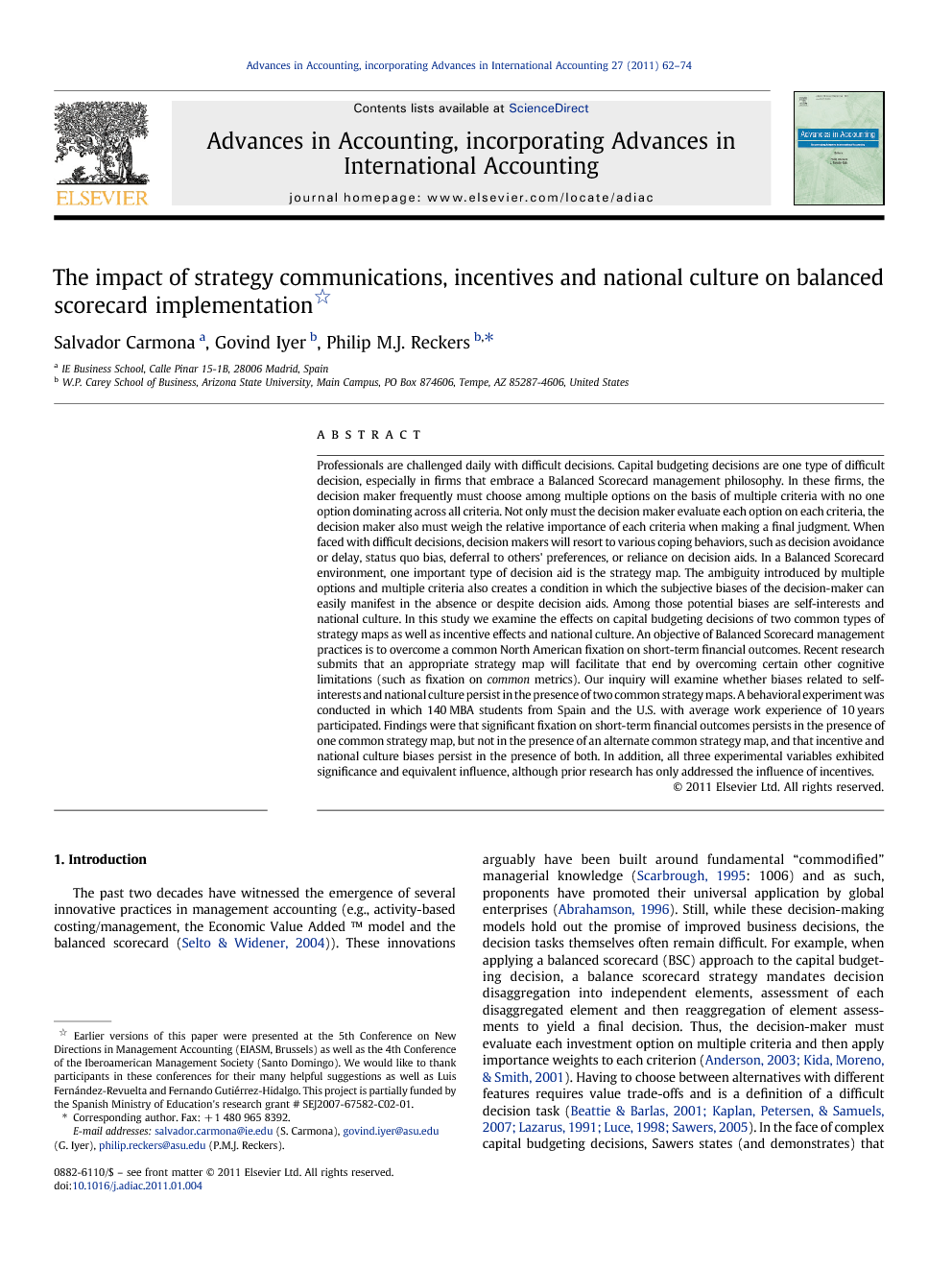 Professionals are challenged daily with difficult decisions. Capital budgeting decisions are one type of difficult decision, especially in firms that embrace a Balanced Scorecard management philosophy. In these firms, the decision maker frequently must choose among multiple options on the basis of multiple criteria with no one option dominating across all criteria. Not only must the decision maker evaluate each option on each criteria, the decision maker also must weigh the relative importance of each criteria when making a final judgment. When faced with difficult decisions, decision makers will resort to various coping behaviors, such as decision avoidance or delay, status quo bias, deferral to others' preferences, or reliance on decision aids. In a Balanced Scorecard environment, one important type of decision aid is the strategy map. The ambiguity introduced by multiple options and multiple criteria also creates a condition in which the subjective biases of the decision-maker can easily manifest in the absence or despite decision aids. Among those potential biases are self-interests and national culture. In this study we examine the effects on capital budgeting decisions of two common types of strategy maps as well as incentive effects and national culture. An objective of Balanced Scorecard management practices is to overcome a common North American fixation on short-term financial outcomes. Recent research submits that an appropriate strategy map will facilitate that end by overcoming certain other cognitive limitations (such as fixation on common metrics). Our inquiry will examine whether biases related to self-interests and national culture persist in the presence of two common strategy maps. A behavioral experiment was conducted in which 140 MBA students from Spain and the U.S. with average work experience of 10 years participated. Findings were that significant fixation on short-term financial outcomes persists in the presence of one common strategy map, but not in the presence of an alternate common strategy map, and that incentive and national culture biases persist in the presence of both. In addition, all three experimental variables exhibited significance and equivalent influence, although prior research has only addressed the influence of incentives.

The past two decades have witnessed the emergence of several innovative practices in management accounting (e.g., activity-based costing/management, the Economic Value Added ™ model and the balanced scorecard (Selto & Widener, 2004)). These innovations arguably have been built around fundamental “commodified” managerial knowledge (Scarbrough, 1995: 1006) and as such, proponents have promoted their universal application by global enterprises (Abrahamson, 1996). Still, while these decision-making models hold out the promise of improved business decisions, the decision tasks themselves often remain difficult. For example, when applying a balanced scorecard (BSC) approach to the capital budgeting decision, a balance scorecard strategy mandates decision disaggregation into independent elements, assessment of each disaggregated element and then reaggregation of element assessments to yield a final decision. Thus, the decision-maker must evaluate each investment option on multiple criteria and then apply importance weights to each criterion (Anderson, 2003 and Kida et al., 2001). Having to choose between alternatives with different features requires value trade-offs and is a definition of a difficult decision task (Beattie and Barlas, 2001, Kaplan et al., 2007, Lazarus, 1991, Luce, 1998 and Sawers, 2005). In the face of complex capital budgeting decisions, Sawers states (and demonstrates) that managers can be expected to adopt selective coping strategies, such as choice avoidance, decision delay, status quo bias, deferral to others' preferences, and/or adoption of decision aids. A nearly universal decision aid found in applications of a balance scorecard management strategy is the strategy-map. However, this is an area in which there has been a dearth of research. There is not one universal strategy map, but rather a family of strategy maps exists (Peterson & Samuels, 2007). Thus, while Banker, Chang, and Pizzini (2004) suggest that strategy maps hold the potential to mitigate selected common biases or cognitive limitations, it is not self-evident that all common strategy maps universally do so. Different strategy maps do not necessarily communicate the same message and goal priorities or exert the same influence. In this study we examine the influence of two widely-accepted strategy map variations. Recent BSC research (e.g., Libby et al., 2004 and Roberts et al., 2004) also has addressed the importance of choosing the “right” performance measures and the need for congruence between organizational goals and organizational reward structures. We will extend this research by examining the influence of congruence (or lack thereof) of organizational reward structures and organizational goals variously represented by two common strategy maps (i.e., their interactions). Our research is consistent with that of Ittner et al., 2003 and HassabElnaby et al., 2005 who have previously examined the performance consequences of using innovative management techniques, and the conditions leading to abandonment of such techniques. “Many uncertainties remain about why innovations similar to the BSC are successfully implemented; and why such innovations do not ‘work’ for particular organizations Luft (2005: 2).” Specifically, we still have much to learn about the extent to which the implementation success rates of these techniques may be affected by micro-level factors such as how innovative strategies are communicated to employees (e.g., via various strategy maps; Vera-Munoz, Shackell, & Buehner, 2007) and macro-level factors such as national culture (Hanniffa and Cooke, 2005 and Williams and Seaman, 2001). Our interest in national culture is driven by our awareness that the BSC was initially conceived as a remedy for a North American “culture” problem: a fixation on short-term financial outcomes (Kaplan and Norton, 1992, Kaplan and Norton, 1996a and Kaplan and Norton, 1996b). Nowhere in the world is the owner/manager “agency” challenge as great as in the U.S. because nowhere in the world do capital markets rely so heavily on stock-ownership by everyday members of society as in the U. S. And, nowhere in the world have corporate managers been so highly motivated to achieve short-term stock appreciation. If “culture” was the perceived problem, it is surprising that so little research to date has been done with respect to the effect of national culture on the implementation success (i.e., organizational acceptance) of the BSC. In this manner, we aim to contribute to prior research examining the underpinnings of national culture in management accounting and control systems (see Harrison & McKinnon, 1999). Our examination of individuals belonging to different national cultures focuses on North-America and Spain. Specifically, the US is a highly individualistic culture with emphasis on immediacy whereas Spain is a highly “collectivist” society exhibit a more long-run focus (Hofstede, 1980 and Hofstede, 1997). As such, while the U.S. culture supports high individual rewards, Spain does less so. While the US culture admires the aggressive individual with a focus on his/her own near-term self-interests, Spain more admires team players acting in the long term interests of the company as a whole. Therefore, our US and Spanish subjects culturally differ in their perceptions about the role of individuals in groups as well as about their time perspective over organizations. These cultural traits, we submit, may influence individuals at the time of making complex organizational decisions such as capital budgeting. By doing this, we also expect to add to prior research on the relationship between national culture and management control systems, which has overwhelmingly focused on North-American and Asian countries. Although Hofstede's typology is not free of criticisms (e.g., McSweeney, 2002), Harrison and McKinnon (1999: 485) noted: “Hofstede's work … [his] typology, together with the country's rankings contained in his work, has been extensively, almost exclusively, adopted by cross-cultural researchers in management control systems in recent years.”