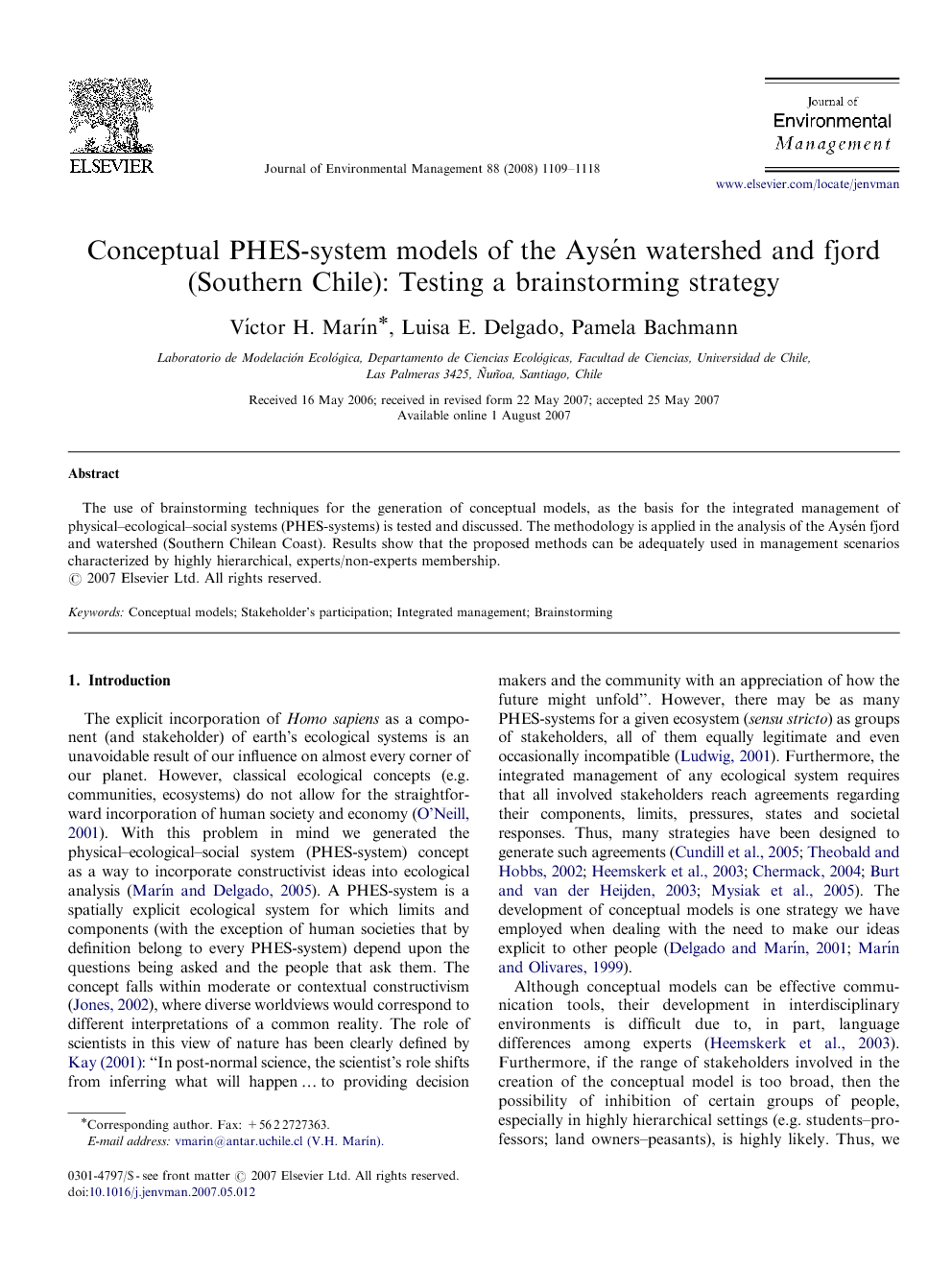 The use of brainstorming techniques for the generation of conceptual models, as the basis for the integrated management of physical–ecological–social systems (PHES-systems) is tested and discussed. The methodology is applied in the analysis of the Aysén fjord and watershed (Southern Chilean Coast). Results show that the proposed methods can be adequately used in management scenarios characterized by highly hierarchical, experts/non-experts membership.

The explicit incorporation of Homo sapiens as a component (and stakeholder) of earth's ecological systems is an unavoidable result of our influence on almost every corner of our planet. However, classical ecological concepts (e.g. communities, ecosystems) do not allow for the straightforward incorporation of human society and economy (O’Neill, 2001). With this problem in mind we generated the physical–ecological–social system (PHES-system) concept as a way to incorporate constructivist ideas into ecological analysis (Marín and Delgado, 2005). A PHES-system is a spatially explicit ecological system for which limits and components (with the exception of human societies that by definition belong to every PHES-system) depend upon the questions being asked and the people that ask them. The concept falls within moderate or contextual constructivism (Jones, 2002), where diverse worldviews would correspond to different interpretations of a common reality. The role of scientists in this view of nature has been clearly defined by Kay (2001): “In post-normal science, the scientist's role shifts from inferring what will happen … to providing decision makers and the community with an appreciation of how the future might unfold”. However, there may be as many PHES-systems for a given ecosystem (sensu stricto) as groups of stakeholders, all of them equally legitimate and even occasionally incompatible (Ludwig, 2001). Furthermore, the integrated management of any ecological system requires that all involved stakeholders reach agreements regarding their components, limits, pressures, states and societal responses. Thus, many strategies have been designed to generate such agreements (Cundill et al., 2005; Theobald and Hobbs, 2002; Heemskerk et al., 2003; Chermack, 2004; Burt and van der Heijden, 2003; Mysiak et al., 2005). The development of conceptual models is one strategy we have employed when dealing with the need to make our ideas explicit to other people (Delgado and Marín, 2001; Marín and Olivares, 1999). Although conceptual models can be effective communication tools, their development in interdisciplinary environments is difficult due to, in part, language differences among experts (Heemskerk et al., 2003). Furthermore, if the range of stakeholders involved in the creation of the conceptual model is too broad, then the possibility of inhibition of certain groups of people, especially in highly hierarchical settings (e.g. students–professors; land owners–peasants), is highly likely. Thus, we felt that a more uncritical environment should be engendered prior to the generation of conceptual models. In such an environment, the focus should be on reducing inhibitions, so that people express their points of view in a more open manner. Nicolson et al. (2002), working to develop heuristics for interdisciplinary modeling, point out that the task of communicating with stakeholders is vastly underrepresented in many scientific projects. The strategy we have developed has been oriented to solve this problem and to go one step beyond. That is, to incorporate stakeholders within the modeling team. This is rather timely, because as pointed out by Freudenberg and Alario (1999): real world decisions involve not only facts but a combination of facts, values and blind spots. Furthermore, the incorporation of stakeholders within the modeling group increases their awareness of the ecological conditions upon which they exist. This contributes to the integrated management of ecological systems. Thus, we need to widen our modeling teams to allow the interaction of experts and non-experts. In what follows we describe an academic exercise designed with the purpose of testing the strategy we have devised to develop conceptual models of a watershed-fjord system in Southern Chile (Aysén). Participants for this exercise belonged to local government organizations related to environmental issues, undergraduate and postgraduate students from environmental curricula and university professors.

In an article published in 2001, Ludwig (2001) has stated that “The management era is over”. The main meaning of this assertion is that it is not possible to keep solving complex environmental problems using the sole advice of experts. Somehow, stakeholders have to become involved, not only in receiving advice, but in every aspect of the integrated management of ecological systems. However, despite the participation rhetoric that may be found in many articles, there are not many innovative proposals on how to incorporate stakeholders in integrated management from the beginning. In this paper we have shown the testing of a method, founded on the use of brainstorming techniques, to generate conceptual models that may serve as the basis of management. Heemskerk et al. (2003) had already proposed that conceptual models are promising tools for communicating among disciplines. We have moved the idea one step further and proposed that they can be used as tools for reaching the consensus necessary for the integrated management of ecological systems. Our results show that using brainstorming techniques as the first step of modeling allows for the interaction of people within highly hierarchical settings. The emphasis on withholding judgment of ideas makes this a rather promising methodology, especially when dealing with complex issues where different stakeholders (belonging to different segments of society, represented in this case by professors and students) have to reach agreements. If integrated management requires the participation of all stakeholders, then we have to generate the conditions for a peaceful exchange of ideas. This is rather timely, especially in Latin America where more than 90% of the regional economy is based upon the exploitation of natural resources (Marín and Delgado, 2005). Our analysis of Aysén fjord and watershed showed us that contrary to our initial perception, people do not think or plan to recover the forests once burned during last century, and they do not have problems incorporating political components within a natural scientist's conceptual model. Basically, we as scientists are the ones requiring a shift of perception from a technocratic view of the world to a post-normal perspective. What do we loose? As clearly stated by Lee (1993), we loose our power quota; our position as the only people that understands ecological systems, their dynamics, future behavior and responses to human manipulation. What do we gain? a re-enchantment among non-scientists about the role that scientific knowledge may have in their day-to-day life and the integration of local knowledge into mainstream management science.